Nearly a year from when it was originally meant to launch, the gates of Avengers Campus are finally opening at Disney California Adventure. We got a special preview of the long-awaited arrival of the Marvel-themed land, set to open on June 4. And the arrival of the MCU into Disney Parks is one that fans of Marvel won’t want to miss. Even though it has a few bugs they need to work out. (No shade intended, Spidey). 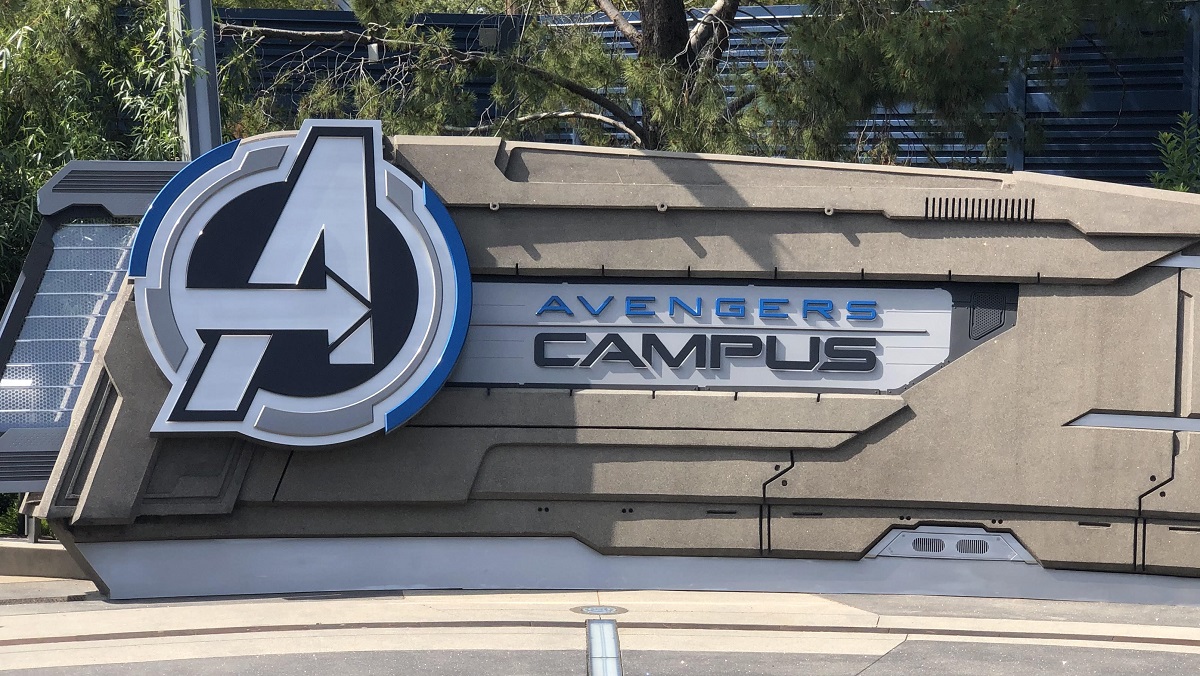 First off, for anyone hoping this is another Star Wars: Galaxy’s Edge in terms of scale and immersion, you might want to keep those expectations in check. The main reason is size. Avengers Campus is a mere four acres, as opposed to the fourteen acres of Galaxy’s Edge. They only have the footprint of the relatively tiny former A Bug’s Land to work with. In this sense, it just can’t compete with the planet Batuu. Once you realize this is not the same in terms of scale, you’ll have a much better time enjoying the land for what it does offer. Plenty for a land its size. 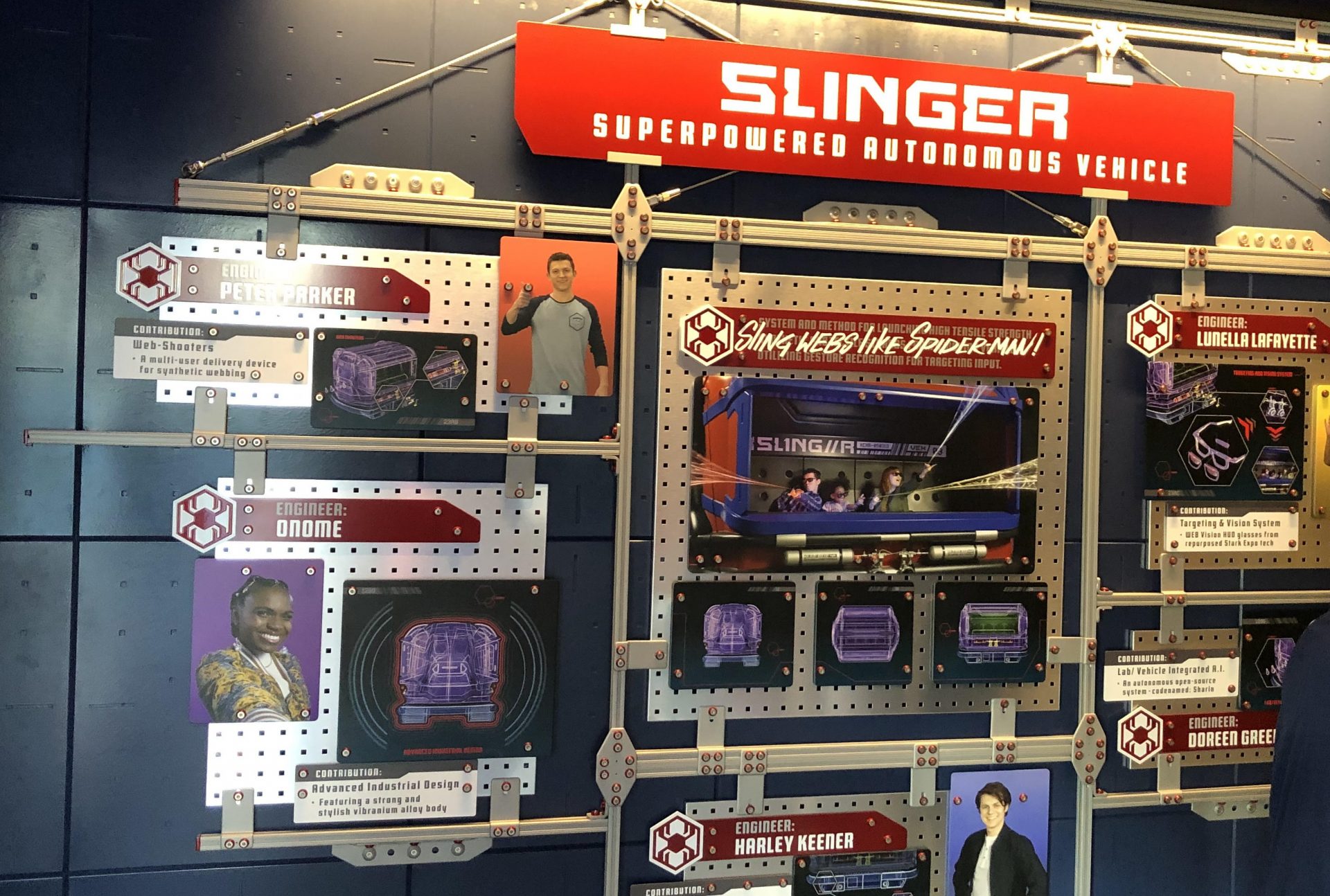 Right now, there is only one new attraction in the land. And that is WEB-SLINGERS: A Spider-Man Adventure. And we are happy to report that this 3D ride is indeed a blast. It’s essentially a modern, more tricked-out version of Toy Story: Midway Mania. Only this time, created with new technology and a lot more fun. The conceit of the ride has you walking into Tony Stark’s WEB Building. Which stands for “World Engineering Brigade.” It’s a place where young minds, like Peter Parker, get free rein to create new technology. When you walk into the line queue, you see the other young engineers are a young lady from Wakanda, and Harley Keener from Iron Man 3.

The mission at WEB has park guests helping Spidey ( portrayed by Tom Holland) capture an army of mini Spider-Bots of his own creation. They’ve multiplied and become a danger, so the mission is to stop them before they attack the rest of the campus. The brief yet super-fun ride has you traveling through different areas of the campus where the bots have run amok. These include the Pym Test Kitchen and the Collector’s fortress from Mission: BREAKOUT! It’s nice how the attraction ties the whole land together. 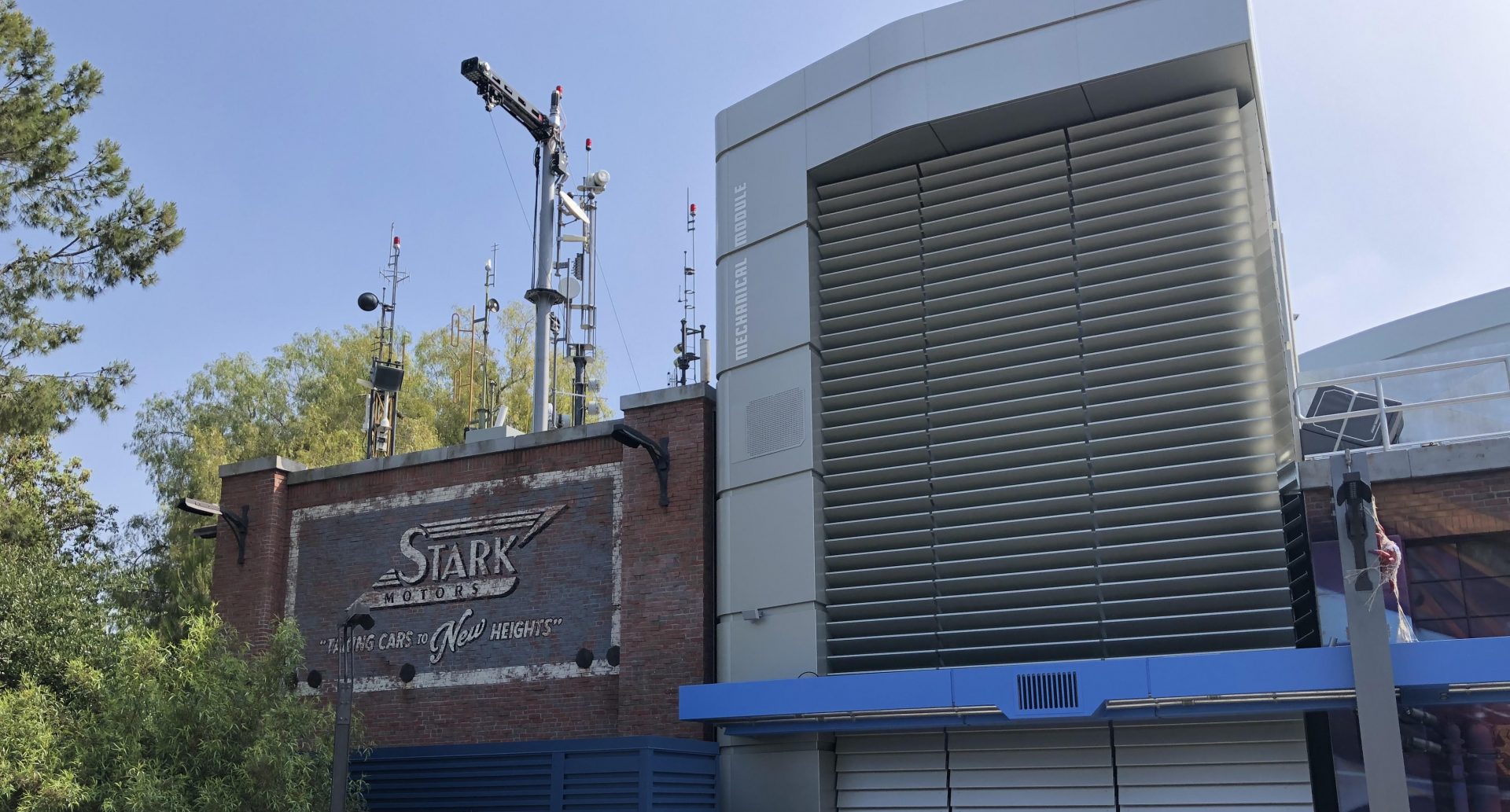 Unlike Midway Mania, you don’t need to press any buttons or shoot anything to get all the bots. All you need to do is throw out your arms and make hand gestures just like Spidey. The webs “come out of your arms” and meet their targets. And given that the entire mechanism is a motion sensor based on the rider’s arm movements, it’s wild how very accurate it is. And it is undeniably joyous to “ play Spidey,” no matter how old you are.

Of course, if you want the really cool version of this ride experience, you have to go to the adjacent WEB Suppliers store and put down some extra money for the fancier web-shooters. To be fair, the regular version of the attraction is super fun the way it is. But do you want to beat those Spider-Bots with I ron Man repulsor rays or something other than just webs? Then it’ll cost you money. And that is sure to really annoy some folks.

And right now, WEB SLINGERS is the only new attraction in the land. Guardians of the Galaxy- Mission: BREAKOUT! is still a prime attraction to be sure, but it’s been there for four years. So when it comes to new Marvel attractions, Spidey is all we’ve got right now. It might be years before we see something new, and that’s not great. 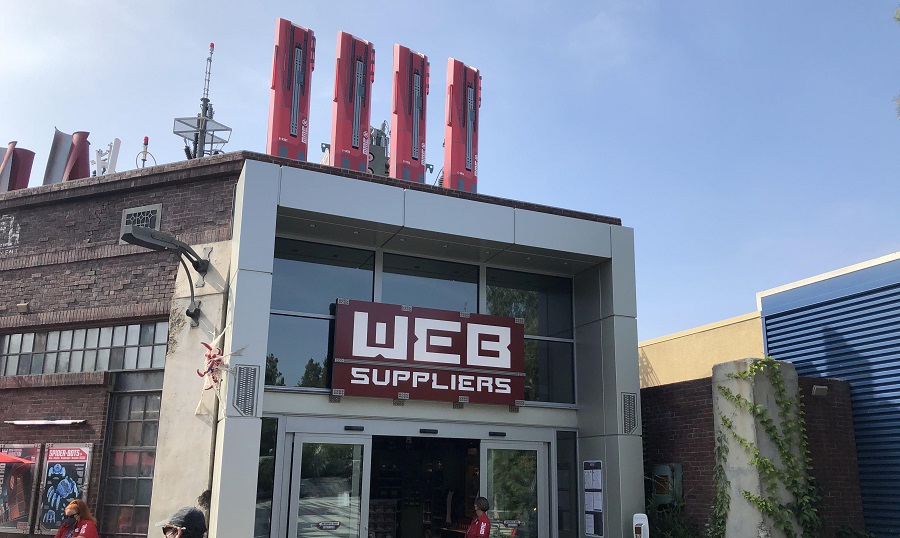 There is one thing that Avengers Campus currently has over Galaxy’s Edge, however. At least as we saw, there were far more appearances and interactions with the characters. You might see Chewie and Stormtroopers wandering around Batuu. But Avengers Campus features a full magic show from Doctor Strange in the ruins of his Ancient Sanctum. This magic and light show we saw in daylight was pretty fun, but we get the feeling it is far more impressive at night, when the light displays can be appreciated.

Nothing but respect for the Dora Milaje pic.twitter.com/jcrV4jrjZS

Black Panther’s elite Dora Milaje give a full military training demonstration to guests. It’s one in which guests can actually participate. In this sense, when it comes to characters, Avengers Campus rules. And although we didn’t see them, we know that the rest of the MCU’s greatest heroes are also a part of the land. Well, except for Hulk. But not sure how they’d pull him off. We issue you this challenge, Walt Disney Imagineering!

Here’s our preview of the newest section of Disney California Adventure before it opens June 4 💫 pic.twitter.com/ldsW40EgH3

In terms of characters wandering the land, the champ is none other than Spider-Man. Not only do we get the character doing full acrobatics atop the WEB building that houses his attraction, but it also allows for the use of the very advanced stunt animatronic developed by Walt Disney Imagineering. Although your eyes know that it’s not a real person, it absolutely looks and feels like a real live human swinging through the sky. Disney developed this new animatronic tech just for this, and it will make your inner child squee with delight upon seeing it in action. 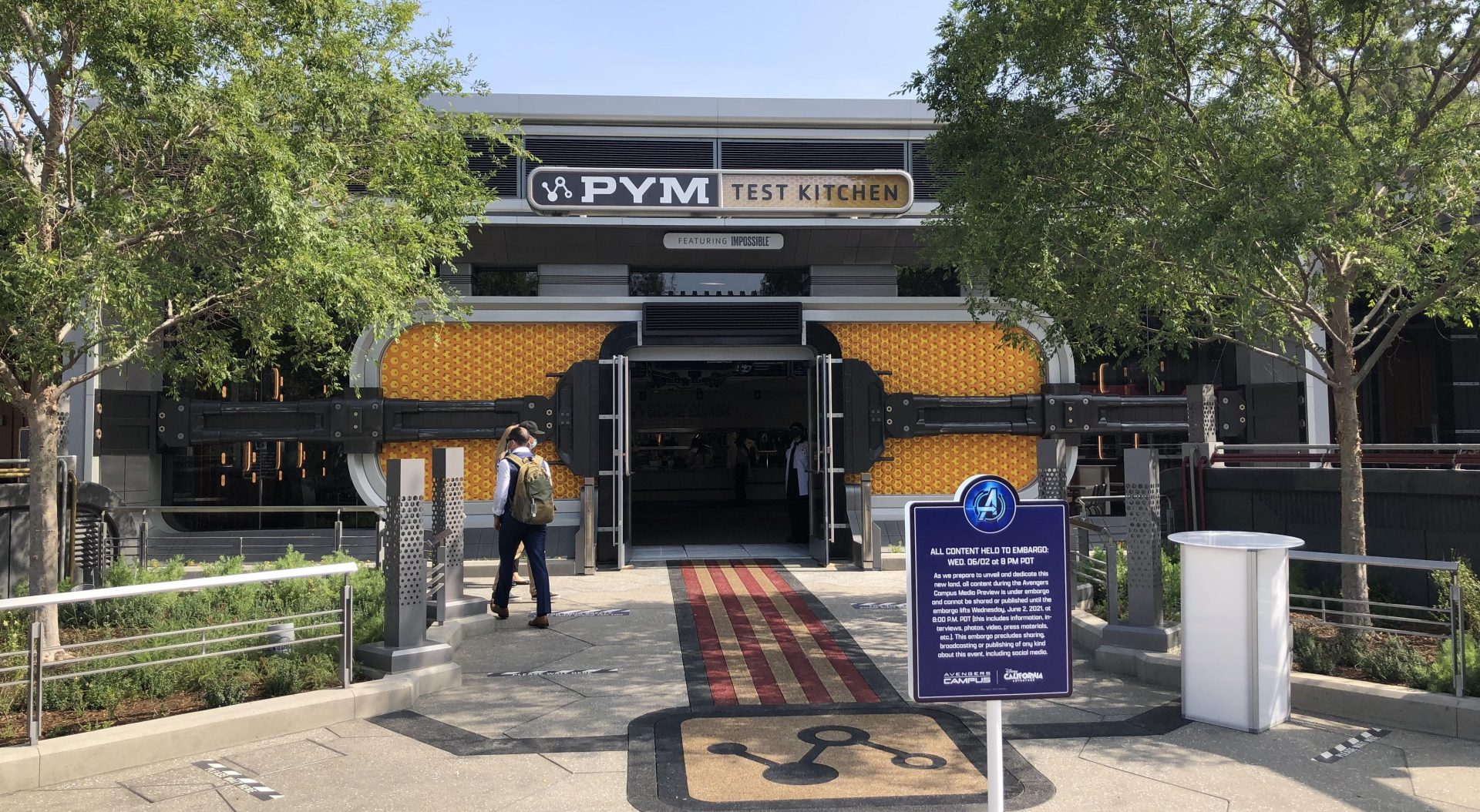 The rest of the offerings are basically food and shopping. The Pym Test Kitchen has food items both giant and tiny, Just like the tech we see in the Ant-Man films. We only got to taste their Atomic Pretzel, but it was indeed delicious. When you walk into the restaurant, it’s designed to feel like you’re going through the quantum tunnel of Hank Pym’s design. Which is a very nice touch. There’s also a Shawarma cart, a nod to the first Avengers’ famous end credits tag. 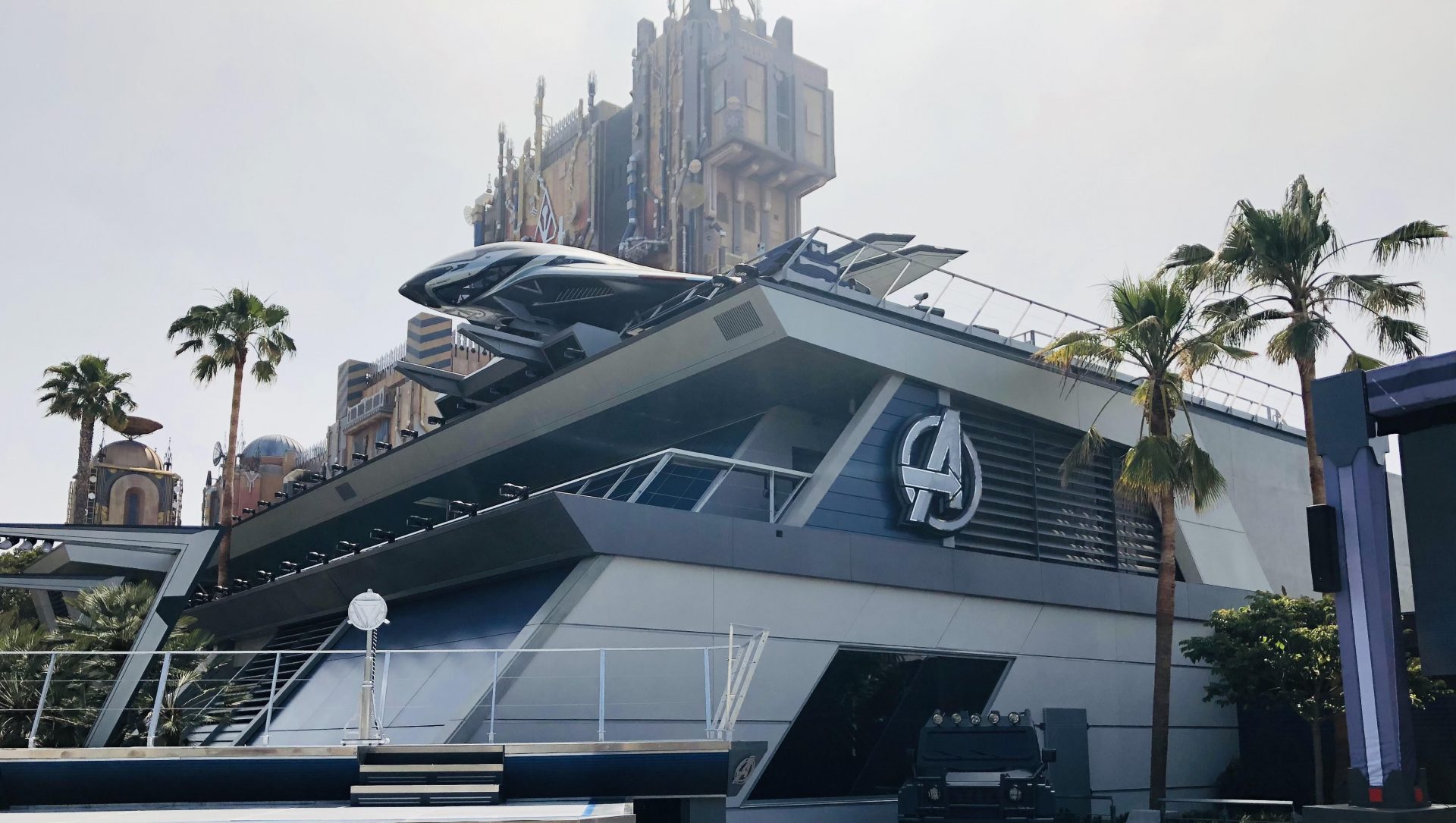 In terms of buildings, the “star” is Avengers Compound. It features a to-scale replica Quinjet perched atop the roof. This recreation of the famous MCU locale is indeed cool to stand and take selfies at. But right now it’s housing nothing. There will be stunt shows on its roof, but we didn’t see that in person. You also can’t go in. Rumor has it this will be an eventual line queue area for a future attraction, which brings us to our biggest gripe. There’s simply no new E-ticket attraction at Avengers Campus.

In Disney slang, an “E-ticket” refers to a premier-level attraction. Not a short dark ride like Snow White, or a 3D shooter like WEB SLINGERS. And Avengers Campus simply needs an A-list ride on that level. They are working on one. Last year, Imagineering previewed concept art and ideas for an immersive top-tier attraction for a proposed Phase Two of Avengers Campus. But they need it sooner rather than later. Because a place called Avengers Campus simply needs an Avengers attraction. One that is a show stopper, like Rise of the Resistance at Galaxy’s Edge.

As of right now, Avengers Campus is something no Marvel fan will want to miss. Especially if you’re a local. But say you’re planning an expensive cross-country trip for the whole family to join Earth’s Mightiest Heroes. Then it’s possible you might want to wait a couple of years until Phase Two. Just like the MCU movies, that’s when things really went from good to great. We have a feeling Avengers Campus will follow a similar trajectory.