Sometime this year, the Marvel Universe will arrive at the Disneyland Resort when Avengers Campus opens at California Adventure in Anaheim. We’ve seen in concept art already released that Spider-Man can be seen swinging around the campus, just as he does in the movies. But that was all just pie-in-the-sky concept art, right? Nope. It looks like Spidey will indeed be swinging through the skies of Avengers Campus in view of all the park guests, in the form of a state-of-the-art life size animatronic.

The Disney Parks Blog, (via Slashfilm) has just released a video of the new swingin’ Spidey, which you can see down below, and which shows off the animatronic in all its glory.

Many fans have suspected that this high flying Spidey was going to become a reality. The reason being that as far back as a year and a half ago, Walt Disney Imagineering was developing “Stuntronics” creations. These animatronic stunt people would be able to do things that would be too dangerous for an ordinary stunt person to do, or at least do on a regular basis. At the time, it wasn’t known if this was for a Star Wars or a Marvel character or even Peter Pan. But this new video confirms it is indeed for Spidey. So when Avengers Campus opens this summer, the wall crawler will be flying high above the land. 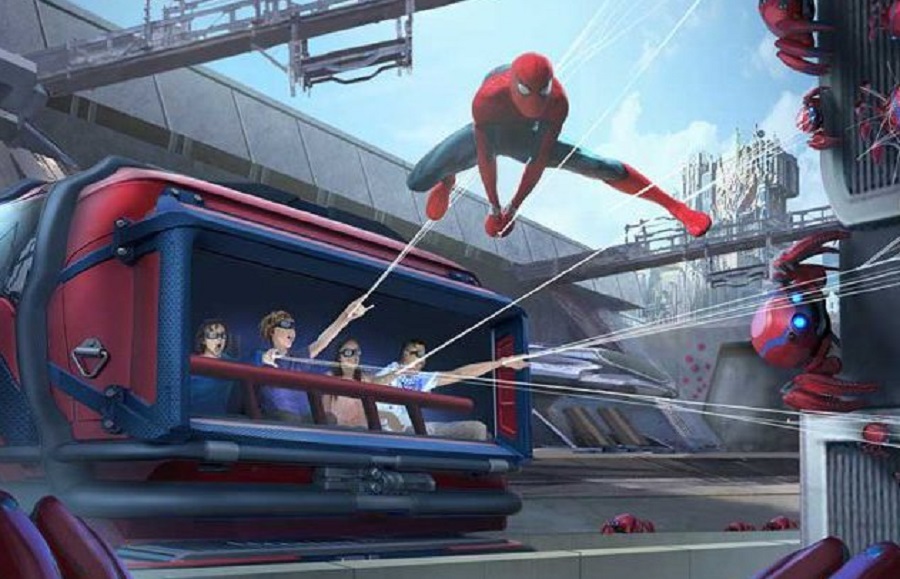 Of course, once this new stuntronic creation is up and running, there is no stopping Walt Disney Imagineering from applying the technology to other parts of the park. Certainly Galaxy’s Edge would benefit from having the Mandalorian flying high above the land, Baby Yoda in tow. And it would add a nice sense of kinetic energy to the land, which currently is like an giant (although awesome) standing movie set. And maybe they could use it for the eventual and much needed Tomorrowland revamp.

When Avengers Campus opens in summer of 2020, the only new attraction on opening day will actually be this new Spider-Man ride, where the new animatronic will be used. The ride will be housed in a building labeled “The Worldwide Engineering Brigade,” or WEB for short. (Stan Lee would be proud). The rest of the land will feature things like a Doctor Strange live show, an Ant-Man and the Wasp micro brewery, and several meet and greets with characters from the MCU. Of course, Guardians of the Galaxy: Mission Breakout! will be grandfathered into Avengers Campus, so technically there will be two attractions.

But a couple of years from now, the big “E-ticket” attraction coming to Avengers Campus will arrive. This was announced at D23 Expo last year. It will be an Avengers simulator that will take guests into the middle of the Avengers biggest battle ever in Black Panther’s home of Wakanda. Only concept art for that one has been released, but that ride looks to be the crown jewel of the land, much as Rise of the Resistance is the star attraction over at Star Wars: Galaxy’s Edge. Once completed, and combined with the Spider-Man attraction, Avengers Campus will be a dream destination for every Marvel fan on the planet.