LEGO has announced five new Endgame sets that promise the Avengers aren’t done fighting Thanos, whether it’s on the road, in the air, at their compound, or in the Quantum Realm. 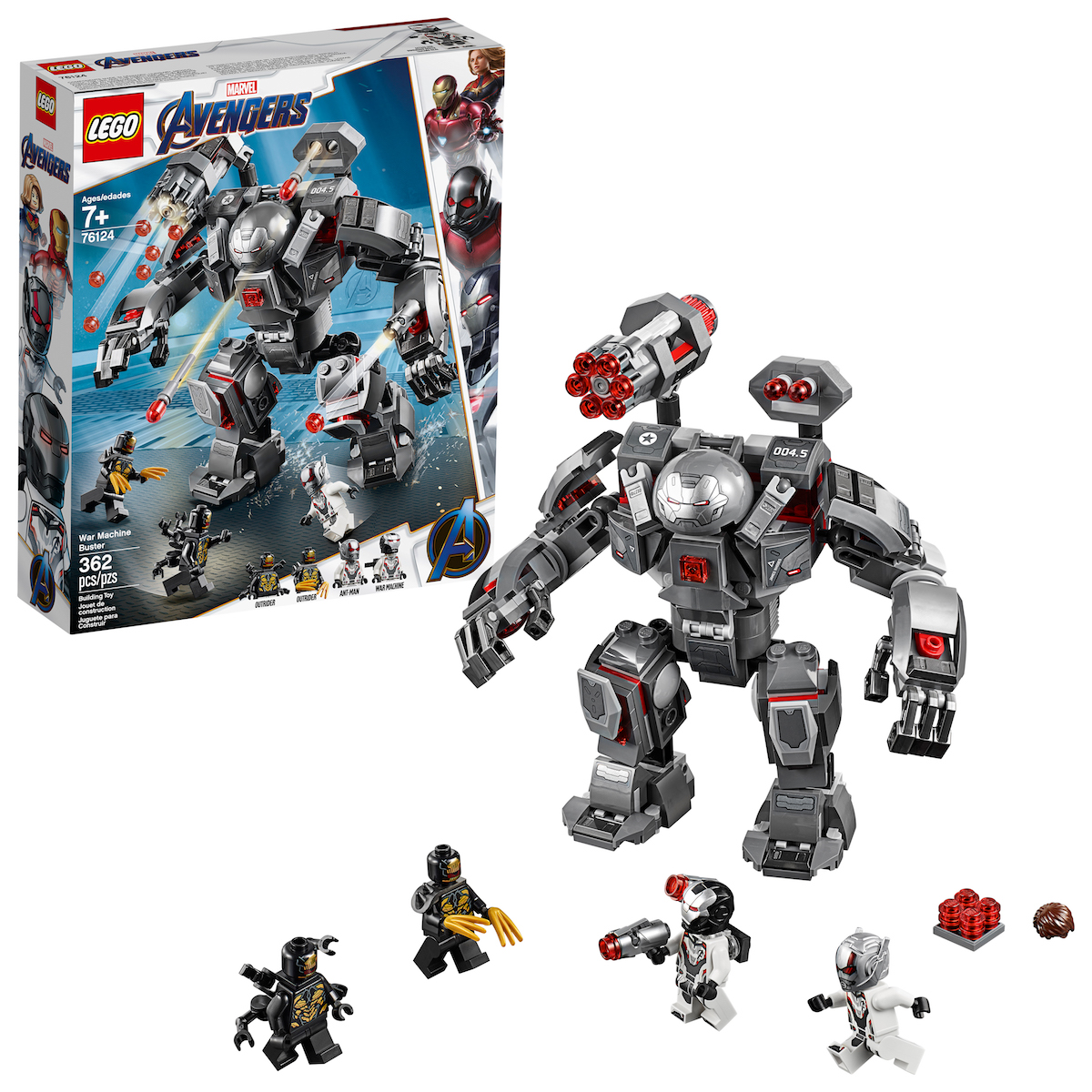 We’re less than a month away from the release of Avengers: Endgame and there’s still so much we don’t know about the movie, but we’re starting to learn more about the film’s toys. After Hasbro announced tons of new figures and collectibles, LEGO has shared five new sets for the movie that are all available now. We still have to wait to find out whether these contain actual spoilers or are just fun playsets, but either they look like a lot of fun. 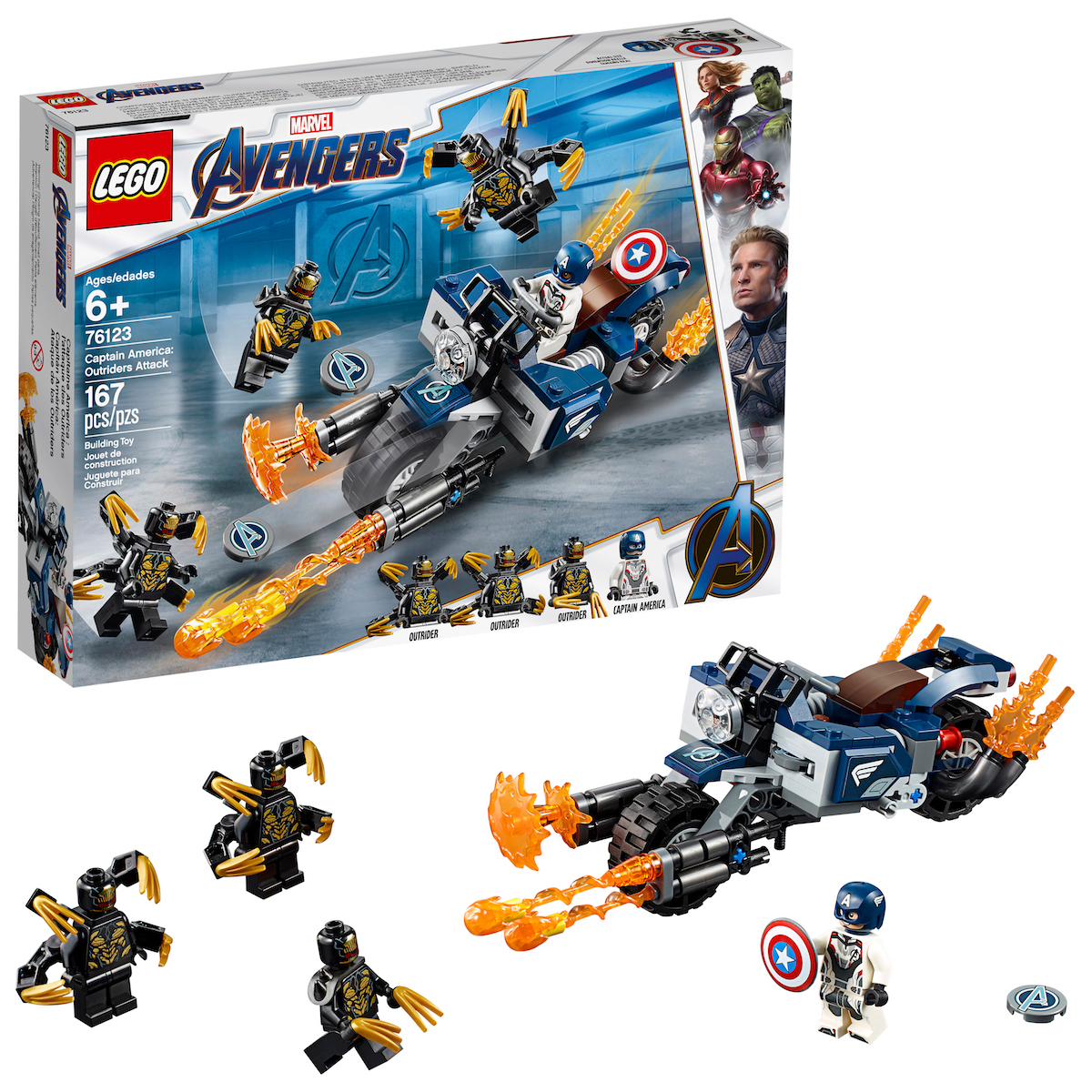 This 167-piece Captain America set ($19.99) has Steve Rogers in his new helmet and Endgame suit, riding a motorcycle and fighting three Outriders (those gnarly creatures who attacked Wakanda in Infinity War). Cap’s bike (2” high, 8” long, 2” wide) comes with a minifigure cockpit, two Captain America shield shooters, a front wheel with a detachable non-shooting blasters, attachment points for minifigures, a fold-down bike stand, headlights, and an exhaust flame. The blasters also fit into Captain America’s hands, as does his shield. 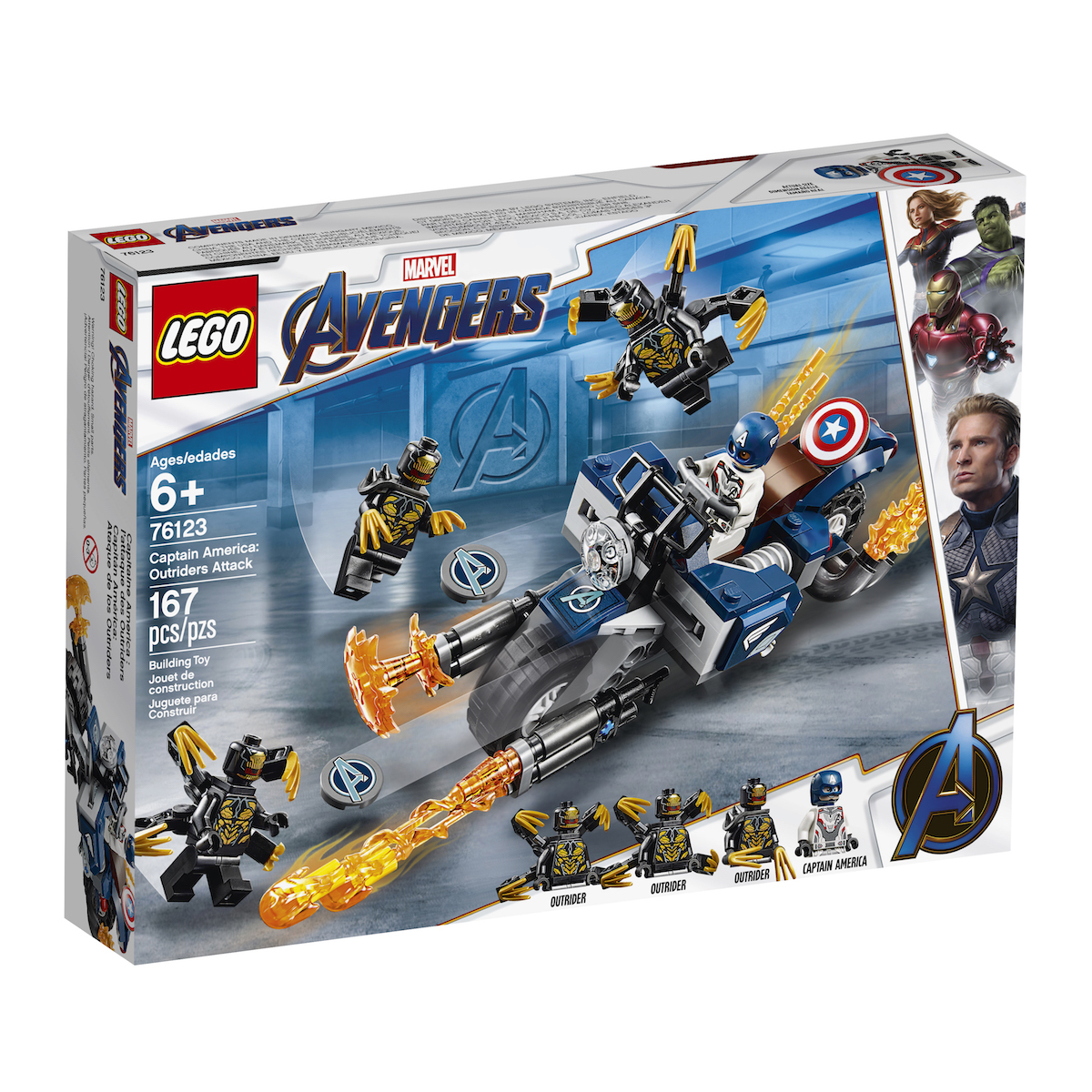 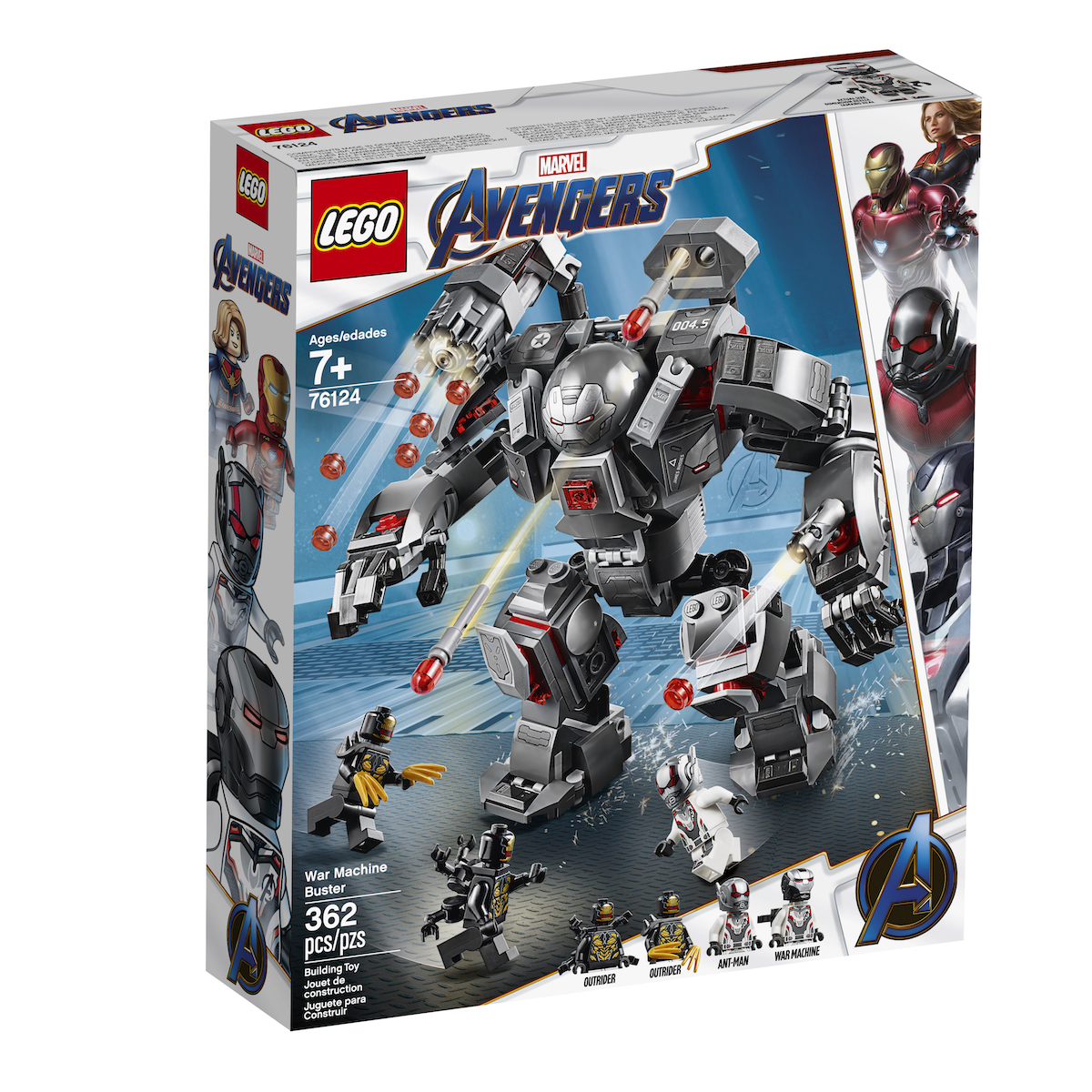 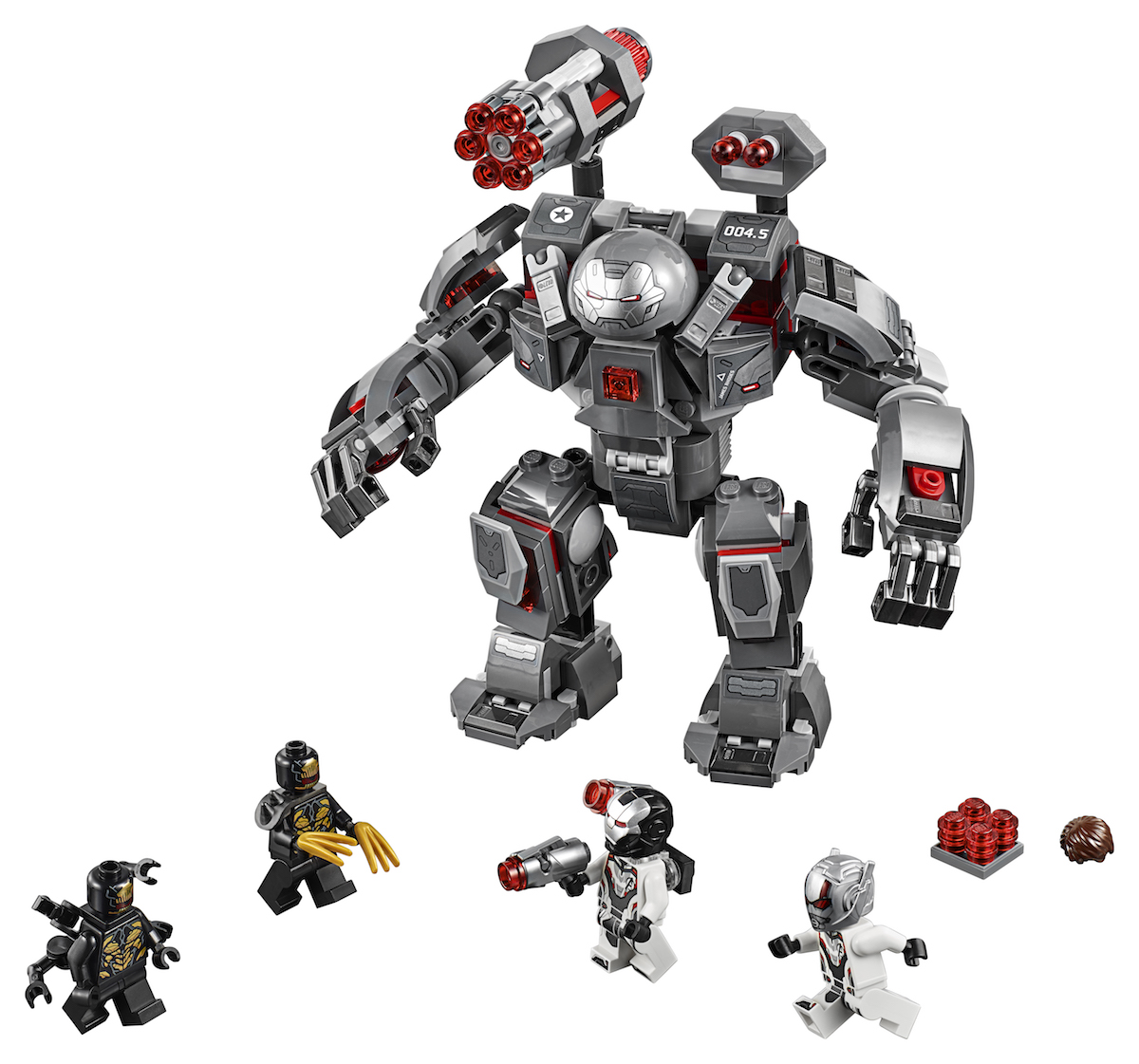 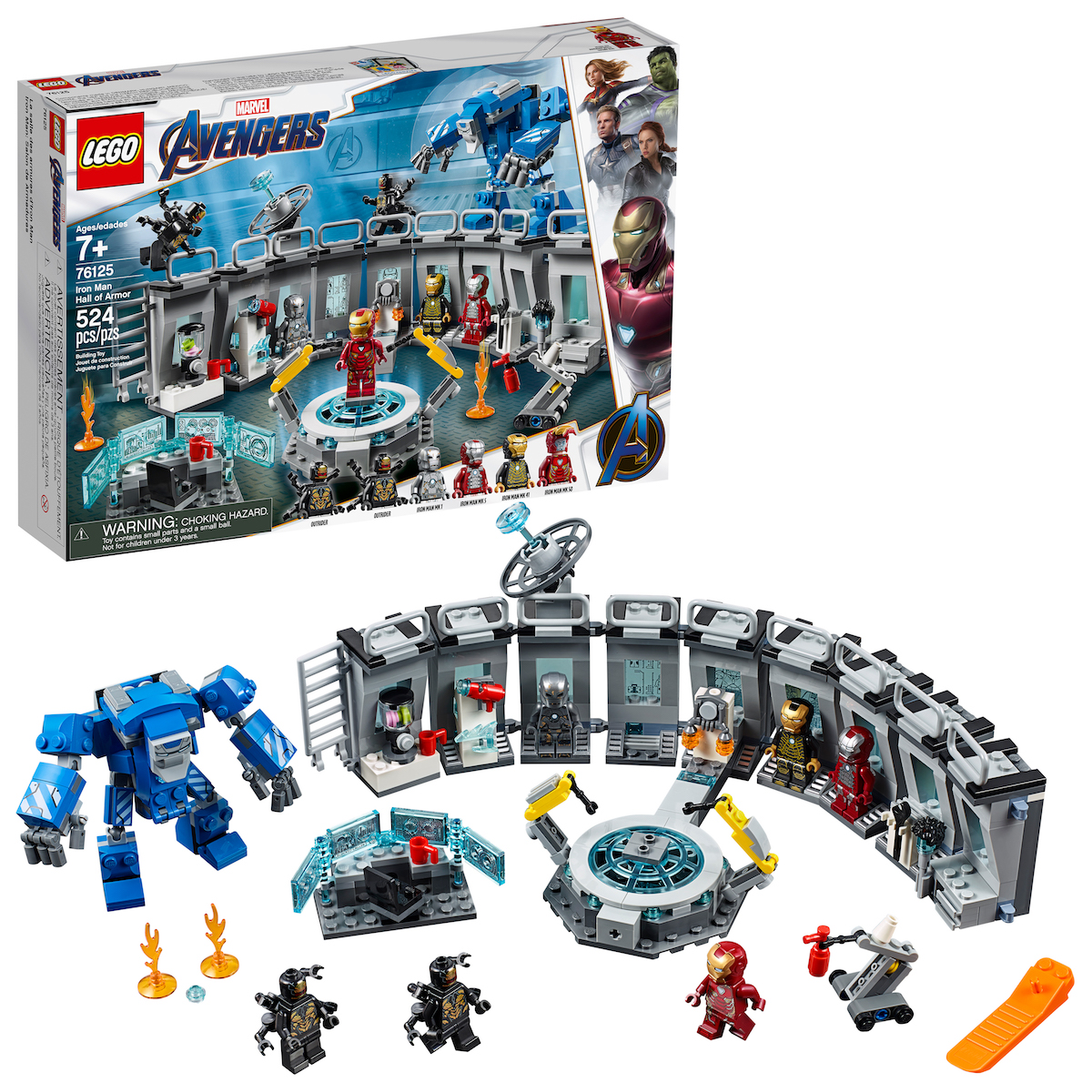 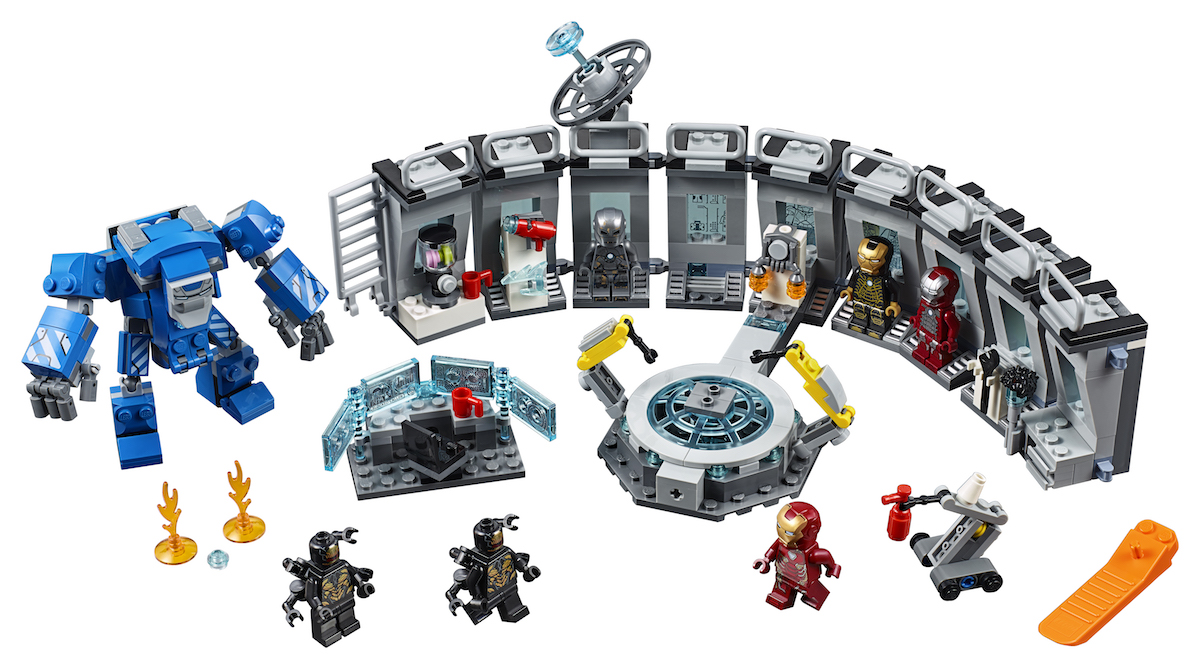 Those modules are detachable so you can combine and stack them however you like, and the Igor suit (over 3” high, 1” long, 3” wide) also has a spot for another minifig to fit in. 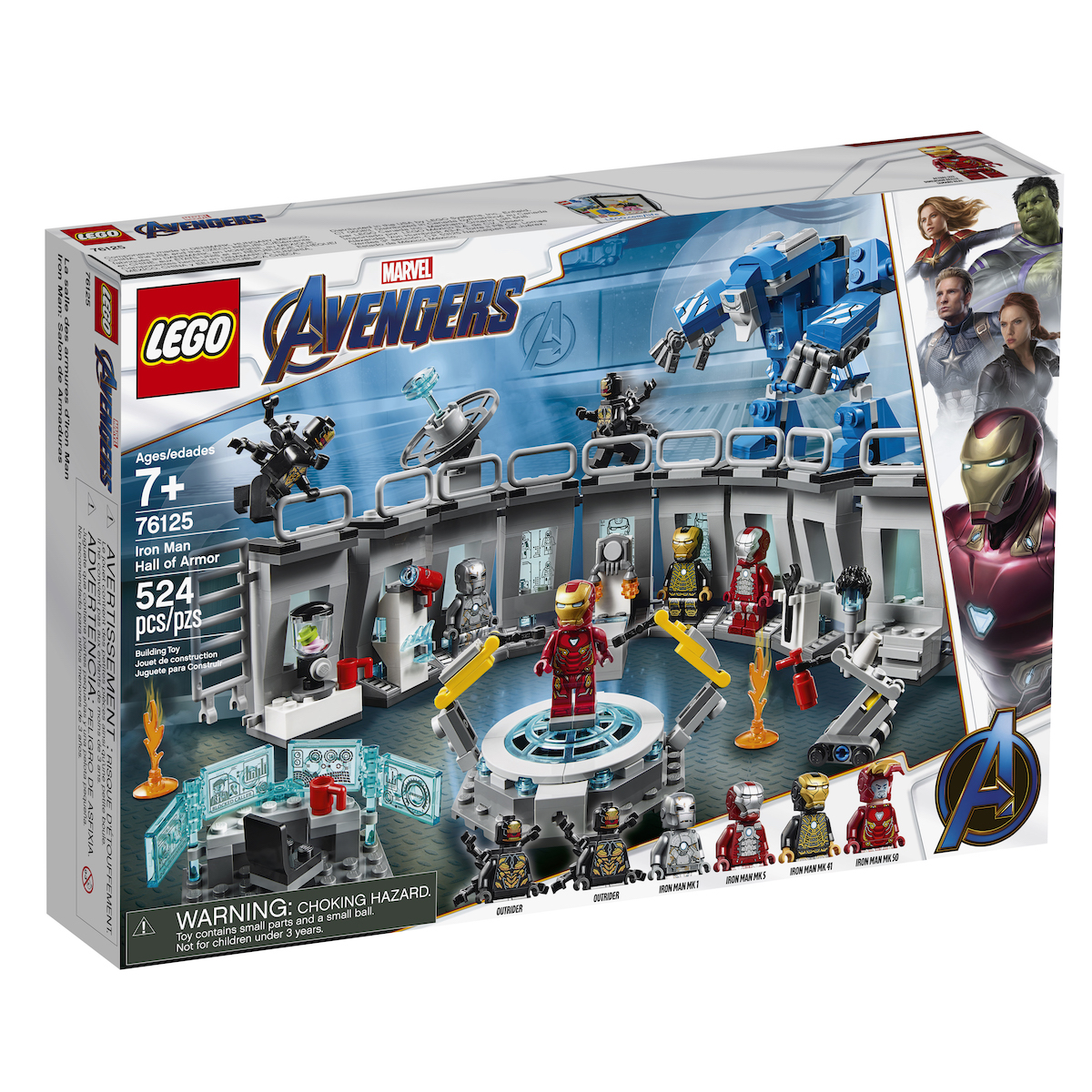 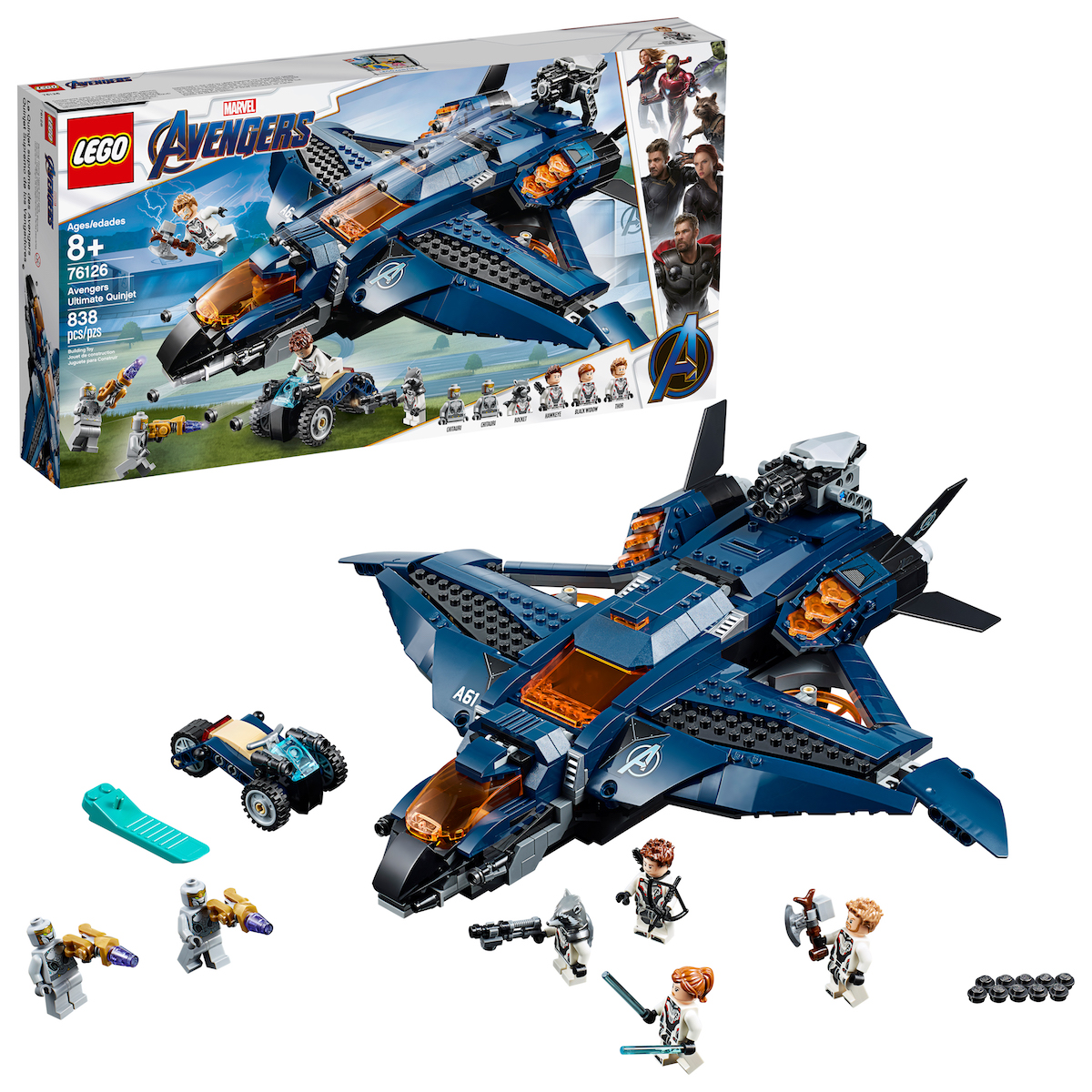 The Avengers’ favorite ride, the Quinjet, is getting a new, Ultimate 838-piece set ($79.99). In addition to six minifigs—two Chitauri, along with Black Widow, Hawkeye, Rocket, and Thor in their new suits—the buildable Quinjet (over 4” high, 15” long, 11” wide) comes with a minifigure cockpit, two stud shooters, an opening passenger compartment with seats and weapon racks, an opening rear compartment with fold-out six-stud rapid shooter and trike, and adjustable wings and spinning rotors. 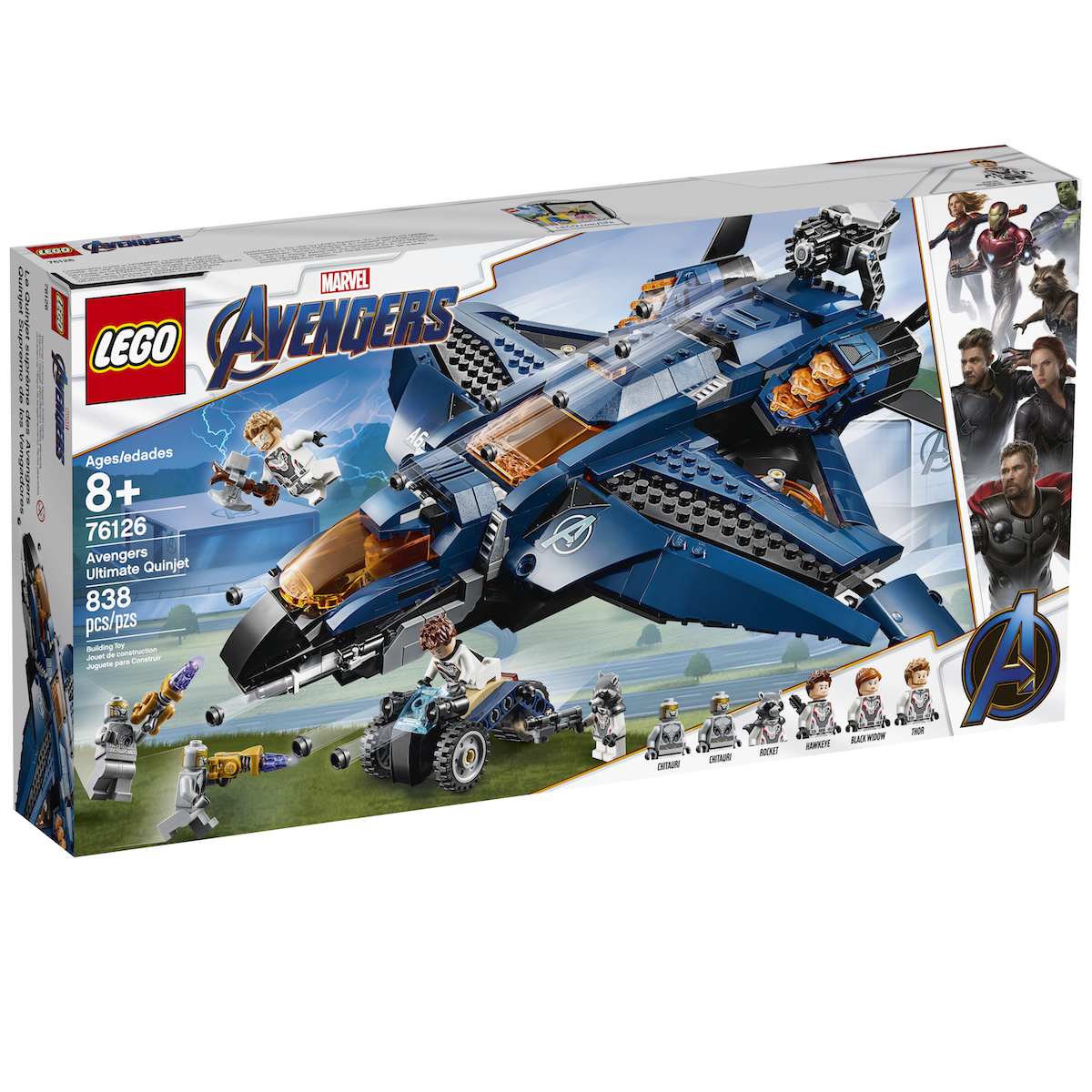 The figures are also ready for battle. Black Widow has two energy sticks, Hawkeye has his bow and arrow, Rocket is equipped with a gun, Thor has Stormbreaker, and the Chitauri have their own blasters (and no chance). 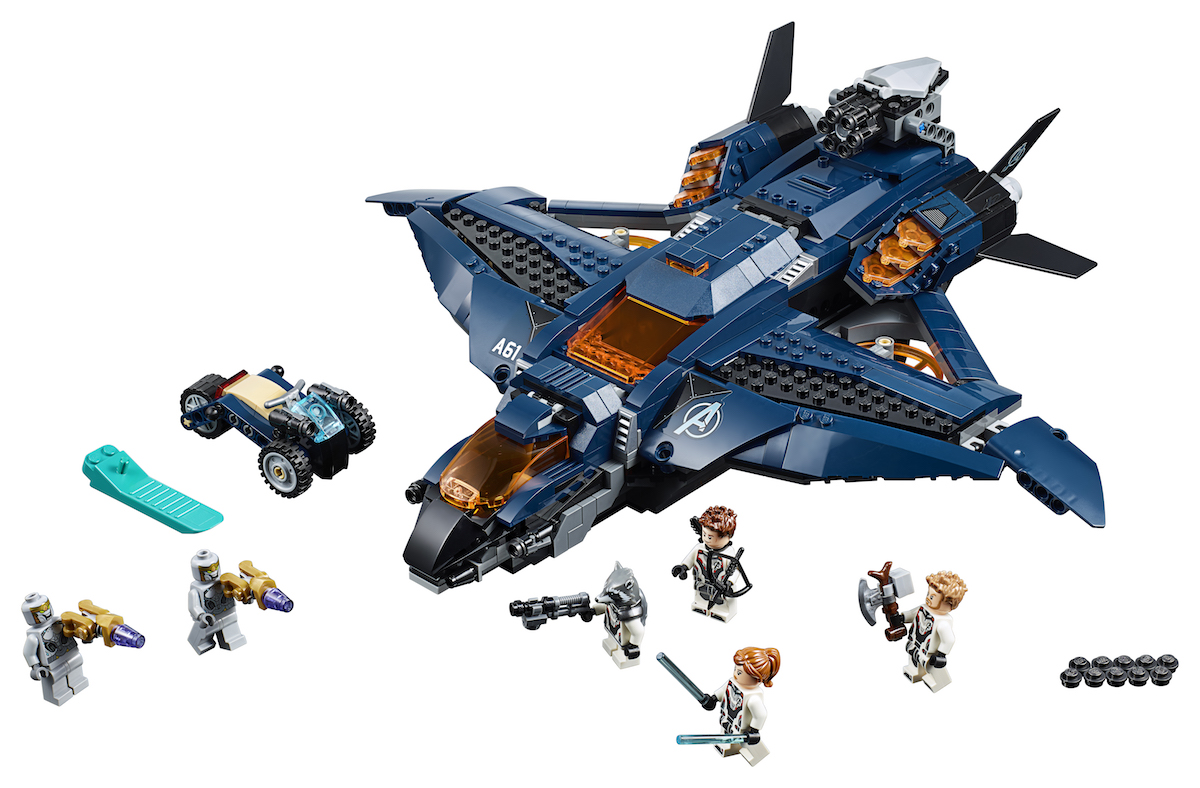 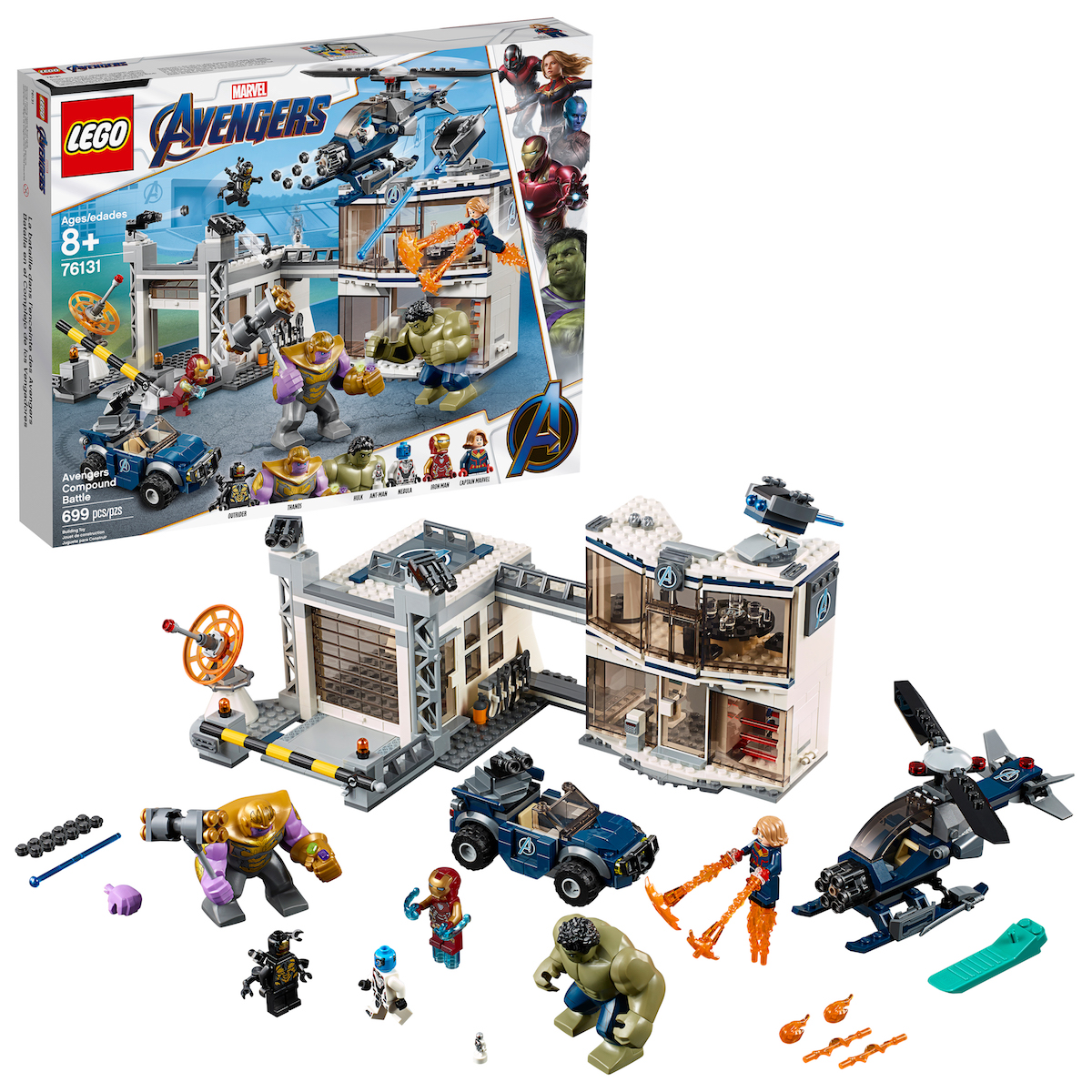 While not the biggest of the new sets at 699 pieces, the Avengers Compound Battle does come with the biggest price tag ($99.99) and a Mad Titan. It includes regular figures of Iron Man, Captain Marvel, Nebula (in new suit), and an Outrider, along with over-sized, posable Hulk and Thanos figures (with only two Infinity Stones, hmm), and a micro Ant-Man figure (also in new suit).

The compound features two levels. The office building includes two Avengers logos, a rotating, tilting spring-loaded shooter on the rooftop, a lower level with an entrance, a rotating computer, a “laser-beam” safe. The upper level has a meeting room, table with secret compartment, a rotating door leading to the helipad and accessories (three chairs, two guns, three cups, and a jug). 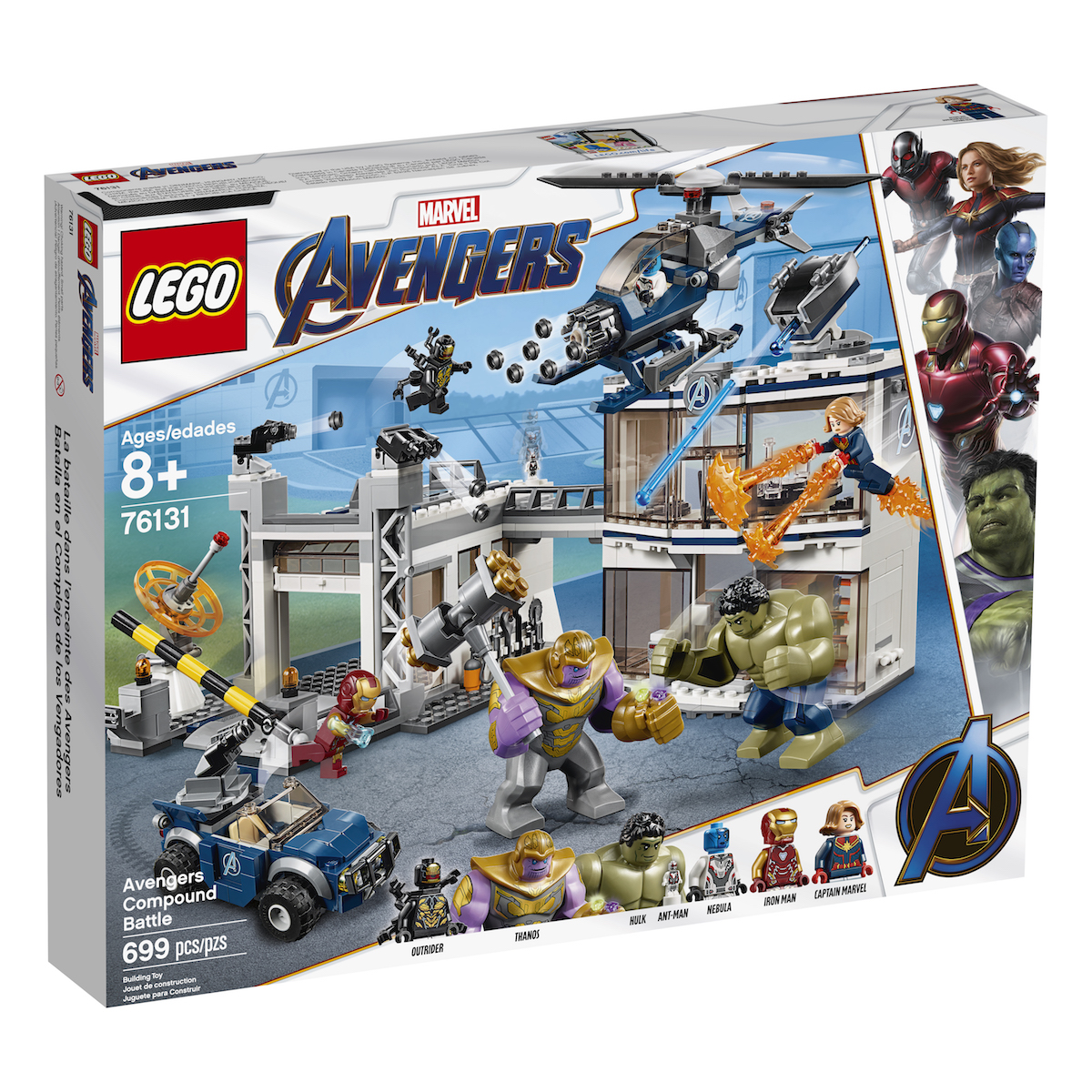 There’s also a a helipad with two dual stud shooters and a bridge to the office building, a garage for the buildable off-roader with a ramp, an opening barrier, a rotating, tilting radar dish, along with tool racks that come with a crowbar, wrench, welder, and circular saw. The set’s helicopter has a cockpit for two minifigures, two spinning, tilting rotors, and a six-stud rapid shooter. Weapons and accessories include Nebula’s sword, Thanos’ double-sided battle axe, and 10 power bursts for Captain Marvel. 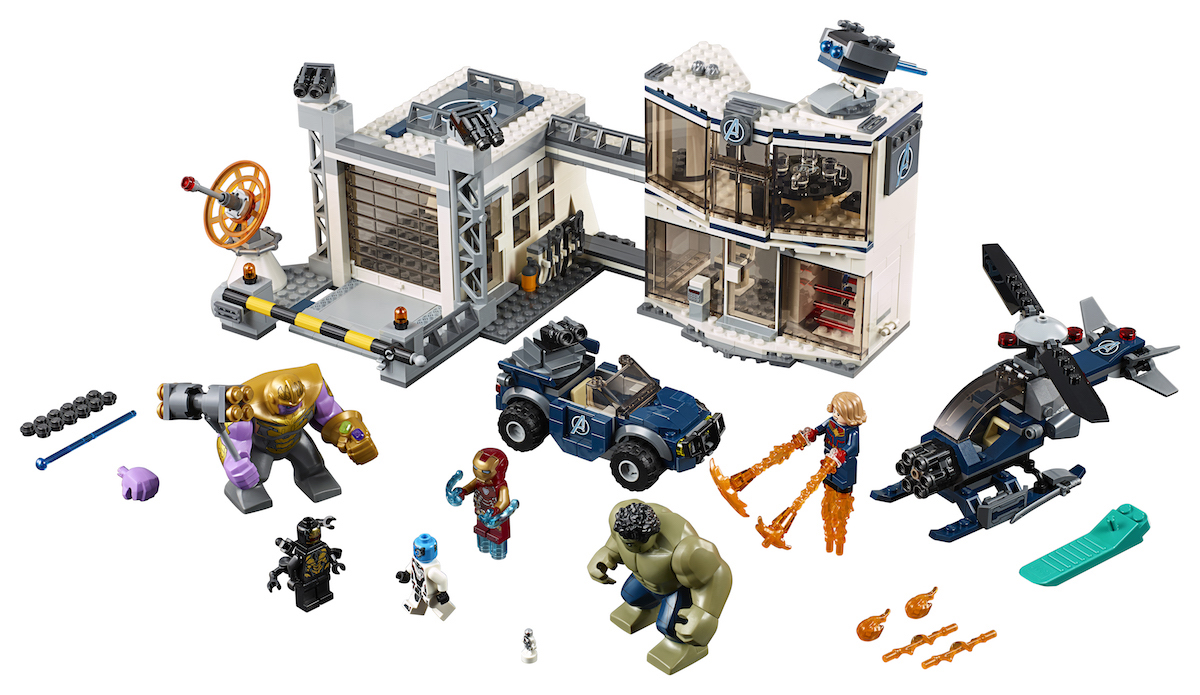 Even if these are spoilers, we still don’t know a lot about the movie! But we’re more excited than ever to see it.