Which YOUNG AVENGERS Comics Could Inspire Their MCU Debut? - Nerdist

Which YOUNG AVENGERS Comics Could Inspire Their MCU Debut?

You don’t need to have the mental powers of Professor X to see the future the MCU is headed in: Marvel Comics’ Young Avengers are on the way to live-action sooner rather than later. The clues are all there already. The most prominent members of the original roster—Wiccan, Hulkling, Patriot, Iron Lad, Hawkeye, Speed, and Stature—have already been introduced, announced, or broadly indicated.

Cassie Lang, a.k.a. Stature, has already been introduced in the Ant-Man films. And post Endgame, she is also now conveniently a teenager. WandaVision teasers have already hinted at the Scarlet Witch and Vision’s twins, Wiccan and Speed. And the Kate Bishop character has already been announced as being the co-lead of the Disney+ series Hawkeye. That’s four down.

As for the rest of the original members of the team, we only have conjecture to work with. But the possibilities are looking good. Hulkling is the half Kree/half Skrull child of Mar-Vell and a Skrull Princess. Mar-Vell made a splash in Captain America, played by Anette Bening, meaning we’ve already met one of Hulkling’s parents. While the film made no reference to her having offspring, who’s to say she didn’t have a secret child? 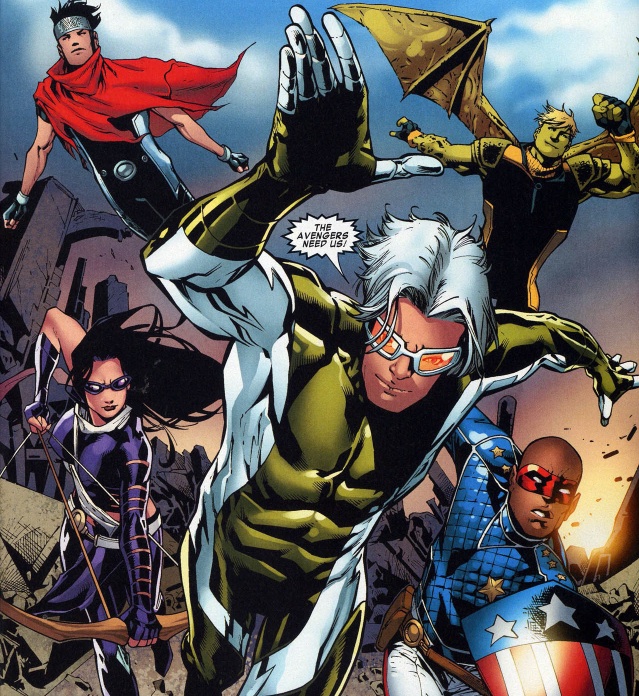 It’s also been rumored that the African-American Captain America from the ‘40s, Isaiah Bradley, will appear in Falcon and the Winter Soldier. His grandson in the comics is founding Young Avenger named Patriot, who was almost in Black Panther. And finally, current rumors suggest that the “big bad” in Loki is none other than Kang the Conqueror. If that’s the case, we’re likely also being primed to meet his younger self, Iron Lad.

So given all that, it’s safe to say that we are likely going to see the team take shape in some form soon. What stories might we see them adapt? Although the team has only been around in comics for about fifteen years and a couple of series—a drop in the bucket when it comes to comic book legacy—there is still plenty to draw inspiration from. Here are some Young Avengers stories that we’d love to see adapted, either on the big screen or as a Disney+ series. 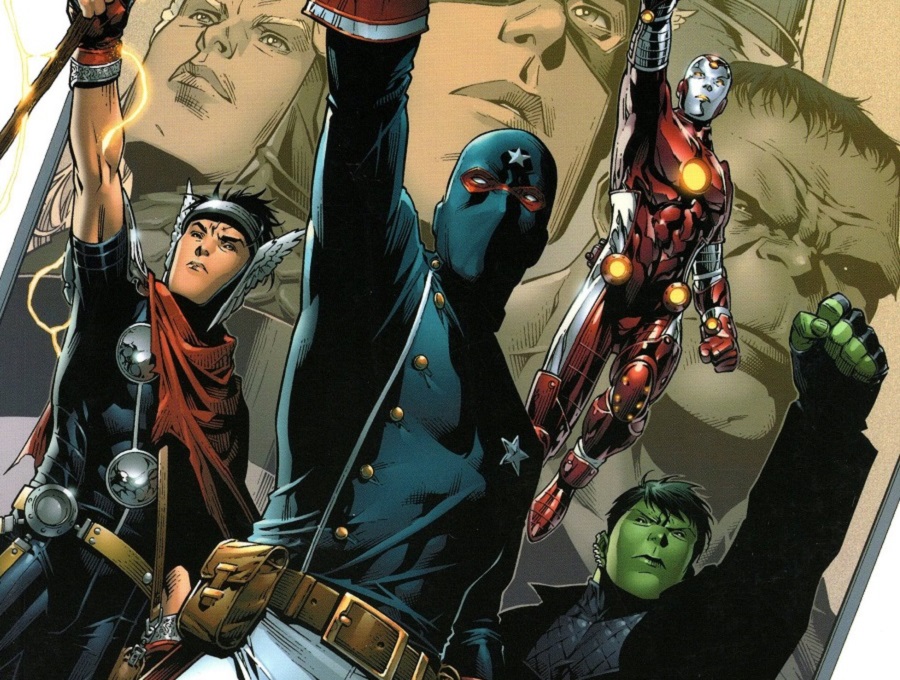 The first volume of Allan Heinberg’s series introduced a team of heroes who looked like teen versions of the original Avengers. And they arrived just in the nick of time, as the original Avengers had disbanded after the events of Avengers: Disassembled. But as far the world knew, Captain America, Thor, Iron Man, and the Hulk never had teenage sidekicks. So who the heck were these kids? Their first adventure revealed who these new teen heroes were, and it turns out they weren’t exactly related to the Avengers we thought they were.

As it turns out, Patriot was the grandson of the first African-American Captain America, and not related to Steve Rogers. Asgardian wasn’t from Asgard or related to Thor at all. But rather the long lost son of the Scarlet Witch (he’d later change his name to Wiccan). Hulking wasn’t related to the gamma-irradiated Bruce Banner, but was the half-Skrull son of the original Captain Marvel. And Iron Lad wasn’t the secret protégé of Tony Stark, but was the heroic younger self of one of the Avenger’s greatest foes, Kang the Conqueror. And speaking of Kang, the team’s first big obstacle was defeating the lord of time himself. This original run of the comic would be the perfect template for any future film or first season of a series. 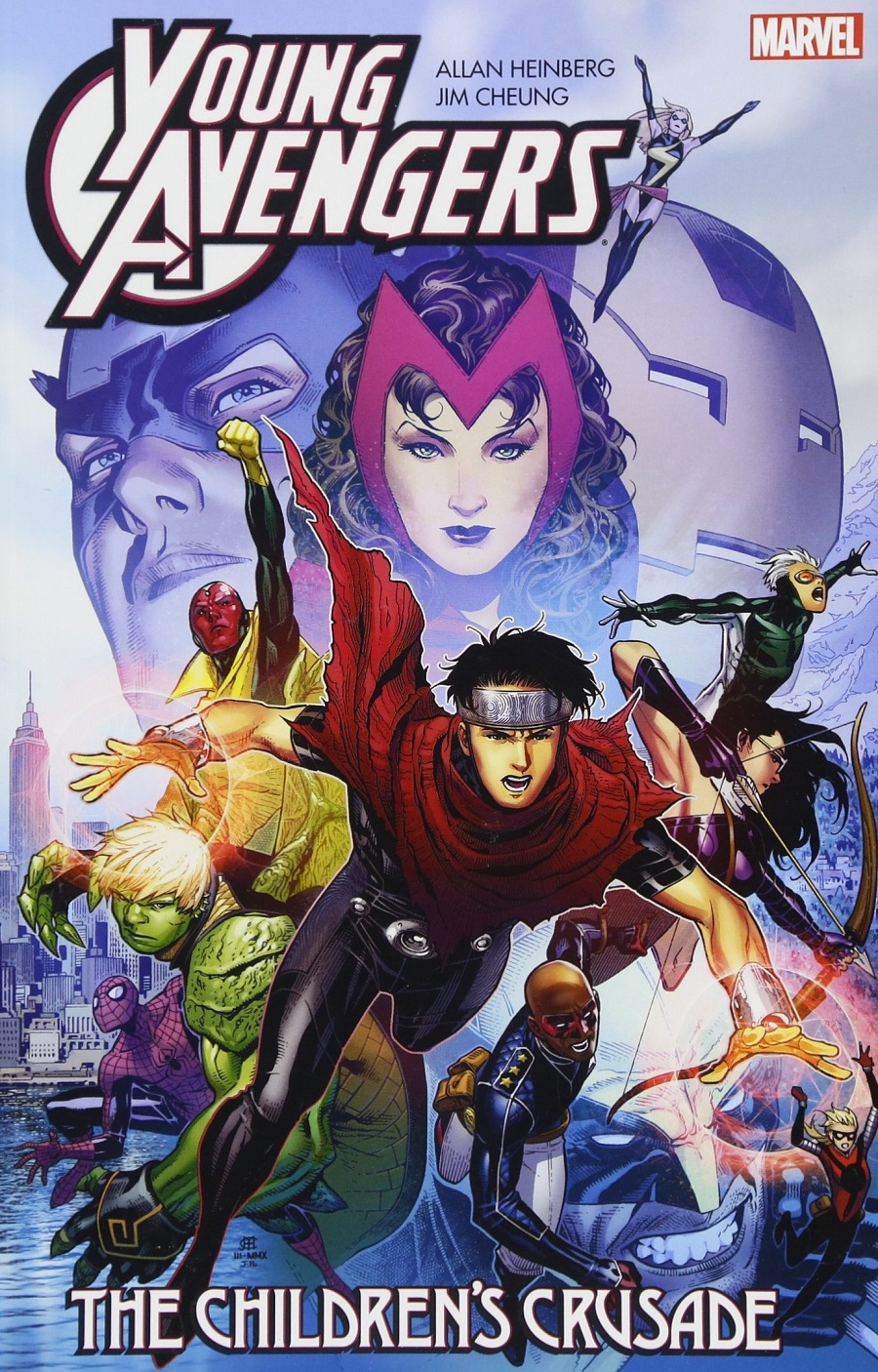 After a long hiatus, the Young Avengers returned to comics with this mini-series, which chronicled  Wiccan and Speed’s quest to find their long lost mother, the Scarlet Witch. At this point in the Marvel Universe timeline, the Scarlet Witch was hated by just about everyone. She had used her powers to decimate the original Avengers team, causing them to disband. And in the series House of M, she had used her incredible reality altering abilities to take away the powers of 99% of the world’s mutant population as well. But Wiccan believed his mother was still a hero, and along with his teammates, discovers the truth about Wanda Maximoff’s supposed turn to the dark side. This series heavily involves mutants, so Marvel Studios couldn’t have adapted it properly before. But now? All bets are off. 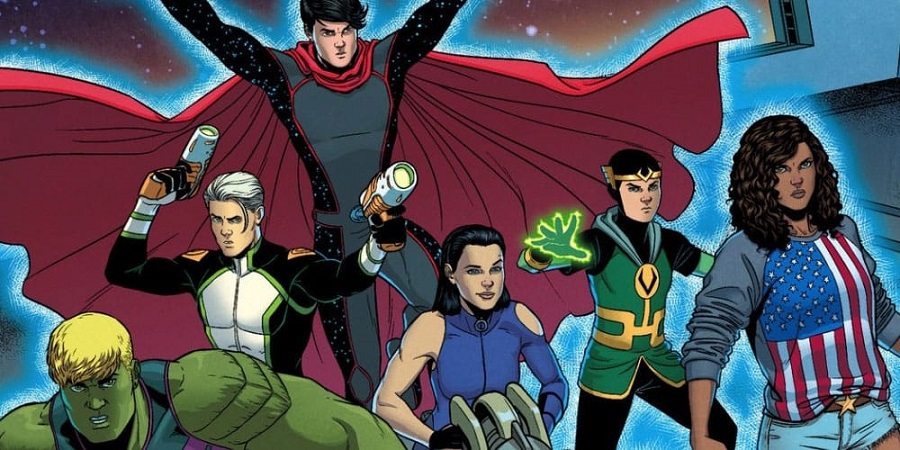 After some time without their own series, Marvel Comics brought back the ongoing Young Avengers comic book, for the first time without their creators Allan Heinberg and Jim Cheung. This new series from writer Kieron Gillen and artist Jamie McKelvie saw the teenage heroes reform under the guidance of Wiccan, his boyfriend Hulkling, and the Kate Bishop Hawkeye. They added new recruits like Miss America Chavez, Prodigy,  Marvel Boy, and the so-called “Kid Loki.”

This series focuses heavily on Wiccan discovering he potentially has a dark future ahead of him as the Demiurge, a threat as powerful as his mother once was. Wiccan’s power upgrade and possible slide to the dark side could be the perfect story fuel for a season of television. And adding diverse characters like Miss America would also only benefit the MCU.

Whatever ends up happening, Marvel’s new generation of heroes are clearly on their way. Here’s hoping the brain trust at Marvel Studios uses these great comics as proper inspiration when the time comes.