How SCARLET WITCH Went from Mutant to Magic in the Comics

Wanda Maximoff, as played by Elizabeth Olsen, is going to have a big presence in the MCU’s Phase 4. Not only is she headlining WandaVision on the Disney+ service, but she will costar in Doctor Strange in the Multiverse of Madness. All of this implies we are going to see Wanda finally become the true Scarlet Witch of the comics, and dive deep into her vast power set—that which only seems to be increasing with each film. After all, she was one of the few heroes in Avengers: Endgame to truly put a dent in Thanos on their lonesome.

Her powers in the MCU are pretty different from what we see in the comics. In the films, she can create illusions in people’s minds (as seen in Age of Ultron), and is obviously a powerful telekinetic. Because she’s likely going to get an upgrade to true sorceress status in the movies soon, an exploration of her evolution from mutant hero to one of Earth’s most powerful magic users in the comics is in order.

Despite being called “the Scarlet Witch” from her very first appearance in X-Men #4 in 1964, Wanda Maximoff was described as a mutant and not a true witch of the supernatural variety. Even then, her superpowers were somewhat ill-defined. She had a “hex” ability that allowed events to go her way despite all probability. For example, if someone shot at her, her “hexes” could make the bullets suddenly change trajectory, and so forth. She was basically altering the laws of physics, but it wasn’t considered to be “magic” in the strictest sense. Like all mutants, her powers were part of a natural born genetic condition.

But of course, in the Marvel Comics universe, science and magic coexist. During the ’70s run on Avengers, writer Steve Englehart decided to make Wanda live up to her name and become a true witch. He had her study actual sorcery under the tutelage of Agatha Harkness, an old and powerful mage who had appeared in the pages of Fantastic Four. She learned that while her hexes might be genetic in nature, they allowed her to tap into and manipulate actual magical forces. She wasn’t just a “witch” in name only anymore. Plus, she became that much more powerful. 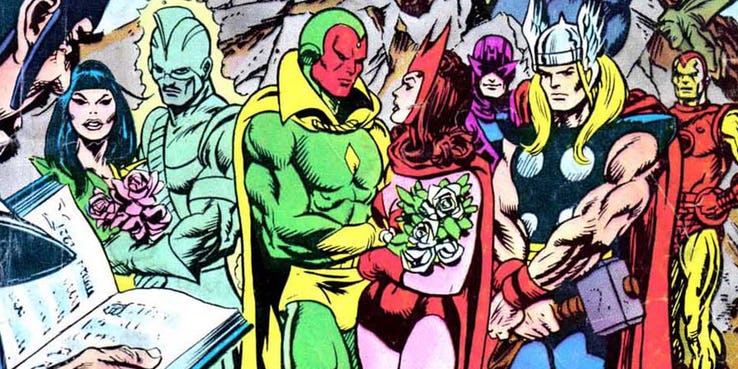 Wanda famously fell in love with and married the android Avenger the Vision (a relationship that has made its way into the MCU as well). She even managed to have children with Vision despite his being an artificial life form. She used her hex power to alter probability so she would become pregnant. She gave birth to twins, Thomas and William, delivered by none other than Doctor Strange. This one act alone showed how powerful she had really become, as she could seemingly now create life. She retired from Avengering for a time, and lived a suburban life as a wife and mom, despite now arguably being the most powerful Avenger. 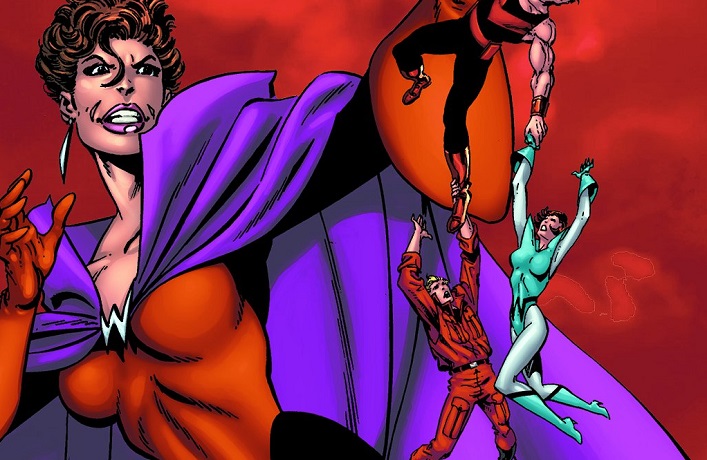 But domestic bliss was not to last. Wanda’s world would soon shatter, and her powers would be used against her teammates for the first time. It all started when the Vision was kidnapped and dismantled, and his personality erased. His not having an emotional connection to Wanda anymore effectively ended their marriage. After this, Wanda discovered her twins were created by tapping into a shard of the demon Mephisto’s soul. Learning her children were not real, along with losing Vision, caused Wanda’s first mental breakdown. She joined her father Magneto and became a villain for a brief time, but was ultimately turned back to the side of the angels. Her memory of having had children was wiped clean by Harkness, a decision that would haunt everyone years later. 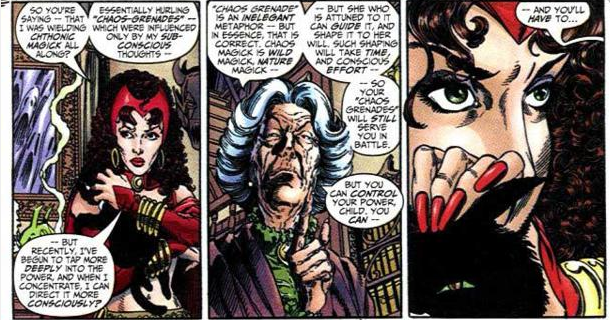 In the ’90s, Wanda realized that her powers allowed her to control something called Chaos Magic. During the Kurt Busiek/George Perez run on Avengers, she managed to bring dead hero Wonder Man back to life thanks to her ties to Chaos Magic. Now able to bring back the dead, Wanda was seemingly more powerful than ever. For the next several years she’s portrayed as one of the most powerful Avengers, and one of the team’s “big guns.” 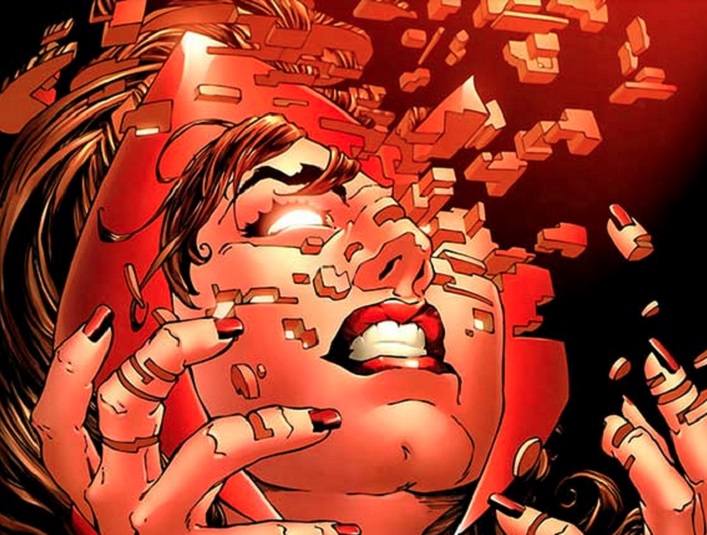 It was in the 2000s (specifically in Avengers: Disassembled) that Wanda went complete “Dark Scarlet Witch” on us. Realizing that her Avengers teammates were complicit in making her forget her own children, she subconsciously altered reality, resulting in a series of horrible events happen to her longtime friends (including seemingly killing Hawkeye and Ant-Man). She was finally defeated only due to the intervention of Doctor Strange.

At this point, Wanda was so powerful that she could warp reality with a thought. This went far beyond hexes or chaos magic manipulation. When the Avengers and the X-Men contemplated killing her for the sake of the world’s safety, she altered reality to give everyone their heart’s desire, resulting in a world where her father Magneto ruled (this took place in the mini-series House of M). But when Earth’s heroes began to see through the altered reality and to remember who they were, the spell was broken. In a rage against her father Magneto and the X-Men, she de-powered most of Earth’s mutant population. She would then become a pariah among both the Avengers and the X-Men. 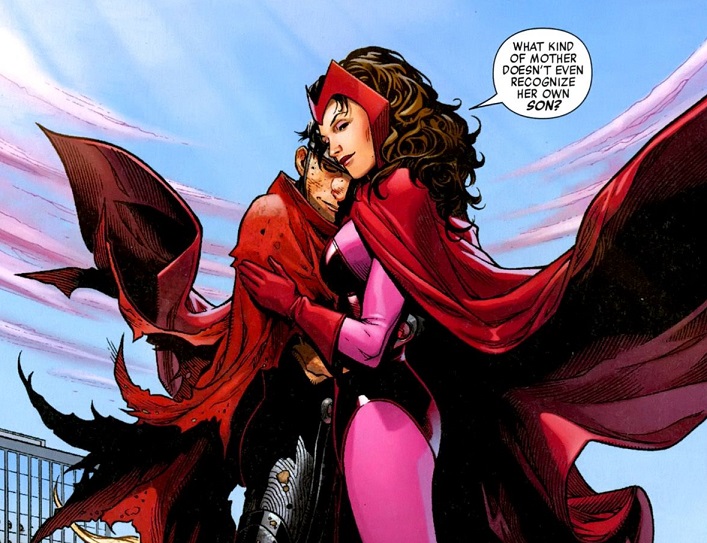 But like all good heroes who go bad, Wanda eventually got a redemption arc. And a retcon explaining why she got so powerful in the first place, after years’ worth of comics in which she was nowhere near that level of reality-altering strength. In Marvel’s Young Avengers: The Children’s Crusade, the teen heroes known as Wiccan and Speed set out on a quest for the missing Scarlet Witch. It was revealed that they were the reincarnations of Wanda’s long missing twins, Thomas and William, and that they were seeking to reunite with her. 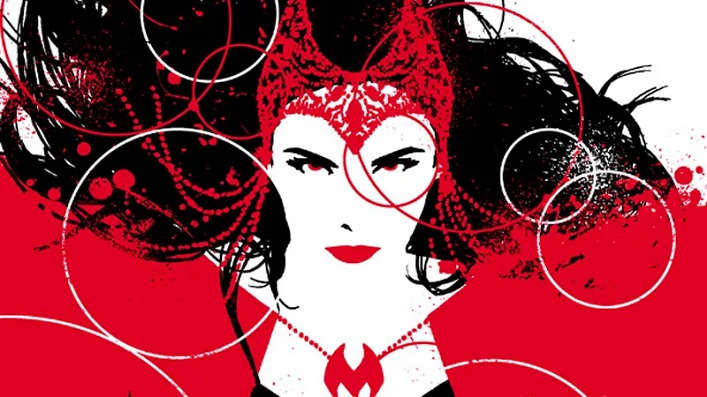 They learned that Wanda’s great power increase was made in a pact with Doctor Doom, who connected Wanda with Earth’s primal “Life Force.” She wanted the power boost in an effort to locate her missing kids, and she acted as the Life Force’s conduit. But it was all too much for a mortal, and she lost her grip on reality. This retcon explained her actions in both Avenges Disassembled and House of M. Much like Jean Grey before her, her most heinous acts were now attributed to a powerful outside force. Now free of it, she was absolved. Her powers then went back to her circa-’90s levels as well, where they’ve pretty much remained since. In 2015, Scarlet Witch got her own ongoing series where she explored the true nature of her powers, all on her own terms.

Although Wanda’s powers are fundamentally different in the MCU, it will be interesting to see how they evolve into true magic in the films. It seems likely Doctor Strange will be her tutor, much as Agatha Harkness was for her in the comics. But since the MCU does take its inspiration at least in part from those classic stories, expect to see Wanda finally embrace her Witch status in the Marvel Cinematic Universe at long last. And it’s about time.

Marvel
MCU Daredevil Arrives in SHE-HULK, but Is He Born Again or a Continuation?
Eric Diaz
4 MIN READ