Who Are the Mysterious Baby Twins in WANDAVISION?

Over the weekend, Marvel Studios dropped a very brief TV spot featuring snippets of many of the upcoming Disney+ series. Among them was WandaVision, which looks to be bonkers in all the right ways. In that clip, we see Wanda Maximoff and the Vision living out a variety of sitcom scenarios, from the ’50s/Leave It to Beaver era to a full-on ’90s/Full House aesthetic.

But this one brief glimpse is very telling, and should excite fans of Marvel’s Young Avengers comic book series. It’s the shot where we see Wanda and Vision in front of two cribs. Longtime Marvel fans know that those two cribs indicate the arrival of Wanda’s twin sons, William and Thomas. Ultimately, the boys became two very cool teenage superheroes and fan favorites to this day: Wiccan and Speed.

But how did an android and a mutant witch produce offspring? The answer is very complicated, and very comic booky. 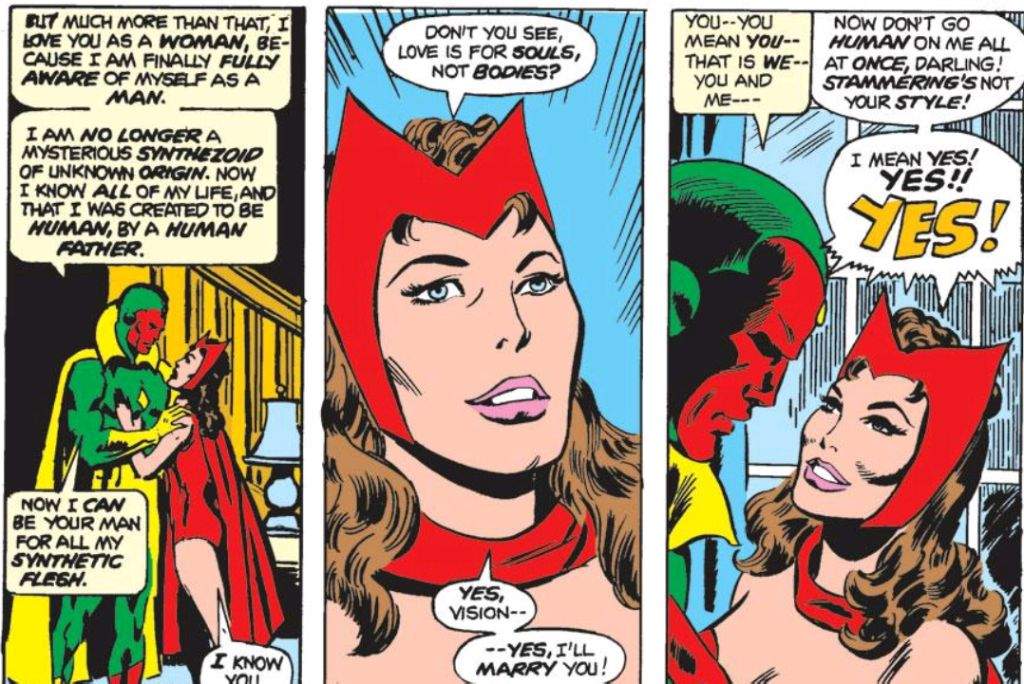 The story of Wiccan and Speed starts with the courtship and marriage of the Scarlet Witch and the Vision. The mutant sorceress (and daughter of Magneto) and the android Avenger rocked the superhero world with their unconventional relationship. The two heroes fell in love and eventually got married in the ’70s. By the mid ’80s, they retired to a life of domestic bliss in the suburbs in the Vision and the Scarlet Witch mini-series. It was during this time that they both retired from being Avengers, if only for a brief period. 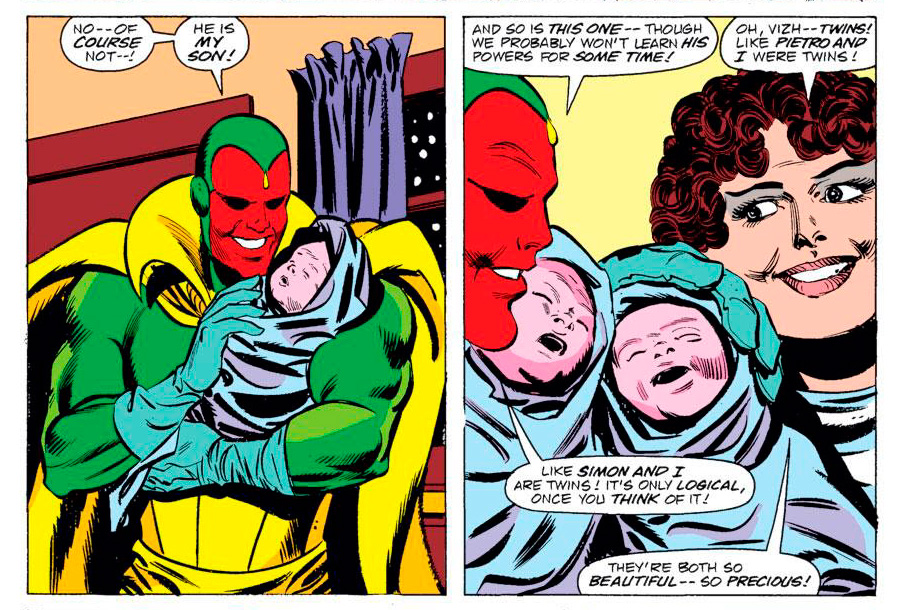 During this era, Wanda discovered that she was somehow pregnant, and with twins no less. (Doctor Strange was even on hand to deliver the twin boys, named William and Thomas.) It was revealed that she used her mutant probability altering powers to cause her own pregnancy, as her husband didn’t exactly have any DNA to pass on. And for a while, all was happy in the Wanda/Vision household. Just a regular old robot and an ordinary witch in suburban New Jersey raising kids.

Eventually, the two heroes rejoined the Avengers, and the truth about their children was revealed. Whenever Scarlet Witch and Vision were on a mission, the children’s nanny realized the kids would simply vanish. It was discovered that whenever Wanda’s mind was on something else, like her own survival in the middle of a battle, the kids simply stopped existing. It turns out, this is because they were never fully real to begin with. Wanda “created” them by altering reality to appear as if she had twin children. When she discovered this fact, the kids vanished for good, and she went into a catatonic state. 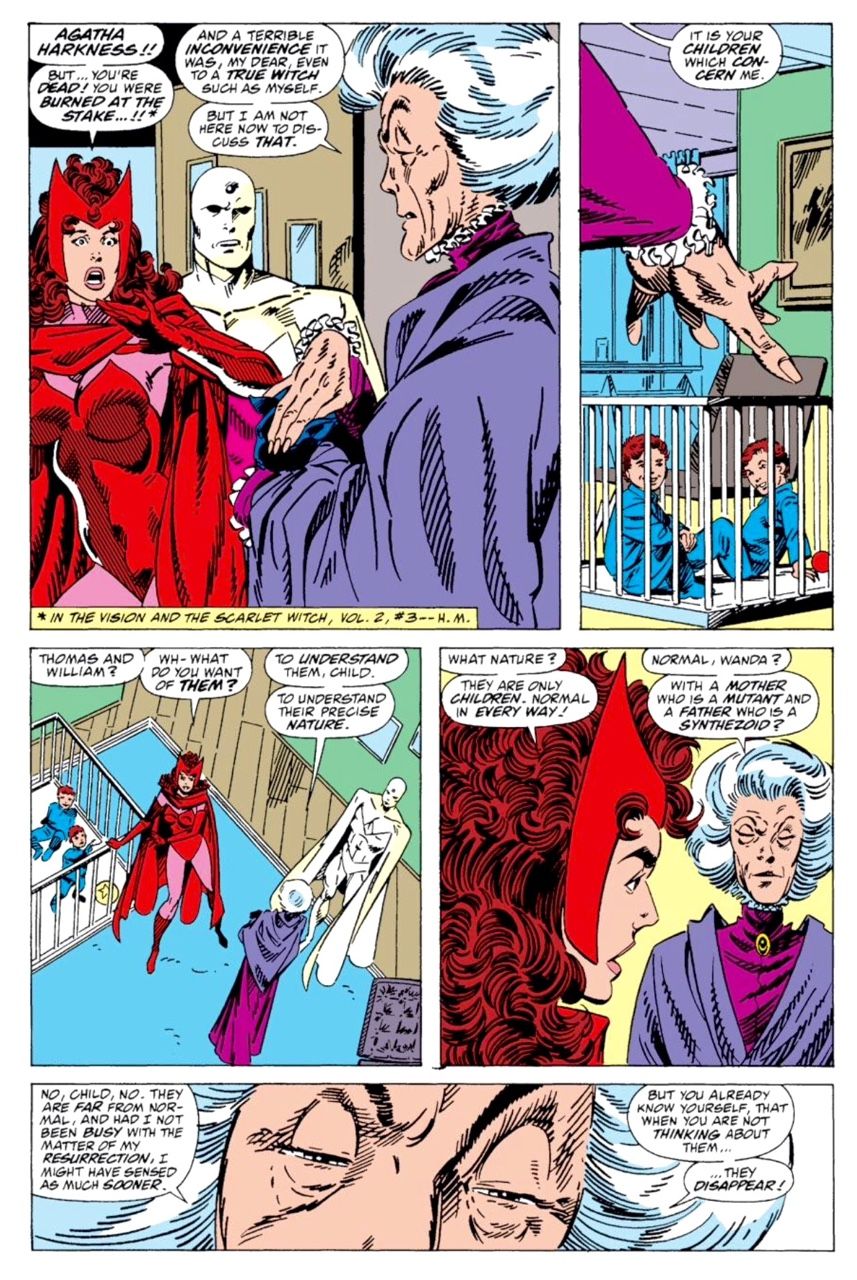 But Thomas and William weren’t exactly totally unreal. Wanda was able to give them life by using two scattered fragments of the soul of the powerful demon known as Mephisto, whose essence had been shattered by the young mutant child of the Fantastic Four, Franklin Richards. The twins’ souls were then reabsorbed back into Mephisto when he returned to life. But because of the power Wanda was able to put into her offspring, they destroyed him from within.

Their souls were then reincarnated as Thomas “Tommy” Shepherd and William “Billy” Kaplan, two ordinary American kids. It remains a mystery as to whether or not Tommy and Billy were existing teens who were essentially killed when the souls of Wanda’s kids took over their bodies, or whether their souls went back in time to be born and raised by different parents. Hopefully it’s the latter, less horrifying option. 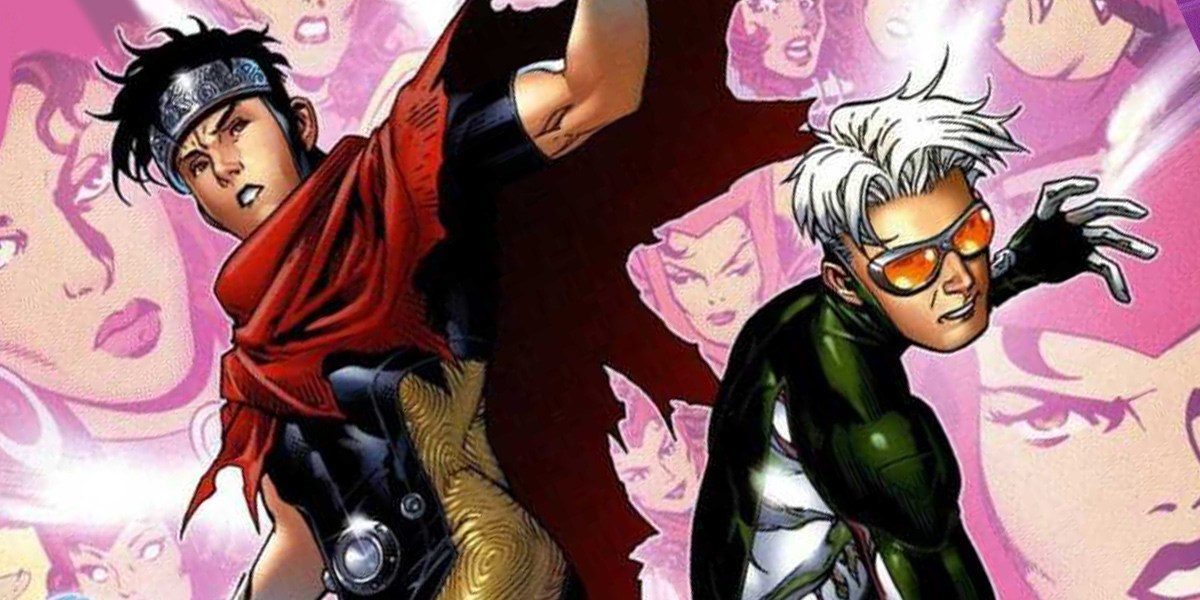 Tommy and Billy grew up separately in the New York/New Jersey area to different parents. When both were teenagers, they began to develop powers. Thomas Shepherd, the only child of a divorced couple, developed super speed, just like his uncle Quicksilver. He even inherited his uncle’s silver/white hair. Appropriately, Tommy took on the superhero name of Speed.

Billy’s powers developed after his chance meeting with Wanda. After having been beaten up by school bullies for being gay, Billy passed by the Avengers Mansion and found Scarlet Witch. Neither knew of their true connection to each other, but Wanda comforted Billy by touching his head, in turn activating his mutant powers. Billy developed the same reality-altering powers that Wanda had, allowing him to tap into magical properties.

He became the superhero Wiccan, and not long after discovered his long lost twin brother. The two became linchpin members of the Young Avengers. 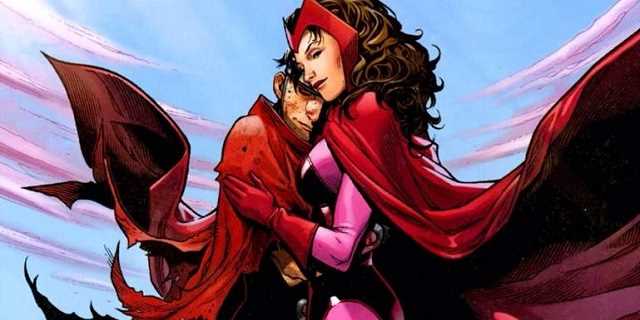 Eventually, after many reality-altering events like the Avengers Disassembled and House of M, in which Wanda essentially lost her marbles, she regained her sense of reality and her heroic status. In Avengers: The Children’s Crusade, Wiccan and Speed reunited with their mother. In this series, she finally accepted them as her long lost twin children. The Vision, on the other hand, has never really acknowledged them as his, given that they were really the sole creation of Wanda’s powers. 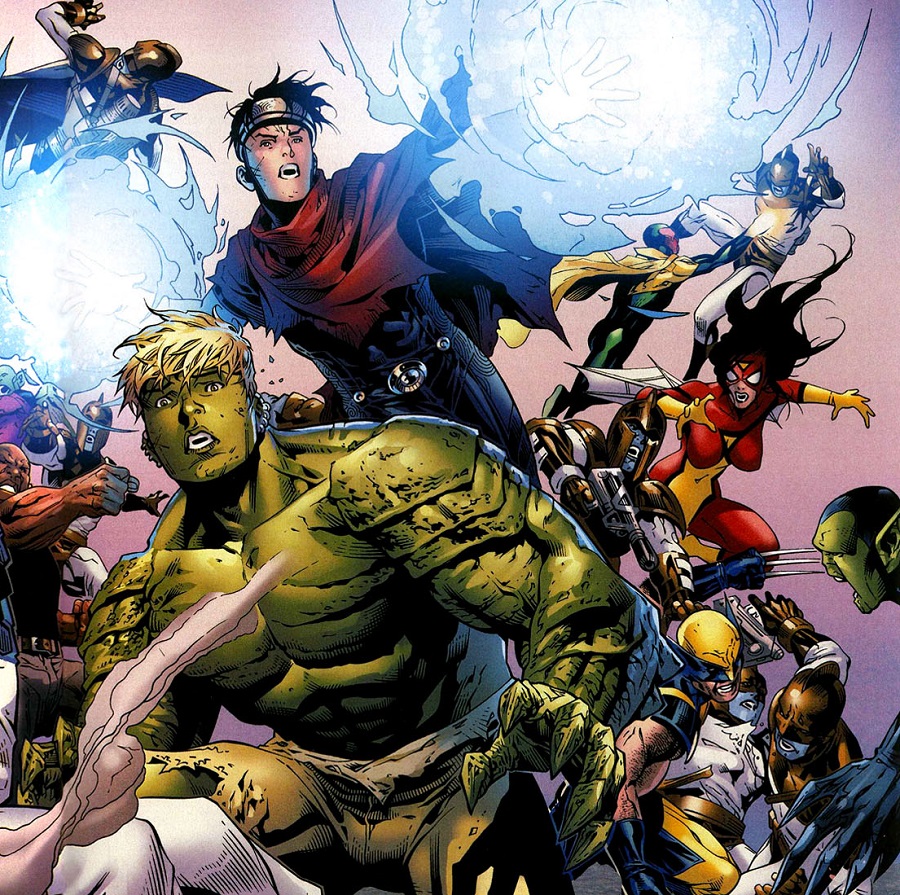 We think the introduction of Wiccan and Speed as children in WandaVision is not going to be a short-lived thing, or an Easter egg. Both characters are probably going to outlive this series, and we could see them down the line as founding members of the a live-action version of the Young Avengers. Wiccan’s boyfriend in the comics is Hulkling, the shapeshifting son of Mar-Vell and a Skrull Princess.

In Captain Marvel, Mar-Vell was gender swapped from male to female, but that doesn’t mean she couldn’t have had a son with a Skrull prince in the MCU. It seems safe to say the stage is being set for not only Wiccan and Speed to emerge in the MCU, but also Hulkling down the line. The appearance of these two cribs could signify a new and exciting chapter for the Marvel Cinematic Universe.