Who is PATRIOT? The YOUNG AVENGER Who Was Almost in BLACK PANTHER - Nerdist

Who is PATRIOT? The YOUNG AVENGER Who Was Almost in BLACK PANTHER

We’ve all been waiting for Black Panther—it’s already broken all records for presale tickets and the early responses are fantastic. And just when we thought we couldn’t be more excited, Ryan Coogler dropped the name of one of our favorite superheroes in a recent interview. “Crazy enough, for comic book fans, we toyed with the character Patriot for a little bit. Early on we were interested to get our hands on him, Joe [Robert Cole] and I, but that ended up going away so we could focus on Wakanda a little more,” Coogler told Cinemablend. So just who is the hero who could’ve starred alongside T’Challa and company in Coogler’s upcoming movie? If you’ve yet to come across Patriot, a.k.a. Eli Bradley, then you’re in for a treat.

The Patriot mantle has been held by three characters in Marvel history. First, he was a golden age hero inspired to put on the cowl by Captain America. Most recently, a new Patriot cropped up in 2017 as a part of Nick Spencer’s much maligned Secret Empire story. But it’s safe to say that Coogler was talking about Eli Bradley, created by Jim Cheung and Allan Heinberg in 2005 for their iconic Young Avengers run. The story saw the core team of the Avengers reimagined by introducing young heroes with corresponding powers, but the twist of the book was that each character had a secret and was actually much closer to a different Avenger in powerset and personality. The original team saw Iron Lad recruit Hulking, Patriot, and Wiccan to his new iteration of the team, and that was our first introduction to Eli Bradley’s iteration of Patriot. 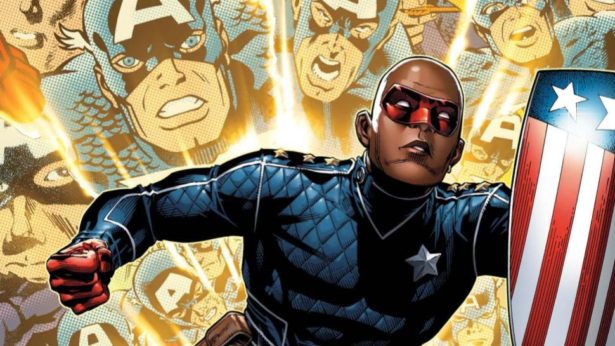 Eli joined the Young Avengers after Iron Lad tried to recruit his uncle, Josiah X, who was previously a member of the short-lived (and super underrated) Christopher Priest penned superhero team up book, The Crew. Eli joined the Young Avengers in Josiah X’s place, telling Iron Lad he gained superpowers from a blood transfusion from his grandfather. And this is where Patriot’s story gets really interesting, because Patriot is the grandson of Isaiah Bradley, who was introduced in Kyle Baker and Robert Morales’ incredible Truth: Red, White & Black. The 2003 miniseries introduced Isaiah Bradley, a survivor of brutal Super Soldier experiments on a Black regiment of the American military during WWII. The book was a parable about the horrors of the Tuskegee Experiments and the realities of the exploitation that Black people have historically experienced in the name of “science and progress.” The most radical thing about Baker and Morales’ book was that Isaiah survived all this, taking the fight directly to the Nazis and Hitler as Captain America while Steve Rogers was stuck in the Pacific.

Eli felt the legacy and responsibility of his grandfather’s suffering heavily, and was desperate to tell his story. That’s why, when Iron Lad knocked on his door that fateful day, Eli lied to him. Eli didn’t actually have any powers, but instead was using the street drug Mutant Growth Hormone, which gave users powers for a short period of time. Writer Allan Heinberg said his own experience with addiction inspired Eli’s journey. As Patriot, Eli was an important part of the team. But his deception and addiction left him feeling empty, and he ultimately left the team. By the end of the run, however, Eli rejoined and ironically ended up getting an emergency blood transfusion from his grandfather, leaving him with real superpowers. Patriot and the Young Avengers played a part in Marvel’s massive Civil War event, captured by S.H.I.E.L.D for refusing to register their powers. After most of the other Young Avengers agreed to register in exchange for amnesty, Patriot was one of the few heroes who stuck to his guns and refused to follow the Superhero Registration Act, though he was given amnesty after the event. Following Civil War, Eli searched out Bucky Barnes after learning that the former Winter Soldier had met his grandfather. The story revolved around the idea of what it means to be a Patriot when you disagree with everything that your government says and does, as well as looking back at the very first Patriot, Jeffrey Mace.

Eli became the de-facto leader of the Young Avengers during Dark Reign. The team battled Norman Osborn as he attempted to create a new team of Avengers and their Young counterparts. During this arc it was also confirmed that Eli and Kate Bishop, a.k.a Hawkeye, were dating and deeply in love. Eli’s time with the Young Avengers and the Patriot mantle came to end after Avengers: The Children’s Crusade, when he left the team after attempting to stop Scarlet Witch from going back on her “no more mutants” spell which left millions of mutants de-powered. Eli was scared of the ramifications of mutants gaining their powers back with no warning or preparation, but the interaction ended up with Doctor Doom gaining Wanda’s omniscient powers instead.

Eli was an incredible part of the Young Avengers, but was last heard of during Jamie McKelvie, Matt Wilson, and Kieron Gillen’s fantastic Young Avengers relaunch in 2013. When that iteration of the lineup was being stalked by a character in the Patriot costume, the team contacted his mother, who informed them that Eli was bedridden and ill. As we’ve now seen Rayshaun Lucas take on the Patriot mantle, we’d love to see Eli brought to life on the big screen. Though he won’t be making an appearance in Black Panther, we dream that a Young Avengers movie might not be too far away!

Is Patriot one of your favorite Marvel heroes? Do you wish he was making an appearance in Wakanda? Or just super excited to see Black Panther hit the big screen? Let us know below!