The History of Marvel’s ETERNALS Explained

Expect the Marvel Cinematic Universe to get a whole lot weirder in 2021 with the release of Chloe Zhao’s Eternals. Based on the genuinely bonkers creations of Jack Kirby, the Eternals are a godlike race of cosmic beings who have secretly lived among us on Earth since time immemorial. On today’s episode of Explainiac, we delve deep into the oddball history of Marvel’s Eternals before the film hits theaters on November 6, 2020.

But the biggest question most Marvel fans have about the Eternals is the same one most of us had when Guardians of the Galaxy was first announced:

The Eternals are the weirdo brainchildren of Jack Kirby. Back in 1970, King Kirby left Marvel to go work at DC Comics where he created the New Gods and the Fourth World, a sprawling sci-fi saga about warring pantheons of gods, which coincidentally is also making its way to the big screen in the next few years.

Dubbed The Eternals, the series, which was also ultimately canceled before Kirby could end it on his own terms, laid the groundwork for much subsequent Marvel Comics mythology. The Eternals #1 debuted in 1976 and took us into an archeological dig in the Andes Mountains where Kirby laid out the central conflict of the series. 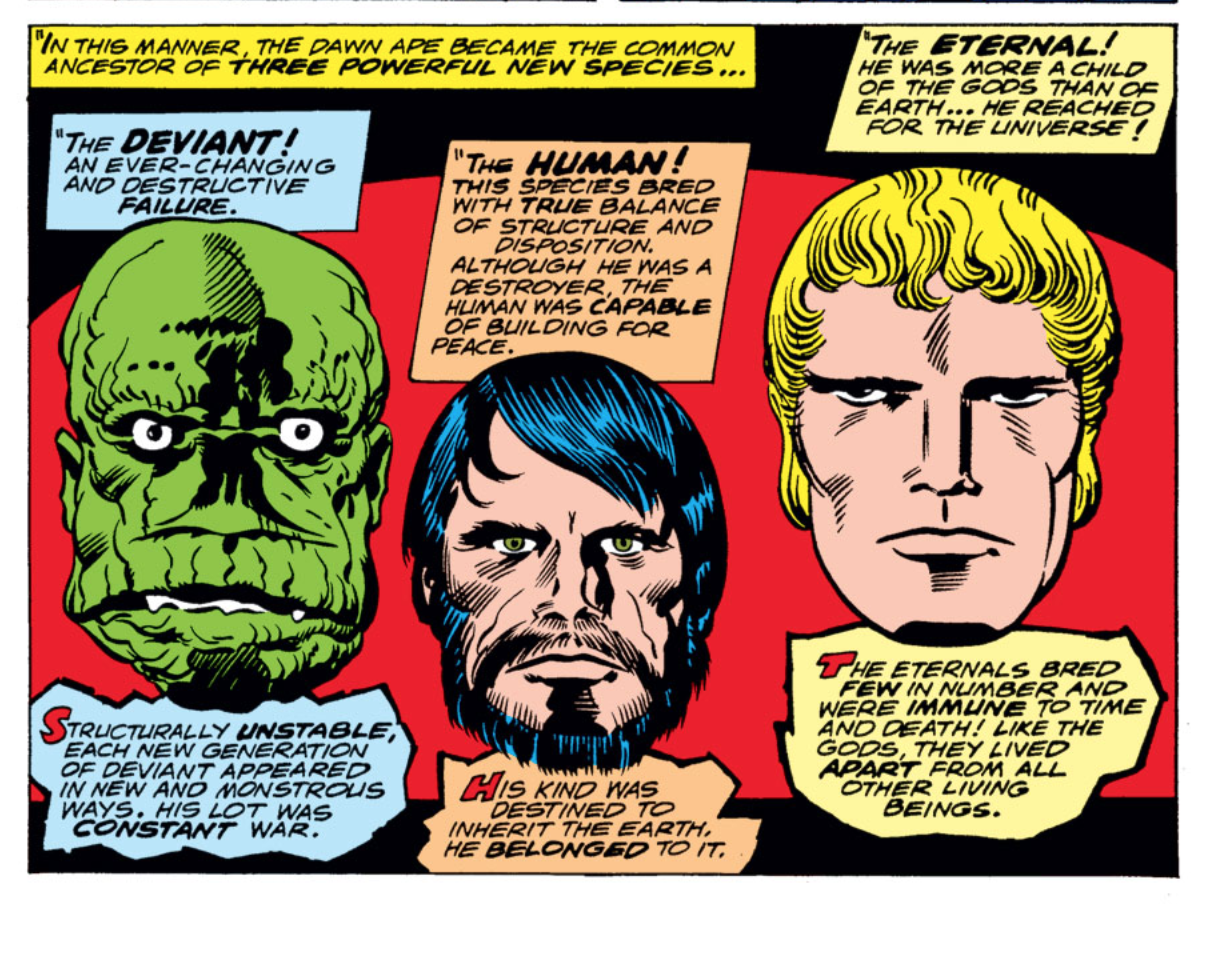 Omnipotent, godlike beings in massive robot bodies known as the Celestials visited Earth millions of years before the dawn of mankind. You may remember them from Guardians of the Galaxy when we saw a Celestial use the Power Stone to wipe out an entire planet. But in Earth’s case, they decided to play a messed-up version of The Sims, performing some “cosmic chemistry” on apes to create “three powerful new species.”

The Deviants: These guys are basically horrifying monster-men who live underground. Evolutionary incels who create weapons of mass destruction and never ever moisturize.

The Humans: That’s us! Humans wound up basically trashing the joint through greed and violence, but that’s neither here nor there. We just suck and Jack Kirby knows it.

The Eternals: These, our ostensible heroes, are aloof, ageless beings with incredible powers who were regarded with equal parts “awe and fear” by the human societies who encountered them. The Celestials tasked them with defending the humans from the Deviants and then promptly peaced out to the stars.

Meanwhile, back on Earth, when Kronos perished in an unfortunate cosmic energy accident, his sons Zuras and A’Lars formed a Uni-Mind–basically a mind meld that allows multiple Eternals to act as one being–to determine a new ruler. Zuras won out and A’Lar left Earth to avoid any future conflicts, settling down on the Eternals colony on Titan, which had been through the wringer, where he met a woman named Sui-San and basically repopulated the entire planet. 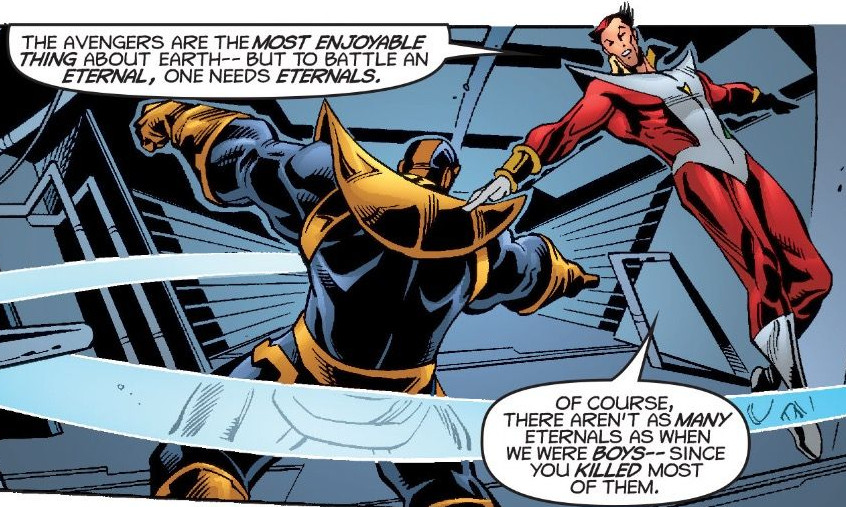 You may have heard of two of their offspring: Starfox (or Eros if you’re nasty) and Thanos. And no, not that Starfox, but yes that Thanos. Fun fact: Thanos is actually an Eternal with something known as Deviant Syndrome, which causes him to look like a Crossfit California Raisin instead of a conventionally hot godlike being. So there’s a neat little connection to the Marvel Cinematic Universe right off the bat.

Back on Earth, the Eternals created the mighty cities of Olympia in the mountains of Greece, Polaria in the Siberian tundra, and Oceana in the Pacific Ocean. These Eternals on Earth form the basis of most modern human mythology in the Marvel Universe. They are revered and feared as gods, whereas the Deviants were largely responsible for tall tales of monsters, demons, and devils. The two groups would battle for many years before eventually settling on a mutual non-aggression pact until the Celestials returned. And return did they ever.

Our first introduction to this conflict comes through the eyes of Ike Harris, a weird-looking dude in a hat and sunglasses, who–surprise, surprise–turns out to be an Eternal named Ikaris. Played by Richard Madden in the movie, Ikaris possesses a wealth of powers including superhuman strength, flight, cosmic energy beams that shoot from his eyes, teleportation, and many more. Most useful of all, he possesses the power of exposition, which he displays again and again in the series’ first issues. 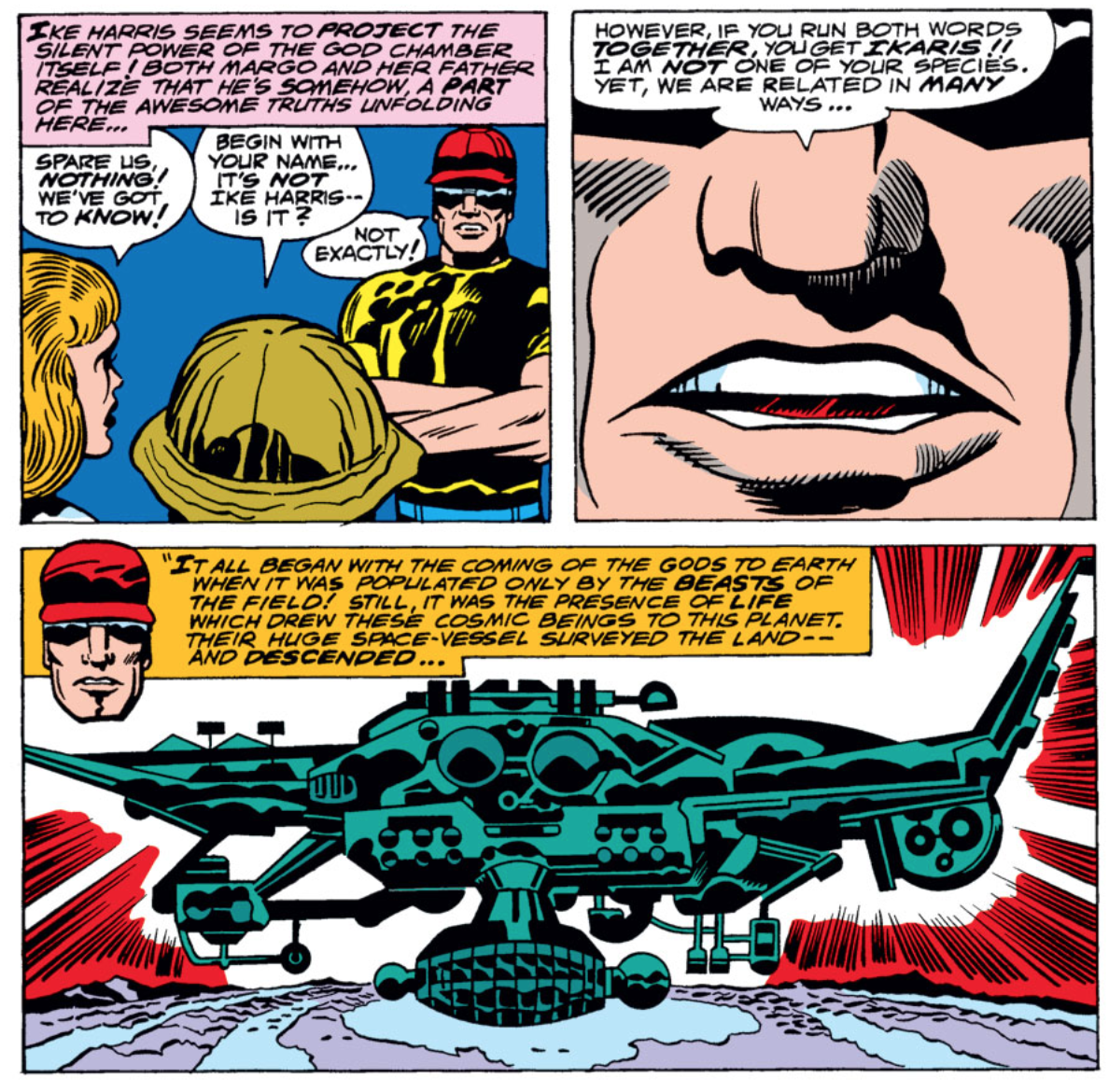 While aiding the archeologist Dr. Daniel Damian and his daughter Margo on an expedition in the Andes, Ikaris discovers a god chamber from the Incan Empire that could be used to summon the Celestials to Earth. This, of course, invokes the wrath of the Deviants, who send a devilish doofus named Kro to try and prevent the signal from going out. What follows is a brief fight scene in which Ikaris reveals his superpowers and is promptly defeated by a gun that launches a poncho at him. You know, because comics.

Ultimately, one of the mighty Celestials, Arishem, leader of the Fourth Host, lands on a giant pylon where he will stand for 50 years before rendering judgment on all of the Earth. Obviously this situation is what scientists call “not great,” so Ikaris must reunite with his fellow Eternals to help fend off Deviant incursions and figure out a way to spare humanity from the Celestial’s wrath.

To do so, Ikaris recruits Eternals like Sersi, Makkari and Thena to help save the day. Before the Celestials can deliver their judgement, the Deviants try to bomb their mothership, which would basically guarantee a “guilty as charged” obliteration verdict. Fortunately, our heroes manage to stop them before they can execute their dastardly plot and thus save the Earth. 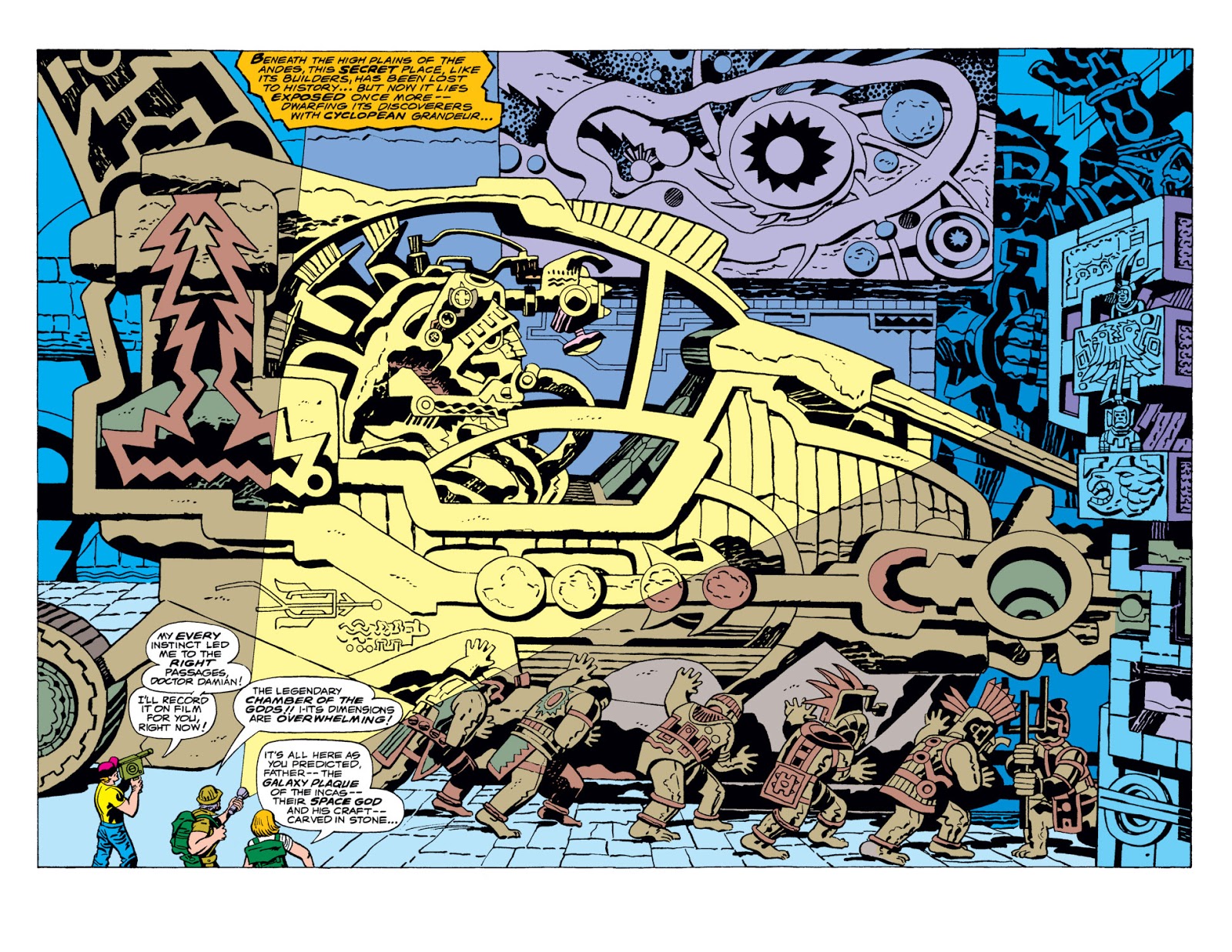 While Chloe Zhao might pursue this avenue for her big screen adaptation, far likelier inspiration might come from Neil Gaiman and John Romita Jr.’s 2006 Eternals mini-series. In this modern adaptation, the Eternals can no longer recall who they are. This collective amnesia is the result of mental manipulation by one of their own — Sprite, an Eternal who’s trapped in the body of an 11-year-old for all time. As the only one who remembers the Eternals’ true identities, Ikaris must once more help his friends remember who they are and prevent a newly awakened Dreaming Celestial from judging all of humanity before it’s too late.

As for the Eternals themselves, let me quickly run down who we’re going to be seeing on the big screen:

As for Game of Thrones alum Kit Harington, well, he’s playing Dane Whitman, a.k.a. Black Knight, an armor-clad superhero wielding a mystical sword who is Sersi’s longtime love interest. Unfortunately for them, a man named Proctor, who was secretly another reality’s version of Dane Whitman, began trying to murder Sersi in every reality across the multiverse after getting rejected by the Sersi in his own dimension But that is a story for another episode.

We’ll just have to wait until November 6, 2020 to see for ourselves. But in the meantime, tell me — what Eternals story do you most want to see on the big screen? Which of the Eternals is your favorite? Let me know in the comments below.

If you want even more Marvel goodness, check out past episodes of Explainiac right now wherever fine Nerdist content is streamed.