With all the news coming out of D23 last weekend, you might’ve missed the release of the first poster for the upcoming Disney+ Scarlet Witch and Vision TV show WandaVision. Even if you did catch the 1950s-influenced one-sheet, it’s possible you looked over the looming shadows in the corner that look intriguingly familiar to fans of the classic pair and their comics history. 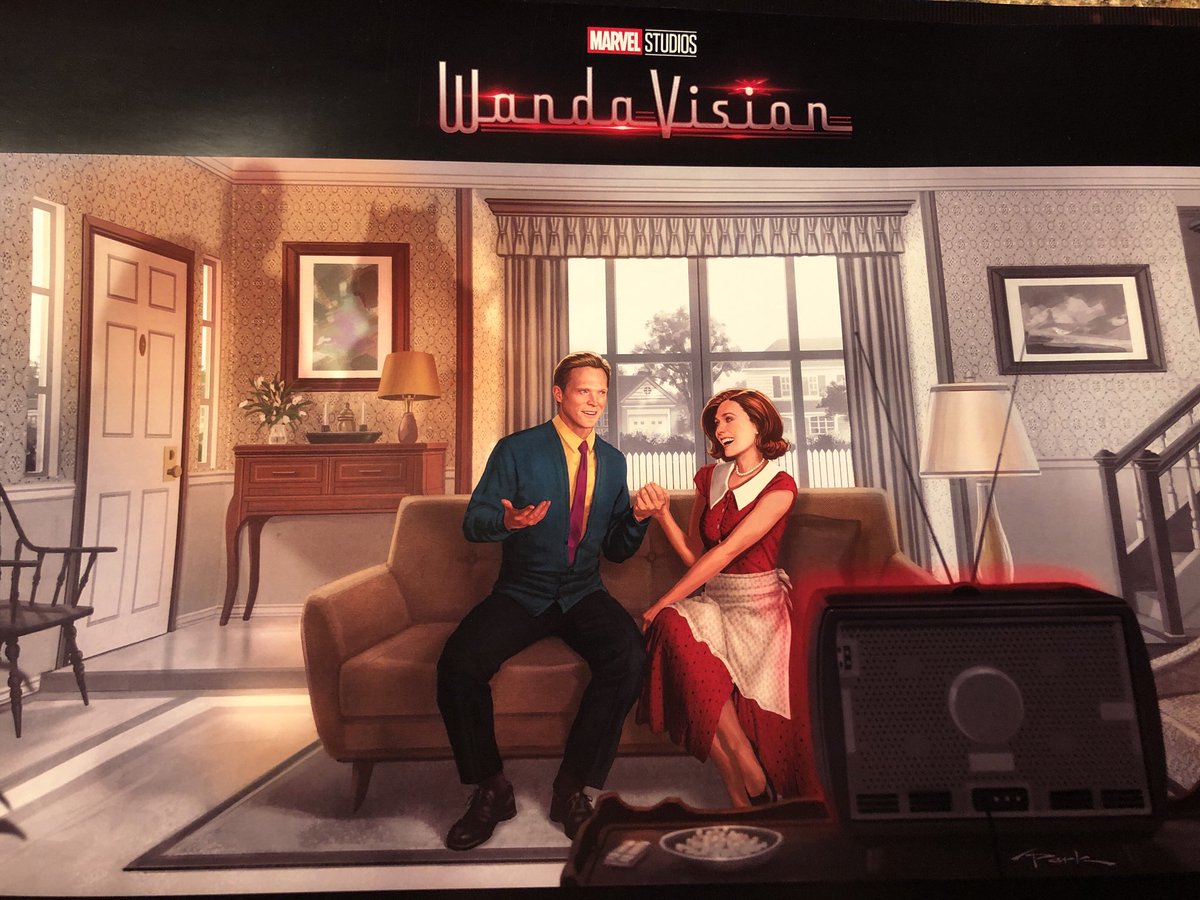 There’s been a lot of speculation about what the show will center on, especially because–as far as fans know–Vision died during the finale of Avengers: Infinity War and has yet to return. That plot point is actually foundational to our theory about the show,which Paul Bettany recently described as “a mashup between a couple of our favorite comics that will remain nameless.” Though he didn’t want to spill, we’re betting those books are West Coast Avengers and The Vision, and the gorgeous new poster holds some hints that we’re probably right.

With Vision apparently out of action and Wanda devastated by it, it might seem like a strange time to craft a show based on the two of them. But actually, it fits in perfectly with some of the most popular Vision and Wanda stories. Scarlet Witch’s powers are reality-based and throughout her comic book history she’s utilized them to craft alternate worlds, universes, and even families, like in the ’80s West Coast Avengers run that will likely play a large part in the narrative of the show. During the arc, Wanda and Vision had a pair of sons named William and Thomas. But due to Vision being an android, Wanda “conceived using magic” which you can imagine didn’t exactly end well. The tragedy of the pair truly came to pass when Vision was dismantled, only to return as a soulless android known as “white” or “spectral” Vision. 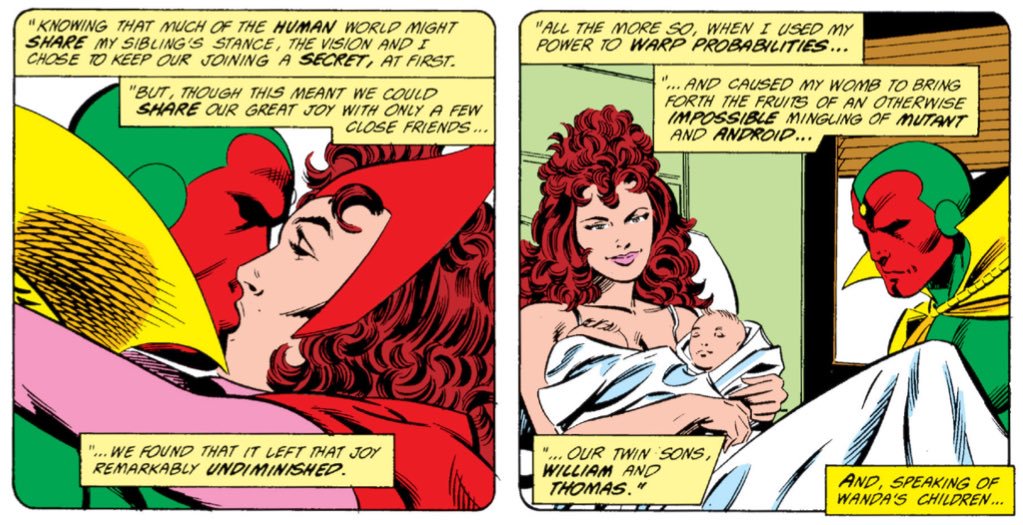 The concept of White Vision returning after Infinity War has been a fan-favorite theory, and it does seem pretty likely, especially as that’s probably not an outcome that Wanda would be too happy with and that could easily lead to her crafting an idyllic Americana-influenced family life to distract her from the horrors of reality. We know that the events of WandaVision will directly affect the Doctor Strange sequel, which is subtitled “In the Multiverse of Madness,” so the idea of Wanda creating or causing the titular Multiverse of Madness is pretty likely. If you look behind Wanda and Human-Vision (who we’ve only seen before in Wanda’s mind), you’ll notice two shadows. Though some fans have theorized that they reflect the characters’ classic costumes, we also see something else that has far more sinister ramifications.

Though it’s easy to see the spiked shadow and think of Scarlet Witch’s iconic red costume, it also looks like it could be the outline of a terrifying Marvel character who played a key part in the madness of Scarlet Witch. After coming to terms with the death of her beloved Vision and the fact that his memories cannot be rewritten–as Wonder Man will not agree to use his brain patterns again to create his mind, which could easily be replaced with the fact that Tony is now dead so Vision cannot be recreated–Wanda has to deal with the fact that her children are actually shards of the villainous demon Master Pandemonium’s soul. If you look at Pandemonium’s mask, it fits into the shadow behind the pair just as well as Wanda’s classic headdress and hints that their children may be involved in the dreamworld Wanda creates. 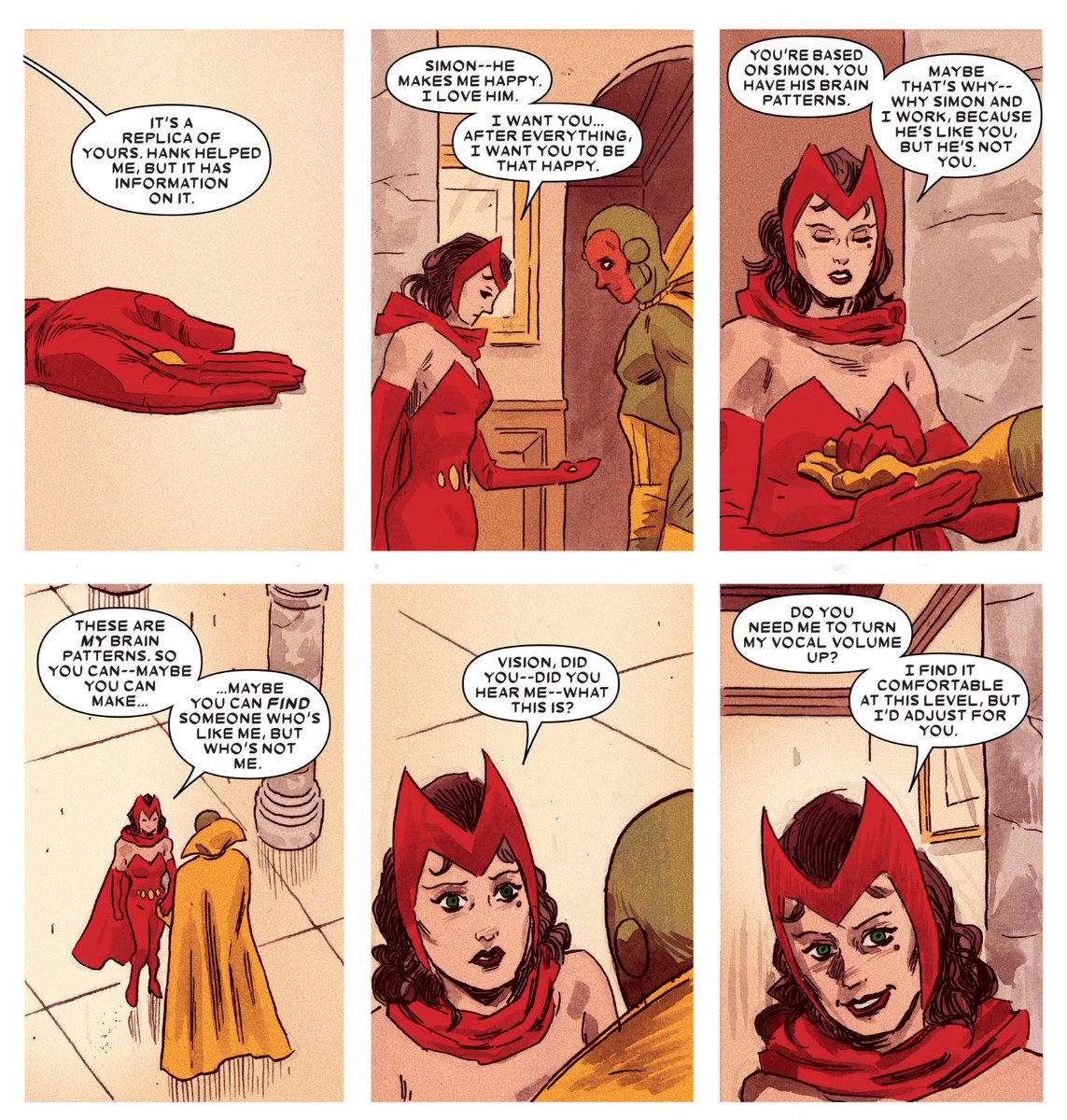 The other key comic book Bettany was alluding to is almost certainly Tom King, Gabriel Walta, and Jordie Bellaire’s The Vision. The lauded–if flawed–comic centered on Vision trying to live a normal life in suburban America with a wife and two children that he created, though that plan was quickly dismantled when his synthezoid partner–who was made using the brain patterns of Wanda–murdered the villain known as the Grim Reaper at the end of the first issue. The suburban sweetness of the poster is most likely a reflection of this comic’s setting and hints at the unsettling events to come. King, guest artist Michael Walsh, and Bellaire explore the past of Vision and Wanda during a powerful potted history in issue #7, which would be an easy template for the series to borrow if they’re worried about getting into the in-depth canon of the pair.

Whatever route the series takes, we will likely see Wanda and Vision living in a dream of Wanda’s making, as well as the potential introduction of their children, whether magic or synthezoid. We’re betting on the former as it would be a way to seed the inevitable, eventual Young Avengers series as both their sons Wiccan and Speed play vital roles in those comics.

We’ll find out when the show hits the massive streamer in 2021.