THE NEW GODS: A Primer On DC Comics’ Cosmic Mythology

It’s just been announced that The New Gods are on their way to the big screen, via A Wrinkle In Time director Ava DuVernay. If you are wondering “who the heck are the New Gods??” we are here to help. Created by comics legend Jack Kirby, The New Gods was a vast, cosmic space opera mixing sci-fi with mythology, and was sometimes also referred to as “The Fourth World.” It was Kirby’s first work for DC Comics after leaving Marvel Comics after a massively successful decade collaborating with Stan Lee, and basically creating the Marvel Universe as we know it. Over time, the New Gods mythology became a cornerstone of the entire DCU. The New Gods and its related titles dealt with the battle between good and evil as represented by the alien worlds of New Genesis and Apokolips. Darkseid was the evil lord of Apokolips, whose goal in life was to seek out the Anti-Life Equation which would allow him to exert his will over every sentient being. Opposing him is Orion, his son raised by Highfather, leader of the planet New Genesis. Other titles in the extended New Gods mythology included The Forever People and Mister Miracle, about the son of Highfather who was born on New Genesis but raised on Apokolips, and who overcame a hellish childhood to become the Earth’s greatest escape artist. 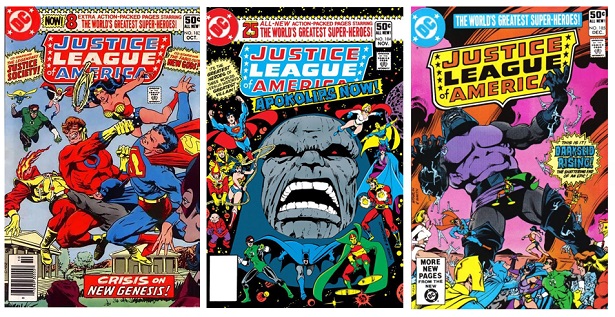 The original run of Jack Kirby comics was not only relatively short lived– lasting from only 1970 to 1972–it was also mostly self contained, involving only Superman from the main DC Universe. Then, starting in the early ’80s, DC realized what a treasure trove of characters and concepts Jack Kirby had really left them, and began incorporating them into the DCU. The first example of this was a 1980 Justice League of America storyline, which found the JLA teaming up with the Justice Society to stop Darkseid from replacing Earth-Two (home of the JSA) with his homeworld of Apokolips. A couple of years later, 1982, DC’s long-running Legion of Super-Heroes title, then one of the publisher’s most best selling titles, did what remains to this day their most popular storyline, “The Great Darkness Saga,” which saw the teens from the 30th Century facing off against a resurrected Darkseid and his minions. The same year, DC decided to cross over their biggest selling title, The New Teen Titans, with Marvel’s X-Men. And the villains for this epic crossover were Dark Phoenix, and Darkseid, once again showing how DC was now positioning him as their biggest bad. 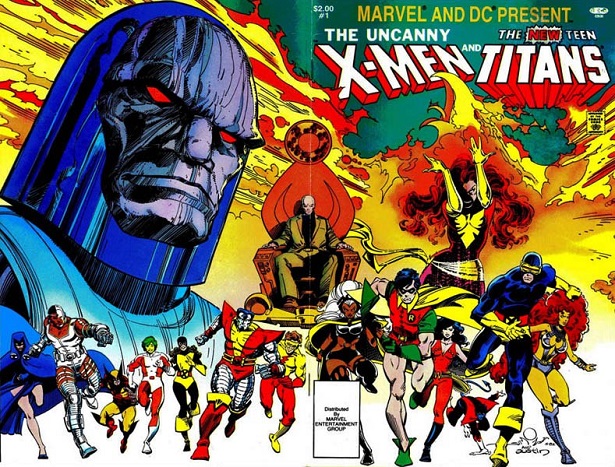 In 1984, DC partnered with Kenner Toys to create a toyline based around their characters called Super Powers. The toys featured the Justice League as the heroes, naturally, and the villains were mainly composed of Darkseid and his minions — chiefly,  DeSaad, his son Kalibak, and his army of Parademons. On the good guy side, Orion and Mister Miracle were included as part of the line-up, despite their limited exposure in the mainstream. The long-running Super Friends animated series introduced Darkseid and his lackeys from Apokolips as the primary antagonists, exposing the Kirby mythology to millions of kids. After Crisis on Infinite Earths, DC’s second big company-wide crossover was published in 1986. Called Legends, which had Darkseid as the primary antagonist, sending his minion Glorious Godfrey to Earth to pose as a TV talk show host, where he would use his powers to turn the will of the common people against the heroes of Earth. All of these things continued to cement the New Gods mythology into the DC Universe in a big way.

The next major New Gods appearance in the DCU was the 1988 mini-series Cosmic Odyssey, which was illustrated by a young, pre-Hellboy Mike Mignola, and prominently featured the Jack Kirby Fourth World mythology, and Highfather, Orion, Lightray and Darkseid were main characters alongside the Justice League. By the late ’80s and early 90s, The New Gods would receive their own title again, as would Mister Miracle. Darkseid would set himself up as one of Wonder Woman’s main antagonists in the mid ’90s, when he invaded her homeland of Themyscira, attempting to beat the Amazons into submission, and force them to tell him how to gain access to Mount Olympus and the Greek Gods. He killed almost half the Amazon nation, forever marking him as one of Wonder Woman’s primary villains. By the late ’90s, a Jack Kirby’s Fourth World series was launched. Grant Morrison’s seminal run on JLA featured Darkseid and many allusions to the Kirby mythos, and he even added Orion and Mr. Miracle’s wife Big Barda to the League during their most popular run.

The New Gods mythos would once again be introduced to a much wider audience, when they would appear as fixtures of the DC Animated Universe, starting in the late ’90s with Superman: The Animated Series, and continuing on to Justice League and Justice League Unlimited. Darkseid’s voice on those shows was character actor Michael Ironside, and he is who a generation of fans hear in their heads whenever Darkseid appears in a comic book, thanks to his iconic portrayal.

In the late 2000s, DC decided to kill off the New Gods, in the appropriately titled Death of the New Gods mini-series. They were quickly resurrected in human form on Earth, and Darkseid was the main villain if DC’s epic Final Crisis. They would all be reborn again in DC’s New 52 initiative, when the entire DC Universe would be rebooted, and Darkseid and his Parademon army were the first villains to square off against the newly formed Justice League. 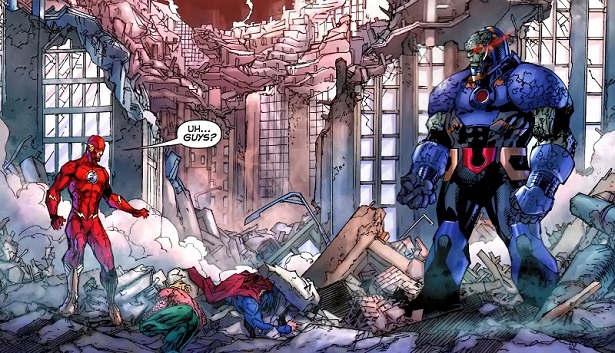 So, as you can see, the New Gods are central to the DCU, and the last forty five years of publishing from DC Comics simply wouldn’t have been the same without them. How they will fit into DC’s movie universe remains to be seen, but you can’t ever say that Jack “the King” Kirby didn’t leave Hollywood with a wonderful sandbox full of toys.

What do you want to see out of a New Gods big screen adaptation? Let us know down below in the comments.