It may seem unlikely, but Disney fandom and horror fandom often intersect. If you think about it, it’s not all that weird. Classic Disney animated films are filled with fantastic villains akin to the monsters of horror cinema. And long before most of us have ever seen a scary movie, we had our socks scared off of us by something in a cartoon.

Now, one artist has brought those worlds together at last. Pop artist Jose Rodolfo Loaiza Ontiveros incorporates Disney iconography with iconic horror characters, and the results are magic. Dark magic, that is. Check out some of our favorites from the artist’s Instagram account right here:

Ariel has seemingly wandered into the wrong lagoon. Our favorite mermaid has an encounter with the infamous creature and Universal Monsters icon. We don’t think the undersea princess wants to be part of this world.

“They all float.” Even in the 100 Acre Wood! Pennywise never had it so good.

The Blue Fairy turned Pinocchio into a real boy. But maybe she should have left this Chucky doll on the shelf as is. He doesn’t seem very grateful for getting brought to life, now does he?

The seven dwarfs need to call the Exorcist. Because they have a guest upstairs in their cottage, and it’s not Snow White.

Speaking of Snow White, her scary adventure in the forest seems to be adjacent to Camp Crystal Lake. The evil Queen doesn’t seem so bad in comparison with Jason Voorhees.

Sleeping Beauty better watch out. Because one, two, Freddy’s comin’ for you.

Maleficent and Cruella have a new makeover project, and his name is Franky.

Ariel can’t speak in her human form. But can Ghostface get her to scream?

Having killed everyone in Haddonfield, Michael Myers now turns his attentions to Neverland. 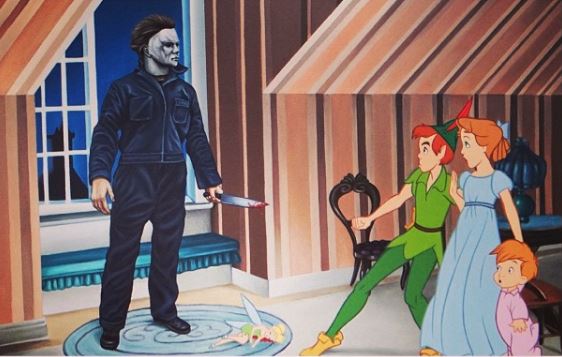 Jose Rodolfo Loaiza Ontiveros has a new show called Horror & Fame, which the artist describes as exploring “the fine line between the glamorous world of celebrities and the disturbing world of horror.” It’s running until April 3 at the Corey Helford Gallery in Los Angeles. For more information, click here. And to check out more of artwork, be sure to head on over to his Instagram and Facebook pages.