Every Easter Egg from LOKI’s Premiere

We can hardly believe it’s been less than two months since The Falcon and the Winter Soldier left us with a new Captain America and no Easter eggs to break down each week. Luckily, the God of Mischief is here to fix that. Yep, the first episode of the latest Disney+ MCU TV series, Loki, is stacked with a ton of deep-cut comic book references, some killer Easter eggs, and a surprising amount of emotionally driven philosophical meandering. And we’re burdened with the glorious purpose of breaking it down! 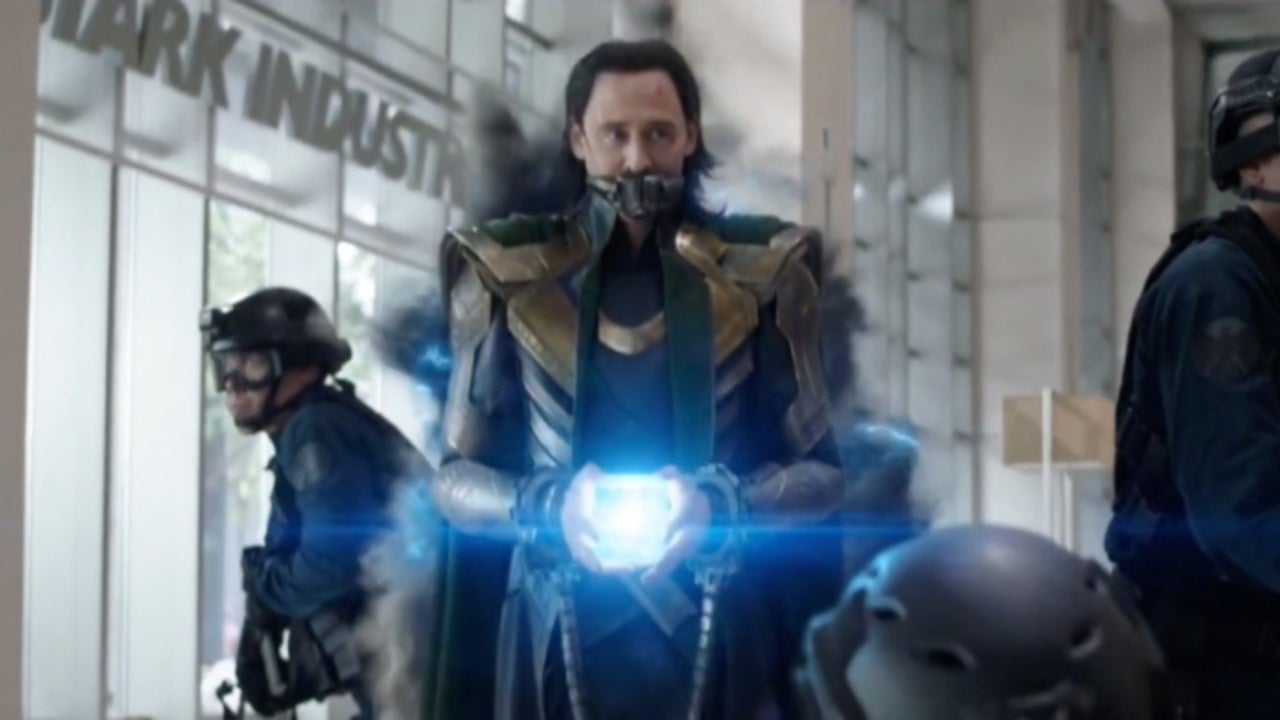 Just in case you weren’t sure where Loki begins, we get a flashback to the moment from Endgame which sparked the series. When the Avengers try to get the Tesseract, it’s knocked on the floor by a very angry Hulk. Loki uses the moment to steal it and throw himself through time, which is how he ends up in Mongolia, about to make a familiar proclamation.

“I am burdened with glorious purpose!”

After landing in the Gobi Desert, he introduces himself with the iconic line from The Avengers. It’s a nice bit of foreshadowing of his journey to come, especially in the context of the personal growth that he has yet to embark on—this is 2012 Loki, after all. It’s also really funny as he’s shut down pretty quickly by the locals and then the arrival of the Time Variance Authority (TVA).

Probably one of the funniest jokes from Loki so far is that each timeline criminal is called a Variant. This is not only because they’re a variant version of their original self, but it’s also a very good joke about the comic book industry. Variant covers have become a contentious aspect of the comic book business, both a blessing and a bane on comic shop owners. Good stuff. 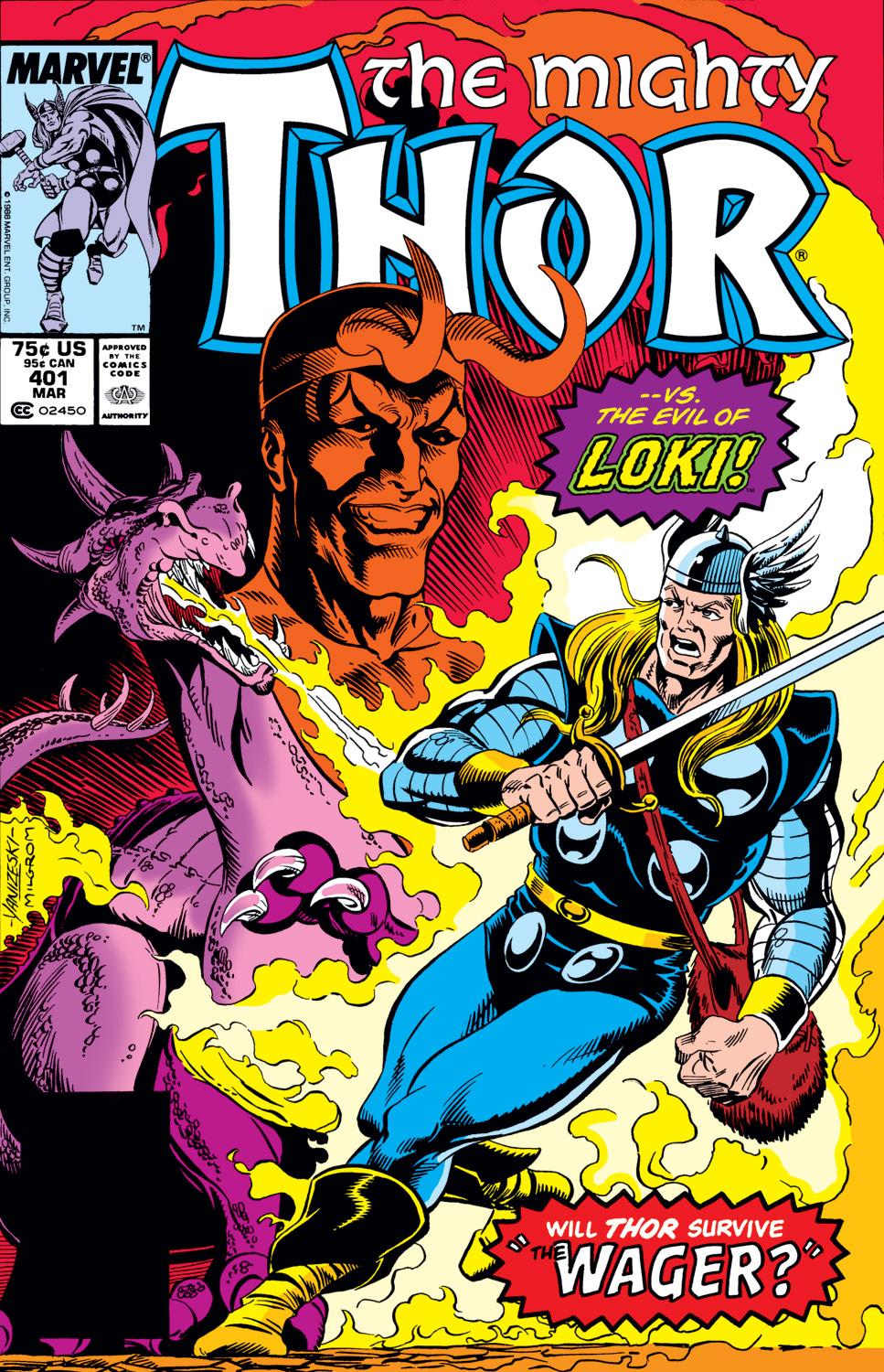 As she accosts Loki, Hunter B-15’s little screen shows “4.01.” This number works as both April Fools Day—Loki is the trickster god!—and a reference to Thor #401. That issue sees young Thor accepting a wager from Loki. Interestingly, it’s also set a thousand years in the past, which fits with the show’s timeline-shifting shenanigans.

We get an unexpected X-Men connection here. In the comics, Tanya Trask—the daughter of the creator of the Sentinels, Bolivar Trask—is Madame Sanctity, the Guardian of the Sacred Timeline. This comes from the ’90s Cable comics. That’s relevant here as Cable is one of Marvel’s most famous time-travelers and timeline-jumpers. So, basically, they’re mining anything timeline-centric.

The Hexagons Are Back, Baby!

If you recall our WandaVision coverage, we were very interested in the hexagons! And there are some here, the most prominent being an eye poster in the TVA. The PSA sign features a stylized eye with a pupil shaped like a hexagon. There are also hexagons on the Kree warriors we see in Miss Minutes’ educational video!

The video that Miss Minutes uses to teach us looks vintage. And it seems to specifically take from the car safety propaganda cartoons from the 1950s. Your Safety First from the Automobile Manufacturers of America and Magic Highway USA from Disney seem particularly influential.

In a very interesting video, Miss Minutes tells us about the history of the multiverse. It begins with multiple universes battling each other. The streams of color we see are reminiscent of the Infinity Gems. That’s relevant because in the comics the gems are remnants of previous versions of the universe, which seems close to this version of the timeline…

The Nexus Events Are Occurring

WandaVision introduced us to the concept of Nexus events and possibly Nexus beings. In Loki, the former is a key recurring part of the plot. Here that term is used to describe a Variant going through history and changing it, which happens a lot  in Loki.

In a nice nod to the Comics Code Authority, we see that the people in charge of retelling the history of the TVA are the Time Variance Authority Narrative Commission. Like the Comics Code, they seem to be a self-censorship and approval body that decides what stories from time can and can’t be told and how they should be presented. They even have a little seal that’s reminiscent of the CCA stamp that we used to see on most comic books.

In the comics, they’re the time-stream police. Here, they’re the lower ranking TVA soldiers. The robot/cyborgs first appeared in Fantastic Four #352 in 1991. Could we see the TVA’s Minutemen revealed as robots later? We wouldn’t count it out after that little conversation that Loki has about the robot killing machine he has to walk through to enter.

One of Loki’s fellow Variants uses this term to insult a Minuteman. While it’s a Marvel Comics Easter egg, it’s a reference to a different character completely. In the comics, this is the nickname of the hero known as Nova.

Mephisto, Is That You?

Sorry, we couldn’t help ourselves. During their jaunt to 15th century France, Mobius M. Mobius sees a stained glass window with a devil on it. The little kid that he’s interrogating points at it and claims that’s who’s to blame for the Nexus event. While it likely isn’t Mephisto, we couldn’t not mention the cheeky devil who haunted Dan throughout WandaVision. 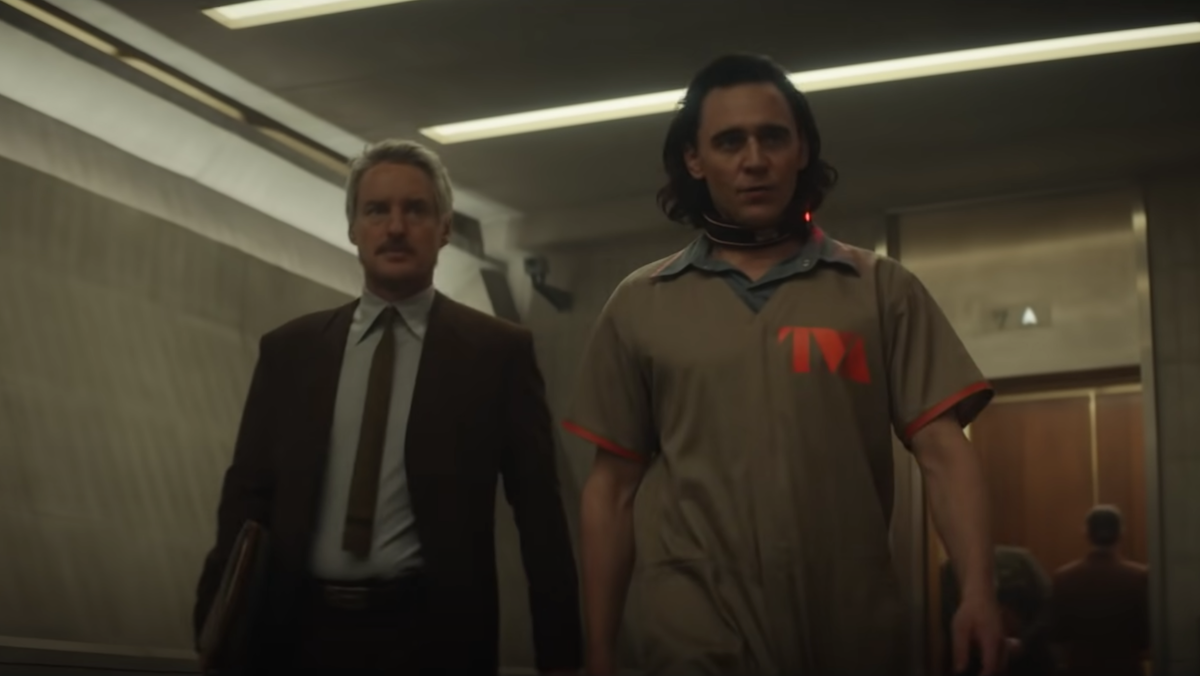 Speaking of the TVA manager in charge of Loki’s adventures, the character himself is an Easter egg. In the 1991, Fantastic Four Annual #24 revealed that each of the cloned TVA managers are based on longtime Marvel writer Mark Gruenwald, and later Tom DeFalco. The most famous example is Mobius, who is a Gruenwald clone.

There are two nice little Easter eggs in Loki’s TVA file. The first of which will likely come into play as the show moves forward.

Sex: Fluid—This note confirms that MCU Loki follows the canon of comics and is gender fluid. It also hints that we might see Lady Loki.

Sector: 1900-2099—The second number here will ring immediately familiar to Marvel fans. Marvel 2099 was a line of futuristic comics featuring famous Marvel characters. We’ve even seen Spider-Man 2099 in the post-credits sequence of Spider-Man: Into the Spider-Verse.

When we first properly meet Ravonna Renslayer, she’s judging Loki. She mentions that his sequence violation number is 7-20-89. This correlates to July 1989. Of course there’s an issue number that we think might be relevant to that: Thor #405. The Thor issue that was cover dated that month stars the Fantastic Four, the Negative Zone, and Mount Wundagore. All of those things are very relevant for the next MCU phase, WandaVision, and potentially Kang.

This is the soda we see Mobius drinking in his office. It’s a real discontinued soda that is classed as the first energy drink made by a major drinks company, Pepsi. It was in production from 1995 to 1999. This might seem random, but if it’s Mobius’ favorite drink then maybe it tells us something about the TVA manager and his preferred part of the timeline…

A Comic to Read 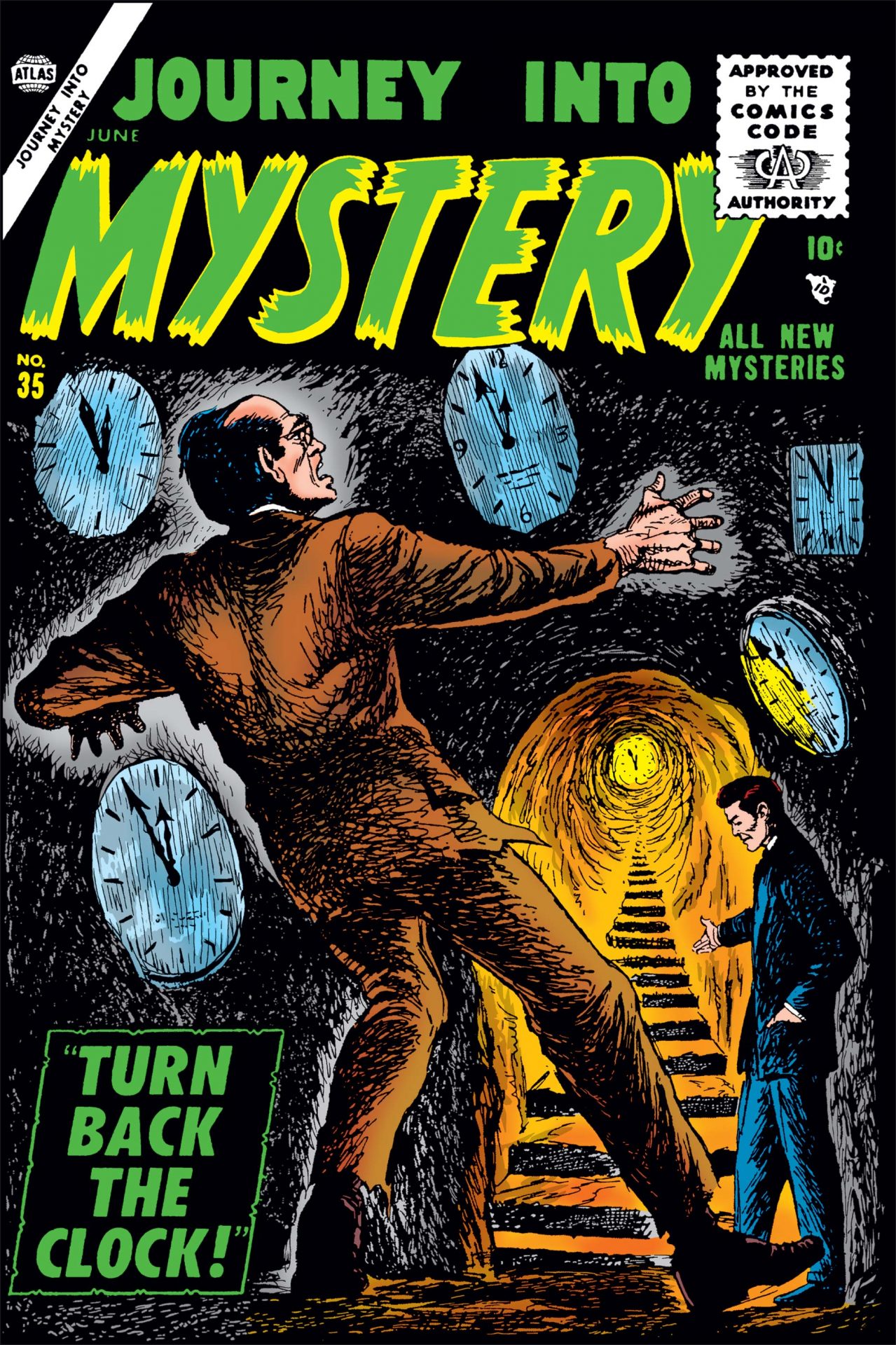 On Mobius’ little screen we see the number #35. So of course we thought of a comic. Journey into Mystery #35 (from the series that eventually turned into Thor) is an issue called “Turn Back the Clock” about a man transported through time!! RELEVANT!

Casey, the secretary of the TVA, has a drawer of impossible items. It’s a key moment in the first episode as it’s where Loki realizes the true power of the TVA. What inspires that revelation? It’s all the spare Infinity Stones, and it looks like everything apart from the Soul (or Mind?) Stone. They’re most probably variant gems from different timelines. And there’s a lot of Time Stones. There’s also a Honus Wagner baseball card, which is the most expensive baseball card of all time. 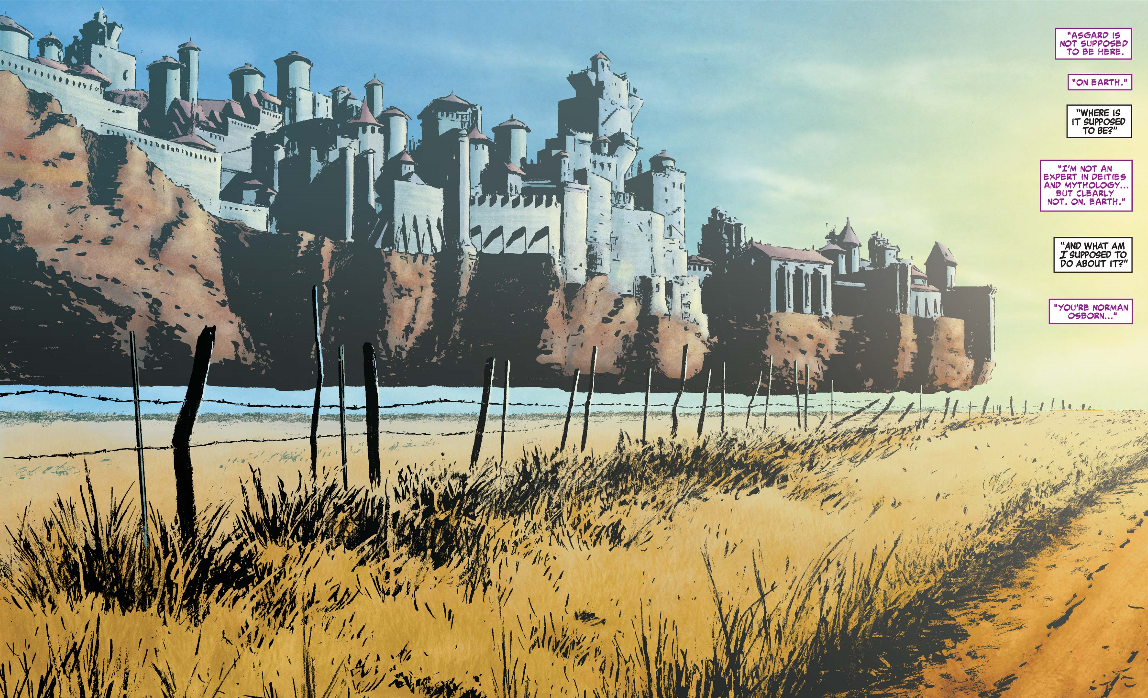 After the musical played a major part in HBO’s Watchmen, we visit the state here. This is actually very interesting in regards to Thor and Loki lore. Why? Well, when Ragnarok occurred during the ’00s Thor comics run, Asgard was reborn above Oklahoma. We should note that in the comics it’s above Broxton; here we’re in Salina, Oklahoma.

THE WEAPON THEY FIND IS FROM THE EARLY THIRD MILLENNIUM! This deserves to be in all caps. If you’ve been following along for Kang hints, then you know that this is important. In the comics, Kang the Conqueror, a.k.a. Nathaniel Richards, is from the year 3000. So this weapon being from that period is likely key to his potential arrival and Ravonna’s plans.

One of our favorite things to see is creators getting credited. So we’re continuing our tradition of highlighting the Special Thanks each week as well as suggesting comics/ characters/arcs we think they’re likely being thanked for.