The Mandalorian has gotten a lot deeper into Star Wars lore in its second season, but it hasn’t left the sheer glorious adventure of season one behind. It’s the closest thing since the original film in 1977 to capture that swashbuckling, genre-bending joy of such a space adventure. There were, conservatively 19 billion ripoff movies in the years between A New Hope and The Empire Strikes Back, including some delightfully cheesy entries. But TV didn’t slouch either, and the MVP was producer Glen A. Larson. In 1978, he created Battlestar Galactica, a true space opera with astounding effects. His 1979 follow-up, Buck Rogers in the 25th Century, hasn’t aged as well, but it captures the serial spirit much better.

Kino Lorber will release the 37-episode series on Blu-ray along with the theatrical cut of the pilot. So with only a couple of Mando episodes left, now’s the perfect time to check out the disco-dancing beefcake hero that is Buck Rogers.

The character of Buck Rogers actually dates back to 1928. He’s the creation of author Philip Francis Nowlan, and he first appeared in the novella Armageddon 2419 A.D. In each iteration, William (or sometimes Anthony) Rogers is a modern-day Earthman who through accidental suspended animation ends up 500 years in the future. The concept proved a particularly fruitful one and many imitators sprang up afterwards. The most famous of these is Flash Gordon, who debuted in 1934. 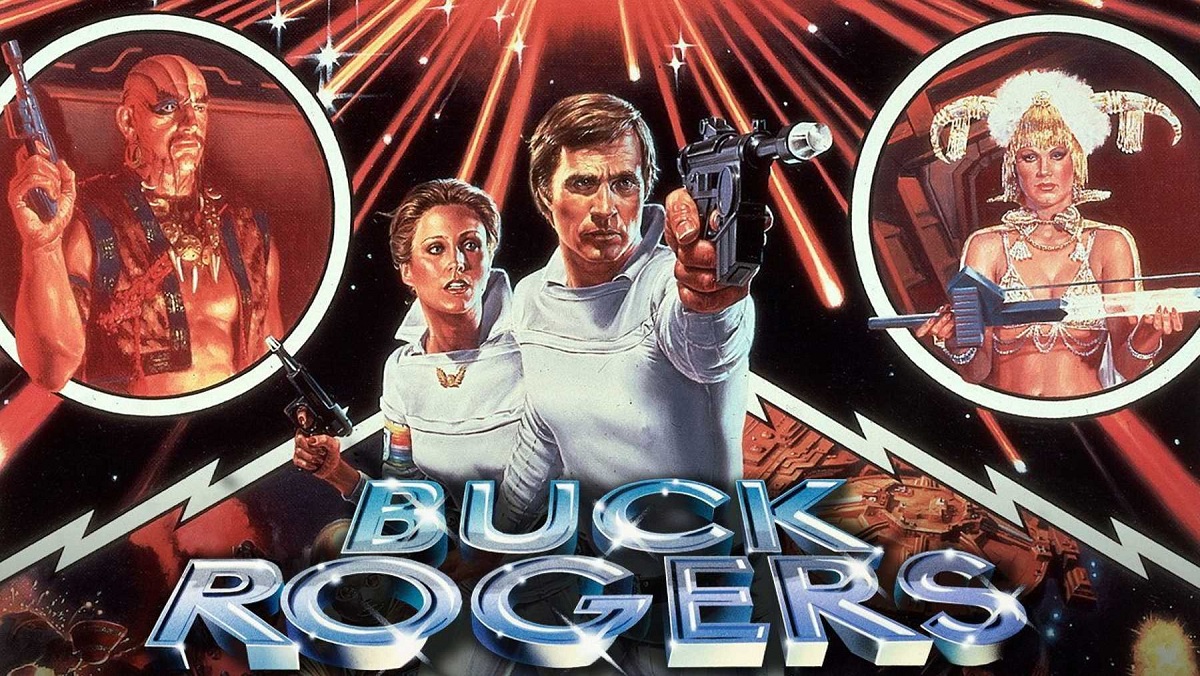 But, without Battlestar Galactica, we likely wouldn’t have gotten Buck Rogers. Larson was concurrently developing the two series at Universal; Rogers has veteran TV producer Leslie Stevens (The Outer Limits) as co-developer. The studio had success releasing the pilot movie of Galactica in cinemas overseas and in select cities in North America. They wanted the same for Buck Rogers, and the pilot film used several redressed sets and props from Galactica, which was still in series production. The designs for the ships for the later series used Ralph McQuarrie’s unused designs for the Vipers in BSG.

So there’s definitely something of a similar vibe to Buck Rogers in the 25th Century as Battlestar Galactica, but I think it ultimately works a bit better for Buck. Not least because there’s a chance to have some fun with concept and execution. 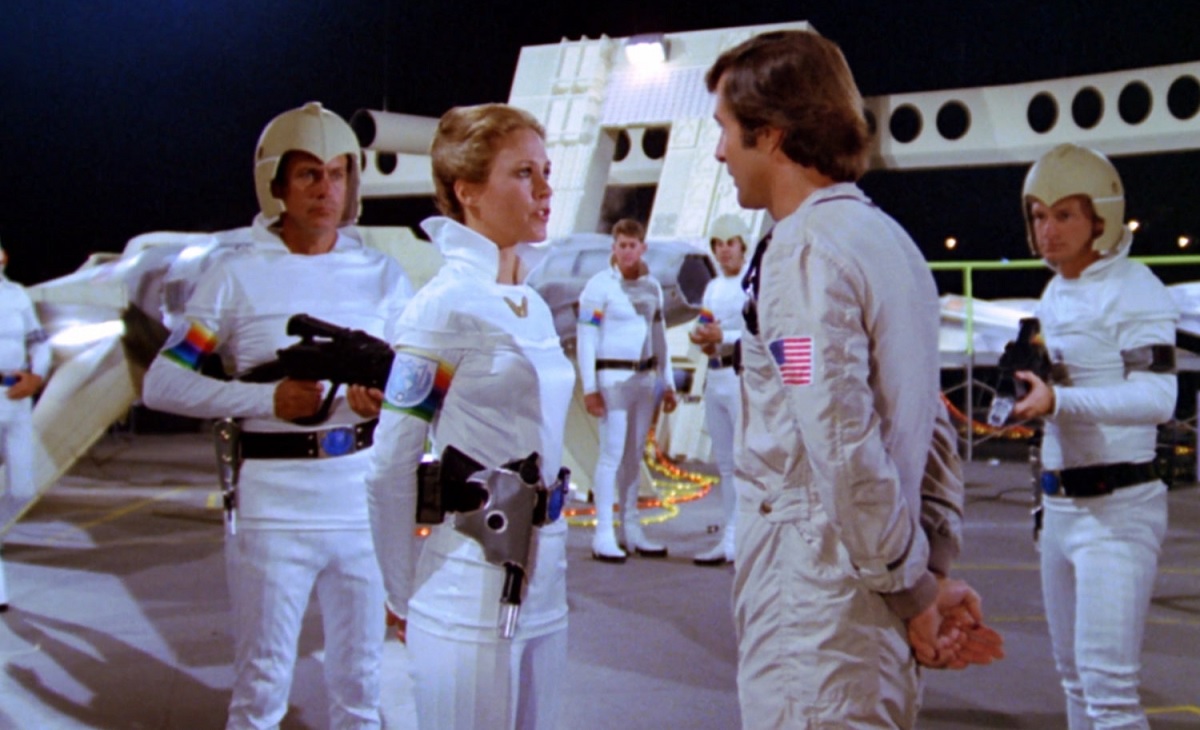 As the opening titles state, William “Buck” Rogers (Gil Gerard) is a NASA astronaut from 1987 on the last manned mission to deep space. Through a malfunction, Rogers ends up frozen for 504 years before members of the Draconian Empire, specifically the scantily clad Princess Ardala (Pamela Hensley), revive him. He’s obviously fairly disoriented and the Draconians, whose general Kane secretly plans to invade the Earth, send Buck off again with a tracking chip.

When he finally gets to Earth, he meets Colonel Wilma Deering (Erin Gray), who doesn’t trust him at all. He also meets the head of the Defense Directorate, Dr. Huer (Tim O’Connor) who gives the 20th Century Man a robotic servant named Twiki (voiced by Mel Blanc), and a hyper-intelligent computer called Dr. Theopolis (Eric Server). Twiki and Theo are like Flava Flav and his clock, if that helps you picture it. 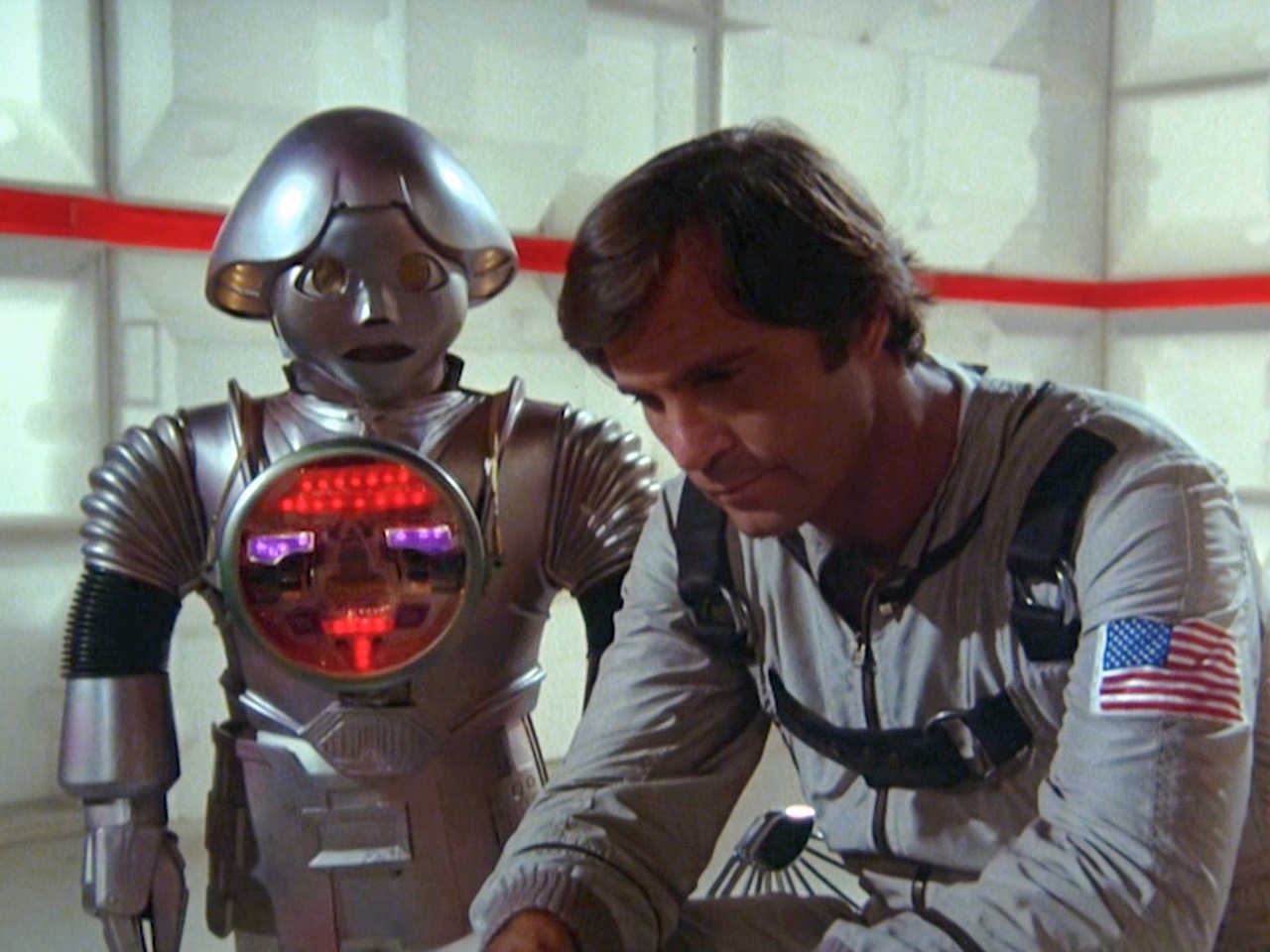 While Buck ultimately helps the Earth defense force fend off the Draconians, the pilot movie ends with him unsure if he’s really ready to sign up for full time military defense service. However, he does agree to help out when they need him. And, turns out, they need him a lot. Since he’s effectively a nobody in New Chicago (the new capitol of Earth), he can go undercover to infiltrate threats to the planet. He ends up becoming kind of like a future James Bond.

It’s in this way Buck Rogers in the 25th Century cements itself as a particularly effective space adventure. Each episode or two was a new mission with an overarching plot involving Draconia’s mission to overthrow the Earth in the background. Deering and Rogers have a strong working relationship but, of course, also have a constant will-they/won’t-they thing that kept audiences invested.

Watching it now, there’s definitely a vibe of Peter Quill to Buck Rogers. He’s a 20th Century Earth guy, a fish out of water who has natural charm and charisma that helps him get out of just about any jam. Unlike the prettyboy leads of BSG, Gil Gerard is a beefy, rugged screen hero and you can’t help but root for him. And, of course, there’s some tremendous late-‘7os sci-fi action all the way through. 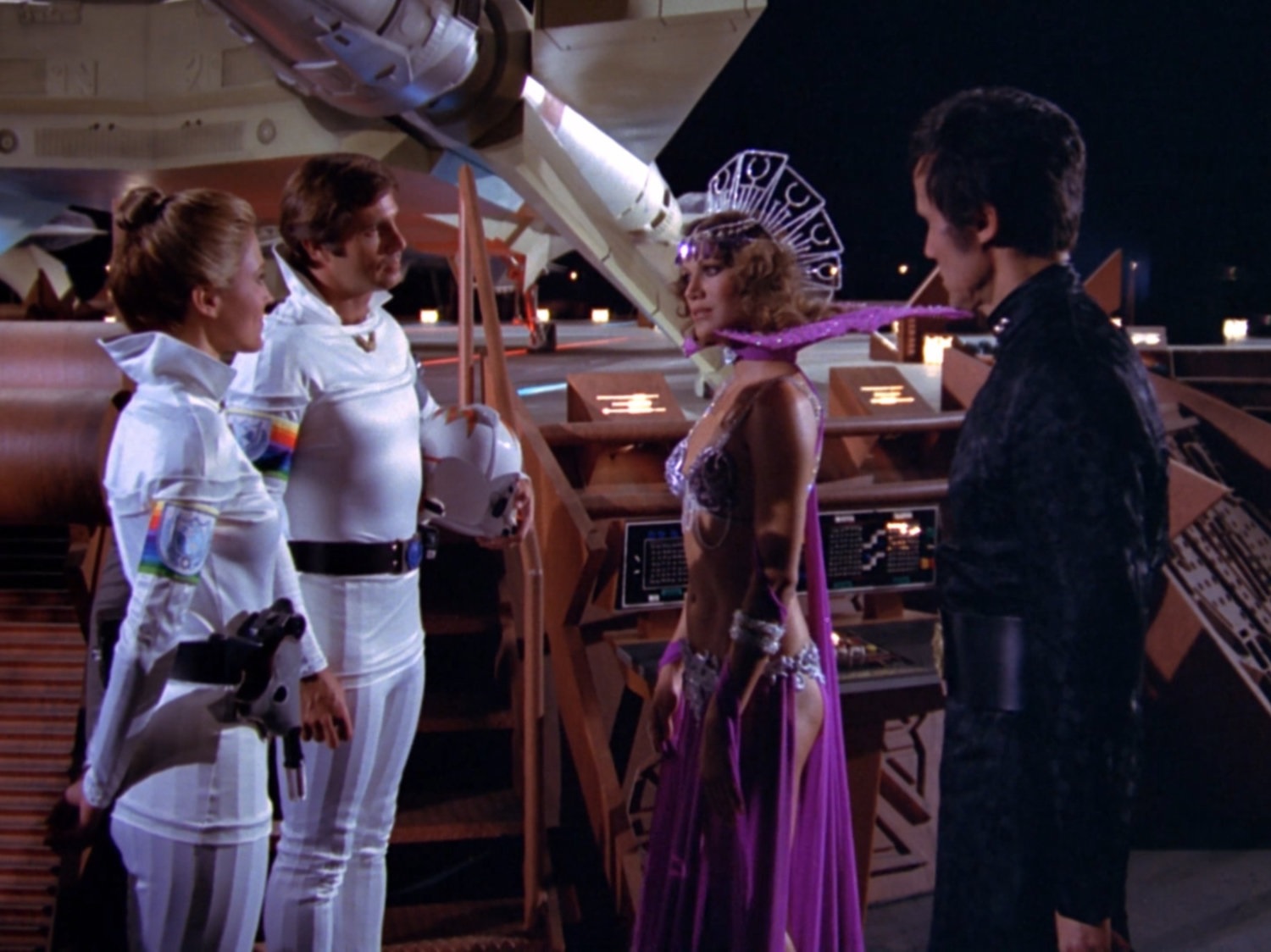 And like all of the best short-lived sci-fi shows, it seems, if it gets a second season, it’s completely different. Like The Outer Limits and Space: 1999 before it, a new group of producers took over between seasons and totally revamped Buck Rogers in the 25th Century. Buck, Wilma, and Twiki remained, but Dr. Theopolis and Dr. Huer were out. Also out was the central concept; instead of defending Earth from threats, Buck and Wilma were now on a ship called Searcher seeking out the five tribes of humanity that left Earth after the nuclear fallout. If this sounds a bit like Battlestar Galactica, it’s because that’s exactly what the new producers were doing. 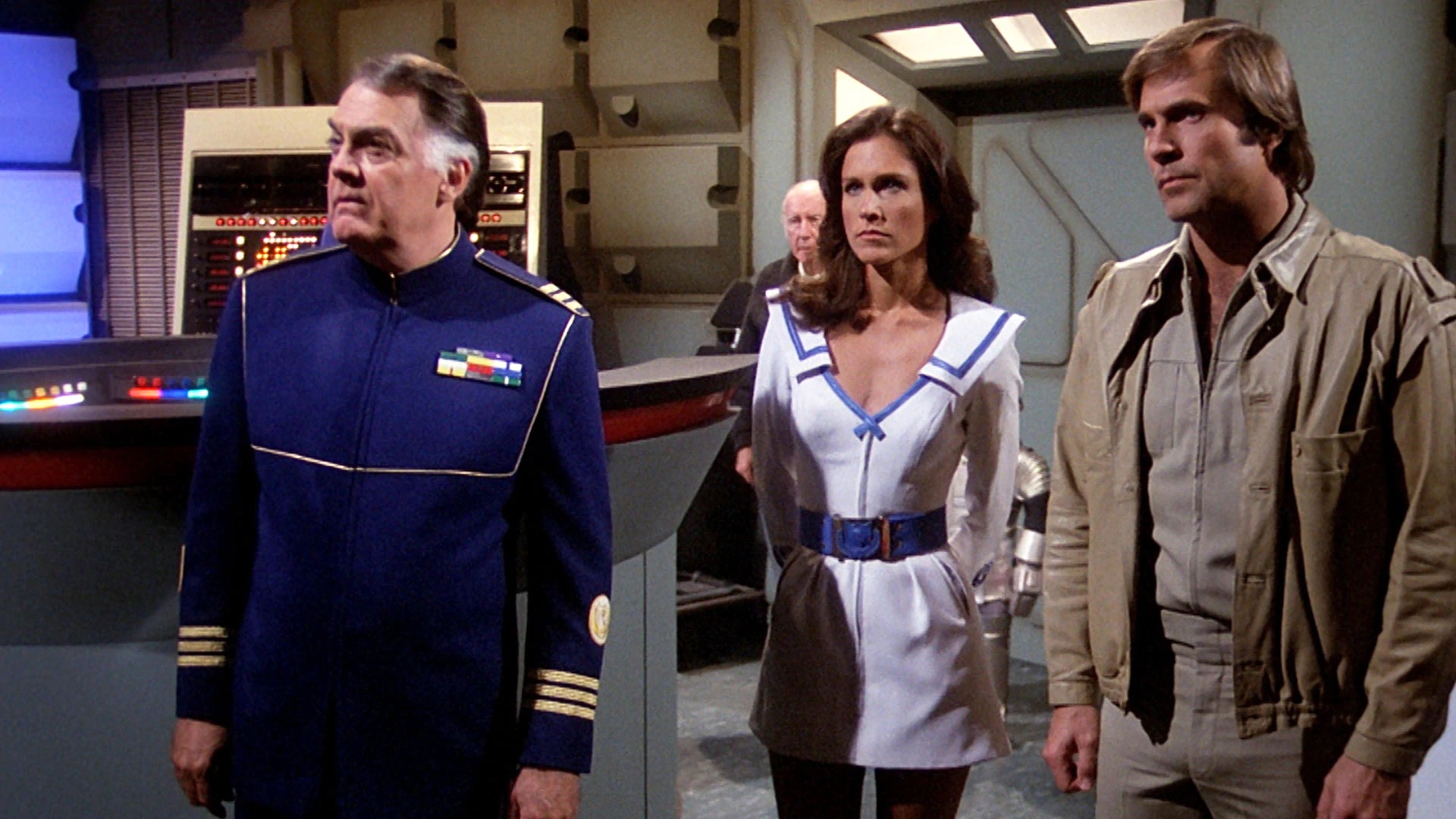 So while season two does have a character named Hawk who is a Bird Person (seriously, the Rick and Morty team based him on Hawk), it loses some of the uniqueness. It feels just kind of like any other Star Trek-esque space series. And perhaps most egregiously, it made the character of Wilma Deering (a COLONEL let us not forget) into much more of a damsel. They even put her in miniskirts instead of the jumpsuit from season one. It may as well be a different character. It only lasted 13 episodes in its new format before sadly meeting cancelation.

While delightfully dated (Buck disco dances in the first episode), it also scratches a very particular sci-fi itch with me. The Mandalorian and its adventure-serial structure also scratches it. So if you need more spaceships zoom-zoom and laser guns pew-pew, I’d definitely recommend Buck Rogers in the 25th Century.

Kino Lorber has released the whole series plus the two-hour pilot movie in a complete Blu-ray collection.