SPACE: 1999 Bridged the Gap from TREK to WARS - Nerdist

SPACE: 1999 Bridged the Gap from TREK to WARS

For every bit of modern science fiction one can credit to the influence of Gene Roddenberry or George Lucas, equal credit has to go to Gerry and Sylvia Anderson. The husband-and-wife producing team gave television sci-fi some of the most interesting and complex stories of all time. They don’t get the credit they deserve because most of their great works involved puppets. The apex of their partnership, however, had a cast of hundreds and sets and special effects rivaling anything Star Trek ever produced. That series is the short-lived but wholly fascinating Space: 1999.

British Gerry and Sylvia Anderson pioneered the “Supermarionation” technique, a gimmick of marionette performance that mixed in elaborate and quite large miniature sets and model work. Their shows were staples of British (and later American) TV in the ’60s. Supercar, Fireball XL5, and Stingray were hits for commercial network ITV; the Andersons’ biggest hit was Thunderbirds, a series about a family of vigilante pilots and astronauts who rescue victims of various disasters. This show was massive for a series using puppets and miniatures and became an icon. This led to more puppet shows, of which Captain Scarlet and the Mysterons is my personal favorite. 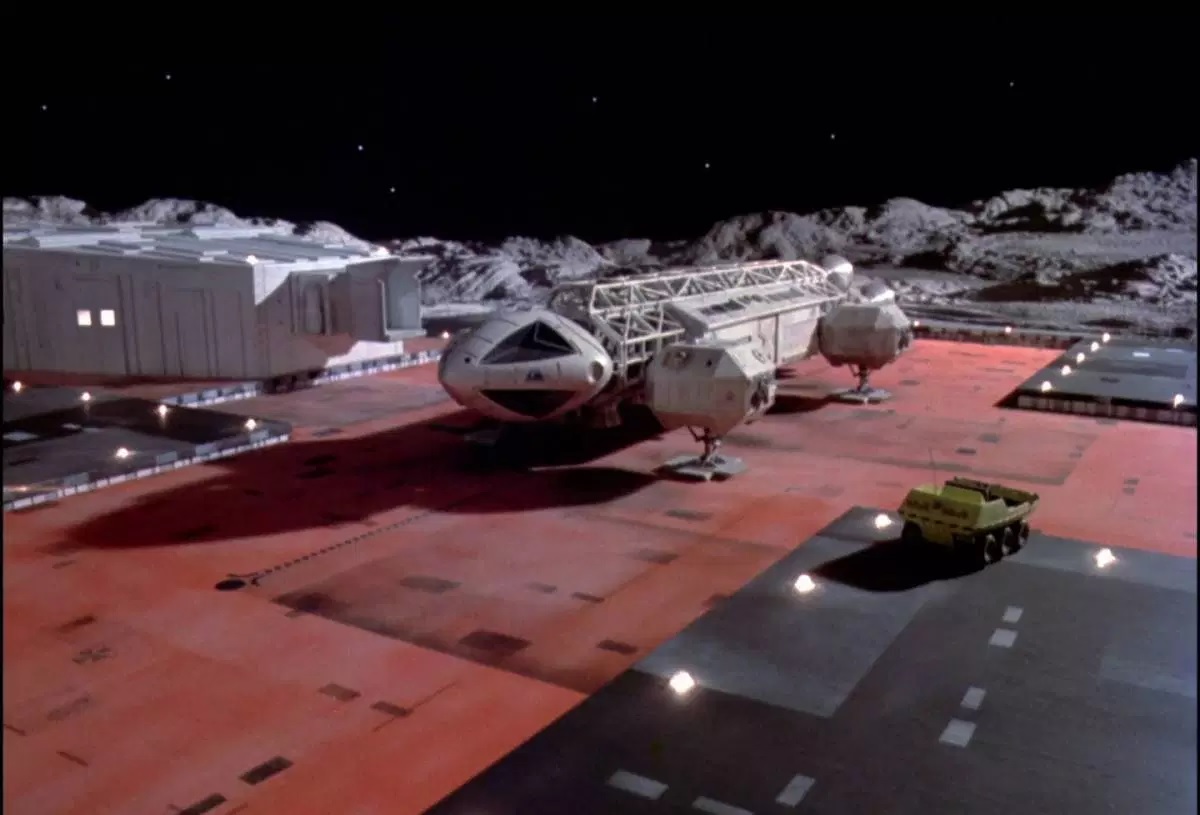 But after a few more puppet series, Gerry Anderson wanted to branch out into live-action. His first fully live-action series was 1971’s UFO, which for all the world could have been another Supermarionation show, just with human actors instead of puppets.

Finally, in 1975, Gerry and Sylvia got to make Space: 1999, the most expensive series ever on television to that point. The British-Italian co-production got big American stars Martin Landau and Barbara Bain and their idea was a series that mixed Star Trek with more ethereal storytelling, not unlike 2001: A Space Odyssey. It’s a remarkable if dated vision of the future (our old future, anyway), but it’s a series very much of two halves. 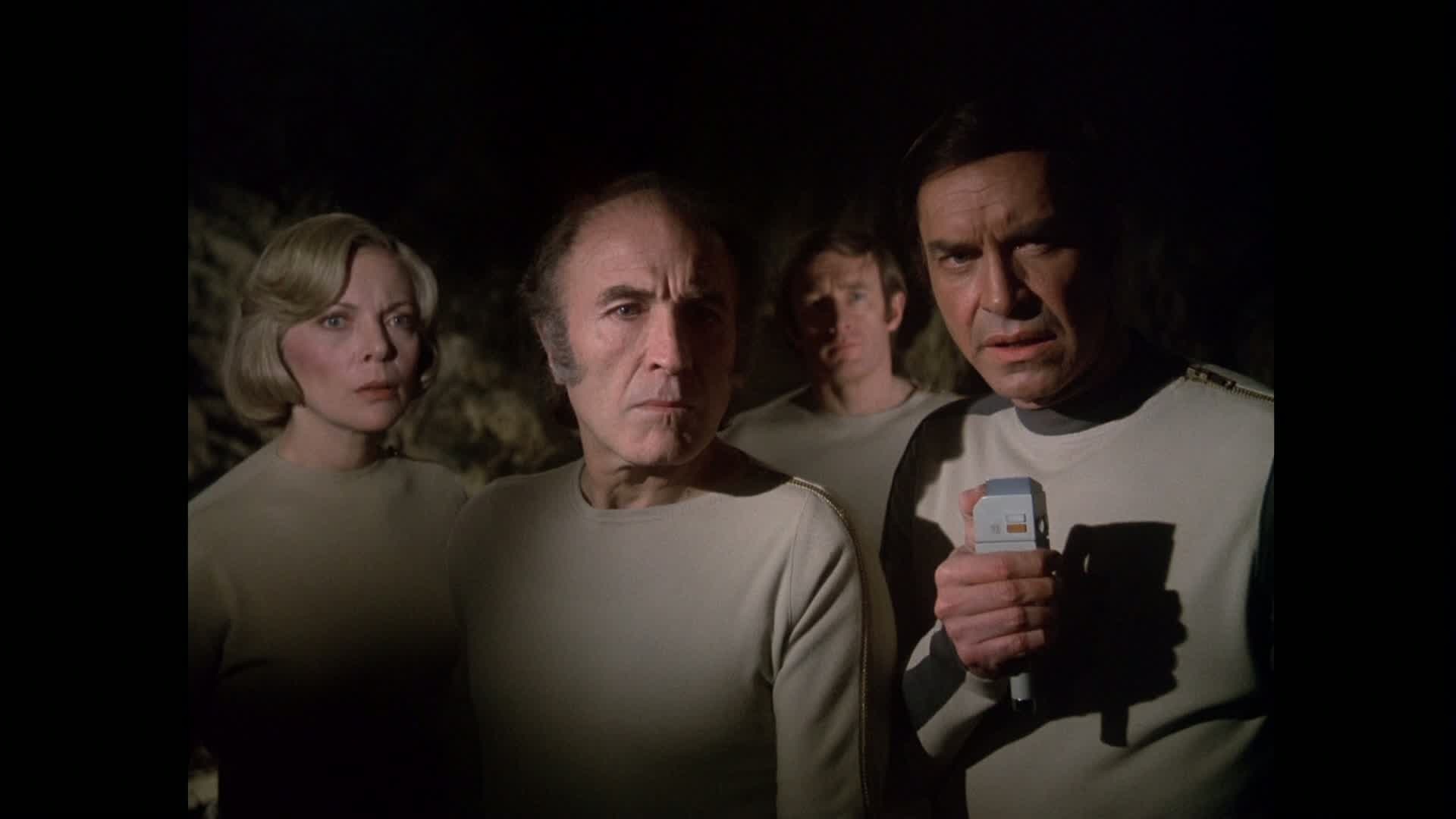 Year One set up the predicament. In 1999, a base on the moon–Moonbase Alpha–has a changeover of power. The former commander is replaced with Commander John Koenig (Landau), a decorated officer who nevertheless needs a win. The moonbase has around 300 crew members and one of their tasks is to dispose of nuclear waste from Earth. In the first episode, an accident occurs and the nuclear waste explodes, causing the entire moon to breakaway from Earth’s gravity and careen through space, farther and farther away from home. The people on the moonbase, the “Alphans,” then have to try to stay alive and somehow get back home. As the moon speeds through space, with only small mission ships called Eagles for reconnaissance, the Alphans run across all forms of sentient and non-sentient lifeforms and phenomena.

Some of the first season’s best episodes deal directly with strange occurrences and how they affect the crew. The episodes “Collision Course” and “Black Sun,” for example, each deal with the moon heading for certain doom, unable to control their course in the least. “Black Sun” is specifically interesting because it has the moon fly through a dark star, which zaps the base’s energy and sets the crew up to freeze to death. It’s a slow episode, but one that speaks to the dangers of space and how humanity deals with certain doom. 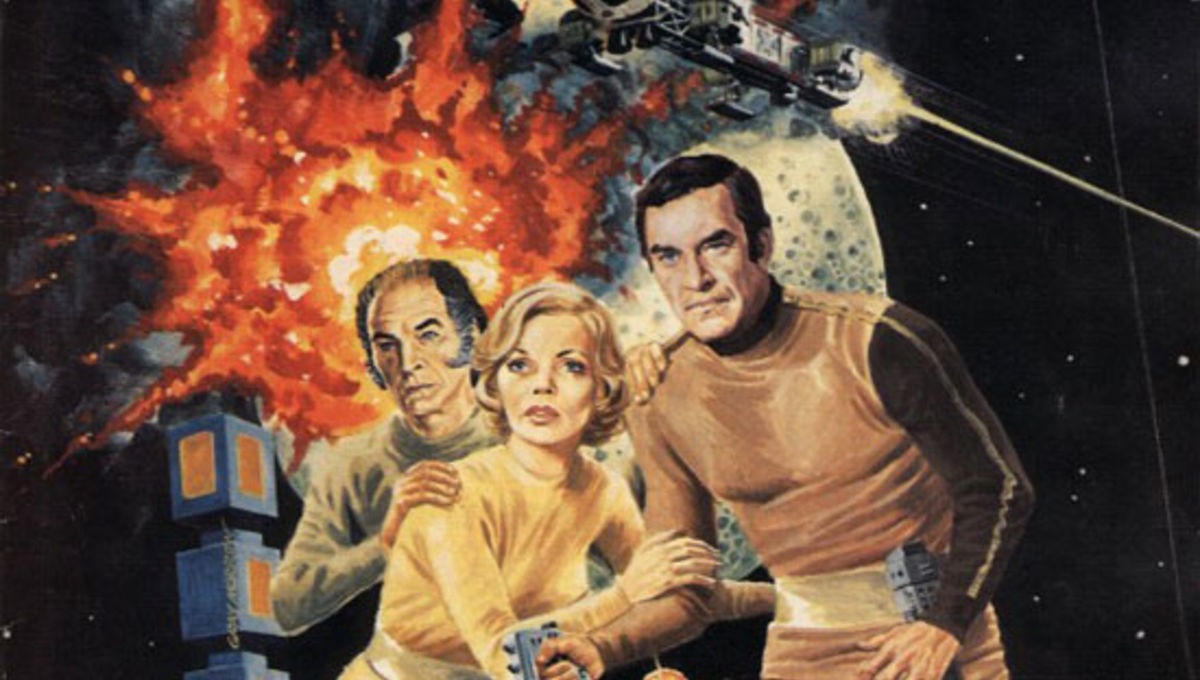 Other standout episodes of season one feature run-ins with strange alien creatures and races. “Force of Life” sees nuclear technician Zoref (a very young Ian McShane in a guest role) invaded by an alien entity that sucks up vast amounts of energy, causing him to become a kind of energy vampire. “War Games” finds the Alphans attacked by a society from a planet that sees the moon as an invading virus with no right to exist. The series’ best episode, “Dragon’s Domain,” finds a hero pilot (Italian guest actor Gianni Garko) again facing nightmares of a hostile alien that killed all the members of his crew years ago. No one believed him at the time, but now he has a chance to get revenge…or destroy Moonbase Alpha trying.

With the budget it had–for special effects, costumes, and sets–Space: 1999 also had a roster of impressive guest actors. In addition to McShane and Garko, season one also featured Christopher Lee, Peter Cushing, Richard Johnson, Catherine Schell, Julian Glover, Leo McKern, and Joan Collins. Season One is a fascinating and thoroughly enjoyable 24 episodes.

The trouble is, the show was too expensive, and it was cancelled. For a bit, anyway. Eventually, ITV head (and huge Gerry Anderson fan) Lew Grade gave the show a last minute stay of execution, but some changes had to happen. In the interim, Gerry and Sylvia Anderson’s marriage and producing partnership dissolved; Gerry alone would produce Year Two, along with a new showrunner, American producer Fred Freiberger. Freiberger is infamous in sci-fi TV circles; he’s the producer brought in to “save” Star Trek for its third, final, and silliest season. 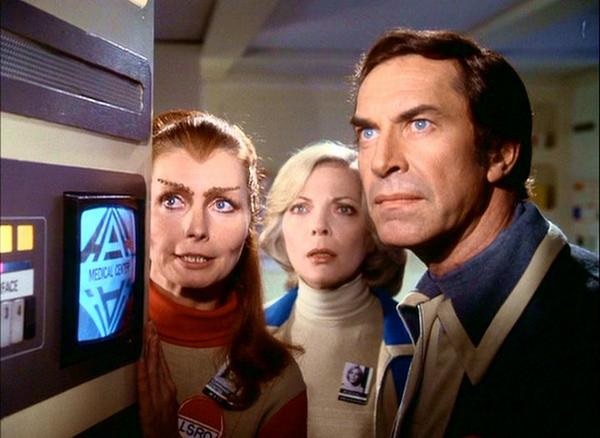 Freiberger’s changes for season two of Space: 1999 were drastic. The original set was deemed too large and difficult to light, so a completely different bridge set was built. All of season one’s costumes from award-winning designer Rudi Gernreich were gone, replaced with much more generic jackets and uniforms. The show’s storylines became much less ethereal and much more action and alien-monster based. Most outward of the changes came in the cast.

Landau and Bain both remained (though they did not care for the scripts this time out), but third lead Barry Morse was gone, along with Hancock and Jones. Tate and Merton remained in a lesser capacity, while Tony Anholt joined and the show’s new action-man hero, Tony Verdeschi, and season one guest star Schell joined as Maya, an alien shape-shifter who joins the crew in the season two premiere. Schell’s performance is easily the best thing about season two, even if her character’s ability to turn into things is fairly silly, ranging from animals like tigers and hawks to humanoid aliens to even a guy in a bushido outfit with a kendo stick.

It’s reductive to say “all of season one is good and all of season two is bad,” which is certainly not the case. Year Two is not without its charms and there are a few standout episodes, including the two-part epic “The Bringers of Wonder,” in which it seems Earth’s forces have finally reached Moonbase Alpha, but Koenig believes the friends are actually monsters. There are also good episodes from Doctor Who writers Terrance Dicks and Pip & Jane Baker and a couple of others from bigger name directors like Val Guest and Peter Medak. And season two still benefited from the influence of season one’s most prolific writer, Johnny Byrne, though Freiberger’s sensibilities did not necessarily gel with Byrne’s. 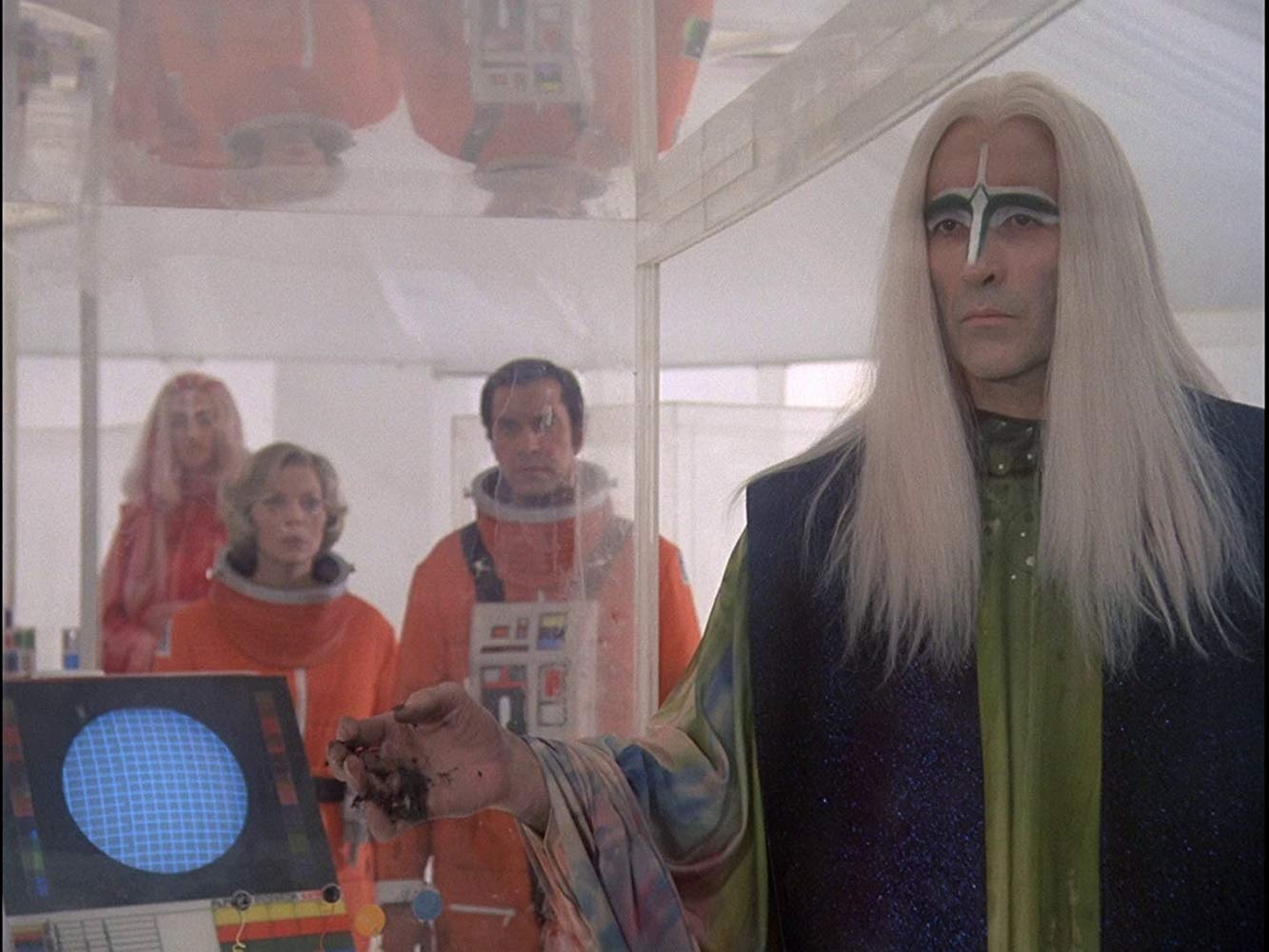 Ultimately, it sort of depends on what kind of science fiction show you’re looking for. Season one is a trippy, thoughtful, character-driven sci-fi series, while season two is much more full of action and monster-of-the-week zaniness. But in an age that was nearly a decade away from Star Trek, science fiction was about to see a major change. All of Space: 1999 save the final five episodes aired in a pre-Star Wars world. Perhaps in this way, with season two’s greater emphasis on fantastical and monstrous alien threats, Freiberger had his finger on the pulse of space opera to come. Even Star Trek: The Motion Picture feels more akin to some of Space: 1999 in look and tone than it does to Star Trek: The Original Series.

For my money, though, season one is really where the show stood head and shoulders above other sci-fi, of the time or since. 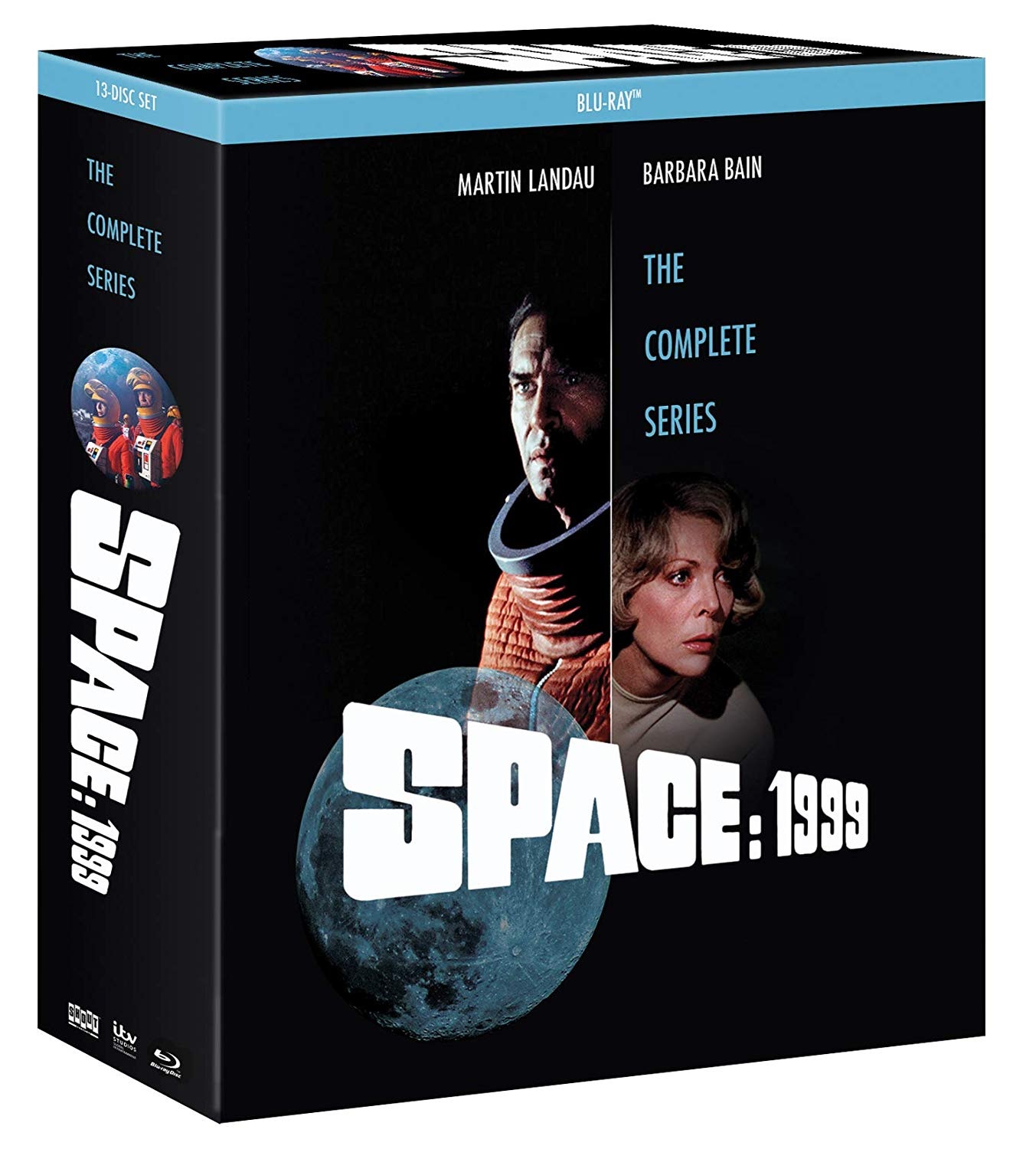 Shout! Factory is releasing a gorgeous full series box set on Blu-ray on July 16, with all 48 episodes on 12 discs, plus a 13th disc of extras. It’s lovely to see the show look so good; it’s at once very dated and cutting edge. Highly recommended for fans of sci-fi/space opera of any kind.

If you’d like to watch the first episode, you can do so from Shout! Factory’s YouTube here: