Star Wars is a big, huge, massive blockbuster franchise now, and people have had 41 years with it in their lives. It’s sort of a thing that for most of us now just feels like it’s always been there. But there’s no overstating just how gargantuan a sea change Star Wars was. Before there was any thought of a franchise, it was just an awesome space adventure movie with amazing special effects. Who wouldn’t want to try to replicate that? Nobody, turns out. Nobody wouldn’t. NBC and Universal were the first out the gate with the TV series Battlestar Galactica, which turns 40 this month.

From Glen A. Larson, a veteran TV writer and producer of some ’70s cop shows—and, by the way, who’d go on to create other sci-fi TV shows like Buck Rogers in the 25th Century, Knight Rider, and Manimal—came a series that hoped upon hope could capture some of that Star Wars juice, but which also included some truly out-there ideas of its own. Wanting to do something truly impressive, Larson teamed up with The Outer Limits creator Leslie Stevens and John Dykstra of Star Wars‘ Oscar-winning special effects team and they were off and running. The three-hour pilot movie, dubbed “Saga of a Star World,” was an event and, a mere 15 months after the release of Star Wars, was one of the first such projects to come out. 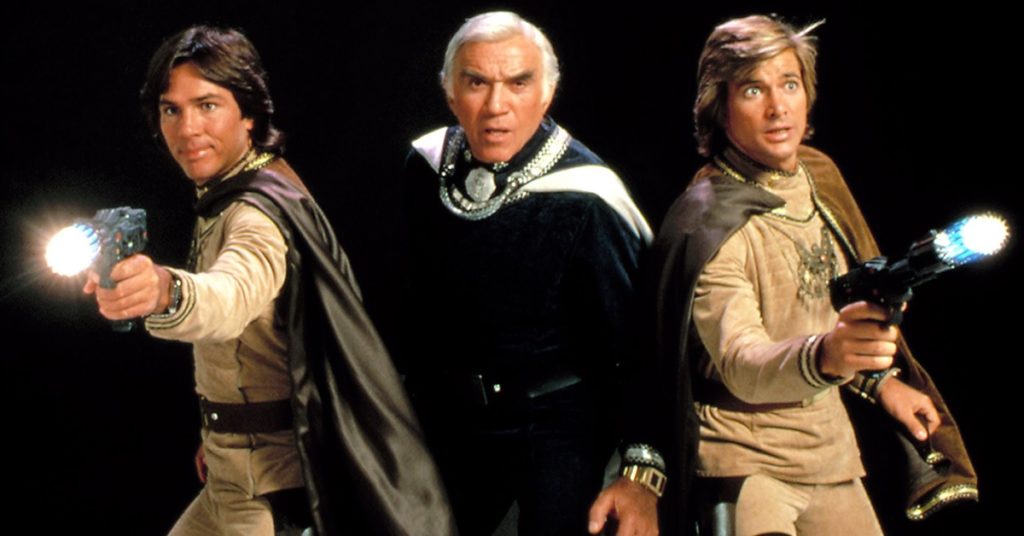 “Saga of a Star World” has several different versions, not least because (since it proved so incredibly expensive, with some reports of its cost being $14 million—$3 million more than Star Wars) Universal decided to put it out in various non-American territories in the world as a feature film in order to recoup some of the production budget. And in a lot of ways, this two-hour cut works quite well as a movie in its own right, starting very strong and ending very strong, with only a few narrative threads left dangling. But hey, Darth Vader was left hurling into space, so it’s not that weird.

Larson wrote the film himself and came up with the overall premise. A member of the Church of Latter Day Saints, Larson wove a fair amount of Mormon mythology and scripture into the story. This was talked about quite a bit when the series was rebooted in 2003 by Ronald D. Moore. That later series functions much more like a traditional space opera, with the day-to-day trials and tribulations of the last surviving humans providing most of the drama. This sort of happened in the ’78 version, too, except it also had to be a rip-roaring, often funny romantic space fantasy. There’s truly a lot going on. 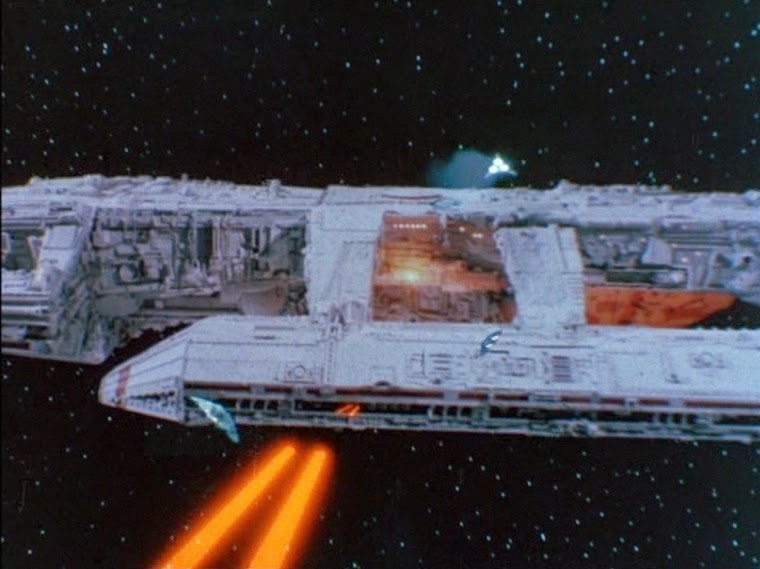 There are Twelve Colonies of humankind, and a fleet of battlestars and fighters that patrol these planets. The ancient robot race called the Cylons have been the enemies of humans for eons, and the film opens with an armistice about to take place. Only Commander Adama (Lorne Greene) sees the danger inherent in trusting the Cylons. While the humans get ready for this historic treaty, the final fighter patrol heads out, consisting of Captain Apollo (Richard Hatch) and his younger brother Lieutenant Zac (Rick Springfield—yes, of “Jessie’s Girl” fame), both of whom happen to be Adama’s kids. Long story short, the Cylons attack and Zac is killed, along with 90% of all of humanity. Various ships of different classes, including the titular Galactica, make up the fleet that seeks to travel far away to the rumored thirteenth colony: EARTH. Yeah, you know the premise if you know the later show. 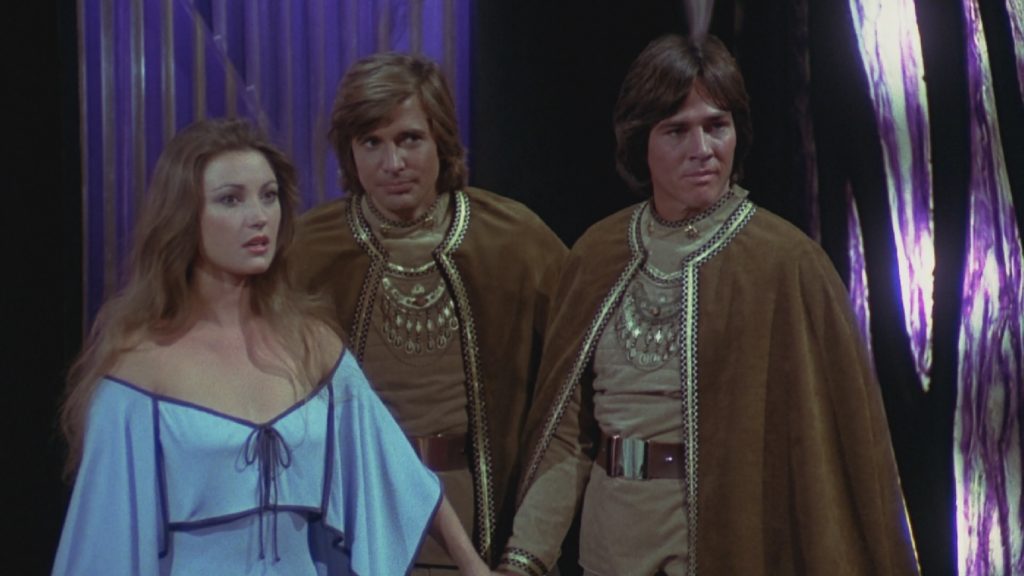 If you’ve only seen the reboot, there’s lots in here you’ll recognize, beyond character names and basic concept. Even in the movie cut of the pilot, it deals with the predicament of where the refugees are going to go while on their journey, since there’s far less room in actual quarters than there are people who need them. Apollo and his two wingmen, Starbuck (Dirk Benedict) and Boomer (Herbert Jefferson Jr.), see firsthand just how bad the sick and wounded have it, going days without food and water. This plays into the greater sense of class warfare at work, since the larger luxury cruisers only house those who were wealthy and decadent, personified by the film’s ostensible human villain, Sire Urie (Ray Milland).

The stuff that doesn’t quite line up feels especially goofy by today’s standards. The space battles have excellent effects for the time, naturally in keeping with the caliber of the team employed, but the composite shots of the pilots look very cheesy. The flight helmets do effectively nothing, and the head-on shots of the cockpit are done in front of an immobile star field, making it feel a bit like someone shot it in their garage. So it’s this constant give and take; the space effects and scenes shot on the Galactica looks cinematic, while many of the other locations and cockpit shots do not. 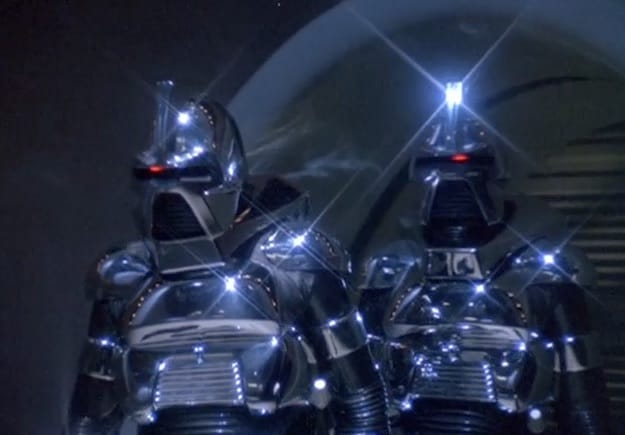 But what has aged the worst has to be the sense of humor, and the aim toward little kids. Star Wars, while beloved by children, didn’t feature any little kids until 1999, and perhaps the thinking behind Battlestar Galactica is that since the plot is a little more adult, they should probably have an annoying little kid to, I dunno, even it out. This little kid is Boxey (Noah Hathaway), the son of the refugee leader Serina (Jane Seymour). Apollo strikes up a friendship and then a romantic relationship with Serina, and wins her heart by cheering Boxey up with a brand new pet: a robotic “dagget” (or space dog) named Muffit. Muffit was played by a chimpanzee in what looks like a very restrictive costume. Oh my stars. Boxey spends most of his screentime running after Muffit and shouting. Honestly, why would anyone name their child Boxey? 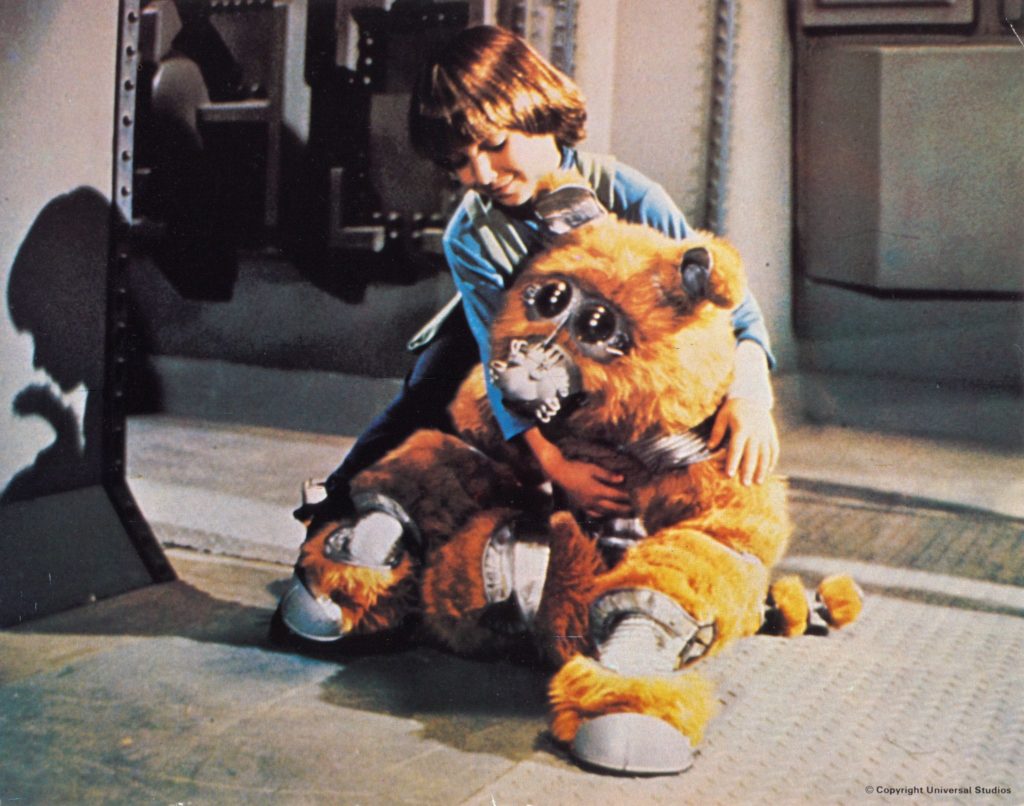 There’s also some humor that really hasn’t aged very well. Starbuck in this series is the happy-go-lucky wisecracking womanizer, and though Benedict is very likable, the character spends most of the time trying to keep Apollo’s sister Athena (Maren Jensen) from finding out about his new girlfriend, the “socialator” Cassiopeia (Laurette Spang). Also, there’s this weird pleasure planet the colonists all visit and there’s a trio of disco-performing singers with multiple faces and voices that Starbuck wants to represent…amid his entire species on the brink of extinction. It’s very weird. 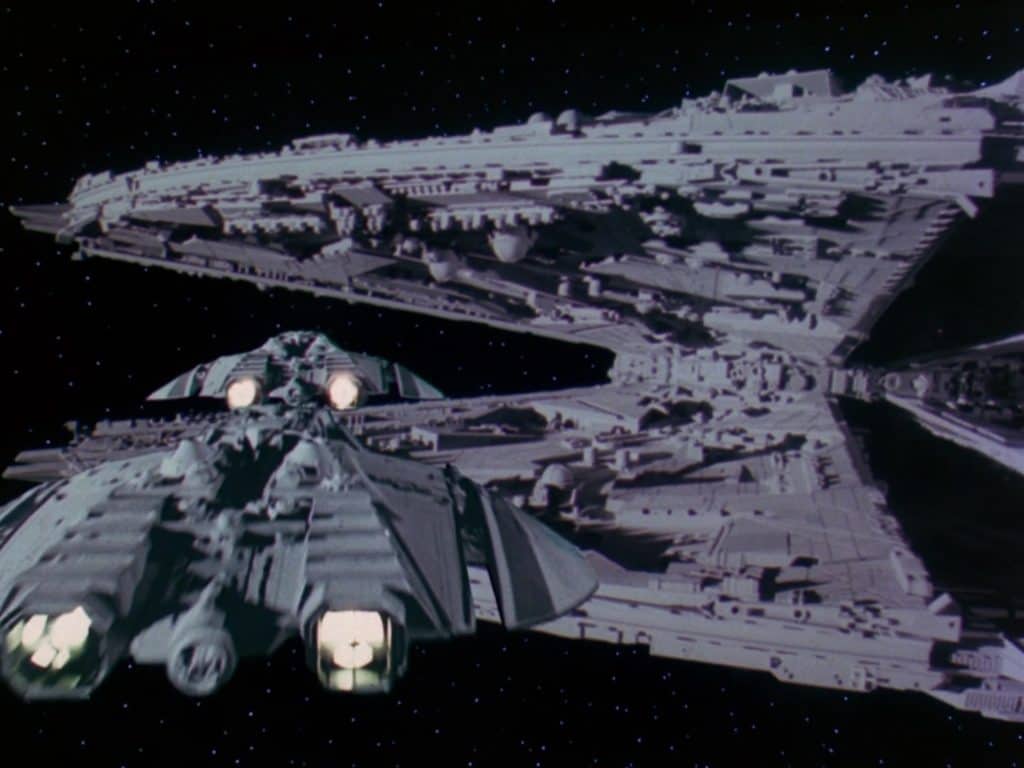 That said, and cheesiness firmly understood, I still think Battlestar Galactica—or at least the pilot movie—stands as a nice piece of post-Star Wars space adventure. There’s plenty of action, the heroes are handsome at heroing, and it differentiates itself enough from the George Lucas movie by bringing in elements of Ancient Egypt, Greece, and Mayan history to suggest a greater expanse of humanity in the cosmos. 20th Century Fox evidently didn’t think it was different enough and sued Universal for copyright infringement. They later settled out of court, and there’s definitely no question Battlestar wouldn’t have come about without Star Wars, but I still think there’s room for both in the space opera starscape.