If you’ve fallen for The Witcher in any form, you can thank author Andrzej Sapkowski. He created Geralt of Rivia, the Continent, and everything else in that beloved fantasy series. The Witcher books have made the jump to video games and more recently to Netflix as a television show starring Henry Cavill. And now we get to enter the world of another Sapkowski-penned series, a historical fantasy trilogy that begins with The Tower of Fools. Released in Polish in 2002, David French’s English translation of the book is finally arriving in October of this year. Nerdist has an exclusive excerpt to take you into this rich world rooted in the past.

The Tower of Fools unfolds during the 15th century, specifically during the Hussite Wars. Some locations and characters come right from history, but many fantastical elements extend the story beyond the world we know. Reinmar of Bielawa, a doctor and a magician also sometimes known as Reynevan, flees his home after nobles catch him in an act of indiscretion. He leaves the city only to discover strange forces are at work. Shadows are darkening. A Holy Inquisition spurs those pursuing Reinmar. On the run, the doctor finds himself in Narrenturm, the Tower of Fools. In other words, an asylum. And then it comes down to the matter of escape. 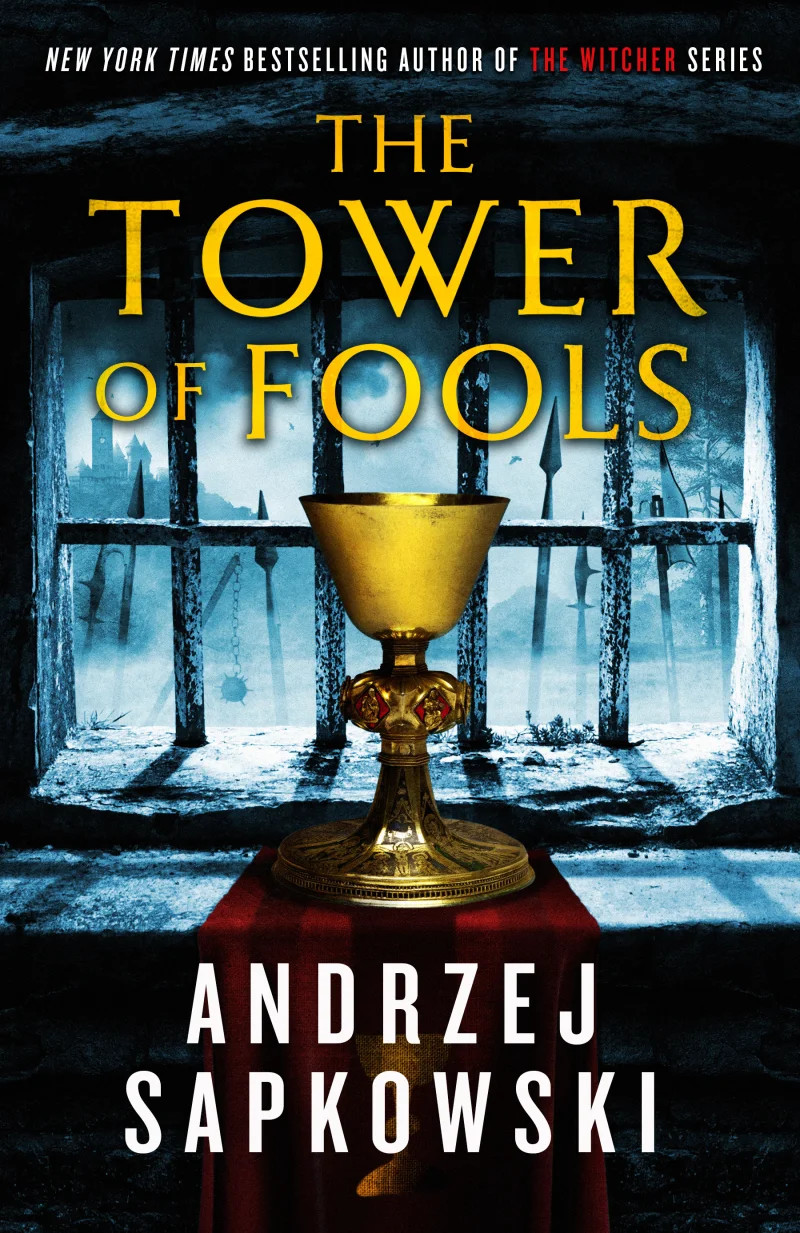 The below excerpt from chapter three of The Tower of Fools catches up with Reinmar/Reynevan when he is in a spot of trouble. I have a hunch this is just a taste of what Reinmar will have to reckon with in his travels.

Henryk Krompusz reined in his horse abruptly and turned, trying to determine which bush had just quietly called him by his nickname.

‘Who’s there? Show yourself!’ The bushes rustled.

‘No, it’s Saint Jadwiga.’ replied Reynevan in a voice as sour as   a gooseberry in May. ‘Ciołek, I need help . . . Whose retinue is it? Kantner’s?’

Before Krompusz worked out what was happening, two other Oleśnica knights had joined him.

‘Reynevan!’ groaned Jaksa of Wiszna. ‘Christ Almighty, what do you look like!’

I wonder how you’d look, thought Reynevan, if your horse had given up the ghost just outside Bystre. If you’d had to wander all night through the bogs and wildernesses by the River Świerzna, and just before dawn exchange your wet, muddy rags for a smock swiped from the fence of a peasant’s cottage. I wonder how you’d look after something like that, you foppish dandy.

Benno Ebersbach, the third Oleśnica knight to ride up, was probably thinking the same thing.

‘Instead of gawping,’ he said dryly, ‘give him some raiment. Off with those rags, Bielawa. Come on, gentlemen, take whatever you have from your saddlebags.’

‘Reynevan,’ said Krompusz, still unable to believe what he was seeing. ‘Is it truly you?’

Reynevan didn’t reply. He put on a shirt and jerkin one of them threw him. He was so angry, he was close to tears.

‘We see that,’ Ebersbach confirmed with a nod, ‘and also concur that your need is great. Great indeed. Come on. We must present you to Haugwitz. And the duke.’

‘Everybody knows. Everybody’s talking about it.’

If Konrad Kantner, with his oval face made longer by a deeply re- ceding hairline, his black beard and the piercing eyes of a monk, did not overly resemble a typical member of the dynasty, his daughter Agnieszka was a veritable chip off the Silesian–Mazovian block. The princess had the flaxen hair, bright eyes and small, blithe retro- ussé nose of a Piast, immortalised by the now famous sculpture in Naumburg Cathedral. Agnieszka, Reynevan quickly calculated, was around fifteen, so must already be promised in marriage. Reynevan couldn’t recall the rumours as to whom.

‘Know,’ said the duke, fixing him with forbidding eyes, ‘that I do not approve of your deed. In fact, I consider it ignoble, repre- hensible and opprobrious, and frankly advise remorse and penance, Reinmar of Bielawa. My chaplain assures me that there is a special enclave for adulterers in Hell. The devils sorely vex the miscreants’ instruments of sin. I shall forego the details owing to the presence of the maid.’

‘How you will make amends to Gelfrad of Stercza is a matter for you and him,’ continued Kantner. ‘It is not for me to interfere in this issue, particularly since you are both vassals of Duke Jan of Ziębice. I ought to simply wash my hands of the matter and send you to Ziębice.’

‘But,’ continued the duke after a moment of dramatic silence, ‘out of respect for your father, who laid down his life at Tannenberg at my brother’s side, I shall not allow you to be murdered as part of a foolish family feud. It is high time we put an end to such feuds and live as befits Europeans. You may journey with my entourage all the way to Wrocław. But stay out of my gaze, for the sight of you does not please me.’

The hunt was definitely over. The falcons were hooded, the mal- lards and herons they had caught already hanging from the bars of the wagon. The duke was content, his entourage, too, because the potentially interminable hunt had been brief. Reynevan noticed several clearly grateful glances – the rumour had already spread through the retinue that the duke had curtailed the hunt and re- sumed the journey because of him. That probably wasn’t the only rumour doing the rounds, and his ears burned as though all eyes were on him.

‘Everyone,’ grunted Benno Ebersbach, who was riding alongside him, ‘knows everything . . .’

‘Everyone, yes,’ confirmed Henryk Krompusz, quite sadly. ‘But, fortunately for you, not everything.’

‘Are you playing the fool, Bielawa?’ asked  Ebersbach,  with- out raising his voice. ‘Kantner would certainly drive you away, and perhaps also send you in chains to the castellan, if he knew somebody had dropped dead in Oleśnica. Yes, yes, don’t  goggle  at me. Young Nicolaus of Stercza is dead. Cuckolding Gelfrad is one thing, but the Sterczas won’t ever forgive you for killing their brother.’

‘I never . . .’ Reynevan said after a series of deep breaths, ‘I never laid a finger on Nicolaus, I swear.’

Ebersbach was clearly unimpressed by Reynevan’s oath. ‘And to complete the set, the lovely Adèle has accused you of witchcraft, saying you bewitched and took advantage of her.’

‘Even if she did,’ replied Reynevan after a  short  pause, ‘she was compelled to. On pain of death. She is in their grasp, after all—’

‘No, she isn’t,’ countered Ebersbach. ‘The lovely Adèle fled from the Augustinian priory, where she publicly accused you of devilish practices, to Ligota and the safety of the Cistercian nuns’ convent.’ Reynevan sighed with relief. ‘I don’t believe those accusations,’

he repeated. ‘She loves me. And I love her.’ ‘Beautiful.’

‘If you only knew how beautiful.’

‘That’s as may be,’ said Ebersbach, looking him in the eyes, ‘but it got quite ugly when they searched your workshop.’

‘You ought to be. In my humble opinion, the only reason the Inquisition isn’t on your back already is because they still haven’t finished cataloguing the devilry they found there. Kantner may be able to protect you from the Sterczas, but not, I fear, from the In- quisition. When news of that sorcery gets out, he’ll hand you over to them himself. Don’t come to Wrocław with us, Reynevan. Take my advice – split off before we get there and flee, hide somewhere.’

TAGGED: Andrzej Sapkowski, The Witcher, The Tower of Fools