The TWIN PEAKS Influences of WANDAVISION

WandaVision is captivating us all with its strange ride through the MCU. When the series first dropped, many made comparisons to David Lynch and Mark Frost’s seminal surrealist series Twin Peaks. Of course, dozens of shows have been compared to Twin Peaks over the years. Its influence is so vast. Usually anytime someone says “Lynchian,” it just refers to stories which show the dark side of All-American suburban life. Or FBI Agents coming to small towns with strange goings-on. WandaVision shares those traits with Twin Peaks, but the other similarities are more than surface level. 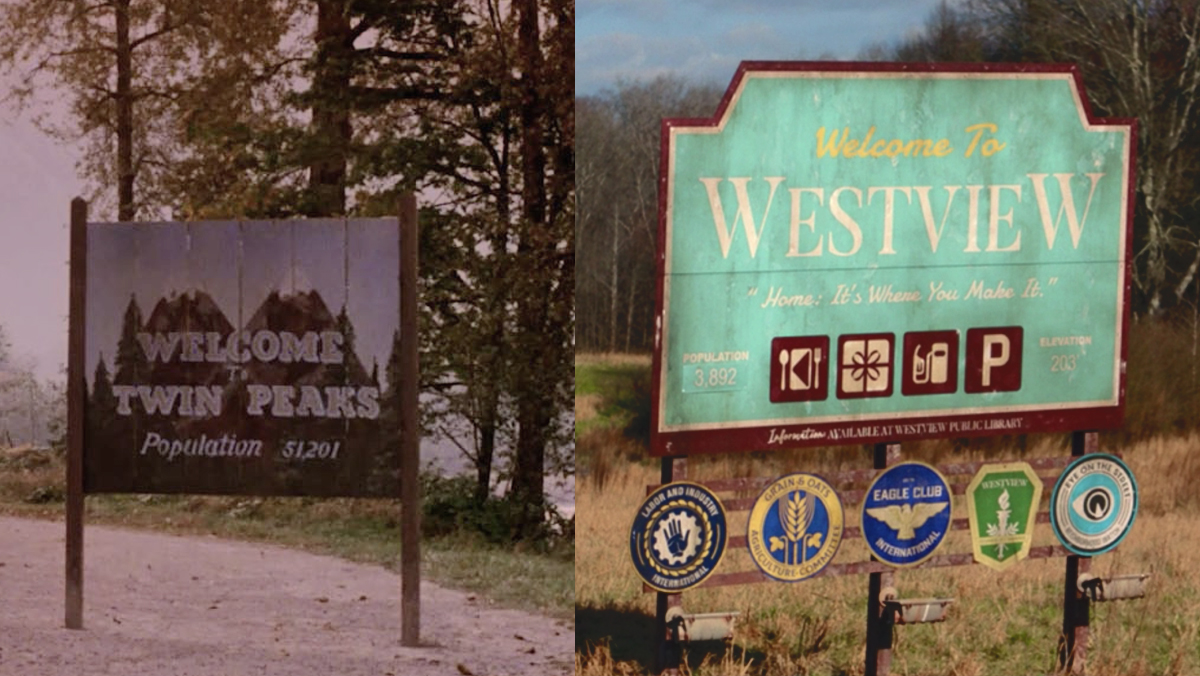 But as WandaVision has unfolded, more Twin Peaks connections and influences have been becoming apparent. Especially inspirations coming from 2017’s long awaited (and divisive) sequel series, Twin Peaks: The Return. Here are several ways we think the creators of WandaVision are wearing the influence of Lynch and Frost’s legendarily surreal series on their sleeves. Needless to say, massive spoilers from both series from here on out. 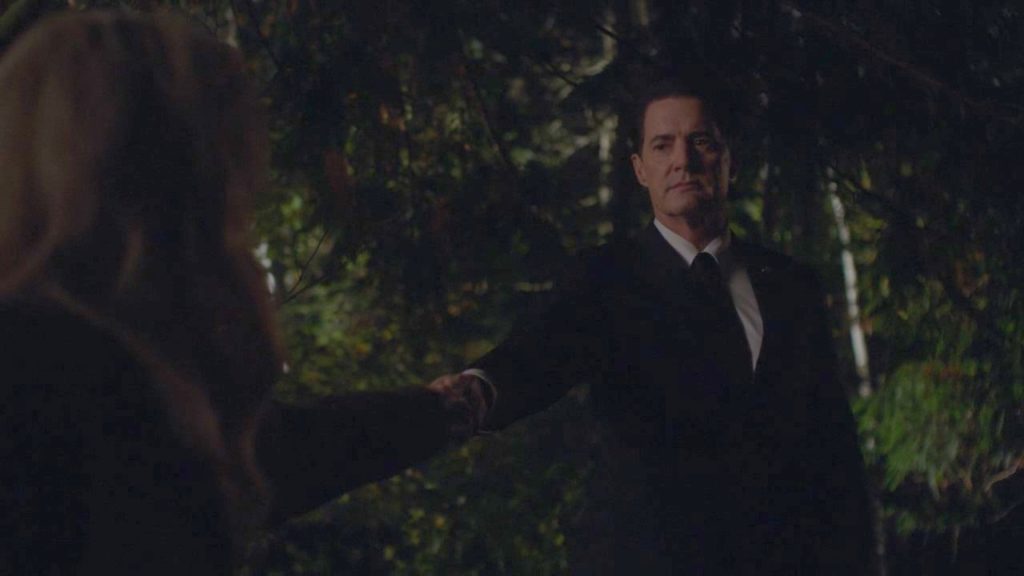 At the end of Twin Peaks: The Return, Agent Dale Cooper (Kyle MacLachlan) decides to use supernatural means to go back in time  and undo the death of teenager Laura Palmer. Laura’s murder launched the entire series, and brought Agent Cooper to Twin Peaks to solve the case. He succeeds in rescuing Laura from her grisly fate, but inadvertently creates a new reality. And it’s one that is equally unpleasant for Laura. The former Laura Palmer is now Carrie Page, a woman living in Odessa, Texas. She has no memory of her former life, and probably committed a crime herself. 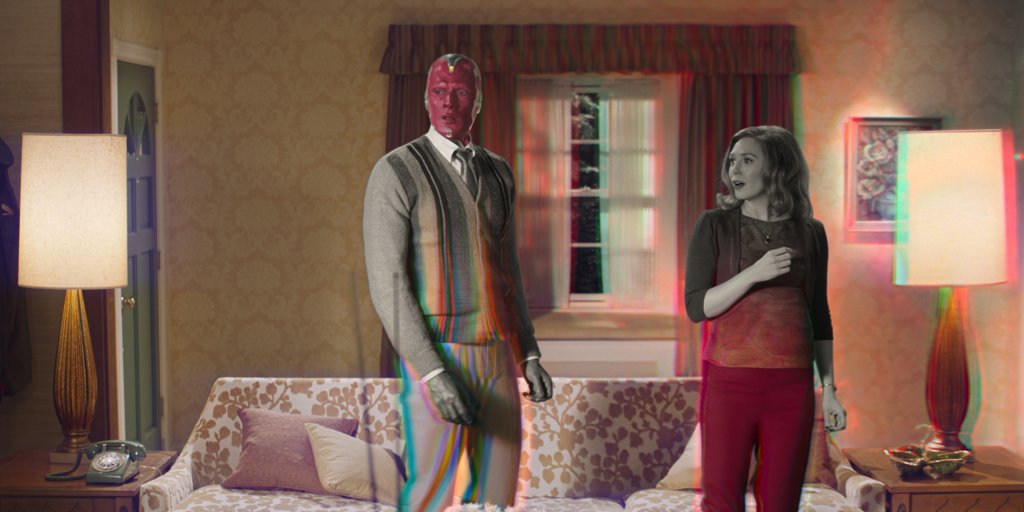 In WandaVision, Wanda “undoes” the death of Vision, thereby creating her own new reality. At first, the reality that Wanda creates seems much better than what she’s been living through. But just as in Twin Peaks, both new realities seem to ultimately fall apart. Twin Peaks: The Return ends with Carrie/Laura letting out a blood curdling scream, seemingly breaking free of this false reality. Will WandaVision end the same way, with Wanda finally facing her truth? The odds are likely.

Twin Peaks has another character in similar circumstance to Wanda, in the form of Audrey Horne (Sherilyn Fenn).  Especially the version of Audrey presented in The Return. In the original Twin Peaks series, Audrey is a teenage troublemaker who has a crush on Agent Cooper. She even helps him in his investigations. In the final episode of the original series, Audrey finds herself in a building when it explodes, and her fate is uncertain for 25 years.

Twin Peaks: The Return reintroduces Audrey Horne about halfway through the series. She’s seemingly married to a strange man named Charlie, and in a very unhappy partnership. Almost all of her storyline takes place within the confines of their house, and she doesn’t interact with the other characters. At one point, Charlie threatens to “end her story,” leading viewers to believe what we’re seeing of Audrey’s story isn’t real. The Return’s big mystery of what is going on with Audrey in this odd domestic situation is similar to how viewers feel watching WandaVision’s first three episodes. 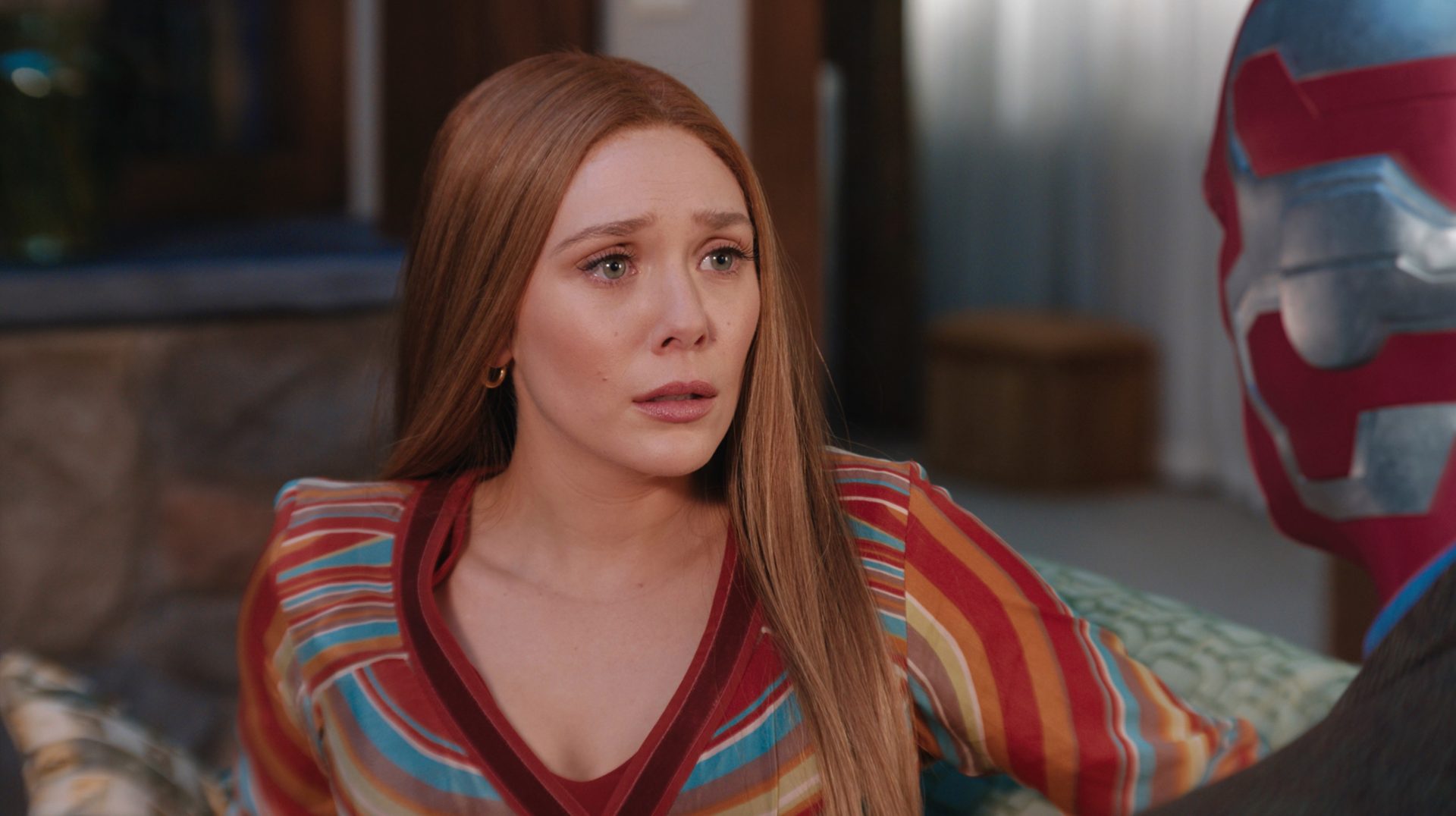 Audrey manages to go to the town’s local Roadhouse, where she eventually “snaps back” to reality, and we see her in a stark white room staring at a mirror. (Mark Frost’s novel Twin Peaks: The Final Dossier, strongly implies she’s in a private care facility). The implication here is everything we saw of her domestic life is an illusion she created in her own mind, probably to cope with the horrors that had been inflicted on her. Much like Wanda, the traumas Audrey faced forced her to build a false narrative for herself, one even she isn’t fully aware isn’t real.

They’re Both TV Shows About TV

Upon Twin Peaks‘ debut in 1990, it is one of the first mainstream TV series seen by many as “post-modern.” Twin Peaks is a show about television, as much as it is its own television narrative. It was a meta commentary on several different TV genres all at once—detective shows, crime procedurals, soap operas, sitcoms, and sci-fi series. In a much more literal way, WandaVision is also a show about television as much as a television show itself. It goes through almost the entire history of American sitcoms from the start, all as a way of telling its own unique story. In both series, television is the medium and what the story itself is about.

Doppelgangers, both literal and metaphorical, are a big part of Twin Peaks lore. Laura Palmer has an identical cousin named Maddy, both played by actress Sheryl Lee. Everyone in town had “two selves,” as they tended to live double lives. By the end of the original Twin Peaks, the doppelgangers are literal. If you entered the supernatural Black Lodge, you encountered your “shadow self.” Your literal double, who was a dark twin with white eyes. The end of the original Twin Peaks finds the real Cooper trapped inside the Lodge, while his dark doppelganger is let loose upon the world. 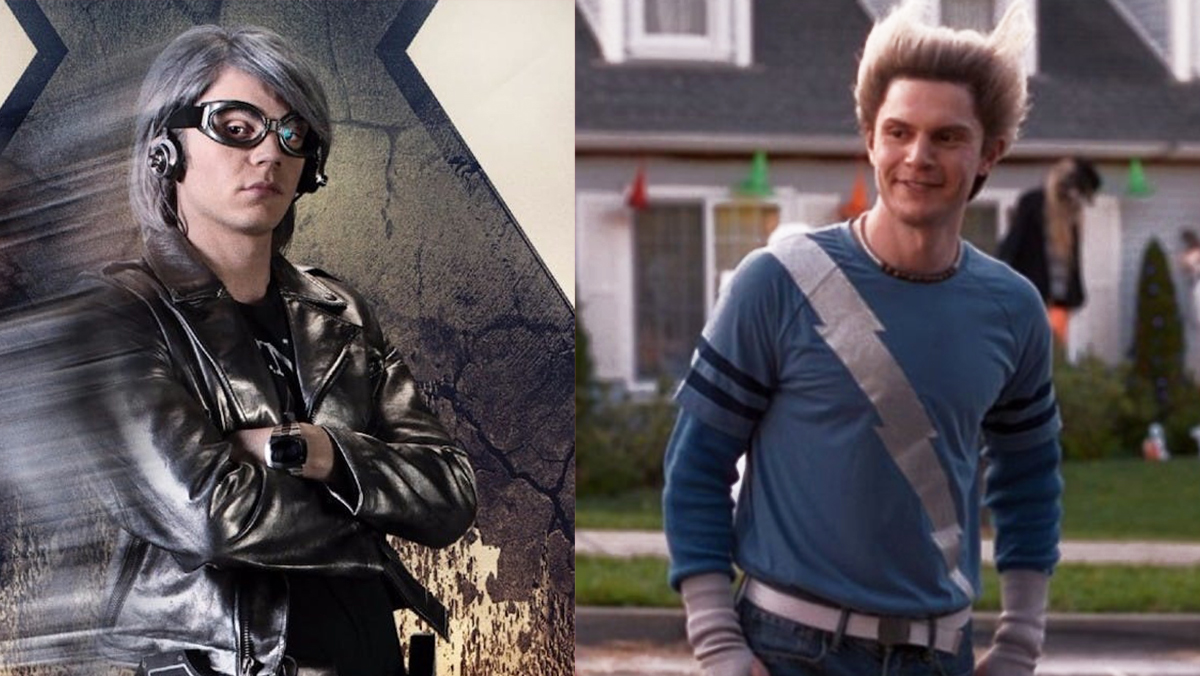 WandaVision introduces us to a doppelganger of Wanda’s dead brother Pietro in episode five. Only he’s not her big screen brother Aaron Taylor Johnson, he’s Evan Peters, who plays the same character in the Fox X-Men films. (We still don’t really know what the situation is with that). What he isn’t is Wanda’s dead brother resurrected. That effectively makes “Fake Pietro” a doppelganger of sorts. Even if he doesn’t look identical to his double.

Twin Peaks has done this before too. When the Black Lodge entity knows as “The Arm” tells Agent Cooper “when you see me again, it won’t be me,” the next time Coop saw him, in The Return, he’s a talking tree. In the world of Twin Peaks, that’s actually not all that weird.

In the original Twin Peaks, the mystery of who killed Laura Palmer drives the narrative. Twin Peaks’ reveal of who the big evil/murderer is ultimately isn’t what many viewers assumed. Popular consensus in 1990 tagged Laura’s killer as a resident drug dealer and domestic abuser. Or that her death had something to do with other illicit illegal activities in town. But it was none of those things. The real evil hid right under the viewer’s noses all along. It is Laura’s Palmer’s father Leland Palmer, possessed by an evil entity known as BOB, who abused and then killed his own daughter.

Similarly, WandaVision’s Agatha Harkness is a supernatural evil herself. An ancient witch, she disguises herself as “Agnes” the friendly neighbor who appeared in the very first episode. Both characters first present themselves as decades-old TV stereotypes. The caring family patriarch, and the “nosy neighbor.” But underneath both of these facades lies an ancient evil responsible for deception and destruction.  And in both cases, the evil is drawn to the power of a young woman who is at the center of everything.

As we said, Twin Peaks’ influence is vast on narrative television. Damon Lindelof was heavily influenced by The Return when crafting HBO’s Watchmen. And now, its influence has found its way into the MCU. We remain curious as to what other nods to Lynch and Frost’s surreal classic will pop up in what remains of WandaVision.