Twin Peaks debuted 30 years ago today on ABC, on April 8, 1990, creating an instant sensation. Although it only lasted two seasons initially, its pop culture impact and long term influence was as strong as any television series in history. To celebrate three decades of mystery, murder, and donuts, here are 20 ways that David Lynch and Mark Frost’s seminal series changed the pop culture landscape. 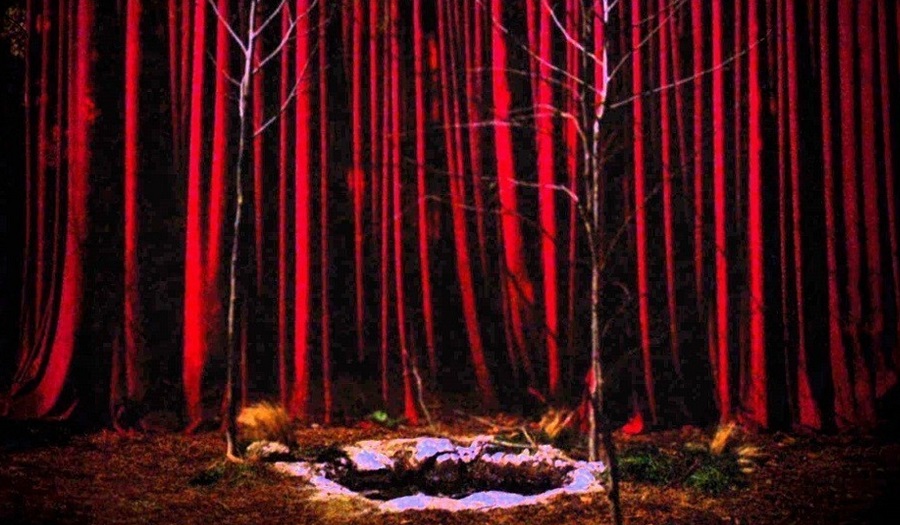 1. Blurring the Lines Between Film and Television

Before Twin Peaks, the worlds of film and television were almost totally separate entities. Film was regarded as an art form that pushed boundaries, and TV generalized by most as “the idiot box.” But when an Oscar-nominated director like David Lynch brought his idiosyncratic vision to network television, those lines began to slowly evaporate. Thirty years later, those lines no longer really exist, as evidenced by all the great filmmakers and film actors working in television. And Twin Peaks was ground zero for this.

J.J. Abrams might have coined the term “ the Mystery Box” to describe the driving narrative force in the kinds of series he makes, but he didn’t invent the concept. While Lost might have popularized the notion of a (usually supernatural) mystery lying at the heart of a series, it’s fair to say that Twin Peaks set the standard for this kind of TV storytelling way back in 1990. 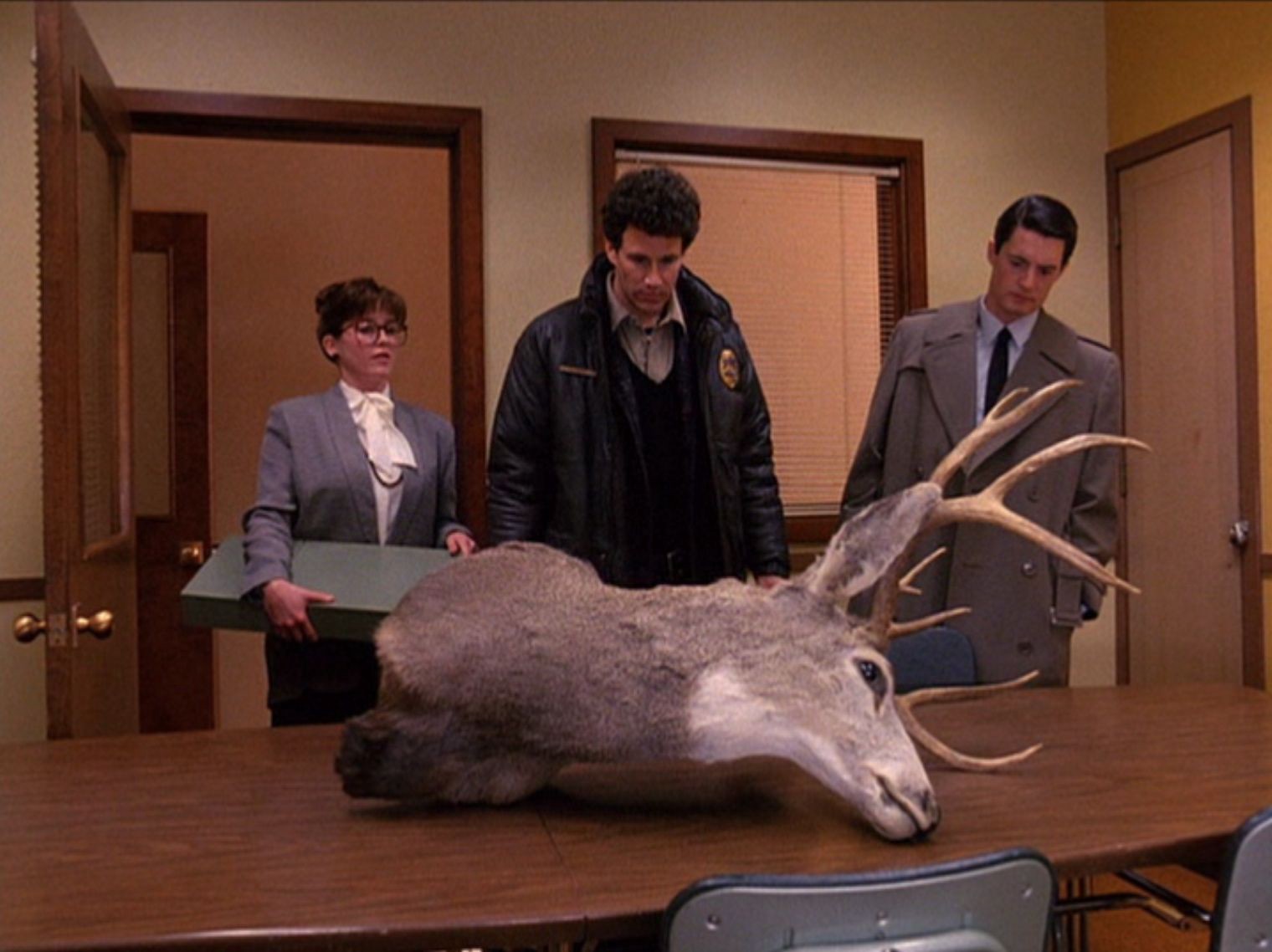 Before Twin Peaks, narrative network TV was very strictly categorized. You were a procedural, a sitcom, or a soap opera, with very little variation in between. But Twin Peaks was as much a nighttime soap as it was a detective show as it was supernatural horror as it was an absurdist comedy. These days, shows mix genres all the time—Buffy the Vampire Slayer also helped push this idea along—but it was Twin Peaks that really broke that mold.

Score has long been widely acknowledged as a crucial part of what makes a film work. But for ages, no one thought much about the actual music within an episode of your standard show, outside of a series’ theme song. Angelo Badalamenti’s moody, jazzy score for Twin Peaks was unlike anything else heard in mainstream television. In its wake, it pushed other shows to do better when it came to their musical scores. 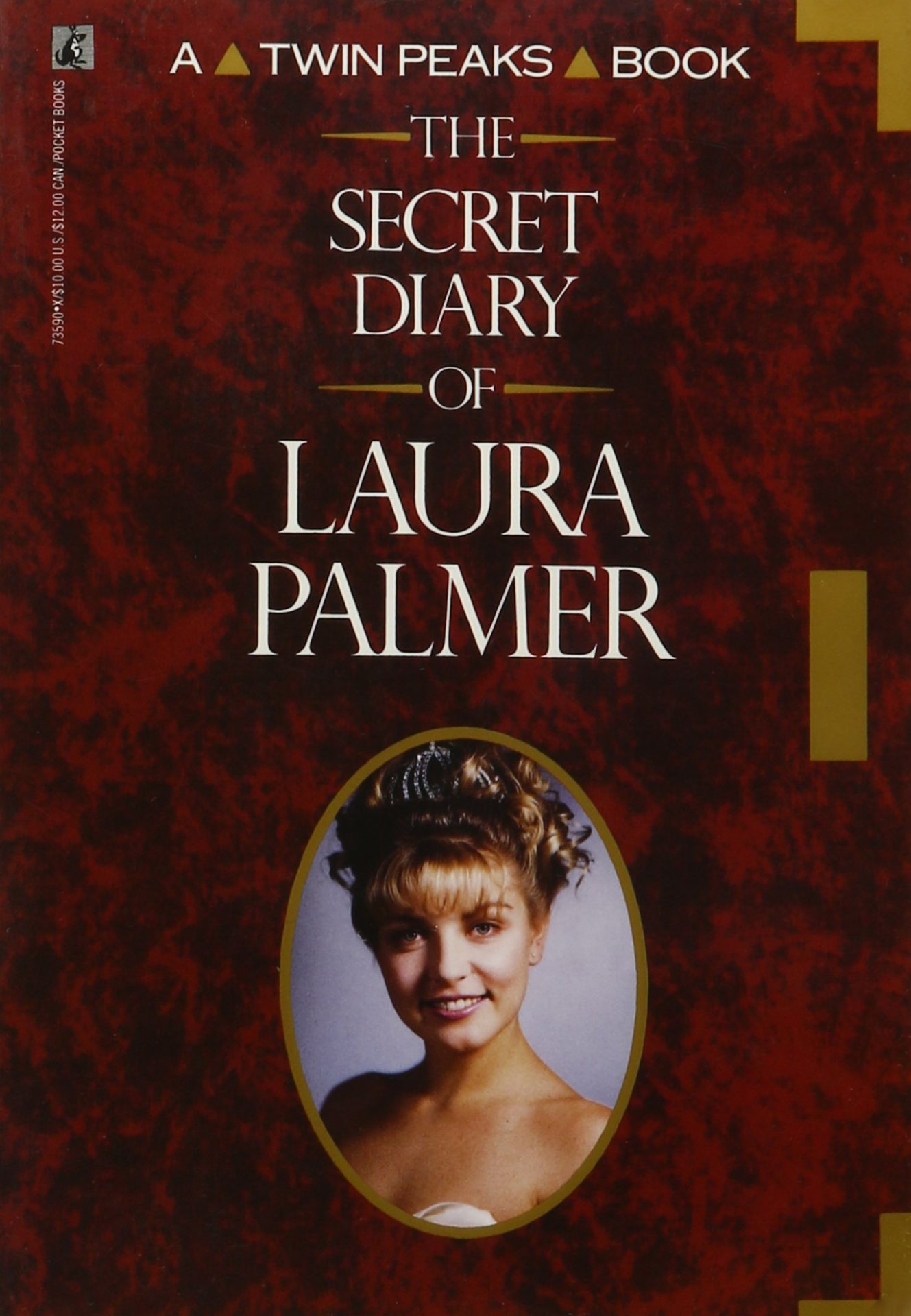 Popular franchises had tie-in novels and other media before, most notably Star Trek and Star Wars. But they were never considered canon, or essential parts of the narrative. But in 1990, David Lynch’s daughter Jennifer wrote The Secret Diary of Laura Palmer, a crucial piece of the overall Twin Peaks storyline. Even Agent Cooper’s audio tapes were released as part of the official story. These days, every major franchise has an official tie-in that occurs outside the main film or series, whether it’s a book, a game, or a website. If Twin Peaks wasn’t the first to do it, it certainly was the first to do it well.

Before Twin Peaks, criminal investigations on television tended to wrap up in an episode or two. The infamous “who shot J.R?” whodunit on Dallas in 1980 tested audience patience for its time. And the mystery only lasted four episodes! But Twin Peaks’ murder mystery lasted half the series. The mystery of Laura Palmer’s death inspired season long murder investigations on everything from The Killing to season one of True Blood, to True Detective.

The notion of a small, idyllic American town holding strange secrets is now a staple of genre TV storytelling. Think Sunnydale, California on Buffy, or Wayward Pines. Probably the most popular recent example of this is of course Hawkins, Indiana on Stranger Things. But when it comes to small towns with a weird vibe on TV, all roads lead back to Twin Peaks, Washington.

Much of Twin Peaks’ original appeal to audiences at the times was showing the shadowy side of classic Americana. It wasn’t the first time this was done, or even the first time David Lynch experimented with this material (see also: Blue Velvet). But Twin Peaks certainly mainstreamed the idea that behind every white picket fence and wholesome diner was someone’s dark secret. Not only have tons of other media followed Peaks in exploring this, but one can say singer Lana Del Rey’s whole musical career is this. And speaking of musical careers…

He’s considered a legend in the world of EDM now, but in the early ‘90s, Moby was just a young artist starting out in the music industry. His very first club hit in 1991 though was “Go,” which famously sampled “Laura Palmer’s Theme.” His Twin Peaks fandom would come full circle when he’d play at the Roadhouse with Rebekah Del Rio in 2017’s Twin Peaks: The Return.

In the 30 years since the series debuted, a lot of modern TV has caught up to the things that made Twin Peaks revolutionary. But one thing Twin Peaks did that few shows have followed in is David Lynch’s trademark surrealism. But just because few series have gone as full tilt weird as Twin Peaks did, that doesn’t mean none have. The FX/Marvel series Legion certainly followed in Peaks‘ surrealist wake, as did Black Mirror and and Sense8. But if you ask me, none of them can touch Lynch’s trademark weirdness. 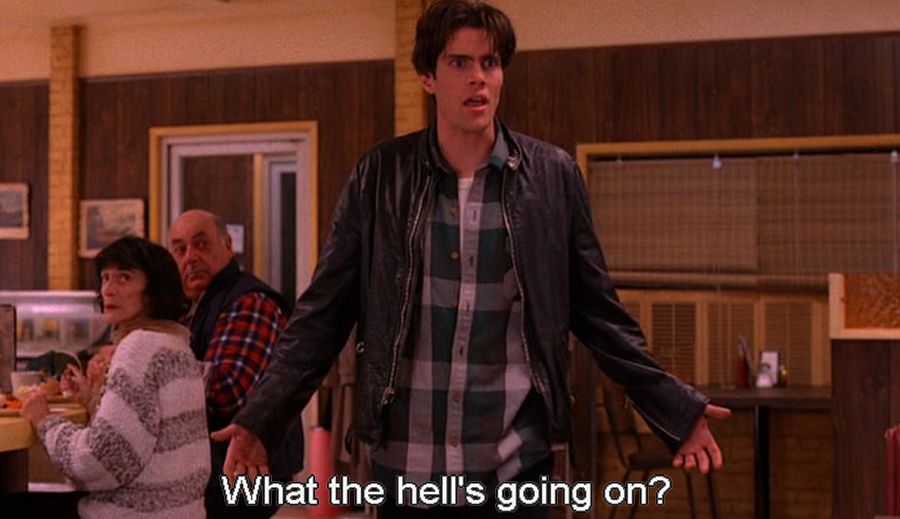 When Nirvana broke big in 1991 with their album Nevermind, the Seattle grunge rock sound took over the country. And soon, so too did their entire fashion aesthetic. But further up north from Seattle, bad boy Bobby Briggs (Dana Ashbrook) was sporting the look that would define the ‘90s: flannel, boots, a leather jacket, and a mop of floppy hair. And he did it all a year before most people knew who Kurt Cobain and Eddie Vedder even were.

Back in the ’60s, actors like Richard Beymer and Russ Tamblyn were movie stars who headlined in West Side Story, and Piper Laurie was an Oscar nominated actress. But Hollywood had left them behind once they hit a certain age, as Hollywood tends to do. Lynch and Frost cast them in Twin Peaks, giving them all a second act that garnered them much acclaim, and proved that movie actors can find fulfilling work on TV after their days of box office success were behind them. 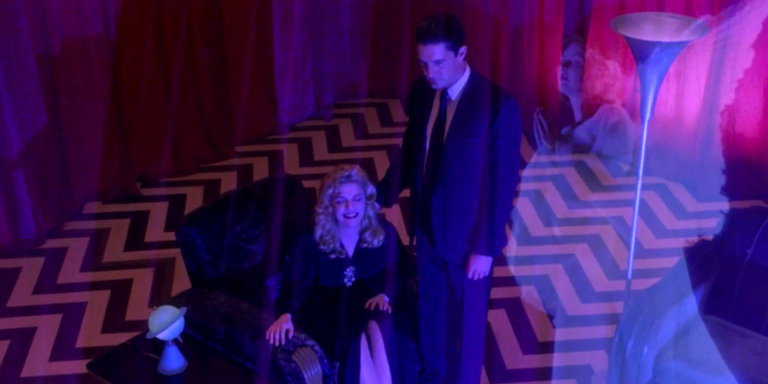 There had been movies that took place chronologically before their previous installments before David Lynch’s feature film version of his series. One good example is The Good, the Bad, and the Ugly back in the ’60s. But the term “prequel” wasn’t really used. But despite what one might think today, Star Wars wasn’t the first time one read the term prequel being used in reference to a then-upcoming movie. It was with 1992’s Twin Peaks: Fire Walk With Me. Since then, prequel has become a term and concept everyone knows, and a go-to Hollywood tradition. 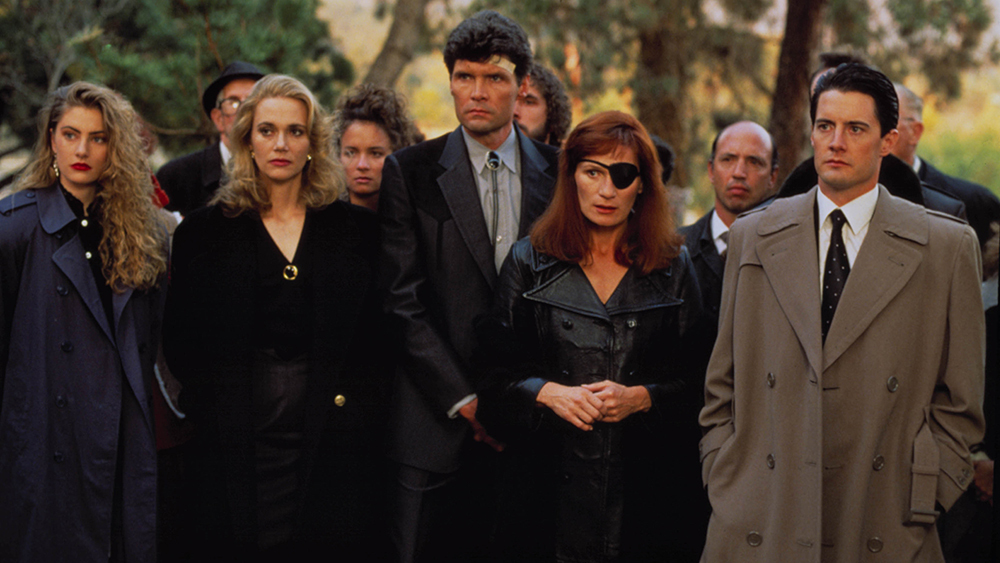 Most TV series before Twin Peaks only had a handful of main characters. Even the daytime soaps had maybe 15 or so regular and recurring actors. Then Twin Peaks pilot introduced a whopping 33 main characters in its first 90 minutes, all who had their own plotlines and story threads. This was overwhelming to most audiences at the time, but it set the standard for later shows like Lost and Game of Thrones.

While tons of other TV shows have mimicked Twin Peaks in various ways, the creators of video games like Deadly Premonition, Alan Wake, and several others have very obvious Twin Peaks influences.

Twin Peaks has been referenced in countless other media over the past three decades, and many of these references are now as memorable as Lynch’s series itself. From Chief Wiggum’s dream in The Simpsons, to the Anthrax song “Black Lodge,” to Alicia Silverstone having a “Twin Peaks experience” in Clueless, all of these classic pop culture moments couldn’t have existed without Peaks to inspire them.

There have been urban legends about the U.S. government’s investigations into UFO phenomenon for decades, along with stories about the Air Force’s real life Project Blue Book cases. Twin Peaks used these studies as a source for its mythology; the series’ narrative really started mining Project Blue Book in a big way, years before X-Files and History Channel’s current Project Blue Book series.

18. Proof That the Emmys Don’t Always Get It Right

Twin Peaks was nominated for a then-whopping 16 Emmys during its two year run. But it was basically snubbed in all categories, losing Best Dramatic Series twice to L.A. Law. But here we are, still talking about the show 30 years later. Twin Peaks wound up starting a tradition of groundbreaking left-of-center shows getting little to no love from the Television Academy. Buffy and The Wire were similarly snubbed, and yet are widely accepted as revolutionary today. It many ways, Twin Peaks was the first series to show that the Academy doesn’t always know best.

And no shade against L.A. Law, but not that many people are sporting tattoos of it these days. Twin Peaks sure does though. 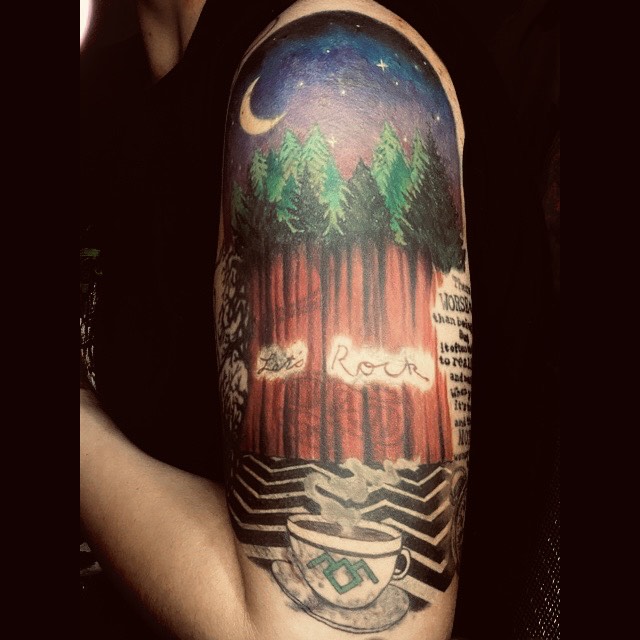 These days, every show has a reddit thread or a YouTube channel trying to unpack plot points. But in 1990, few people outside of universities had ever even heard the term “internet.” In those early days, Twin Peaks made for one of the most popular discussions on what was then a little known thing called usenet. Series co-creator Mark Frost was once given reams of paper that were printed out fan discussions on something called “alt.tv.twin-peaks.” Right there was a glimpse at the future of how fans would interact with all of their favorite series.

It’s too soon to really assess what effect the long-awaited third season of Twin Peaks has had on pop culture overall. Twin Peaks: The Return was critically acclaimed but divisive among fans. Among those who loved it was HBO’s Watchmen creator Damon Lindelof. He has already admitted that his series was largely inspired by David Lynch’s epic “18-hour movie,” which aired on Showtime in 2017. There are a ton of similarities between the series, and they even had one important needle drop in common to cement that connection. So if you loved Watchmen, in part you’ve got David Lynch and Mark Frost to thank.