TWIN PEAKS Answering Its Core Mystery Was Good and Bad

In 1990, Twin Peaks was a television pop culture phenomenon. The series gets America hooked to a compelling whodunit, revolving around a murdered teenager in the Pacific Northwest named Laura Palmer. And on November 10, 1990, after seven long months, the world finally got their answer to this mystery. It results in perhaps the show’s finest hour — but also the beginning of the end for the series.

So why did the network kill their golden goose by forcing a resolution so fast? And was resolving the mystery ultimately what makes Twin Peaks resonate so much as a narrative three decades later? Needless to say, there are massive spoilers for Twin Peaks in its entirety from here on out. 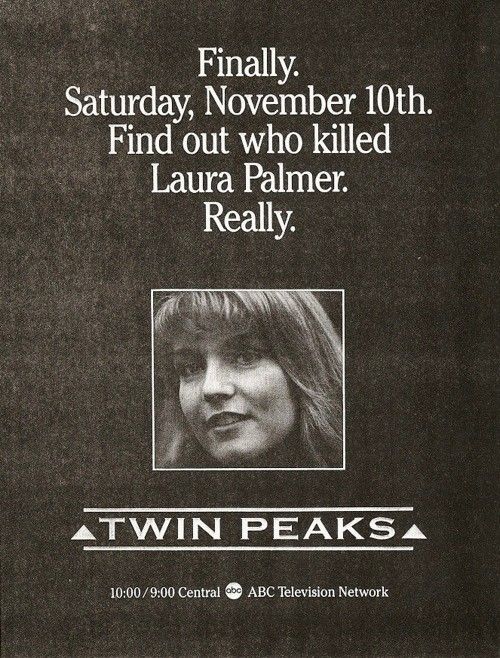 Twin Peaks debuted to record breaking ratings in April of 1990, capturing the attention of the world. “Who Killed Laura Palmer?” became a national obsession. But 30 years ago, the general TV audience had far less patience for ongoing narratives. They wanted their mysteries resolved, and resolved quickly. A special two part episode was acceptable, but to keep a mystery going for the entire length of a series? That was unheard of. We were just not that patient of a viewing culture back then.

The first eight-episode season ended in May of 1990. Audiences were furious that the question of who killed Laura was not answered. When Twin Peaks returned for season two four months later, its two hour opening once again refused to answer the question, and angry audiences left in droves, feeling betrayed. It didn’t help that Twin Peaks’ new day and time slot were Saturday nights either; most teens and 20s viewers were not at home. 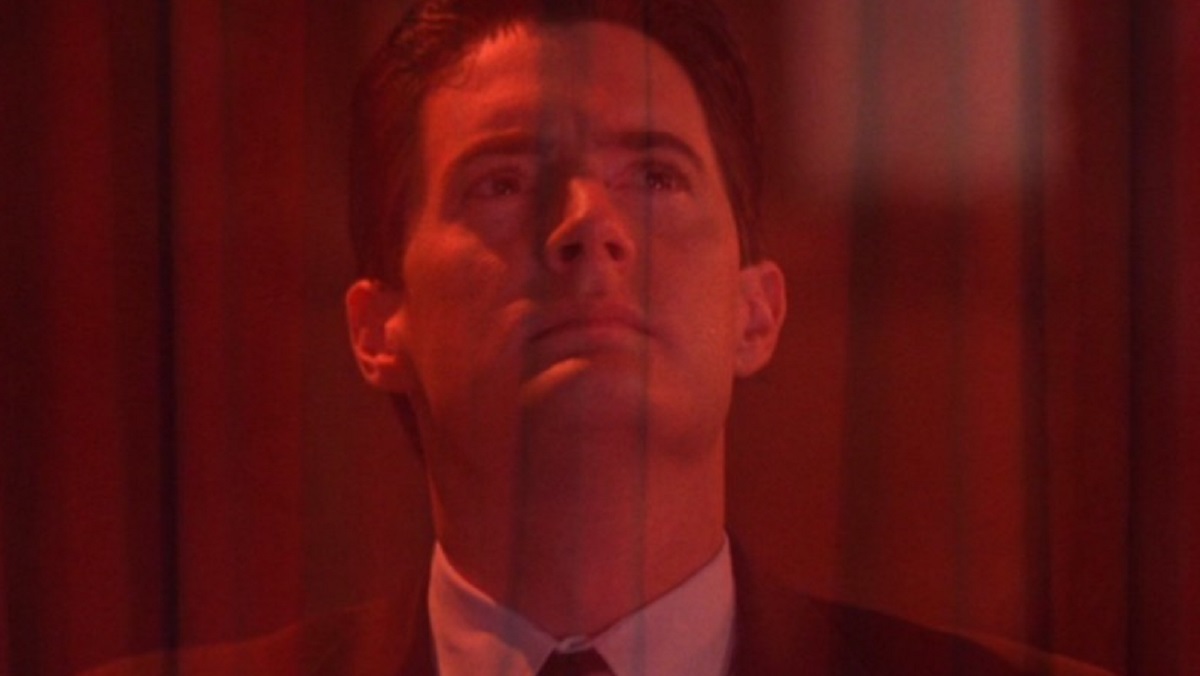 The ABC network demanded that David Lynch and Mark Frost, the series’ co-creators, resolve the mystery. Lynch did not wish to ever resolve it at that point, believing that this particular mystery was eternally sacred. Other mysteries could come and go, but the core one had to remain an enigma. Frost felt somewhat differently by all accounts, believing the mystery should be solved—but only at the very end of the series’ run. It seemed both men realized that the mystery was at the core of the show’s appeal. But due to incredible network pressure—from future Disney CEO Bob Iger no less—they both caved. 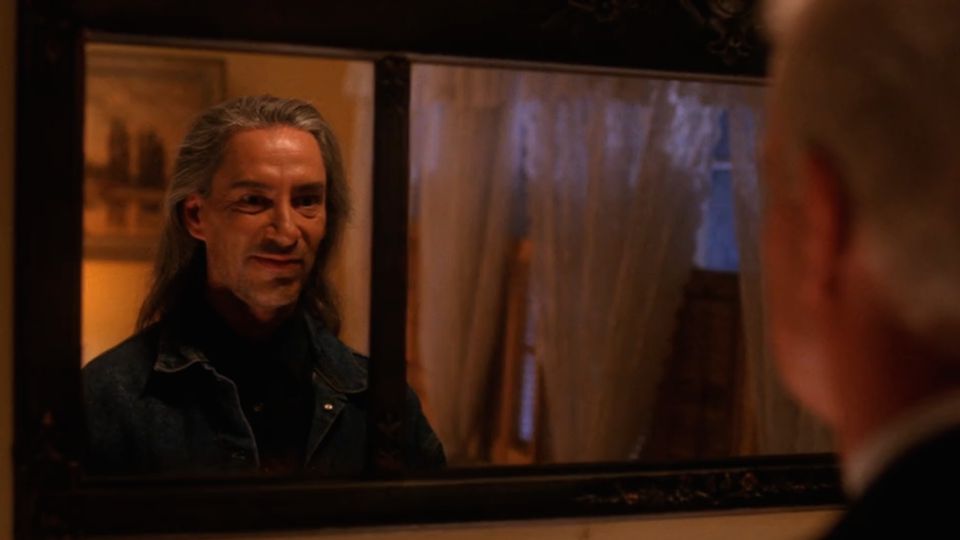 ABC announces that on the November 10, 1990 episode, the mystery will be solved “finally.” Mark Frost and David Lynch co-write the episode, and Lynch directs. If they had to answer the question, they were going to do it in a way no one would forget. This would be both a good thing and a bad thing. It was a creative high point for Twin Peaks, delivering an hour that will go down in the history of television. But it was also the beginning of the end.

By this point in the series, all signs pointed to BOB, a demonic entity that no one could see in the real world, as the culprit for killing Laura. In the episode’s most harrowing sequence, BOB inhabits the body of Leland Palmer (Ray Wise), Laura’s father. He drugs his wife Sarah (Grace Zabriskie) to keep her from realizing what’s about to happen. He then murder’s his niece Maddy (Sheryl Lee), in a brutal and bloody scene that I still can’t believe made it past network censors. The audience found out who killed Laura by watching the culprit murder another beloved cast member. This is stuff that just didn’t happen on TV back then. 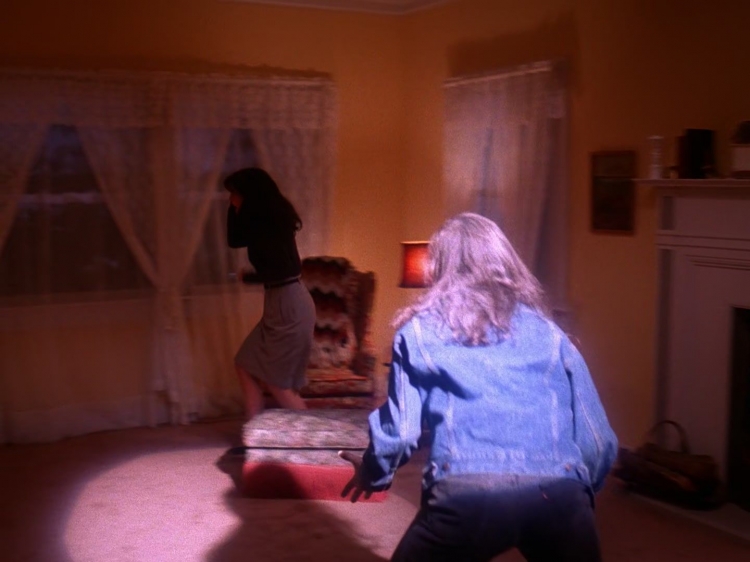 The entire episode is utterly fantastic, but the final act is one of David Lynch’s finest hours as a director. He bookends the scene of Maddy’s murder with Agent Cooper (Kyle MacLachlan) and several of our main cast at the local Roadhouse. When the mystical Giant appears to him and tries to warn our hero that “ it is happening again,” we know something horrible was about to go down. And after the murder, we return to the Roadhouse, where a painfully sad song by Julee Cruise plays, “The World Spins.” Laura’s best friend Donna, and her boyfriend Bobby, suddenly begin to cry. 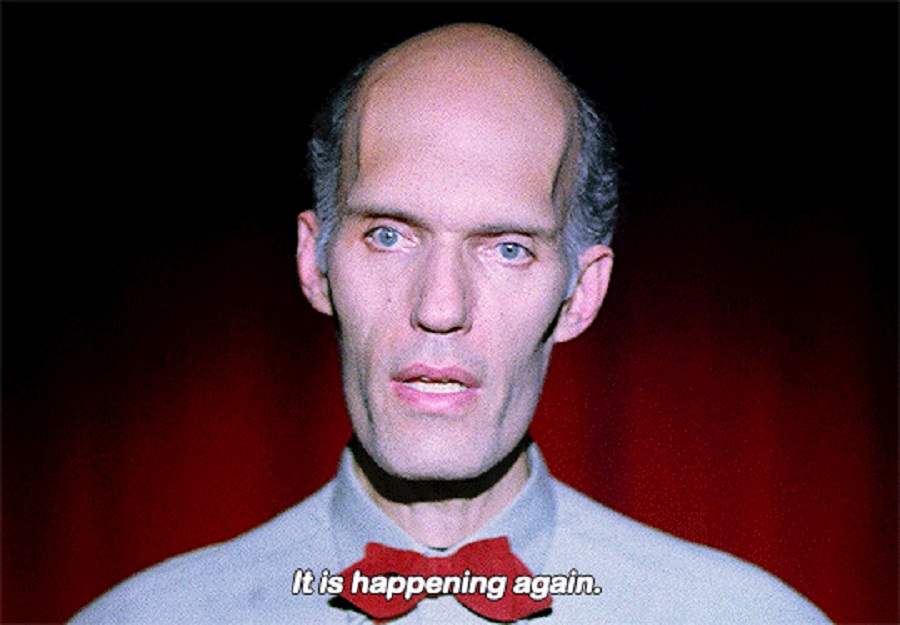 Viewing the episode back in the day (at my obligatory high school Twin Peaks viewing party) several of my less Peaks-obsessed friends were confused at the tears coming from those characters. But I wasn’t. I understood those closest to Laura realized what they had always suspected. Laura’s father not only was her killer, but he was sexually abusing her for years. It is the only explanation that not only makes sense as to who had killed her, but as to her entire personality. Laura’s loved ones simply always knew the truth, and didn’t want to admit it to themselves till that moment. Lynch and Frost were brilliantly telling us, the audience, that we always knew the answer too. It was right in front of our noses. We just didn’t want it to be true. 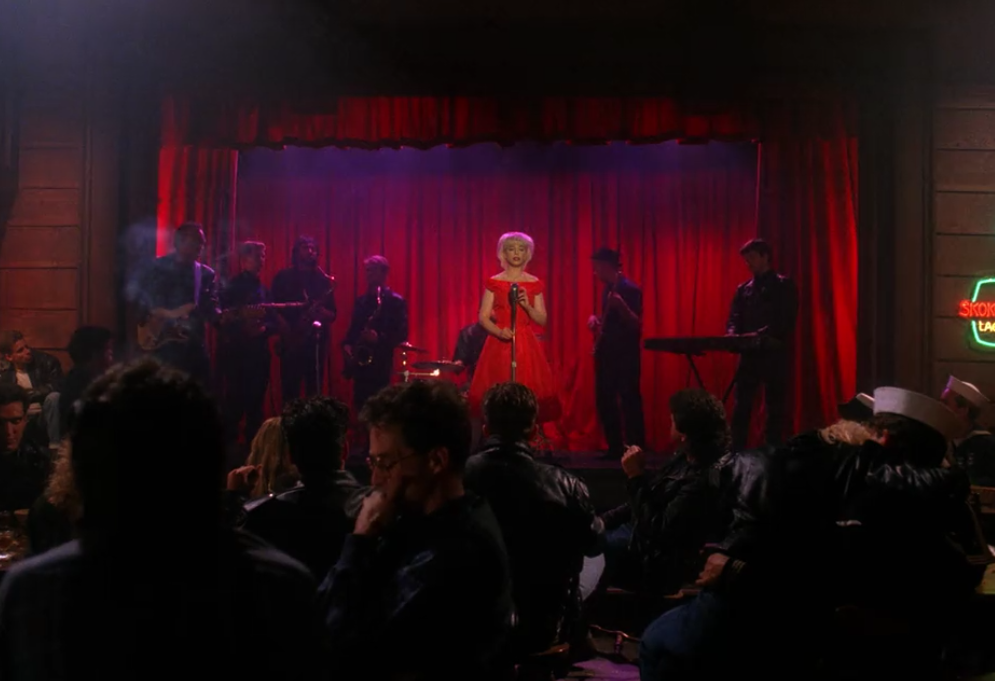 This episode received the highest ratings since the second season premiere; on par with the episodes in season one. But once the murder storyline wrapped up just two episodes later, ratings went downhill fast. And so did the overall quality of the series. In hindsight, it seems ABC just wanted to kill the show off, but knew it couldn’t do that until they solved the mystery. The network realized they would get way less pushback from angry viewers if they forced the show’s creators to solve the murder. And then they could cancel the show. Which is exactly what happened. 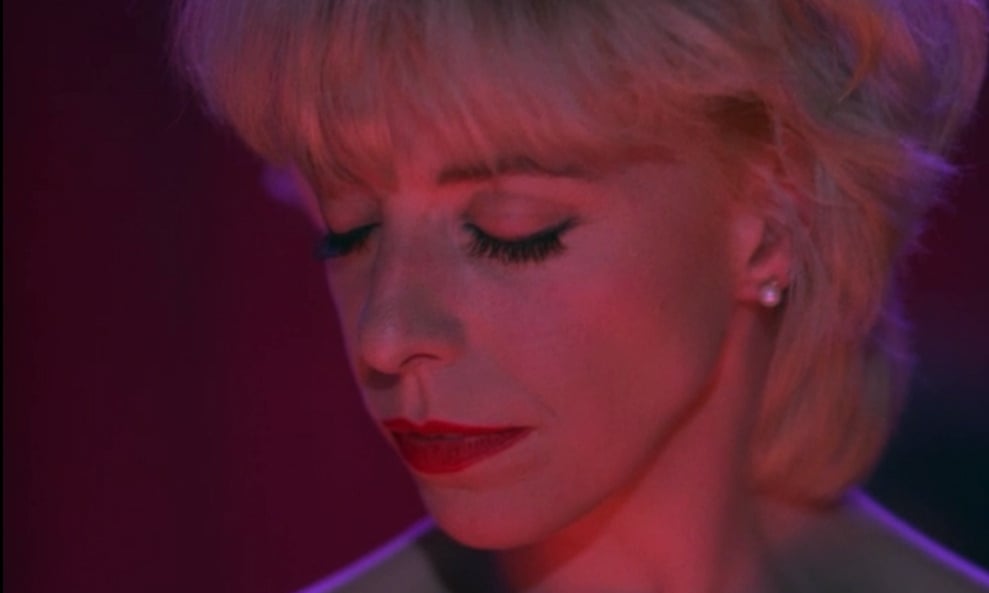 The six-or-so episodes following the end of the “Who Killed Laura?” storyline often feel like it’s another series all together. They’re not entirely bad, and even progressive in many ways. David Duchovny plays a transgender FBI agent during this string of episodes in fact, which was a big deal for TV then. But the following few episodes seem just too “normal” for many Peaks fanatics. And chiefly, they were too weird for the general audience, making almost no one happy. It didn’t help that Lynch and Frost essentially felt they told the story they set out to tell, and largely abandoned the show for some time. The sad part is, the last few episodes saw a return to the show’s former quality. But it was all just too late.

But regardless of what revealing the killer did to the series itself, it broke another huge television barrier anyway. The scene was straight out of a horror film, featuring blood and absolute terror in a way mainstream TV just did not during this era. When the prequel film Fire Walk With Me came out two years later, the murder scene in the R-rated film is actually less disturbing somehow. And it’s no coincidence that in the immediate years after this episode aired, horror themed programming would find a whole new life on TV. It started with The X-Files, and continued on to Buffy the Vampire Slayer, and ultimately to Stranger Things today. 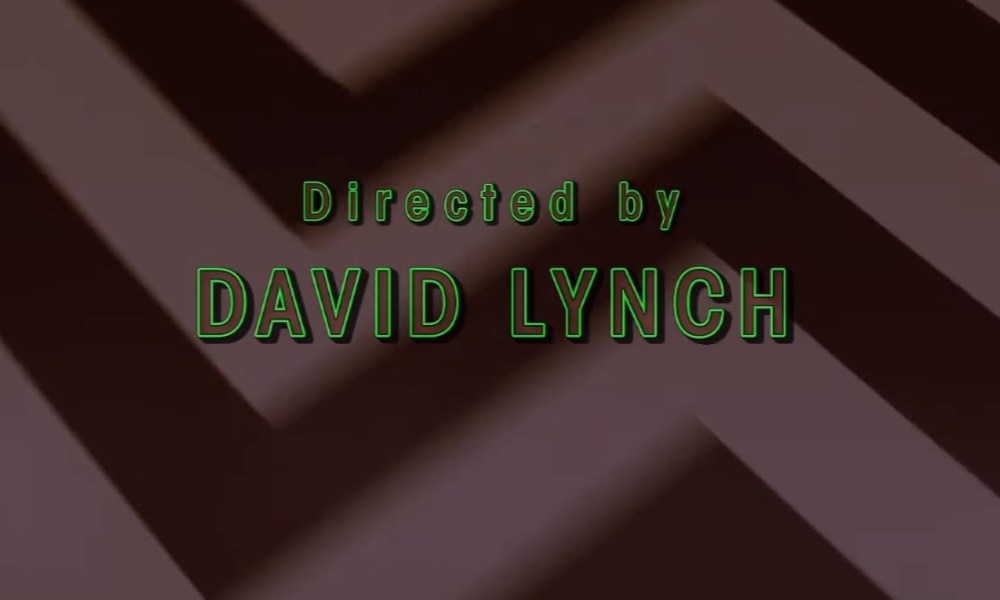 This episode might have ultimately ended the series, but it also cemented its legacy. If Twin Peaks had simply never resolved its central mystery in such spectacular fashion, it might not have garnered so much praise, nor would subsequent generations keep rediscovering it on home video and streaming.  Episodes 1-17 of the series form a compelling narrative all by themselves, regardless of what happened later. So while the network’s decision to force the end of the mystery may have killed its chances for more seasons, the episode where the payoff arrives sticks the landing so memorably, it’s a large part of the reason the series remains so beloved to this day. So Lynch and Frost made the right call to reveal who killed Laura Palmer. We might not still be talking about Twin Peaks thirty years later if they hadn’t.