Maybe no other kind of tale is as prevalent in storytelling as the revenge story. Maybe up there with the meet-cute. It’s a universally recognized set-up: someone wrongs someone else; wronged party seeks retribution. Whether it takes a day or 50 years, whether the revenge-seeker is successful or not, the pursuit of righteous vengeance is a staple. And nowhere is the revenge story as ubiquitous as the Italian western cycle. Hundreds of Euro westerns came out in the ’60s and ’70s, and I’d bet a full 50% or more of them have a theme of vengeance.

However, as Arrow Video‘s new  Vengeance Trails box set illustrates, there are many ways to depict revenge. The set contains four films from four different directors, all with the theme of vengeance. Each take is astonishingly different. Even though, ostensibly, they’re all about one guy trying to kill another guy because of bad stuff.

Let’s go through each of the films and how they each tackle their protagonists’ quest for blood. 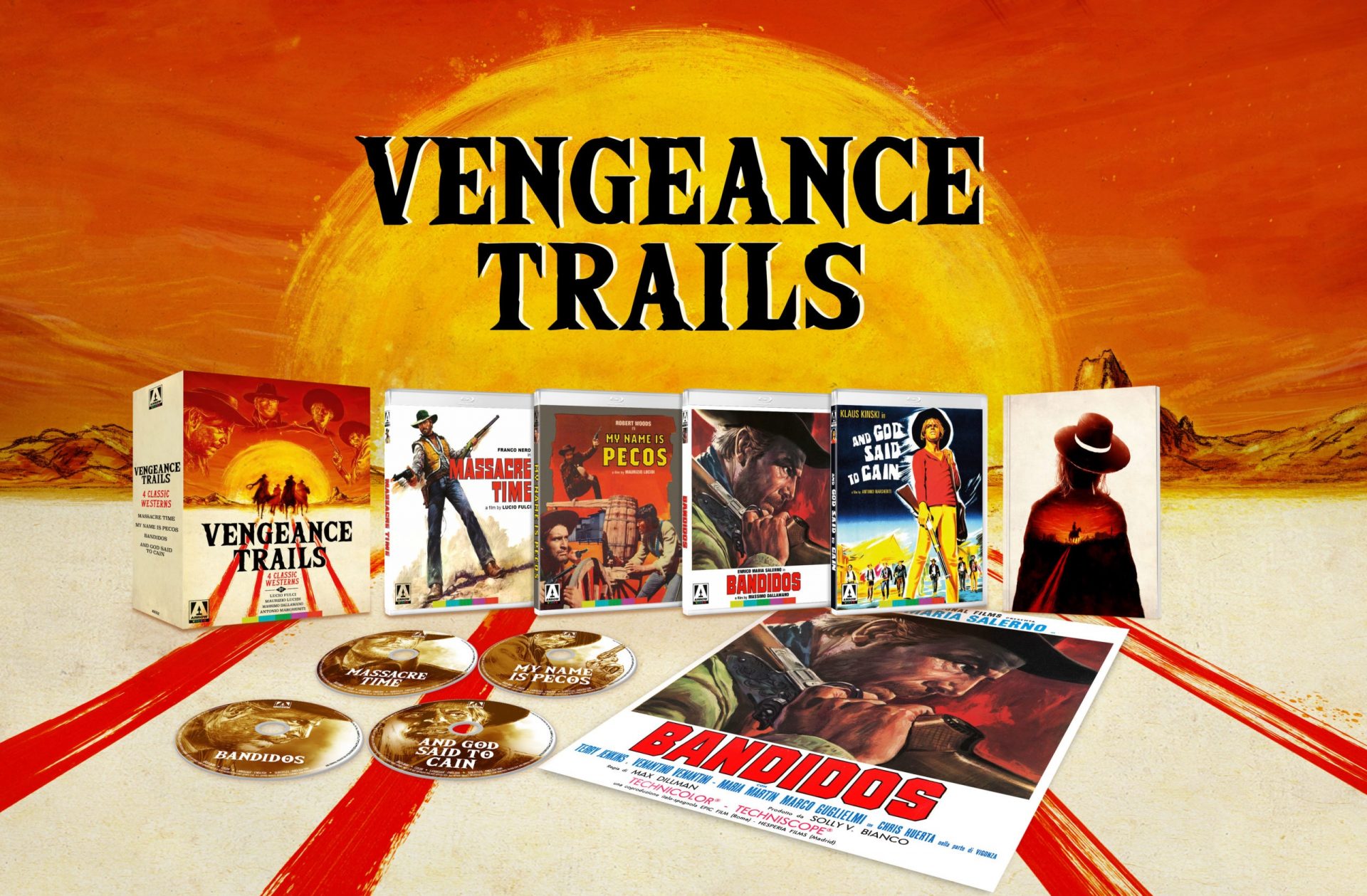 Director Lucio Fulci‘s name is synonymous with gruesome, gory horror films adorning the video nasties list. But those largely came about later in his career. Earlier, he made all sorts of movies, from comedies to gialli to, yes, even westerns. Fulci didn’t make nearly the number of westerns as other Italian directors. The westerns he did make, though, are fascinating, often very bleak reflections on the cruelty of the world. His 1966 outing, Massacre Time, leans heavy into the sadistic violence for which he’d become famous, but also has a sense of adventure and offers some buddy comedy flare.

The film stars Franco Nero, fresh off of his success in Sergio Corbucci’s Django. He plays Tom, the son of a wealthy widow who had sent him away years earlier. Following her death, Tom receives a letter beckoning him back to his childhood home, but when he arrives he finds it abandoned. The town is now under the control of the Scotts, despite Tom’s brother Jeff ( George Hilton) having been the beneficiary of their mother’s will. Tom quickly learns Jeff is a drunkard who allowed the Scotts to take the land. But the Scotts’ lineage is a bit more muddied, and Tom soon comes up against Scott’s eldest son and heir, Jason (Nino Castelnuovo). 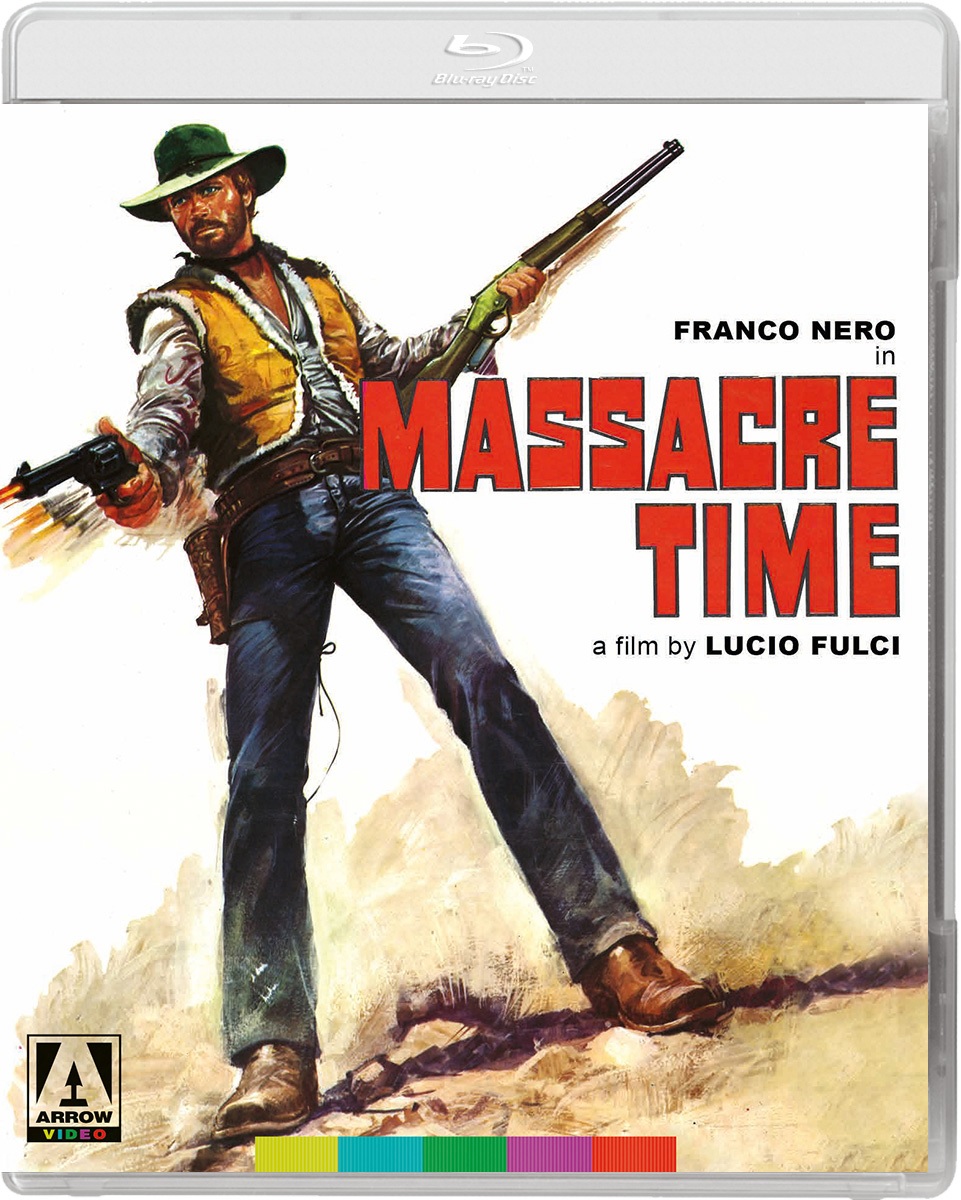 This is an interesting example of a revenge story that doesn’t seem like one for a while. Tom has no idea what has become of his hometown prior to arriving, and he doesn’t learn his personal truth until much later. The resentment Jeff has toward him after this revelation feels very relatable, and much of the movie’s success rests on wanting these two to make amends. Nero and Hilton, two huge stars of Italian genre cinema, are wonderful together, and Castelnuovo is perhaps one of the vilest villains in a genre full of them.

One of the hallmarks of revenge in the western is the central figure of “the mysterious stranger.” This person (usually a man in these movies) strolls into town, their motivations hidden until the climactic moment. My Name is Pecos, also from 1966, plays into this trope. Everyone wants to know who this mysterious Mexican is who comes to Houston looking for retribution. All he says is his name is Pecos (Robert Woods) and he has his eyes focused squarely on Joe Clane (Pier Paolo Capponi).

As the movie unfolds, we learn that Clane killed Pecos’ family when he was a boy. Several people in town, including a cowardly saloon owner; an undertaker; and a showgirl; want to help Pecos and escape the tyranny of Clane and his gang. Add to that, hundreds of thousands of dollars in stolen gold; a whole bloody affair commences. 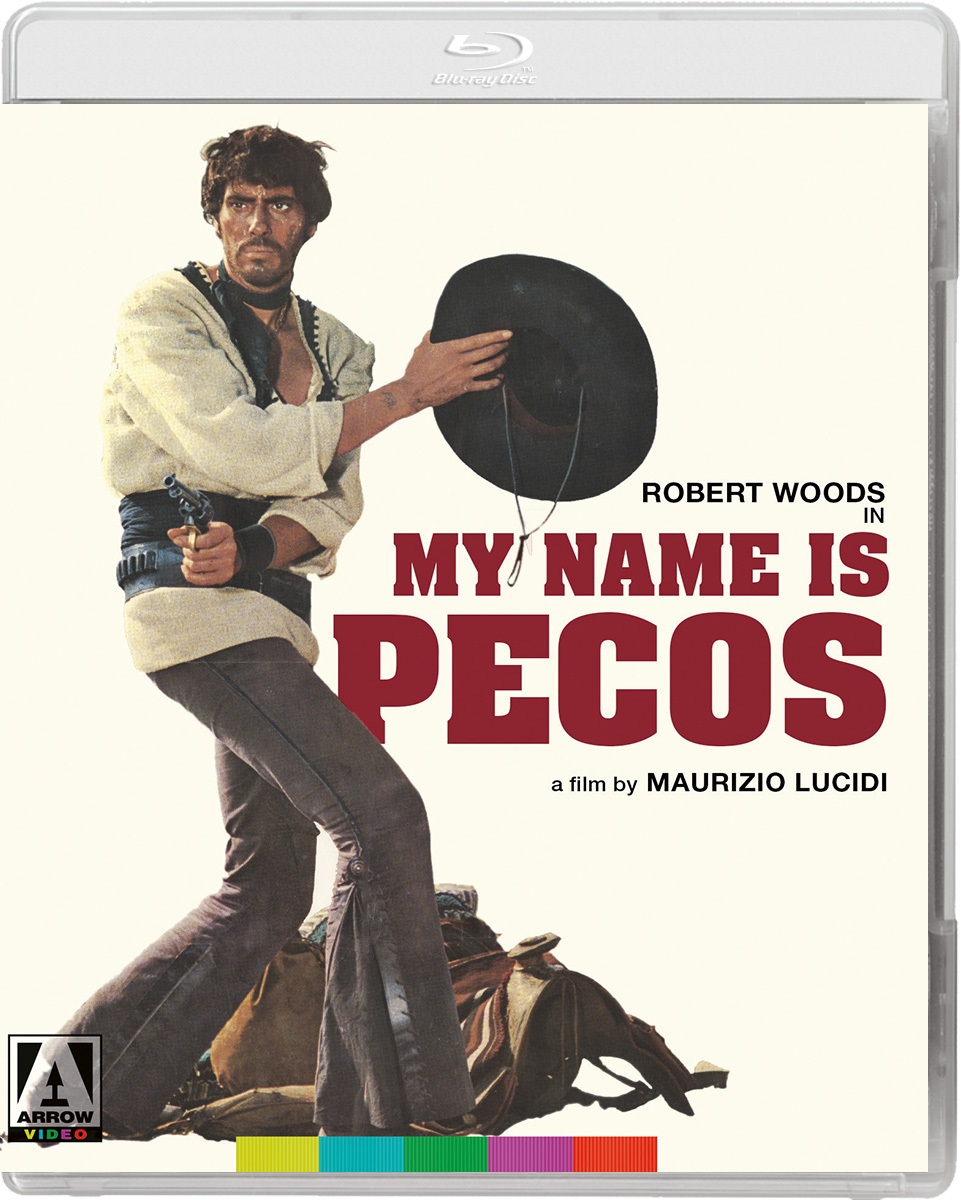 Of the directors featured in the set, Maurizio Lucidi is the one with whom I had the least familiarity. A film editor before turning to directing, Lucidi had only directed one film prior to My Name is Pecos. But because of his background in editing, there’s a pace and an energy to the movie that makes it one of the more frenetic outings in the genre. Yes, it seems very weird for a white American actor to play the Mexican Pecos; the genre already employed several actual Hispanic actors. Nevertheless, Lucidi imbues Pecos with all of the audience’s sympathies and as he edges closer to his intended target, we can’t help but cheer him on.

Other than Fulci, the director I was the most familiar with is Massimo Dallamano. Though he only directed 12 movies before his untimely death, Dallamano made a stamp in the giallo and poliziottescho genres. (I’ve previously written about both What Have They Done to Solange? and his final film,  Colt 38 Special Squad.) And while 1967’s Bandidos is his only western as director, Dallamano was the cinematographer on both of Sergio Leone’s first two storied Dollars films.

Bandidos is a fascinating outing, just as much a tragedy as a revenge western. Enrico Maria Salerno plays Richard Martin, an arrogant sharpshooter who begins the movie as a passenger on a train. Unfortunately, the bandit Billy Kane (Venantino Venantini) and his gang hijack the train. Kane is Martin’s former student, and out of sheer sadism, the villain shoots Martin’s hands, leaving him unable to wield a gun. Just for good measure, he slaughters every other person on the train. 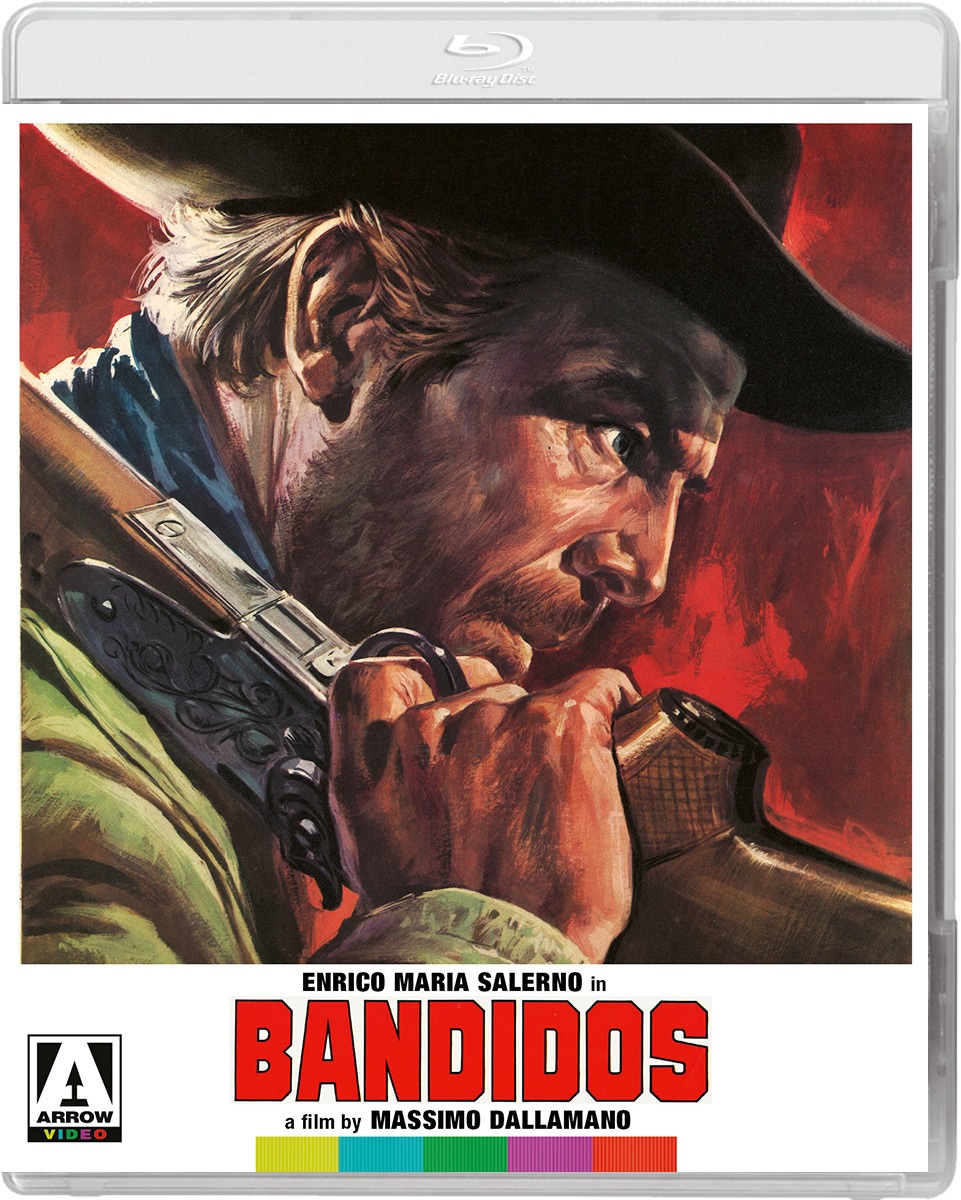 Years later, Martin has resorted to making money as a traveling huckster. He becomes an alcoholic, deep in despair and self-loathing. Fortune smiles when he meets a young man named Ricky Shot (Terry Jenkins), who was falsely imprisoned for Kane’s crimes. Martin takes Ricky under his wing, teaching him the ways of the sharpshooter, so they can both take revenge.

I cannot express how much I love Bandidos; it might be my favorite in this set. It has a grandeur and scope most of these others don’t possess, but the story is very personal. Salerno’s Martin displays such deep sadness at the loss of his livelihood and self-respect, totally helpless in his own eyes. It’s also rare for the aging mentor figure to be the central character, and with that comes a maturity a lot of Italian westerns lack.

Finally, we come to Antonio Margheriti’s And God Said to Cain, a late addition to the cycle. By 1970, the Italian Western had largely become a parody of itself. However, Cain, with its obvious biblical allusions, is deathly serious, and in fact skirts the line between western and another popular Italian movie genre, the Gothic. Margheriti was a veteran of the Italian Gothic cycle, a contemporary of the likes of Mario Bava. While I usually feel that his Gothic films pale when compared to Bava, here they imbue a sense of menace and foreboding that frankly makes the picture.

German actor and known real-life piece of shit Klaus Kinski stars as Gary Hamilton, a former army officer sent to prison for armed robbery. But here’s the thing; he didn’t actually commit this crime. It was in fact his friend Acombar (Peter Carsten) who planted evidence against Hamilton to frame him. After 10 years of hard labor, Hamilton gets parole and returns to his hometown, determined to get revenge on Acombar and his whole family, who are now wealthy landowners thanks to the money from the robbery. 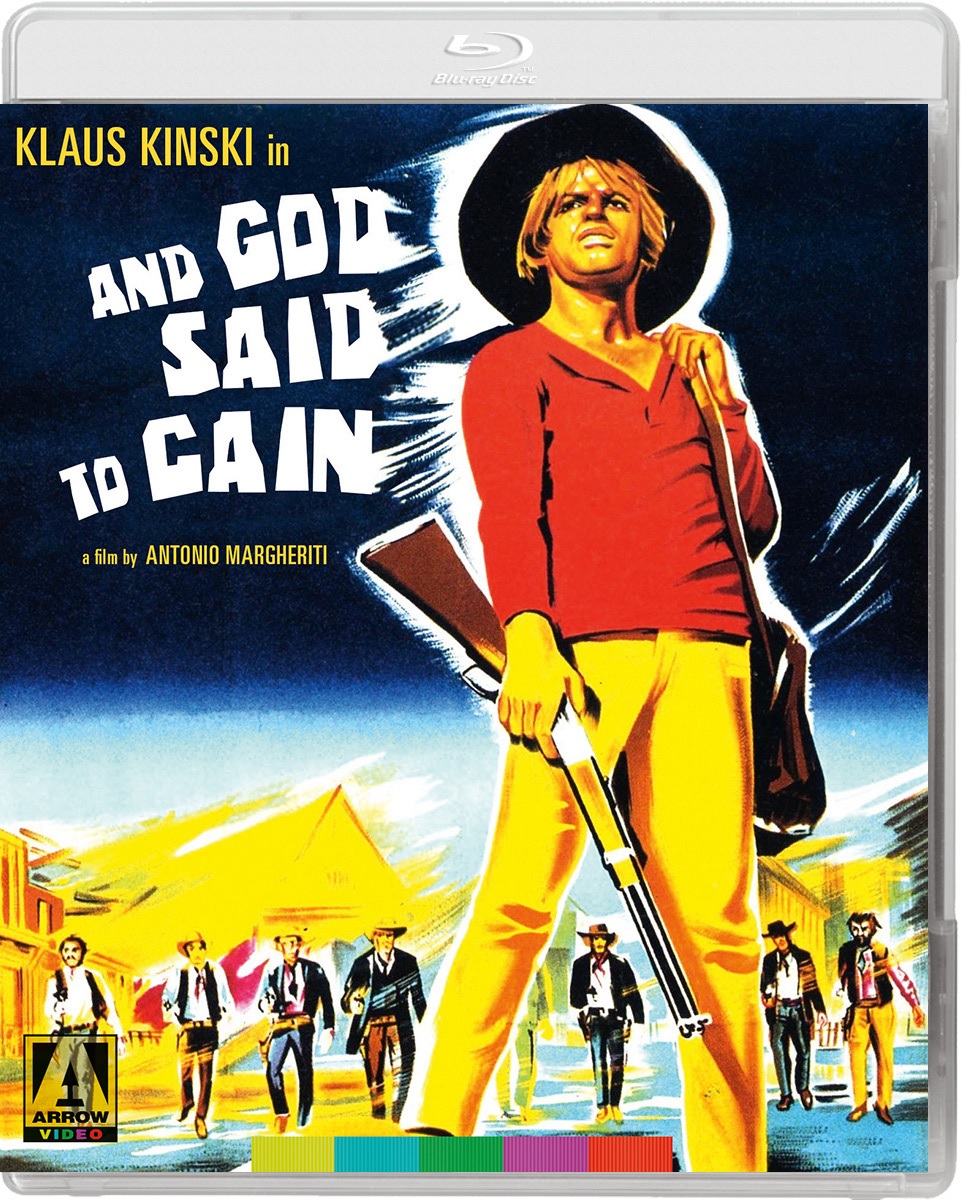 What makes And God Said to Cain stand out is just how close the execution hews to horror. Hamilton feels like a wraith or slasher movie villain. He’s always in the shadows, prepared to pick off another member of the Acombar gang. Most of the events of the movie also take place in the span of one night, in a single location (the small town and specifically the casino/hotel). In addition, a great deal of the movie features handheld photography. These elements give a more immediate, and often quite chilling, feel to the events.

The ultimate result is a revenge movie where, even though we know Hamilton is the wronged party and he technically deserves his vengeance, he comes across much more like the aggressor. He is the monster out to destroy a whole town of “upstanding” citizens. Worth nothing, the wrong he has suffered is far less dramatic than the other protagonists mentioned above. Naturally nobody wants to work on a chain gang for 10 years, especially not when you’re innocent; but his retribution feels a bit overboard, which is why the movie works so well as horror. 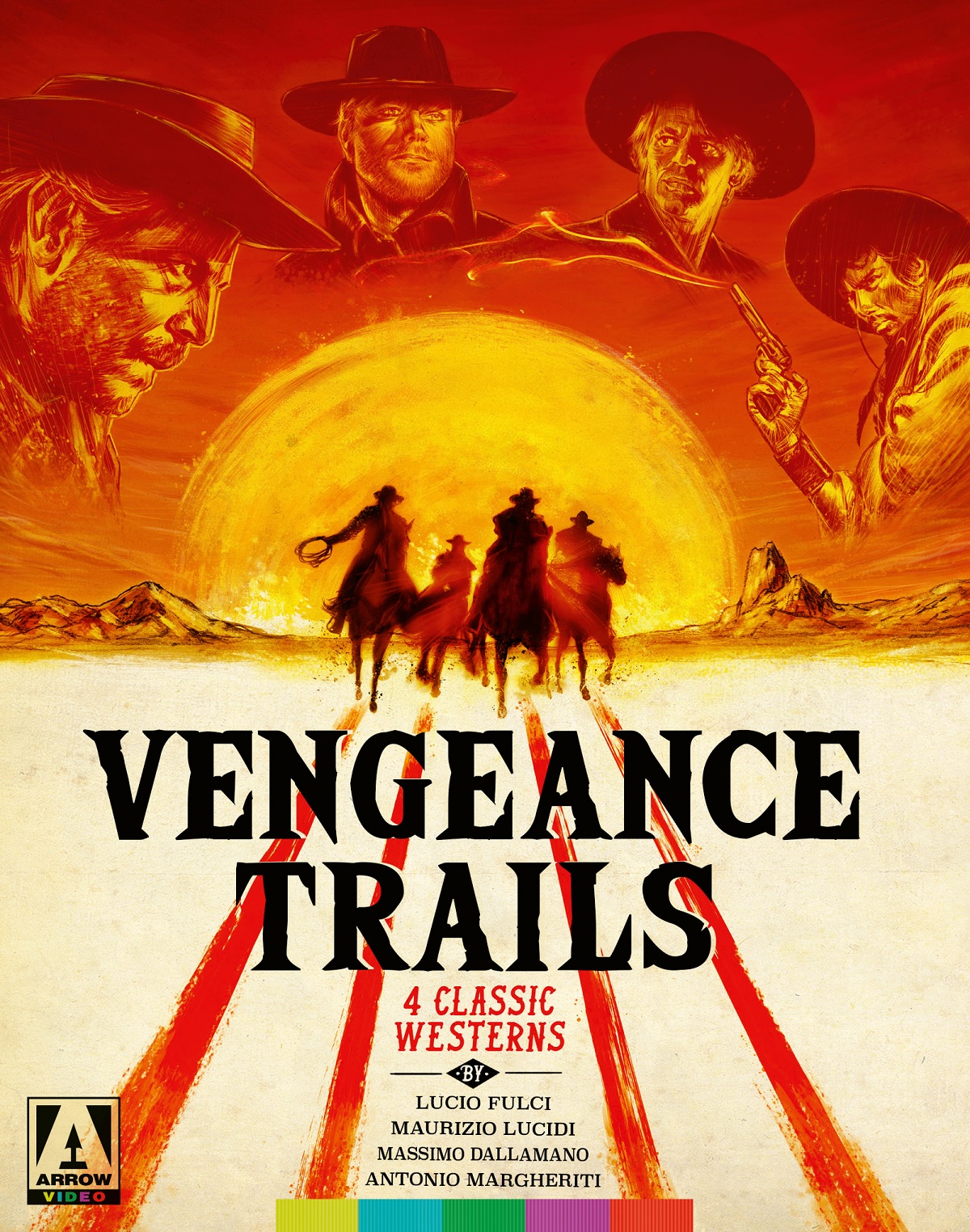 I was very surprised by this box set. Even though I’d seen two of the movies previously, watching them in close succession really illustrated how different a revenge movie can be. At times I forgot these were all variations on a theme and instead I got lost in the wildly different visions from the filmmakers. The box set’s beautiful and informative booklet offered several thought provoking essays on the topic and the films. Is the dogged pursuit of revenge worth the lives it takes to get there. Some of these movies think yes; others are less sure.

None of these movies have been widely available in the U.S. but I’m very glad Arrow has graced us with beautiful restorations. Now, in the blazing heat of the summer, is the perfect time to see what the sweaty, teeth-gnashing version of a revenge tale should look like.