FOR A FEW DOLLARS MORE is the Best Western Ever Made

When someone asks me what my favorite movie of all time is, I have the usual hemming and hawing response about how hard it is to say. But if pressed, I say it’s Sergio Leone’s 1966 epic masterpiece The Good, the Bad, and the Ugly, a movie that transcends both the spaghetti western and the action film as a whole to become a symphony of bravura and bravado. I truly love it…but I might have to say the better western, the truly greatest western ever made, might be its direct predecessor, 1965’s, For a Few Dollars More.

Italian director Leone–working under the Americanized name of Bob Robertson–directed the small-budgeted A Fistful of Dollars in 1964, starring American TV cowboy actor Clint Eastwood. The movie made a boatload of money in Europe and the following year, Leone was able to direct a second film with Eastwood, with a much larger budget and using his own name. Where Fistful was based on Akira Kurosawa‘s Yojimbo and stuck very close to that store, Leone and his writers were able to forge a completely new story, and with it came the now-iconic portrayals of tough guys for which the Italian Western is universally hailed. 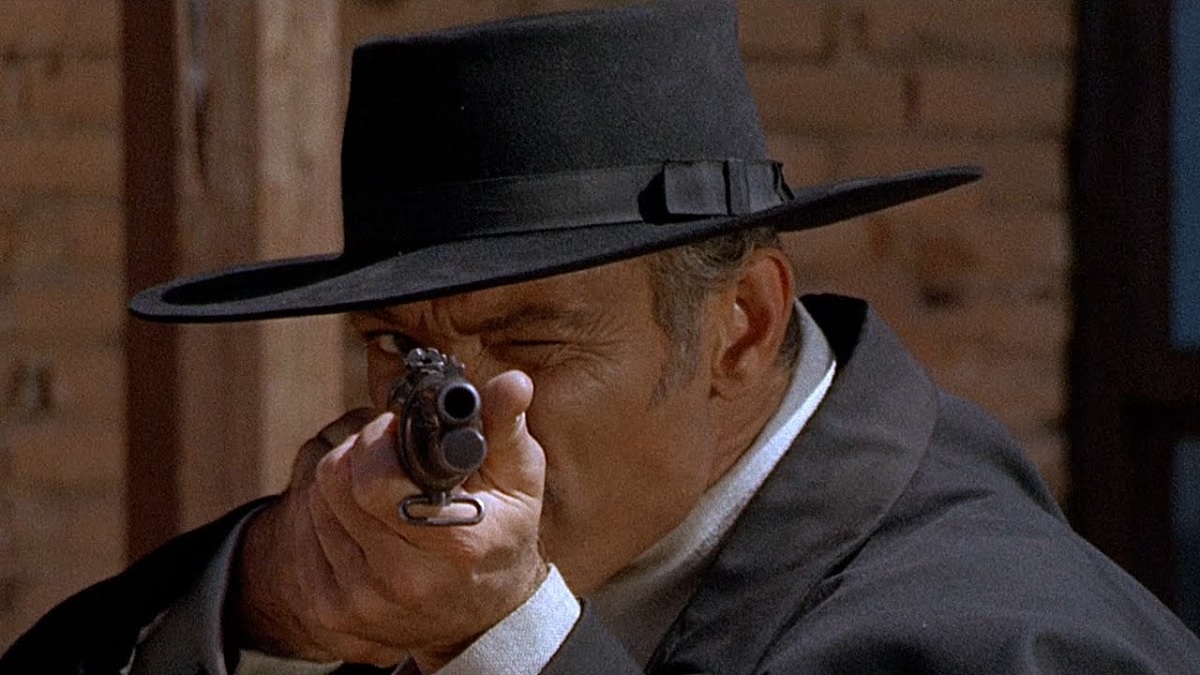 One of Leone’s innovations for For a Few Dollars More was to create his now infamous triangle of lead characters, which he’d refine in Good/Bad/Ugly (of course) and Once Upon a Time in the West. Eastwood–now a huge star–put on his tattered serape and hat to portray Monco, a young “bounty killer” who outsmarts and outguns anyone. He’s put opposite the steely eyed Lee Van Cleef as the aging bounty killer, Col. Douglas Mortimer, who’s smart in a different way to Monco, using gadgetry and trick weapons to get his prey.

In the pair of heroes, neither sure of the other, Leone offers a kind of a proto-buddy cop movie. The entire opening ten minutes shows Mortimer on the trail of an outlaw with a price on his head so we get to know him, and that’s followed immediately by a further ten minutes showing Monco’s brand of more in-your-face outlaw chasing. When they finally meet and realize they’re after the same bounty, we get a prolonged show of machismo, where neither wants to kill the other necessarily. Monco shows off his skill with a pistol, while Mortimer is able to patiently wait to show off his skill with a ranged weapon. It’s a near-wordless exchange which sees both men with hats full of bullet holes by the end. 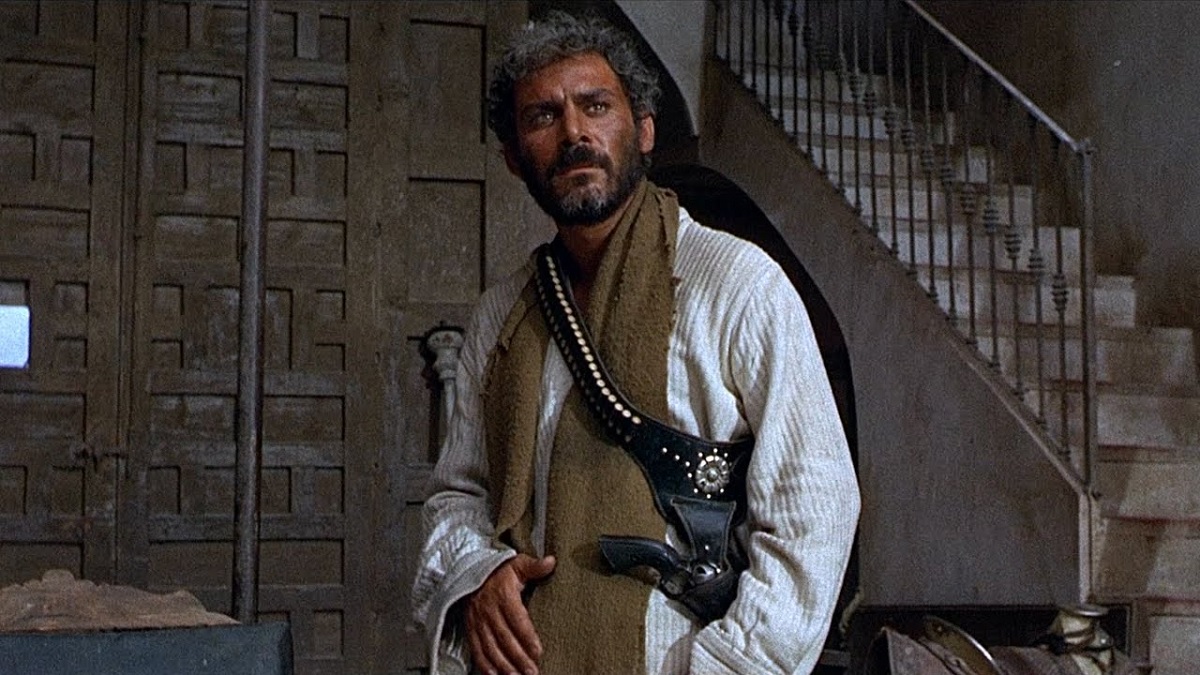 But I mentioned a character trio, and the third prong of that trifecta would have to be pretty strong to offset a pair of icons like this. And he is; easily the film’s most bombastic character is the bandit leader, El Indio, played by Gian Maria Volonté, who’d portrayed the bad guy in Fistful as well. A cackling psychopath, Indio is a western version of Gotham City’s Joker, killing his own men and changing his plans on a whim. And he’s shown smoking marijuana to calm the demons in his mind, while whirring electric drones of Ennio Morricone’s score echo on the soundtrack.

Morricone wrote only about 17 minutes of original music for the film, but like Peter and the Wolf, he assigns a different musical instrument and motif to each of the characters. Monco has a high whistle of a piccolo, referencing the operatic whistling of the movie’s main theme and indeed Eastwood’s theme in Fistful. Mortimer’s trademark sound is a twang of a jaw harp, always used to accentuate his narrow-eyed efficiency and the inherent humor of someone being that good at his job. Finally, Indio, whose musical cue is a quick, low strum of a Spanish guitar, underscoring his omnipresent menace. 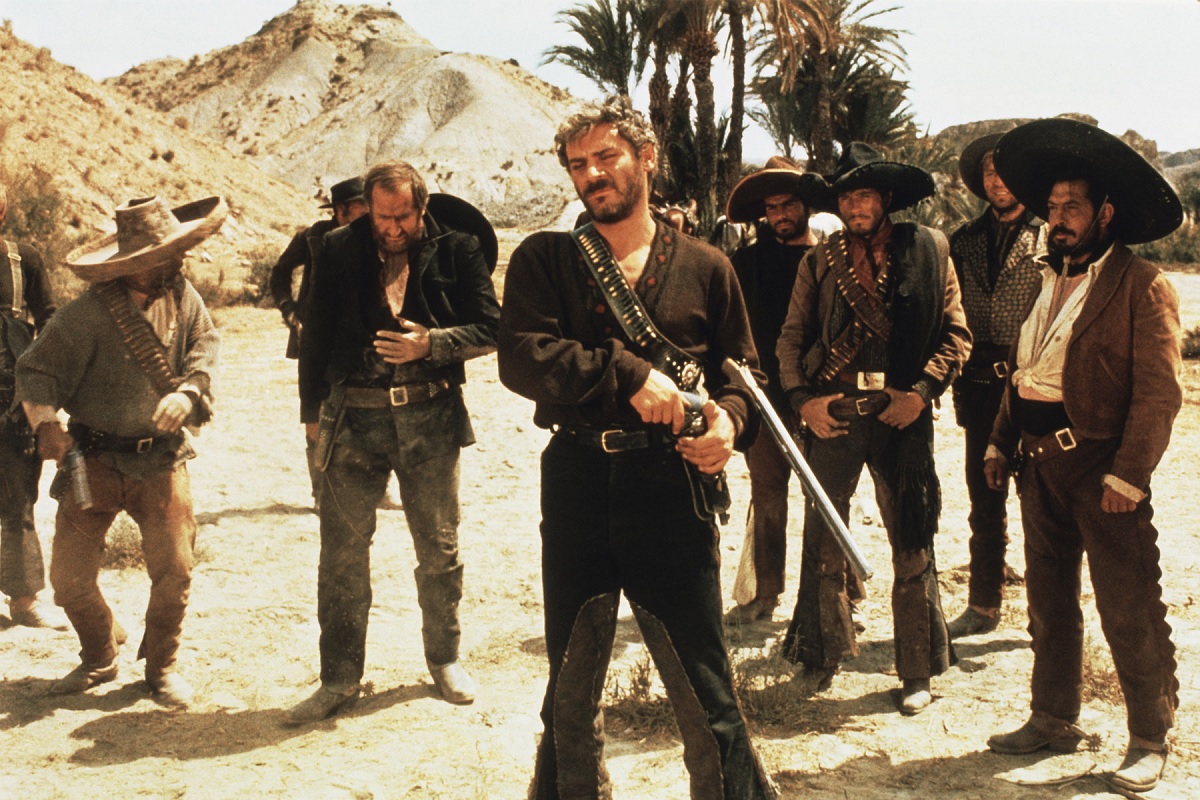 It’s also through Indio that we get most of the film’s plot. After a daring prison escape early in the movie, he takes up with his old gang to rob the heavily guarded safe in the Bank of El Paso. In order for the uneasy partnership of Monco and Mortimer to work–with tens of thousands of Old West dollars in the balance–they’ll have to infiltrate the gang, but that leads to the most fascinating part of the film, that involving pocket watches, chimes, and a strange flashback.

Indio has a pocket watch that we first see in a scene where he’s murdered a man’s family simply to make the man angry and desperate enough to duel him. The watch plays a haunting chime and once the chime finishes, they draw. Following Indio’s easy victory, he tokes up and we see the first in a series of flashbacks depicting a much younger Indio looking into the bedroom window of a man and a woman. The woman has given her man a gift of a pocket watch. Later on, as the story progresses, we see more of this flashback, which involves Indio killing the man and attempting to rape the woman. We won’t know for almost the entire run of the film, but this ties directly into Mortimer and his dogged pursuit of Indio.

With a plot as well structured as this, and lead characters as compelling and well-drawn as this, Leone is then able to stage some of the finest action and suspense set pieces of the genre. Leone’s westerns are all about delaying the moment of violence, ramping up the tension like a coiled spring until it inevitably explodes. One amazing sequence has Indio’s gang casing the bank while Monco and Mortimer each watch from separate vantage points. They count how long it takes for the bank’s guards to walk around the building. The scene cuts around from giant faces in the foreground and the tiny guards in the background, until finally they use dynamite to steal the safe itself and ride off. 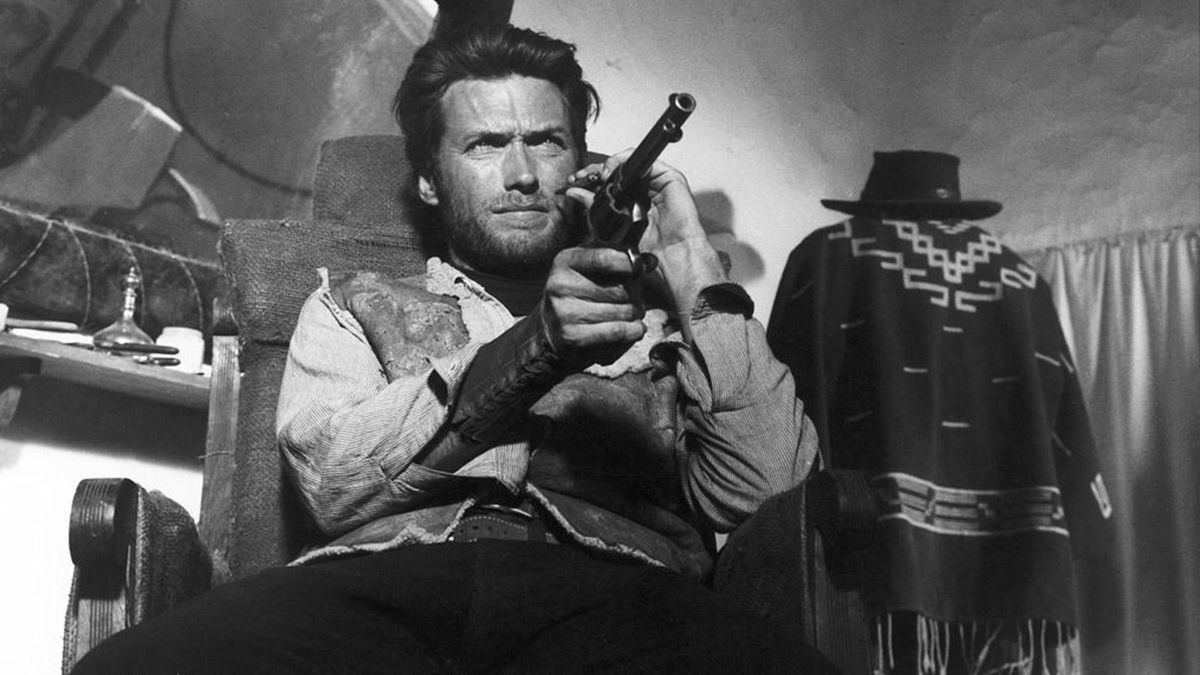 It wouldn’t be a western without duels and For a Few Dollars More has them to spare. The entire ending of the movie finds our heroes, having escaped torture at the hands of Indio’s men, engaging in a prolonged shootout with the gang members in the deserted Mexican town of Agua Caliente. It’s two against a million and the hunters take it in turns to save one another and clean up the town, as it were. One infamous moment sees a pair of bandits burst in on Monco and open fire, only for Monco to turn around in a swiveling chair, revealing he’d perched his hat and poncho as a decoy to get the drop. 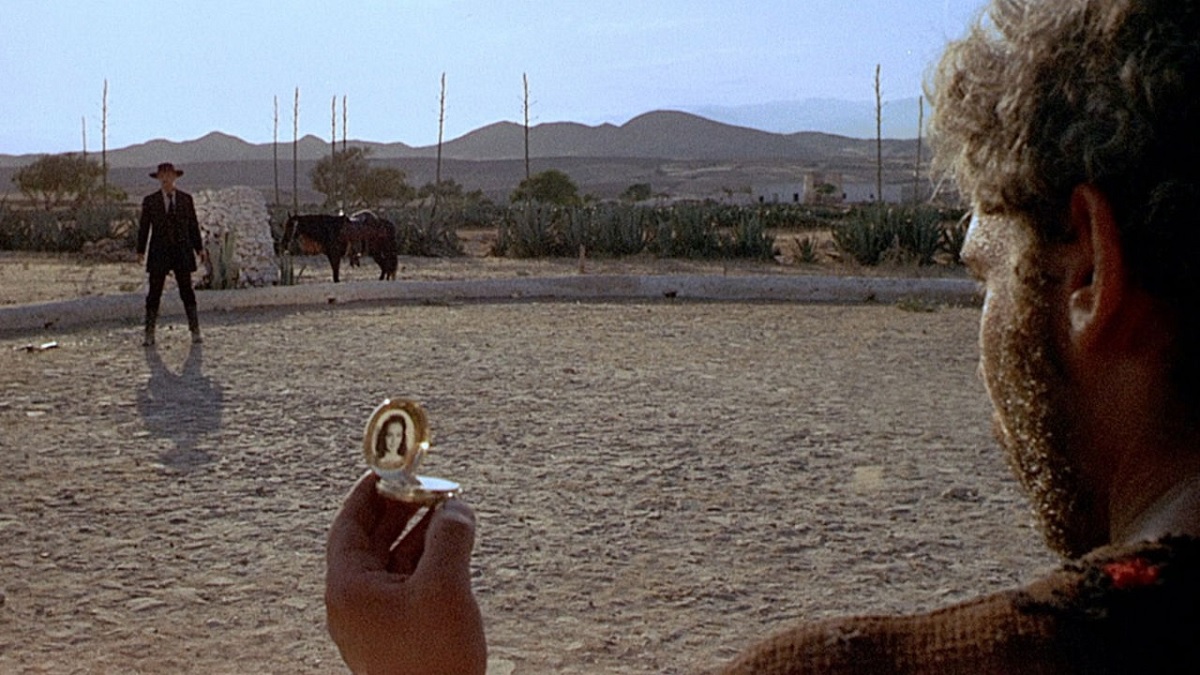 The movie ends with Mortimer calling out Indio for the final duel, but Mortimer’s gun has been shot out of his hand, meaning Indio has the advantage. Gleefully he begins his pocket watch chime and Mortimer seems sunk, until Monco brings up a second pocket watch and a rifle. Walking over to Mortimer, he gives his tenuous partner his pistol. This may be the final duel between Mortimer and Indio, but Monco is there to referee, to make sure the better man wins fair and square. 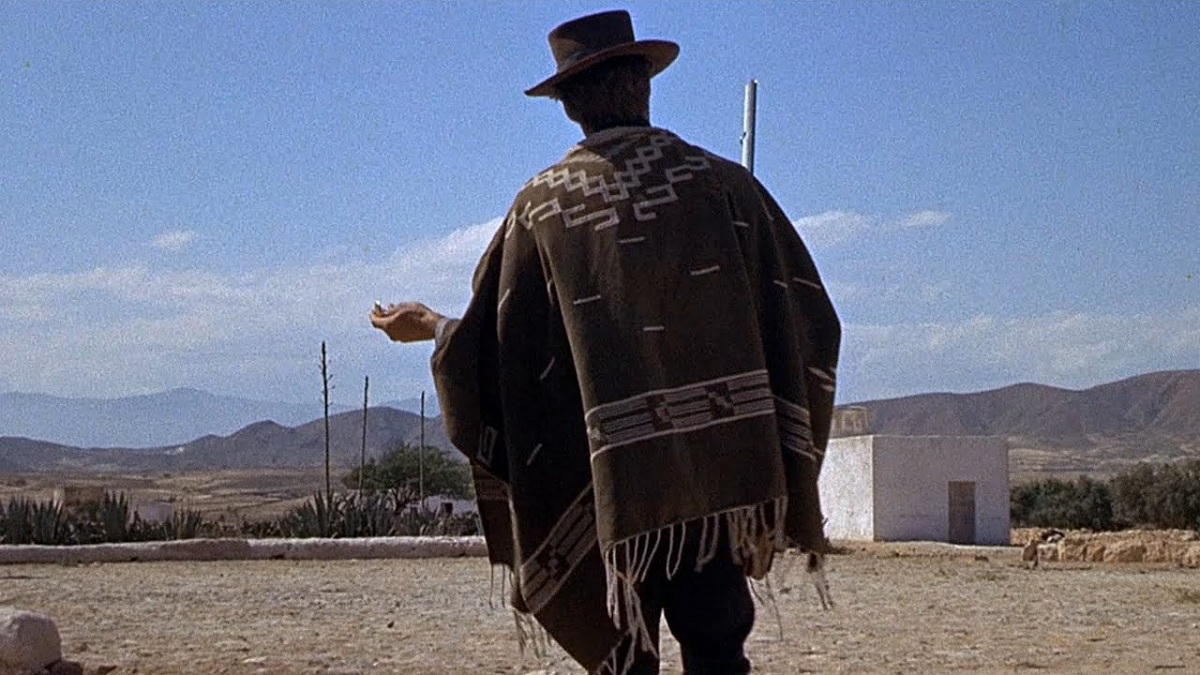 For a Few Dollars More revolutionized not only the European western but the American one as well. Following it, and Leone’s subsequent movies, Hollywood westerns got a lot more violent, a lot more winky, and some even directly “homaged” their Italian counterparts. While Leone would make true epic masterpieces with The Good, the Bad, and the Ugly and Once Upon a Time in the West, they’re languid in their loftiness at times. For a Few Dollars More is cut to the bone in its plot, straight forward with its characters, and always exciting in its action. And it’s still the most financially successful Italian western ever made. 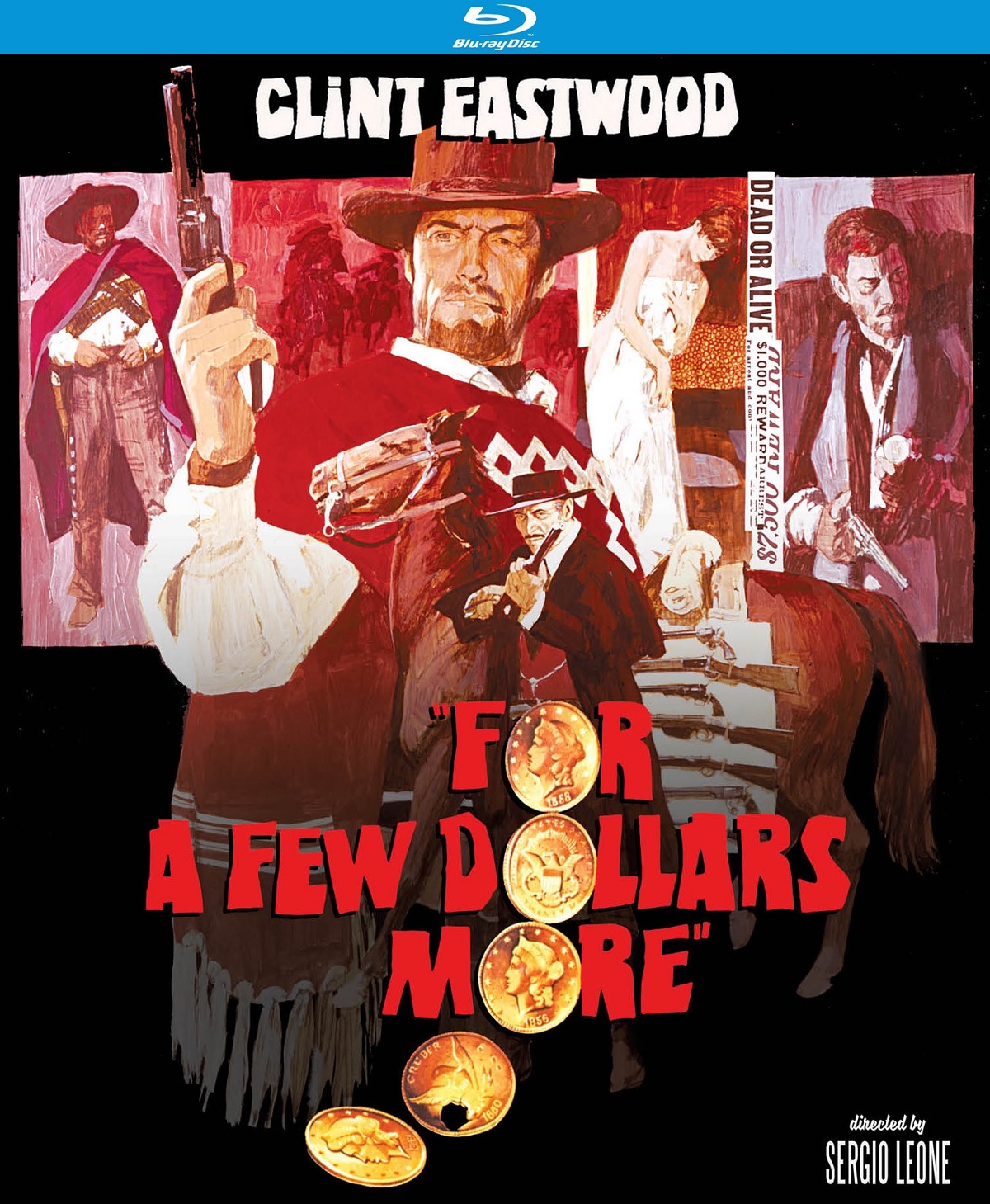 Kino Lorber is releasing a beautiful 4K restoration of the film on Blu-ray on March 26. It includes both the uncut International release version and the original American release version. The release also features hours and hours of supplemental material in the form of interviews and featurettes, as well as two commentary tracks, one by Leone’s biographer, Sir Christopher Frayling, and the other a new one by the excellent film historian Tim Lucas.