There had been westerns made in the American style in Europe since nearly the beginning of cinema, but it wasn’t until the success of Sergio Leone’s A Fistful of Dollars that Italian filmmakers realized they could make westerns in their own, highly stylized fashion.

After Fistful, the Italian western floodgates opened and hundreds poured into cinemas between 1965 and 1975, roughly. And with them came ubiquitous heroes with names like Ringo, Django, and Sabata. But one you might not have heard of is Sartana, and there’s a reason for that we’ll get to; the Sartana movies, however, are excellent, and now all five “official” films in the series are available in a snazzy Blu-ray set from Arrow Video.

In Italy and the European market, there wasn’t such thing as “Intellectual Property,” meaning if they wanted to, a distributor could call a movie whatever they wanted to, mostly done to capitalize on another movie or franchise’s popularity. This happened with Ringo and Django, both of whom were characters used in a million other movies, even if they weren’t intended to be initially. But Sartana was different: Sartana’s popularity remained singular, thanks in no small part to the efforts of the lead actor.

In 1967, a movie was made in Italy called Mille dollari sul nero (released over here as Blood at Sundown) which featured a bad guy named Sartana, played by actor Gianni Garko. This movie became such a hit, and Garko’s performance became so popular, that the movie was even released in Germany as Sartana. The following year, they decided to give Garko a starring role as the hero, an unrelated character named Sartana, and it too was a monster hit. So Garko, being the smart fellow he was, went to court to protect the character–his visage, dress, and overall demeanor–as being his sole property and persona. And it worked! While other movies got labelled Sartana, only the five in this set are the canonical ones, and Garko doesn’t even play Sartana in all of them. Sartana as depicted in these movies is something like a western James Bond mixed with Batman or something. He’s always impeccably dressed, in fancy black clothes with a red tie, looking a bit like a high stakes gambler. He’s got gadgets and trick weapons but is also highly intelligent and is essentially a detective through most of the movies. Like a wraith for righteousness, he comes into various towns to unravel dastardly plots and make himself a boatload of money in the process. The plots are usually exceedingly complex, owing in no small part to the writers being giallo or mystery writers elsewhere in their career. In short, Sartana is a total badass. 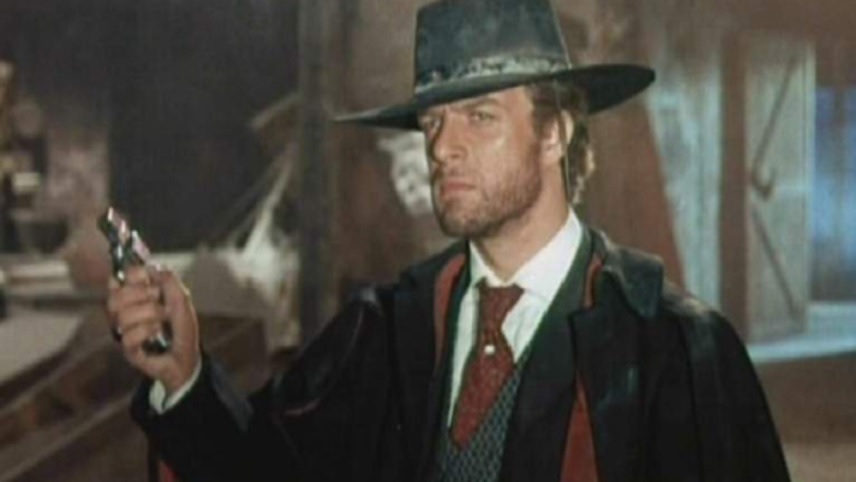 The first movie in the series was directed by Gianfranco Parolini, going by the Anglicized name of Frank Kramer (who left this series to direct his own Sabata trilogy), and the latter four were directed by Giuliano Carnimeo, credited as Anthony Ascott. Garko played Sartana in the first two and last two movies, while the middle film featured a Sartana played–with the okay from Garko–by another western star, George Hilton. And each of the movies has a phenomenally ridiculous title:

So you can certainly sense a theme here. Sartana kills people a lot, and the reference to him as the Angel of Death is an apt one. He always seems to swoop in at the beginning of the narrative in time to start setting the pieces up for the villains and watch them fall. He doesn’t always save the good guys, but he always leaves the baddies in utter shambles.

The first movie has Sartana insinuate himself in the plot of several corrupt members of a town, and a couple of rival gang leaders as well, played by spaghetti western staples Klaus Kinski and William Berger. While fun, If You Meet Sartana is probably the weakest of the bunch. The second film feels a little more self-assured, with Carnimeo’s showier, more frenetic direction. In this one, a gang commits a bank robbery and one of them impersonates Sartana, leading the corrupt authorities to put a bounty on the famous gunman’s head. Bounty hunters from all over come to track down Sartana, who has to uncover the real culprits and prove his innocence. The bounty hunters are all unique and fun, and they include Kinski again, here playing the perpetually unlucky Hot Dead.

Both of the first two Sartana movies set up the iconic nature of the character while still being fairly by-the-numbers Italian westerns. With the next three, however, the stories would become much more complex and Sartana himself begins to appear more like an agent of retribution rather than a smiling, twinkly-eyed trickster. Trade Your Guns for a Coffin is the lone Sartana outing for George Hilton, who by his own admission wanted to play the character as more of a romantic if enigmatic figure. In the movie, Sartana is a bounty hunter who gets ambushed by a gang of banditos just as he’s about to catch his prey, a man riding shotgun on a wagon full of gold. Except, as he soon finds out, the wagon contained only sand and the whole thing was a set up by a land owner who wanted the gold for himself. And as he sets up the bandits to take down the landowner, Sartana also has to contend with a greedy saloon owner (played by giallo staple Erika Blanc) and a rival bounty hunter named Sabbath (Charles Southwood, yes, the actor’s real name). Hilton does an admirable job in the role, but the plot is particularly naff and isn’t quite as successful. Garko returned to the role, now sporting a huge blond mustache, and gave the series easily its two best entries. In Have a Good Funeral, Sartana witnesses a massacre and takes it upon himself to investigate. He’s sure the massacre had to do with the daughter of a friend of his, now entitled to a great deal of land, but he’s not sure who of the town’s many shady businessmen are behind it. Maybe all of them. And in Light the Fuse, Sartana comes to the aid of a former associate, wrongly imprisoned for his knowledge of a nearby gold mine. Corrupt lawmen and gangs of bandits descend, and Sartana has to sort out the mess. Also he plays a giant pipe organ in the middle of the town square that becomes a machine gun, soooooo…. Garko is in incredible form with these two movies, and Carnimeo’s direction was never better. There’s something almost supernatural about Sartana in the films; he’s too good to just be a roving do-gooder, and always seems to be exactly in the right place at the right time, just exactly what you want from a mythic western hero.

As with all of Arrow’s sets, the care and attention to detail for the Complete Sartana is second to none. Arrow oversaw beautiful 2K restorations of each of the movies, the first from existing film elements and the other four from the original camera negative. I’d seen some of these movies years ago on a bargain basement spaghetti western DVD set, and it’s night and day. There’s care here given to a genre that’s often mistreated by home media distributors.

This isn’t the kind of thing where one of the discs have a lot of extras and the others just have the movie. Each of the movies contains a bevy of extras. If You Meet Sartana contains a brand new commentary track by German filmmaker Mike Siegel, which Your Angel of Death and Have a Good Funeral contain brand new commentaries by writers/authors C. Courtney Joyner and Henry Parke. The latter two are featured on a number of spaghetti western commentaries and know a huge amount about the genre, and Siegel’s is a fascinating commentary from the West German perspective, where Sartana was an icon.

We’ve also got interviews with directors Parolini and Carnimeo, writers Ernesto Gastaldi and Fabbio Piccioni, and a number of the film’s main actors, including Gianni Garko, George Hilton, and Erika Blanc.

The Complete Sartana is one of the best box sets Arrow have put out recently, and that’s saying something. They continue to impress, and showcase movies that wouldn’t otherwise get the royal treatment.