YEARS OF LEAD Explores Crime and Corruption in ’70s Italy

Post-fascism, Italy became the coolest place in the world. Fashion was king, style was everywhere, and their motion picture industry was booming. While directors like Fellini and Antonioni won favor with the arthouse crowd, dozens more made a career out of chasing Hollywood trends. They made them their own. Italian westerns are perhaps the most famous, followed by the giallo and horror booms. But another such cycle of movies that reflected both a specific cinematic tradition and a localized Italian moment is the poliziotteschi, or crime movie.

Seemingly borne out of American cop movies like Bullitt and Dirty Harry, poliziotteschi became a supremely introspective look at the real-life uptick in crime, corruption, and violence in Italy. Arrow Video commemorated this unique cycle with a new box set, titled Years of Lead. This title derives from a specific period of political and social upheaval in Italy from the late-1960s to the late-1980s. Resurgence of both far-right and far-left extremism marked the real Years of Lead. All of that manifested in terrorism, major crimes, and political corruption.

I’ve written recently about a specific poliziottesco of this period, Sergio Martino’s fascinating and troubling Silent Action. In that piece, I spoke about the often militaristic, fascist-leaning supercop at the heart of most of the genre. That kind of hero in American movies started out of somewhere dark in the ’70s and became a cartoon character of machismo in the ’80s. However, as the box set explores, the “supercop” in Italy was less a propagation of macho stereotypes and more a reaction to a seemingly losing battle on all sides. 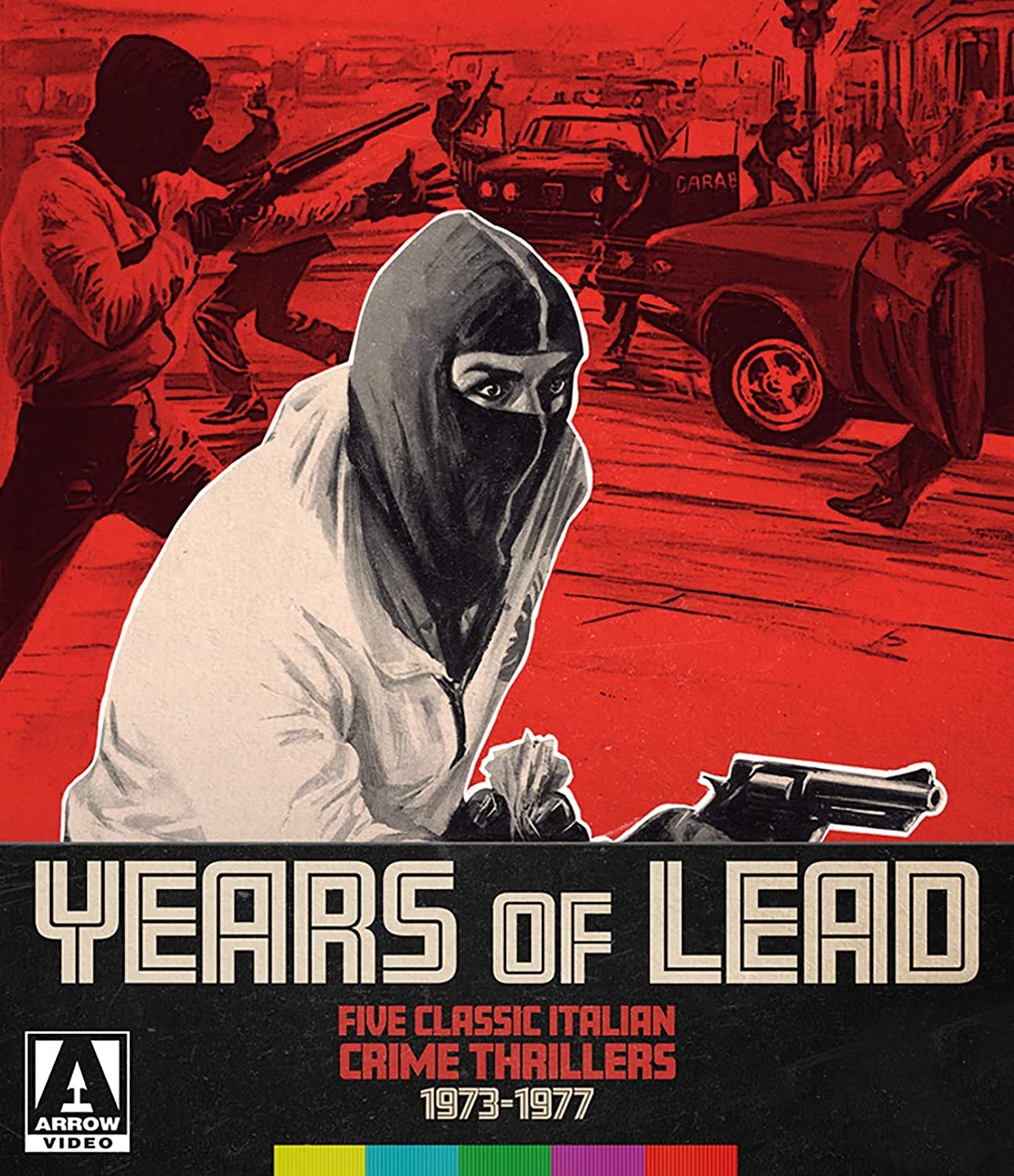 The five films in the Years of Lead box set aren’t titles you’d expect at the top of any “most popular” lists of the genre. However, they each exemplify a different aspect inherent to the poliziottesco that make it stand apart. The cycle had different moods, if you will.

The first two films in the set represent a vein of poliziotteschi that is perhaps the least “fun” of the bunch. Thrill-seeking, bored middle- or upper-class people who commit increasingly heinous acts because they can.

Savage Three (1975) features three young men working mid-level positions at a computer company. The leader, Ovidio (Joe Dallesandro), has a loveless marriage. He sees himself as a toothless cog in the wheel of his own life. Ovidio and his friends begin embarking on a series of violent criminal acts, including murder and sexual assault. Throughout their crime spree, the three men return to work seemingly as a means to re-justify their murderous acts; the world shits on them, so they deserve to take it down.

Though the film is very much from the point of view of Ovidio, Savage Three also has an “Ahab” character, an antagonist of sorts on the right side of the law. Here it’s Inspector Santagà (Enrico Maria Salerno, brother of the film’s director Vittorio Salerno). He has a Columbo quality about him, shabby and a bit scatterbrained. At least on the surface. He seems to know immediately that Ovidio is guilty but spends the bulk of the movie trying to prove it. Along the way, he has wry conversations about society and the place of men within it. It reminds me a bit of the scenes between Christian Bale and Willem Defoe in American Psycho. 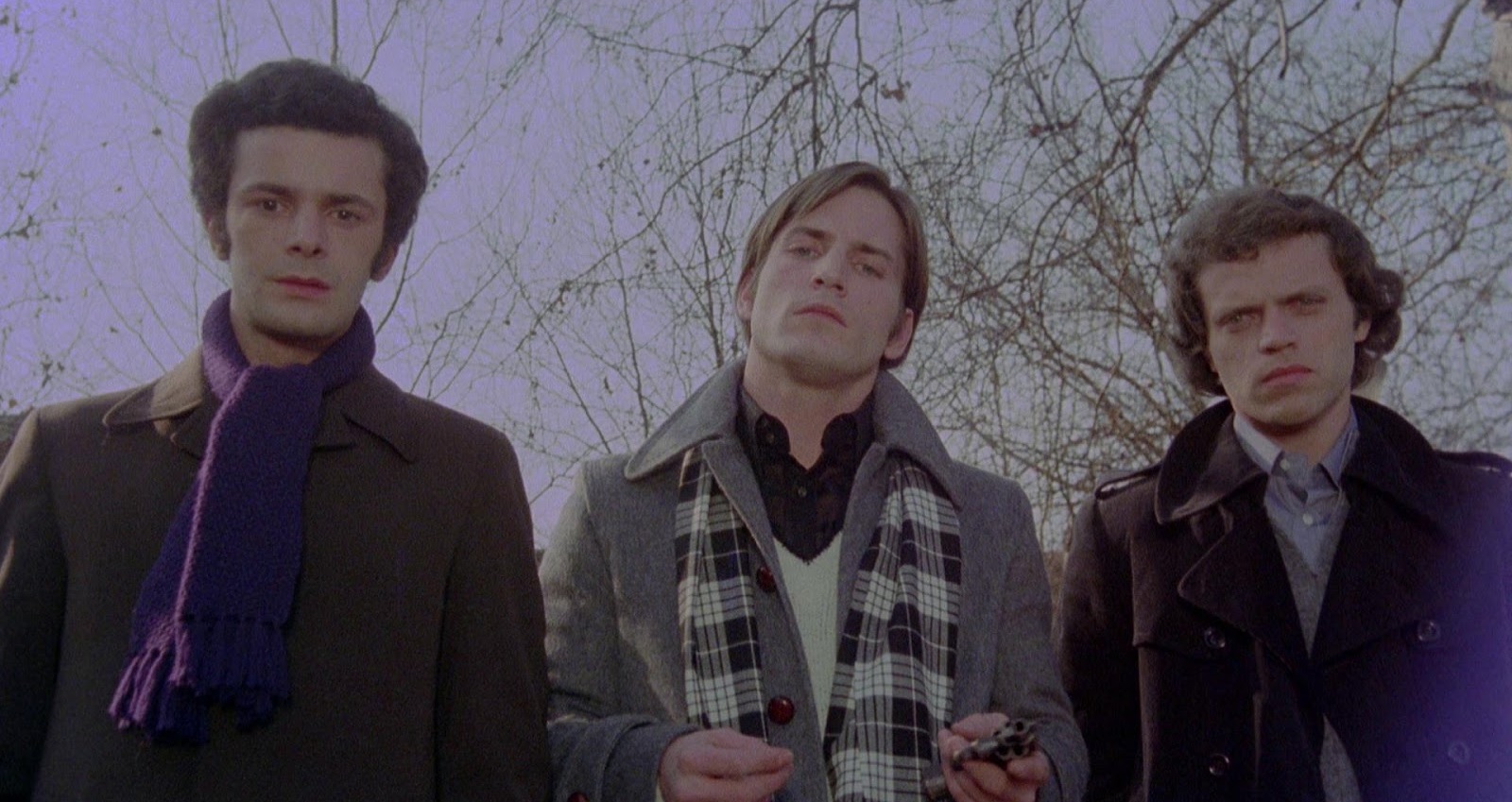 While the atrocities the men carry out are horrendous, director Salerno and his co-writer, the great Ernesto Gastaldi, keep the story purely about the psychology behind them. They kill because they can, and they want to. And because, to them, modern Italian life has forgotten them, which ultimately makes the movie a success.

However, I cannot say the same for Like Rabid Dogs (1976). This film likewise focuses on a trio of spree-killers, this time two men and a woman. All of them are the children of old-money and are simply bored and sadistic. They engage in a series of extended kidnapping, torture, and murder sequences of prostitutes in the area. The police are on their heels, but it naturally takes the entirety of the movie for any sort of comeuppance.

This one didn’t work for me, largely because it lacks the cleverness and the social commentary, and indeed the filmmaking prowess, of Savage Three. The real-life Circeo Massacre inspired the film. Director Mario Imperioli doesn’t shy away from depicting the depravities, and the laughing joy, of the murderers. It is shocking, but ultimately just feels sensationalistic. 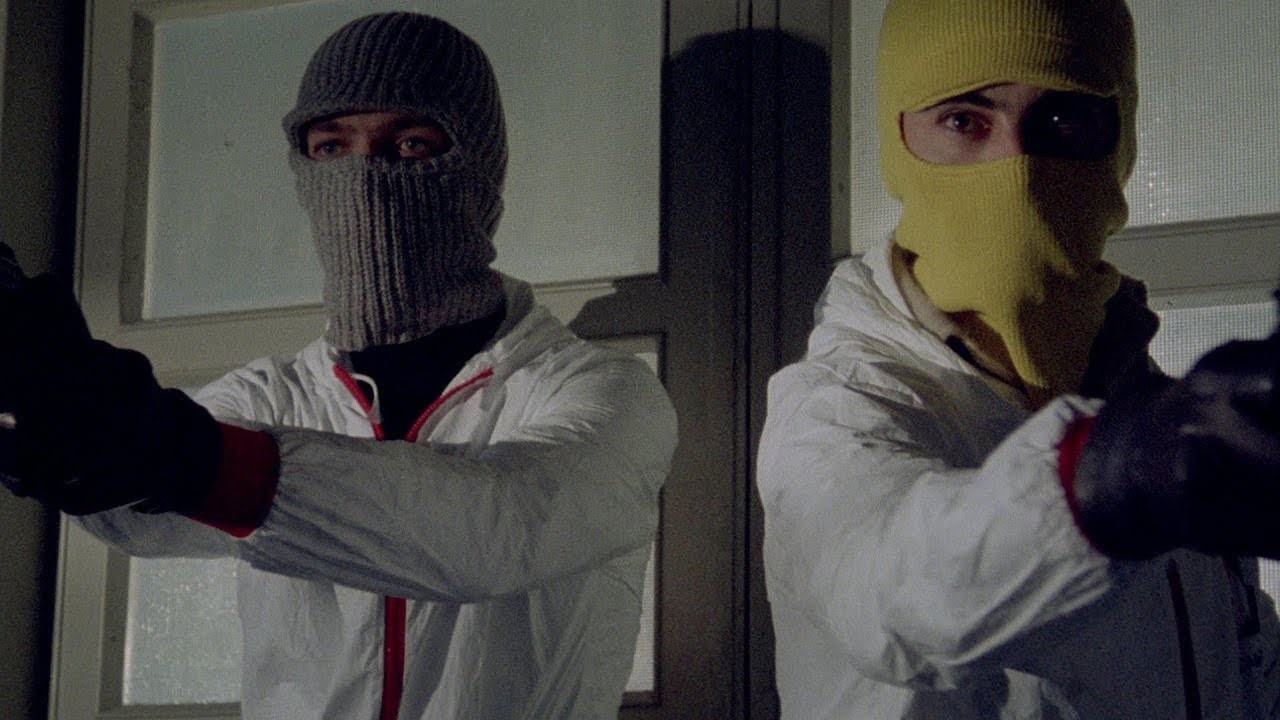 Despite not enjoying it, I will say that Like Rabid Dogs does a great job at showcasing this specific kind of poliziottesco. Unmotivated, sadistic crime was one of the many kinds on the rise during the Years of Lead. The police, here a seemingly ineffectual lot, can’t come to grips with senseless crimes such as these.

Which leads nicely into our next film, Colt 38: Special Squad (1976), a movie all about the police looking for any means to “take back” the city. This movie especially feels indebted to the Dirty Harry films, specifically the second, Magnum Force. A vile Marseillaise gangster (Ivan Rassimov) assassinates the wife of Turin police captain Vanni (Marcel Boffuzzi) as retribution for the death of his brother. Completely wracked with anger and guilt, Vanni puts together a team of young motorcycle cops. He gives each an unregistered Colt 38 Diamondback revolver in order to hit the criminals where it hurts.

Clearly this sounds like any of the various “supercop” styles of crime movie of the era, but writer-director Massimo Dallamano, while also giving audiences plenty of action, shows the inherent problem with giving cops so much power. The Marseillaise, an excellent supervillain-esque antagonist, begins upping the severity of the crimes in an effort to beat the vigilante police. Eventually, Turin becomes a war zone, its innocent citizens collateral damage. Ultimately, it’s not about ending crime. It’s a pissing contest between a cop and an assassin and nobody gets away unscathed.

Easily the lightest movie in the set, we next turn our attention to Highway Racer (1977), one of the most fun action flicks I’ve seen in a while. A team of daring bank robbers led by a suave Frenchman (Angelo Infanti) make daring getaways in their suped-up sports cars. A veteran police captain (Giancarlo Sbragia), once one of the best drivers in Rome, decides to catch the robbers by modifying an old Ferrari and using a hothead young cop (Maurizio Merli) to infiltrate the gang and take them down. 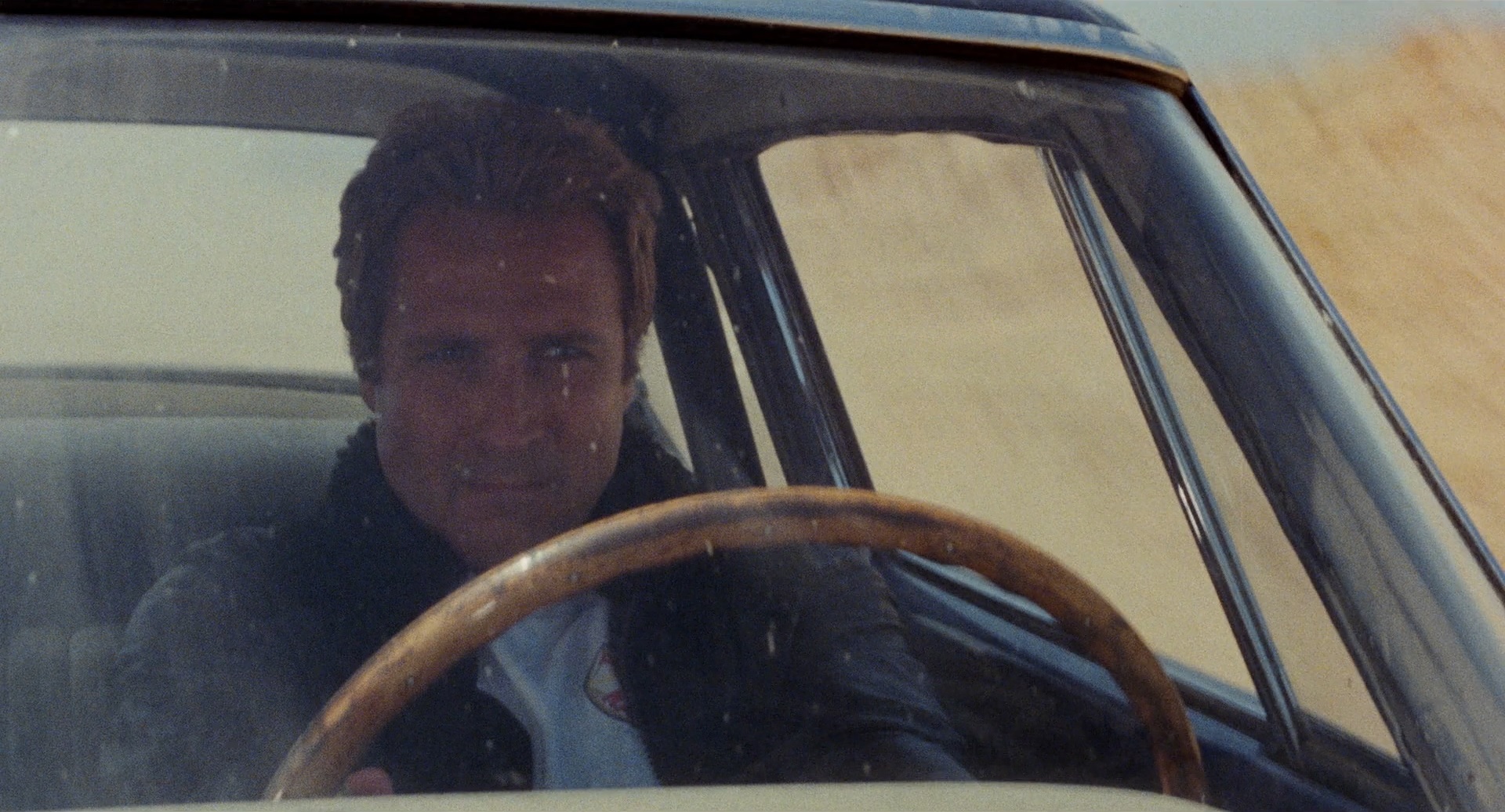 This movie is delightfully free of complicated socio-political questions and instead decides to entirely devote itself to what amounts to boys playing with full-size toy cars. The stunts and wrecks in the movie all mirror real-life police chases that had happened in Rome. They really are spectacular. Merli, maybe the most prolific poliziotteschi actor, turns in his feathered hair and mustache for a short buzz and a clean shave. It’s a nice stretch for him, and the movie’s just a blast.

The final entry in the box set is an outlier, both in approach and in timeframe. It’s another movie by Vittorio Salerno, but it’s the earliest of the bunch. 1973’s awkwardly titled No, the Case Is Happily Resolved shows the real darkness behind the police during the Years of Lead. While many films focus on the police, whether corrupt or virtuous (although usually corrupt), here we have the police more as the clueless stooges of a deeply corrupt system and the machinations of the wealthy.

In the country, a young family man (Enzo Cerusico) on a fishing trip happens upon a grisly scene: a middle-aged man (Riccardo Cucciolla) beating a woman to death with a pipe. The two men lock eyes and the eyewitness scarpers quickly. Though he tries to get back to town—any town—to speak to the police, they seem uninterested in listening and thus ignore him. Eventually, he just decides it’s none of his business and goes home to his wife and daughter.

Unfortunately, the murderer—a wealthy university professor—has better luck and goes to the police. He presents himself as the eyewitness and his counterpart as the murderer. The family man, now terrified the police will track him down, grapples with whether to drop the whole thing, as the professor suggests to him once they finally meet, or whether to do the right thing. But is it too late?

This is a bit of a devastating movie for a number of reasons, but not least because it feels as though our poor witness is doomed from the start. The system itself is so stacked against him when all he did was witness a murder. The police are uninterested in the truth once they have a suspect they can prosecute and persecute. To wit, this is the only movie in the set without some kind of “sympathetic” police presence. Instead, our investigative character is a flamboyant veteran newspaper reporter (the director’s brother again) who believes our hero to be innocent and tries to prove it. 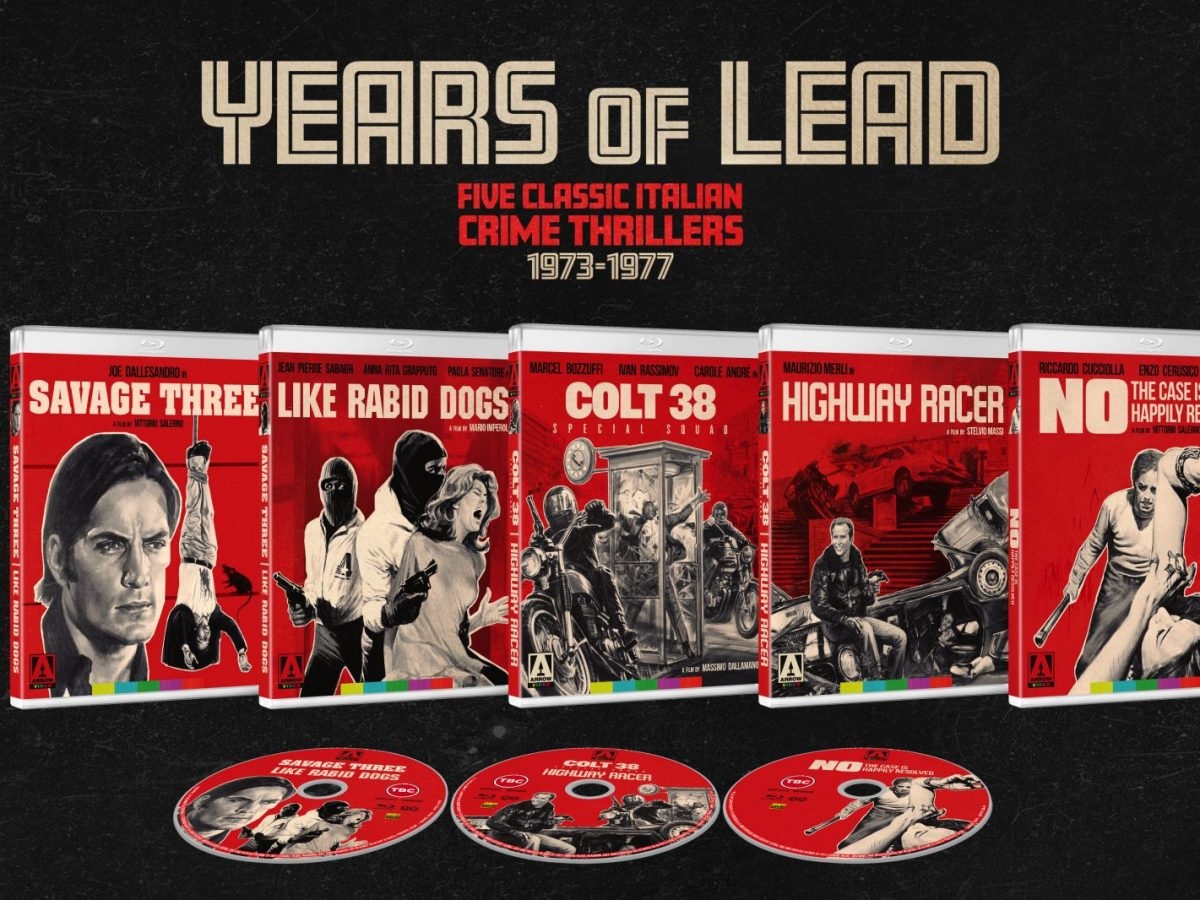 Give Them a Watch!

The Years of Lead were a truly volatile time for a nation only a few decades removed from fascist rule. It was during this period Italy made some of its most interesting popular cinema. Arrow’s Years of Lead set does an amazing job of reflecting all of the many facets of what a “crime” movie is. They’re very rarely glamorous, and often a bit tough to watch. As with the spaghetti western earlier, poliziotteschi would eventually become ridiculous, over-the-top parodies of themselves. However, when they work seriously, as most of these films do, they’re the most interesting and reflective of a country on the brink.