Scorpion and Its Babies Look Unreal Under UV Light - Nerdist

Scorpion and Its Babies Look Unreal Under UV Light

If you’re wondering how to begin that X-Files spec you’ve been working on since 2012, or just want more evidence that organisms can be bizarre and psychedelic across the entire electromagnetic spectrum, check out animals under UV light. Because everything from springhares to platypuses glow under ultraviolet emissions. And, perhaps most terrifyingly, scorpions.

In the video above, which comes via Laughing Squid, artist and designer, The Butterfly Babe (a.k.a. Sarah Folts), shows one such scorpion. Folts notes in the video’s description that the scorpion has proteins in its exoskeleton that react to UV light and consequently give off a green glow. Fulton adds that the exact reason for the scorpions’ fluorescence is unknown, but biologists have theorized it may help the predatory arachnids to find each other. Or, biologists speculate, it’s simply an evolutionary fluke.

Regardless of the reason the scorpion exhibits fluorescence, the characteristic is downright eerie. Especially considering all of the scorpion babies on its back. And its sharp claws. And gnarly stinger that probably jams venom deep into its victim’s bloodstream. Incidentally, good luck sleeping anytime in the next decade! 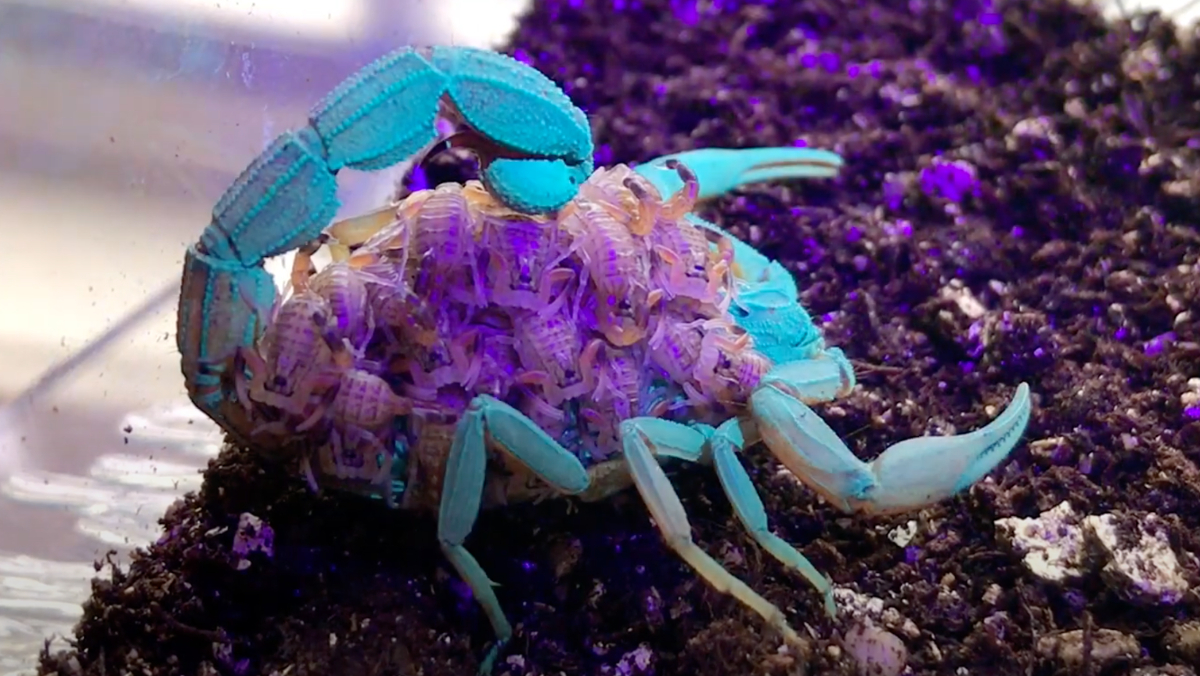 Aside from being nightmarish, this is also the first time we’ve seen intrinsic fluorescence in something other than mammals. Or glowing lava rocks for that matter. Which makes us lean more toward the idea that this ability is unnecessary for survival. Especially since blacklight parties amongst animals is so very rare.

Anybody who’s now ready to dive further into the world of strange animal glows, there are a surprisingly large number of sources to peruse. One could check out this wild, neon firework of a sea urchin for example. Or maybe even artfully arranged bacteria; some of which are real 8-bit beauties. And, of course, some other scorpions who, while fictional, are perhaps even freakier?