In the early 1980s, folklorist Alvin Schwartz terrified and delighted kids and tormented parents with his collection of urban legends and campfire tales, Scary Stories to Tell in the Dark. For many kids, it was likely their first introduction introduction to the horror genre, and while introducing a screening of the film adaptation, co-writer and producer Guillermo del Toro hoped that the film could be a similar entry point for young, burgeoning horror fans.

Given that Scary Stories to Tell in the Dark, directed by André Øvredal, is a PG-13 horror flick aimed at younger audiences, it’s impressively gruesome, and thematically rich, drawing on political allegory that goes far beyond the simple spooks and scares of the stories themselves. 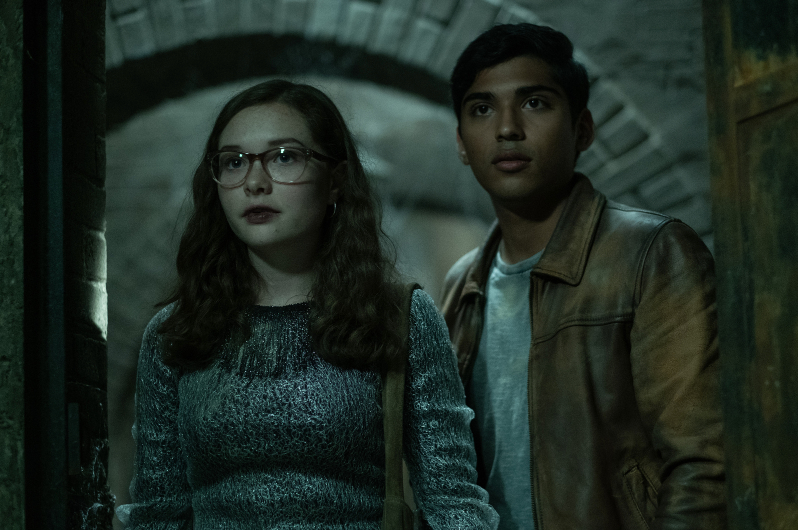 Looking for some adventure, the new crew heads to the local haunted house, once owned by the Bellows Paper Mill dynasty in the 19th century. Rumor has it their shut-in daughter Sarah would tell the local kids scary stories from inside the walls, and the kids would later die. Horror-obsessed Stella finds Sarah’s book of stories, and when she takes it home, the book starts writing itself anew. Each story, Scary Stories classics like “Harold,” “The Big Toe,” and “The Red Spot,” is enacted bloodily on Stella’s friends, one by one. So Stella does what any nerdy goth girl would: research. She and Ramón dive into the town records on Sarah Bellows, looking for answers and trying to save her friends.

Norweigan director Øvredal, known for Trollhunter and The Autopsy of Jane Doe, combines a fluid, spectral camera presence, with impressively old-school production design, and the kind of terrifying but intriguing monsters and ghouls that del Toro is known for. The filmmaking is swift, stylish and incredibly suspenseful, and scary enough to be accessible to genre newbies and please experienced horror hounds alike.

There are the fantastical creepy crawlies in Sarah’s stories and then there’s the imminent horror of real life the kids must face, newly accessible to the world on TV reports from warzones, and mediated through horror movies like Romero’s zombie flicks, and the Universal monster movie posters that paper Stella’s room. Ramón grieves for his brother, sent home from the war “in pieces,” and then has to face the grotesque monster of “Me Tie Dough-ty Walker!,” who assembles and reassembles himself limb by limb. They discover there’s also no denying the horror of Sarah’s life, locked up at home simply for being different, tortured in an insane asylum. Her blighted existence is created by oppressive capitalism and patriarchy, her cursed stories an expression of pure rage at her persecution.

“Stories are what make us,” says Stella, a young writer who believes wholeheartedly that stories will bring us together, despite their devastating power in this tale. What’s clear in this film is that stories, especially horror stories, help us process the world around us, help us to channel our rage, fear, and sadness, and that is why scary stories will always be an important part of life, for kids and adults alike.