Commemorating the filmâ€™s fiftiethÂ anniversary, Waxwork Records is releasing the Original Motion Picture Soundtrack to George A. Romeroâ€™s Night of the Living Dead on October 31â€”Halloween. Featuring 47 original tracks as well as a bonus radio spot on two LPs, the release marks the first time that the soundtrack has ever been released in its complete form.Romeroâ€™s 1968 film is widely regarded as one of the most influential horror films of all time, ushering in and virtually defining the modern zombie now for more than five decades. The independent, low-budget production recouped more than 250 times its budget and went on to be considered one of the biggest box office successes of all time. Romero elected to use library music and other sources to create the unsettling backdrop for his benchmark story about a small group of survivors shocked to discover that the dead have risen from their graves, eager to feast on the brains of the living. 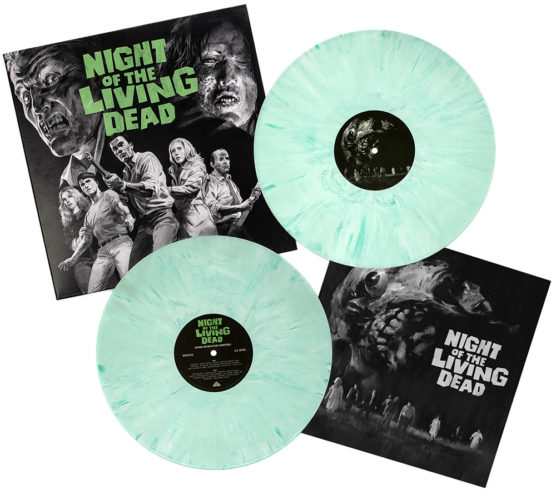 For this unprecedented release, Waxwork collaborated with Image Ten, the original production company that made Night of the Living Dead, to locate all of the original music used in the film. Restoring and remastering the music on two 180-gram slabs of â€œghoul greenâ€ vinyl, Waxwork has effectively unearthed one of the defining pieces of ephemera that shaped the horror genre into what it is today. Waxwork previously released Goblinâ€™s original score for this filmâ€™s sequel, Dawn of the Dead, earlier in 2018, and this should make for a perfect companion piece. (If you want to find the library music from that film, however, youâ€™ll have to look a little harder; Trunk Records released a compilation in 2004 that is, unfortunately, long out of print.)The Night of the Living Dead release features all-new art by Robert Sammelin, a booklet of never-before-seen production photos, an essay by The Shape of Water co-writer Daniel Kraus (who is finishing Romero’s The Living Dead novel), liner notes by the filmâ€™s sound engineer Gary Streiner, and deluxe packaging. The manufacturer’s suggested retail price is $40.Follow Waxwork Recordsâ€™ Twitter account for to-the-minute updates when the release will go on sale on Wednesday, October 31. And check out four tracks, made available exclusively to Nerdist, from this highly-anticipated new release!

TAGGED: Dawn of the Dead, Waxwork Records, George A. Romero, Night of the Living Dead, goblin