Everything We Know So Far About IT CHAPTER TWO - Nerdist

Everything We Know So Far About IT CHAPTER TWO

The adult versions of the Loser’s Club are gracing the cover of a special Comic-Con issue of Entertainment Weekly. And they’ve just released a preview of said cover via Twitter. The whole gang is here – James McAvoy as Bill Denbrough,  Jessica Chastain as Beverly Marsh, Bill Hader as Richie Tozier,  Jay Ryan as Ben Hanscom,  Andy Bean as Stanley Uris, Isaiah Mustafa as Mike Hanlon, and James Ransone as Eddie Kaspbrak. And everyone looks ready to kick Pennywise’s butt back to the sewers.

You’ll float too.? The Losers are back to battle Pennywise — but who will get the last laugh? Get an exclusive look at ‘IT Chapter Two’ in our special #ComicCon bonus issue, distributed throughout the weekend in San Diego: https://t.co/QuNFo2jevd #ITMovie Story by @clarkcollis pic.twitter.com/Qo55k18nZE

n 1990, Stephen King‘s novel about a group of young losers terrorized by a clown was turned into two-part miniseries starring Tim Curry as the disturbing alien clown menace known as Pennywise. That adaptation would permeate pop culture for decades, which is why New Line Cinema and Warner Bros. announced a remake of It in 2017. Though many questioned the necessity of such a thing, such consternation was misplaced: the film version of It has inspired a whole new generation to be terrified by sewer grates, red balloons, and clowns. And, now that It: Chapter Two is gearing up to begin production, here’s a running tally of everything we know so far about the sequel.

In February of 2018, Variety reported that Jessica Chastain (Crimson Peak, Woman Walks Ahead) was in talks to play the adult Beverly Marsh in It: Chapter Two. By April, Bill Hader (Inside Out, Trainwreck) and James McAvoy (X-Men: Apocalypse, Split) had begun the process of signing on to play the grown-up version of Richie Tozier and Bill Denbrough, respectively. In May, production completed the main cast with Andy Bean (Allegiant) tapped to play Stan Uris while James Ransone (Sinister) won the role of Eddie Kaspbrak and “Old Spice Guy” Isaiah Mustafa was cast as Mike Hanlan. Rounding out the adult Losers was Jay Ryan (Top of the Lake), who will play Ben Hanscom. Deadline revealed in June that Xavier Dolan (Elephant Song) will play Adrian Mellon, with Will Beinbrink (Queen of the South) cast as Tom Rogan. Teach Grant (Altered Carbon) also joins the cast as Henry Bowers. Bill Skarsgard (Atomic Blonde) returns as the incredibly creepy Pennywise.

It’s not online but the first footage of It: Chapter Two has been screened, and here’s what we know so far.

Via Deadline, the primary scene is of the adult Beverly Marsh (Jessica Chastain) returning to her old apartment to retrieve the “winter fire” love letter from Ben. Her father is no longer there, but an old woman now lives there instead, who tells her that her father has passed. 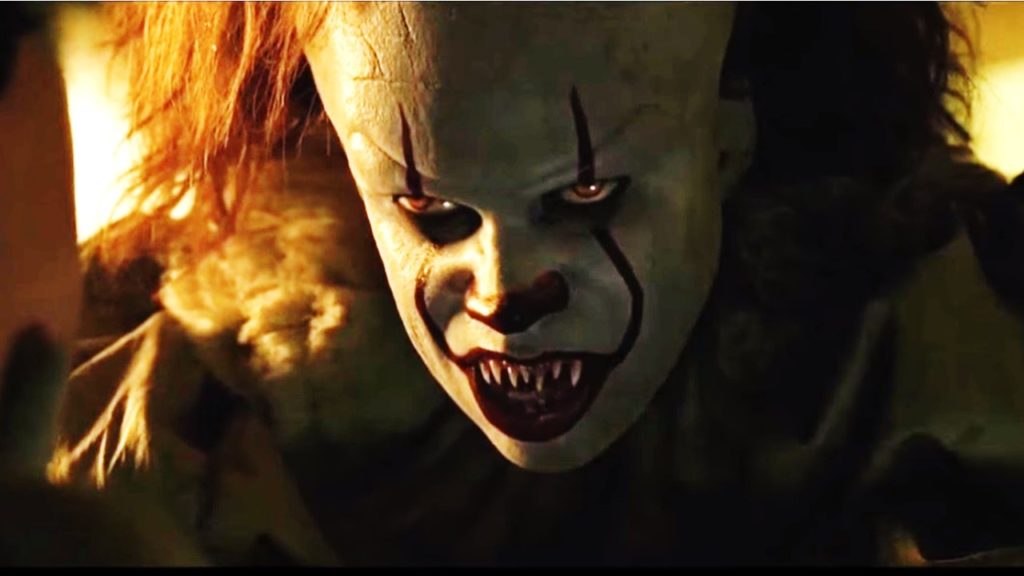 io9 has a very detailed blow-by-blow description of what happens next, including:

The woman asks if Beverly wants some tea, which she accepts, and you just begin to get the sense something is not right, from the odd music she puts on the record player to the flies on the window. Mrs. Kirsh apologizes for the heat and says it gets so hot you could just about die. She then adds something along the lines of, “You know what they say about death? No one who dies in Derry ever really dies.” Then Mrs. Kirsh just stops moving and stares at Beverly. Frozen. Staring…

Variety adds, “In addition to showing Chastain’s spine-tingling return home, Warner Bros. showed footage of Pennywise floating through the air against a sea of red balloons, as well as a reunion of the Losers Club at a Chinese restaurant. There was also a shot of them descending into the town’s sewers where Pennywise lives.”

And Deadline also has some quotes from the cast, who introduced the clip: James McAvoy was apparently brought aboard the project thanks to, of all things, X-Men: Dark Phoenix, in which he also appears with Chastain, who volunteered him for the Loser’s Club role. According to Hader, he was cast because “Richie is funny to himself… So it was ‘Who’s an asshole who laughs at his own jokes?’” 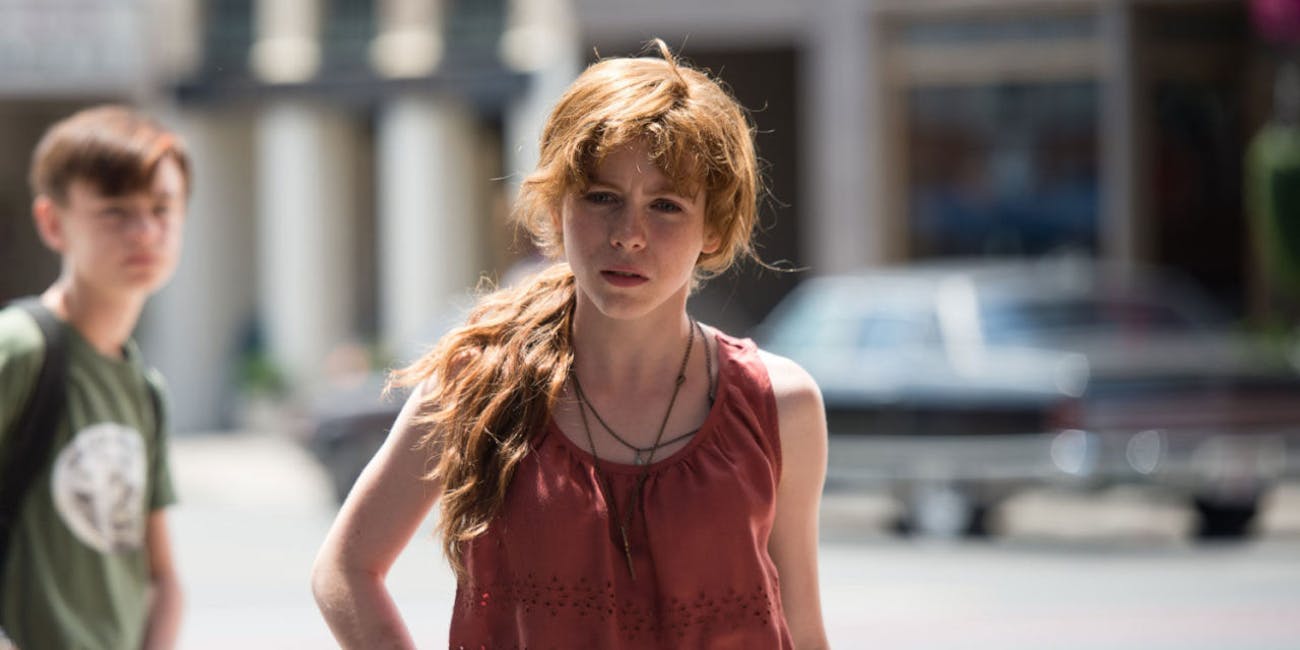 Director Andy Muschietti closed the panel by saying if the first film was so scary you’d [soil] your pants, he’s doubling down on the second. When It hit theaters on September 8, 2017, it immediately smashed records across the board, including dethroning 2011’s Paranormal Active 3 for the highest opening weekend gross for a horror movie ever. By September 25, New Line announced the sequel, It: Chapter Two would arrive in theaters on September 6, 2019.

New Line has tapped Checco Varese (The 33) as director of photography, with Oscar-winner Paul D. Austerberry (The Shape of Water) as the production designer. Editor Jason Ballantine, (It, Mad Max: Fury Road), and Oscar-nominated costume designer Luis Sequeira (The Shape of Water, Mama) round out the behind-the-scenes creative team.

And speaking of behind the scenes, a photographer caught a photo of the adult Losers’ Club in costume on set (via Northumberland News):

The paper later provided the first look at Pennywise as he appears in the new movie. Aaaaand…he looks pretty much the same. Why mess with frightening perfection? Also, he’s sitting on the shoulder of a giant Paul Bunyan:

You can check out their full story here.

The first It focused on the Losers as children. While the Stephen King novel of the same name weaves two tales of Derry together, director Andy Muschietti chose a more linear story-telling narrative for his films. As such, It: Chapter Two returns to Derry almost three decades after the events of the first film. Every 27 years, evil returns to the sleepy Maine town and the time has come to pay the evil clown piper. Events are set into motion to draw the Losers — who have long since gone their separate ways — back together in the town they grew up in. But can these broken adults face their childhood trauma to save the town again? Speaking to Metro UK in August of 2017, Bill Skarsgard hinted It: Chapter Two would go deeper into the psychology of Pennywise. “[T]hat’s where I want to go for the second one, to delve into the psychological and metaphysical spaces of this transdimensional being.” In an interview tied to The Nun  at Slashfilm, screenwriter Gary Dauberman dropped a tidbit or two to Fred Topel, including the fact that the movie will have a definite ending that he hopes will “will satisfy the audience and maybe break their hearts a little bit.” (You weren’t really hoping for sequels not based on Stephen King material, were you? Not that this necessarily rules out that forever.) Dauberman says the biggest challenge was reintroducing the characters now that they’re all in separate places, but that “we see pieces of who they’ve become which I think is really exciting.” He was looking forward to get them to the Jade of the Orient Chinese restaurant reunion scene, so it sounds like we’re going to have a lot of fun with Pennywise’s creepy fortune cookies. Topel asks, given the photos of the older actors meeting their younger counterparts that we’ve seen on social media, if they somehow meet in the movie, and Dauberman’s response is ambiguous: ” I’m a little cagey when it comes to these responses. I’m not sure what I can say but I will say for me, being a fan, it was awesome to see them together in that photo.” Given Pennywise’s penchant for pushing buttons, it wouldn’t be surprising to see younger versions as hallucinations.

In another interview with Cinemablend’s Eric Eisenberg, Dauberman mentions that the second film will tackle the Ritual of Chud, though obviously (based on the first movie) not the unfilmable sex parts. It probably will include the notion of biting down on tongues until somebody laughs, and the major element of minds entering another dimensional plane to do spiritual battle. Whether that means the immortal turtle will show up (yes, if you haven’t read the book, there’s an immortal turtle, as hinted in a couple of throwaway moments in the first film via LEGO and a line of dialogue in the swimming scene), who knows. But for now, Dauberman says, “Andy would kind of go off and think about Chüd and how he wants to visually represent all that stuff. He just came up with some brilliant, brilliant stuff… It really is going to be amazing.” It: Chapter Two has wrapped production, according to director Andy Muschietti in an Instagram photo that reveals he let his hair and beard grow during the shoot. He offered bilingual thanks to his crew and fans.

IT chapter 2 was an 86-day roller coaster ride. Never had so much fun making movies as this one . I had a relentless and inspired crew who believed in this adventure as much as i did and a cast that put their heart and soul behind every second of performance. A huge thank you to all of them and also to my producer and sister @barbaramus who dealt with all the shit that a production like this has reserved for producers. And last but not least , the fans who day by day boosted our spirits by reminding us how much this story means to them. Thank you and Love to you all ???????❤️ /// la filmacion de IT 2 fue una paliza de 86 dias pero nunca me divertí tanto haciendo una peli . Gracias al incansable equipo y al elenco por creer en la visión y ponerle el alma y el corazón a cada dia de rodaje. Gracias a mi hermana @barbaramus por el trabajo inmenso que conlleva producir una peli como esta ; y por ultimo a los fans que vienen bancando con tanta pasión esta segunda parte. Gracias a todos y prepárense para flotar de nuevo ???????❤️ #itchapter2

TAGGED: Everything We Know So Far, It, IT Chapter Two, it movie