The Mandalorian season 2 wrapped up at the end of 2020, but we spent the whole holiday replaying it over and over in our minds. It has a lot of fascinating implications for season 3, plus several other Star Wars properties and spin-offs. But we’ve talked about lore to death; let’s get into the film nerd stuff!

Ever since it first premiered in 2019, The Mandalorian has taken George Lucas’ original intent—to remix westerns, samurai films, and space opera—and threw it into hyperdrive. This show is wall-to-wall references, and in season 2 they went from mere pastiche to full-on, specific homage.

So here are just some of the movies The Mandalorian season 2 references.

“ Chapter 9: The Marshal” has several references to classic American and Italian westerns. Our favorites involve Sergio Leone movies. When Cobb Vanth, clad in Boba Fett’s Mandalorian armor, enters the saloon, we’re treated to a would-be showdown. This very much resembles the “good-natured” rivalry between Clint Eastwood and Lee Van Cleef in Sergio Leone’s For a Few Dollars More.

During Cobb’s flashback, we see him trudging through the desert without water; this reflects a similar scene in The Good, the Bad, and the Ugly. 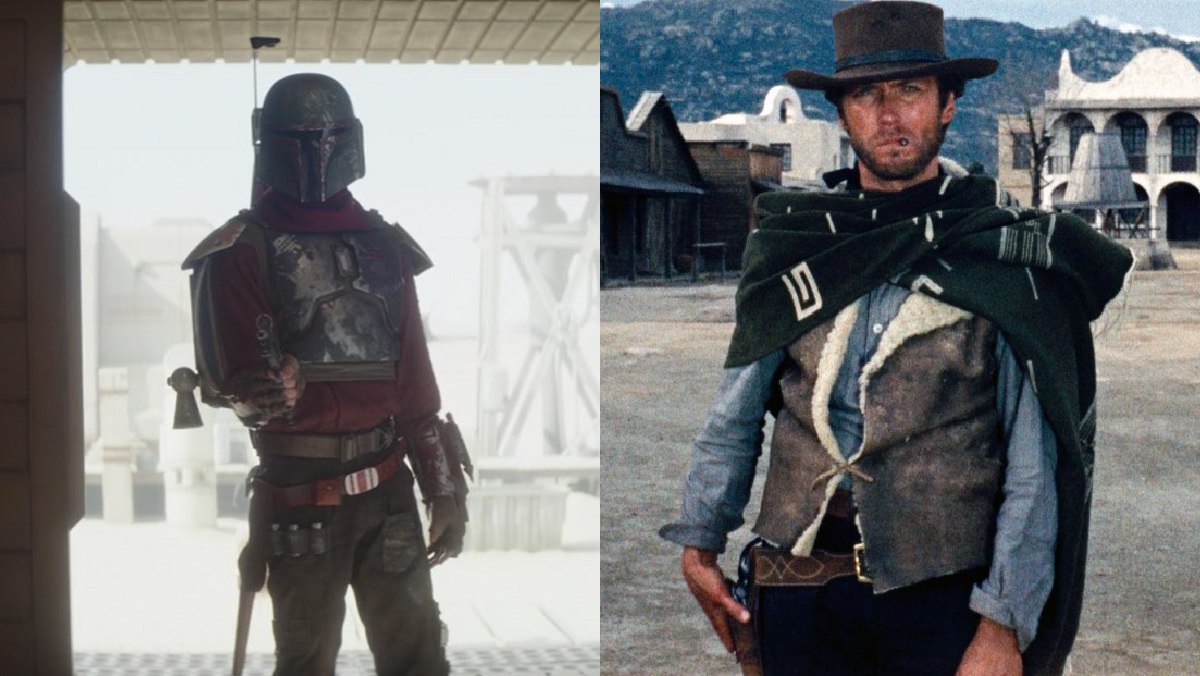 And later, he heads back to Mos Pelgo after obtaining the armor. This pays heavy tribute to A Fistful of Dollars, with both Cobb and the Man with No Name utilizing chest armor.

“The Marshal” also pays tons of tribute to cult favorite and cable staple Tremors. The Krayt Dragon moves the desert ground in a wave pattern, the same as in Tremors, and Cobb Vanth even says the Dragon senses vibrations in the ground, which is how the graboids hunt in that movie. Boy, Tremors is awesome.

In “Chapter 11: The Heiress”—as confirmed on Twitter—director Bryce Dallas Howard specifically modeled the sequence of the Razor Crest falling into the atmosphere after a similar sequence in her dad Ron Howard’s film Apollo 13. Cool that they both make stuff in the Star Wars universe, eh?

“Chapter 12: The Siege” finds Mando helping Greef Karga, Cara Dune, and Mythrol infiltrate and destroy the last Imperial base on Nevarro. This set up and execution has a lot in common with WWII men-on-a-mission movies. Things like 1961’s The Guns of Navarone, and indeed its 1978 sequel Force 10 from Navarone. That sequel stars Han Solo himself, Harrison Ford. It also costars the man who plays Greef Karga and this episode’s director, Carl Weathers.

“Chapter 13: The Jedi” suddenly shifts gears visually. We go from lots of western and war film references to NOTHING BUT SAMURAI MOVIES. They may as well have gone to the planet Kurosawa. The hazy planet of Corvus, in perpetual twilight, draws to mind several films by the great Japanese director Akira Kurosawa, including Seven Samurai and Throne of Blood. Most prominently is Yojimbo, in which a lone samurai takes on the corrupt officials of a fraught rural village. Yojimbo’s follow-up, Sanjuro, also comes into play in Ahsoka Tano’s fight against Magistrate Elsbeth.

Our favorite reference in “Chapter 14: The Tragedy” comes at the end of Boba Fett’s armor-clad badassery when he shoots a missile at one of the fleeing Imperial transports which crashes into the other. When Mando says, “Good shot,” Robert Fett replies, “I was aiming for the other one.” This is a direct reference to the 1960 western The Magnificent Seven when James Coburn shoots a guy way off on a ridge. When someone marvels at his accuracy, he quips, “I was aiming for the horse.” The Magnificent Seven is, of course, the Hollywood western remake of Kurosawa’s Seven Samurai. See above.

Now “Chapter 15: The Believer” might be the easiest one yet. It doesn’t just reference a classic action movie, it does it nearly 1 for 1. In the episode, Mando and Migs “Lots of Planets Have a Boston” Mayfeld have to pretend to be Imperial troopers driving a transport truck full of volatile chemicals through the jungle. Drive too fast or jostle too much and the chemical will explode.

This is the exact plot of Henri-Georges Clouzot’s 1953 film The Wages of Fear, in which four down-on-their-luck men agree to transport nitroglycerin through the South American rainforest amid particularly rough terrain. Now as some of you may know, William Friedkin remade The Wages of Fear as Sorcerer in 1977, a movie that the original Star Wars annihilated at the box office.

And finally we have “Chapter 16: The Rescue.” Interestingly enough, the most direct film reference in “The Rescue” comes from another Star Wars movie. Luke Skywalker slicing up Dark Troopers on his way to our heroes looks an awful lot like Darth Vader’s hallway slaughter in the closing minutes of Rogue One.

And those are just some of the many, many cinematic references in season two of The Mandalorian. Did we miss any of your favorites? Let us know and maybe we’ll do a part two!