Although Tesla vehicles are growing better and better at driving themselves on highways, they still require a lot of human input; not only while in motion, but also while charging. Tesla Model 3 owner and engineer Pat Larson however, has devised a way to eliminate that second, not-yet-robotic process. With a charger that automatically—and very awkwardly—plugs into his car to charge it while he’s at home.

Laughing Squid picked up on Larson’s innovative Tesla charger. Unfortunately, the engineer doesn’t offer much information about himself, but it’s obvious he has some wicked skills when it comes to electrical engineering. Larson discusses the complete build in his video (below), but things get real technical real quick. At least for us nerds who aren’t familiar with the likes of TensorFlow.

As Larson outlines, his automatic charger is essentially a normal 240-volt Tesla home charger attached to a robotic arm. A small, Raspberry Pi is “the brains” for the whole system, which relies on a camera and distance sensor to locate the Model 3’s charging port.

Larson notes that the Pi—a compact computer board—runs machine-learning algorithms in order to have the charger line up with the car’s charge port. Essentially, it seems his’s program has many images of the Model 3’s charge port from different angles. Using the camera and distance sensor, the charging robot arm figures out which angle of approach it needs to take to insert the charging nozzle properly. (An automatic command from the Tesla app opens the charge port in the first place.) 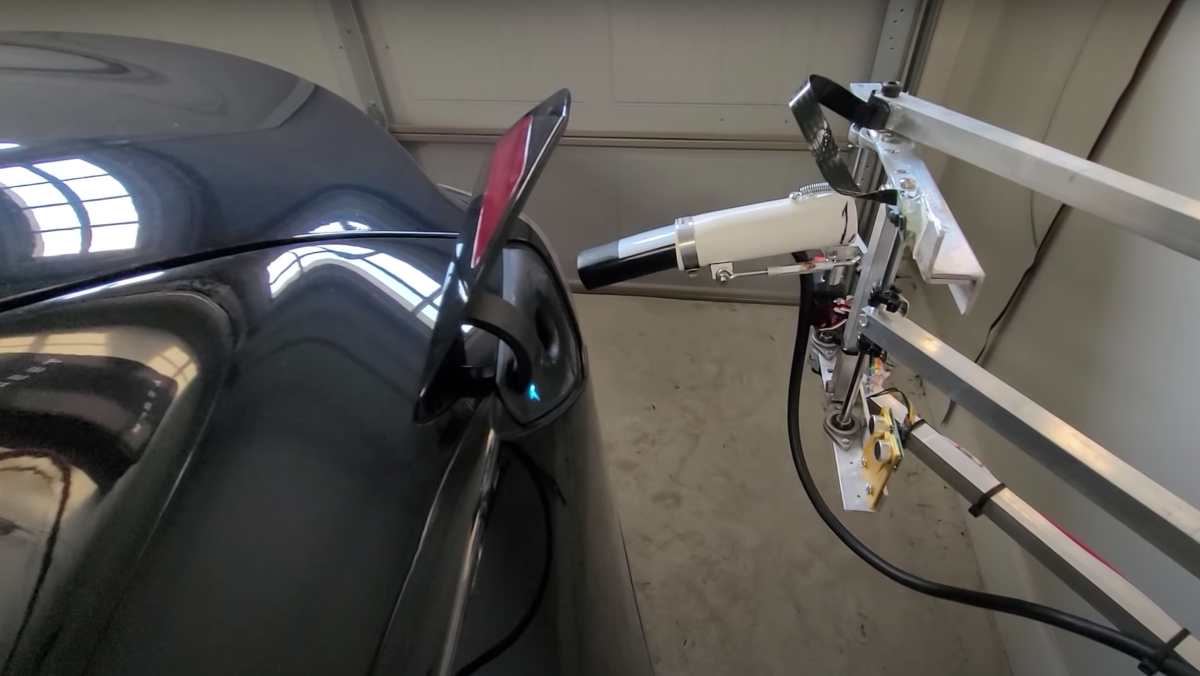 While Larson’s robot charger certainly works, it does have a few drawbacks. Namely, how slow and awkward it is. The arm, for example, requires a handful of self-corrections before it finally positions itself properly. There are also points where the arm stalls for what seems like a half-minute. Of course that really doesn’t matter, though, because Larson still doesn’t have to do anything to plug in. Except for actually build the robot arm. Which we’re sure was nowhere near as troublesome?