Tesla CEO Elon Musk has said that the burgeoning electric car company is, apparently, “vastly ahead” of all the other automotive manufacturers when it comes to autonomous driving, which is certainly a bold claim. But watch the below clip of Tesla’s insanely sophisticated autopilot software navigating a Tesla through a series of busy streets and intersections, and Musk’s claim may not seem so outlandish. At the very least the clip will probably remind you of the T-800’s heads-up display (or HUD) from Terminator 2.

Video of what Tesla’s autopilot “sees” while it’s navigating a vehicle along a given route has appeared on the internet plenty of times before, but this time around it’s managed to go viral—certainly on Twitter, at least—in a way that seems to be unprecedented. We first spotted the footage via a twitter account belonging to an engineer who goes by “Massimo,” although it’s seemingly been popping up on just about every popular social media platform.

In terms of what we’re actually looking at, it’s essentially Tesla’s proprietary artificial intelligence software figuring out what objects are present in the surrounding landscape and how to move through said objects toward a desired destination without hitting anything. (That’s obviously a gross oversimplification of what’s going on here, and would probably make Tesla engineers pull their hair out, but still, that’s kind of what autonomous driving boils down to.) 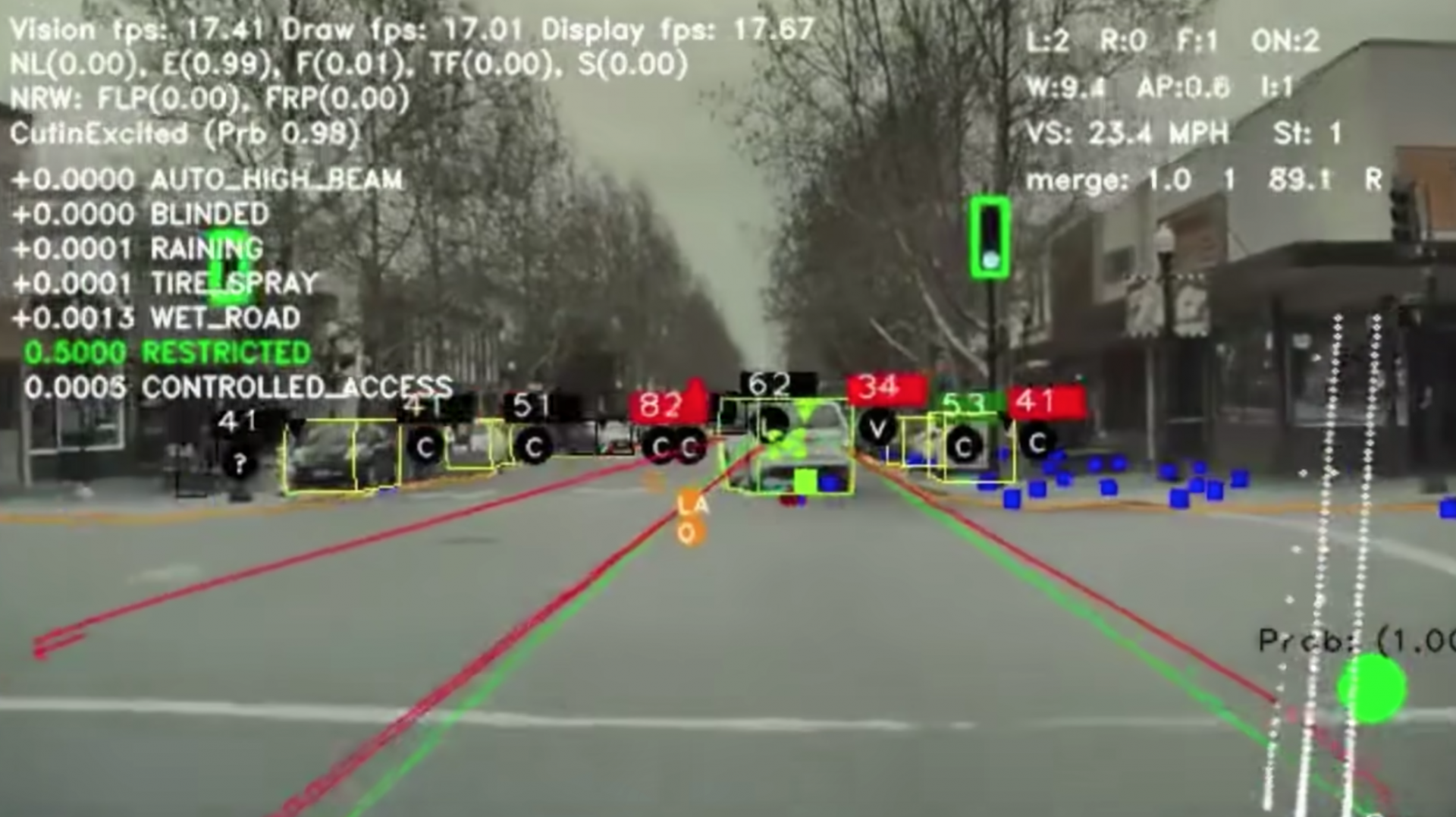 Tesla’s autopilot software works using neural networks, which are machine learning systems that are able to identify patterns in data and then use those patterns to achieve programmed goals—with the goal in this case ultimately being to get the car from point A to point B safely. Tesla’s neural networks are able to “learn” how to execute this task thanks to the enormous amounts of driving data that the company collects from its fleet of vehicles. With hundreds of thousands of Tesla cars on the road, all outfitted with camera and sensor suites that mark buildings, traffic lights, pedestrians, etc., the company is compiling an enormous amount of real-world experience that its neural networks can digest and turn into commands that will, hopefully some time soon, allow for fully autonomous driving.

Unfortunately, it’s unclear when Tesla, or any other automaker or tech company for that matter, will be able to produce fully fledged self-driving vehicles, but there’s no question they’ll have to include the kinds of machine vision and machine learning that are represented in this clip—and yes, that’s true even for the companies focusing on prototypes that use LIDAR. What is fortunate, however, is the fact that Teslas, as of right now, are not armed with a Minigun, smooth bipedal locomotion, or a surprisingly snug leather outfit. ‘Cause we’ve seen what happens when that combo comes together and it looks a lot like this:

What do you think about this clip of Tesla’s autopilot system “seeing” the world around it? Do you think Tesla is indeed “vastly ahead” of the rest of the automakers when it comes to full self-driving capabilities, or will some other dark horse soon overtake Musk and Co.? Let us know your thoughts in the comments!