Why Tesla’s Cybertruck Really Is the Vehicle of the Future

According to the internet’s reaction to Tesla’s Cybertruck, it seems fair to say that about half of people absolutely despise the extremely angular design, and about half either love it, or think it will grow on them eventually. But even if its facade is polarizing, and even if one of the car’s lead designers smashed its supposedly super-durable “armor glass” windows on stage with a metal ball, the Cybertruck is still undoubtedly the vehicle of the future. Here on Earth, and on Mars.

Yes, at first glance, the Cybertruck, revealed last night in Hawthorne, California, looks like a real-life rendering of all the car pictures you drew up as a child; we’ve seen that meme going around, and it’s hard not to agree. But look closer at the details of Tesla’s wicked futuristic pickup (available in the image gallery below) and, with an open mind, consider what it’s offering aside from 8-bit angles and a moniker straight out of a ’90s action flick that refers to the internet simply as “the net.” Upon closer inspection, a lot of what seems pointless or even downright absurd begins to make sense.

The CyberTruck video already has nearly 20,000 comments that seem to literally alternate between how cool, unique and desirable it is and how blasphemous and terrible it is. Haven’t seen anything so polarizing in a long time. You either love it or you hate it ?? https://t.co/q3oUoKAhFw

Setting aside the Cybertruck’s bat-guano insane performance specs—which include, for the top-range model, an eyeball-melting 0-60 time of 2.9 seconds, a 14,000+ pound towing capacity, and a battery range of 500 miles—there’s a lot here that hints at a vehicle that seems ludicrous as of 2019, but spot-on as of 2022-2024. Why those dates? Because that’s the window when SpaceX, the aerospace company that Tesla CEO Elon Musk also runs, plans on sending the first cargo and manned Starship rockets to Mars. And that is not speculation on our part.

Tesla Cybertruck (pressurized edition) will be official truck of Mars

Musk noted on his entertaining, albeit occasionally troublesome twitter account, that the “Tesla Cybertruck (pressurized edition) will be [the] official truck of Mars,” and while he didn’t elaborate on how the leader of a private entity could dub anything the official anything of a planet that we haven’t even set foot on yet, the point is clear: The Cybertruck is being built with the intent of one day being able to tumble along like a real-life Canyonero over the rocky terrain of Hellas Planitia. It may even do it by itself if Tesla can figure out its whole autonomous “robotaxi” fleet in the next couple of years.

Scoff if you must, but proof of the Cybertruck’s potential off- -worlding capabilities is already there in the slightly smashed pudding. Take for example the material the truck’s “structural skin” is made of—it’s “Ultra-Hard 30X Cold-Rolled stainless-steel,” which is exactly what the main body of Starship will be made of. And take another look at the retracting cover of the Cybertruck’s bed; if you think you’re looking at solar panels, you are correct. In fact, Musk also said, in another tweet, that there “Will be an option to add solar power that generates 15 miles per day, possibly more,” and that he’d “love this to be self-powered… [with] fold out solar wings [that] would generate 30 to 40 miles per day.” And anybody who’s read The Martian knows how important it will be to have solar-powered vehicles on Mars. 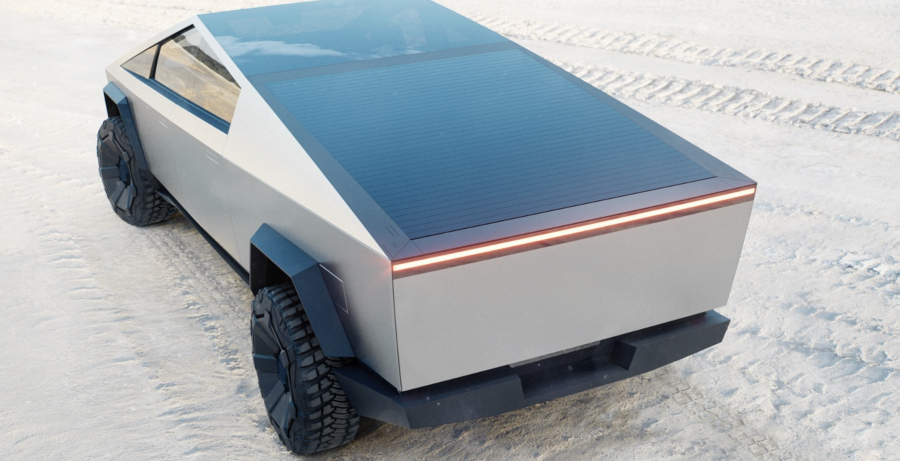 A look at the solar panels on the back cover of Tesla’s Cybertruck. Tesla

Then there’s the whole all-electric aspect of the Cybertruck. All of Tesla’s vehicles are, of course, fully electric, but this is especially important when considering a vehicle’s capability on Mars. Vehicles utilizing internal combustion engines wouldn’t operate on the Red Planet at all, considering the fact that they need oxygen to make all those thousands of tiny explosions happen, and Mars’ atmosphere has almost none of it (.13% of Mars’ atmosphere is oxygen, while Earth’s air is made up of 21%). Hydrogen-powered vehicles are also out of the question, because they require oxygen to run as well—not to mention hydrogen is hard to come by on Mars.

Heck, even the all-electric ATV that Musk showed off as his “one more thing” during the Cybertruck presentation could be taken as a future Martian vehicle. Imagine speeding off a red-rock jump on one of those little dark demons (which are, unlike the Cybertruck, indisputably awesome looking) and soaring through the space above the ground at surreal heights thanks to the relatively low gravity. If that doesn’t sound like fun on a bun, we don’t know what does.

Marques Brownlee’s first-ride impressions of the Cybertruck from the launch event.

To sum up, all we have to say is this: Before you relegate Tesla’s Cybertruck to the same dumpster of technological mistakes that’s full of Zunes, Macintosh TVs, and autonomous taxi drones (just watch, those ain’t going to be a thing), keep in mind that sometimes what appears to be hideous is just new, and what sounds unbelievable just needs a few years of engineering innovation to become reality. Although we would like to see those armor glass windows undergo a lot more testing before we actually jump in a Cybertruck for a Martian joyride. 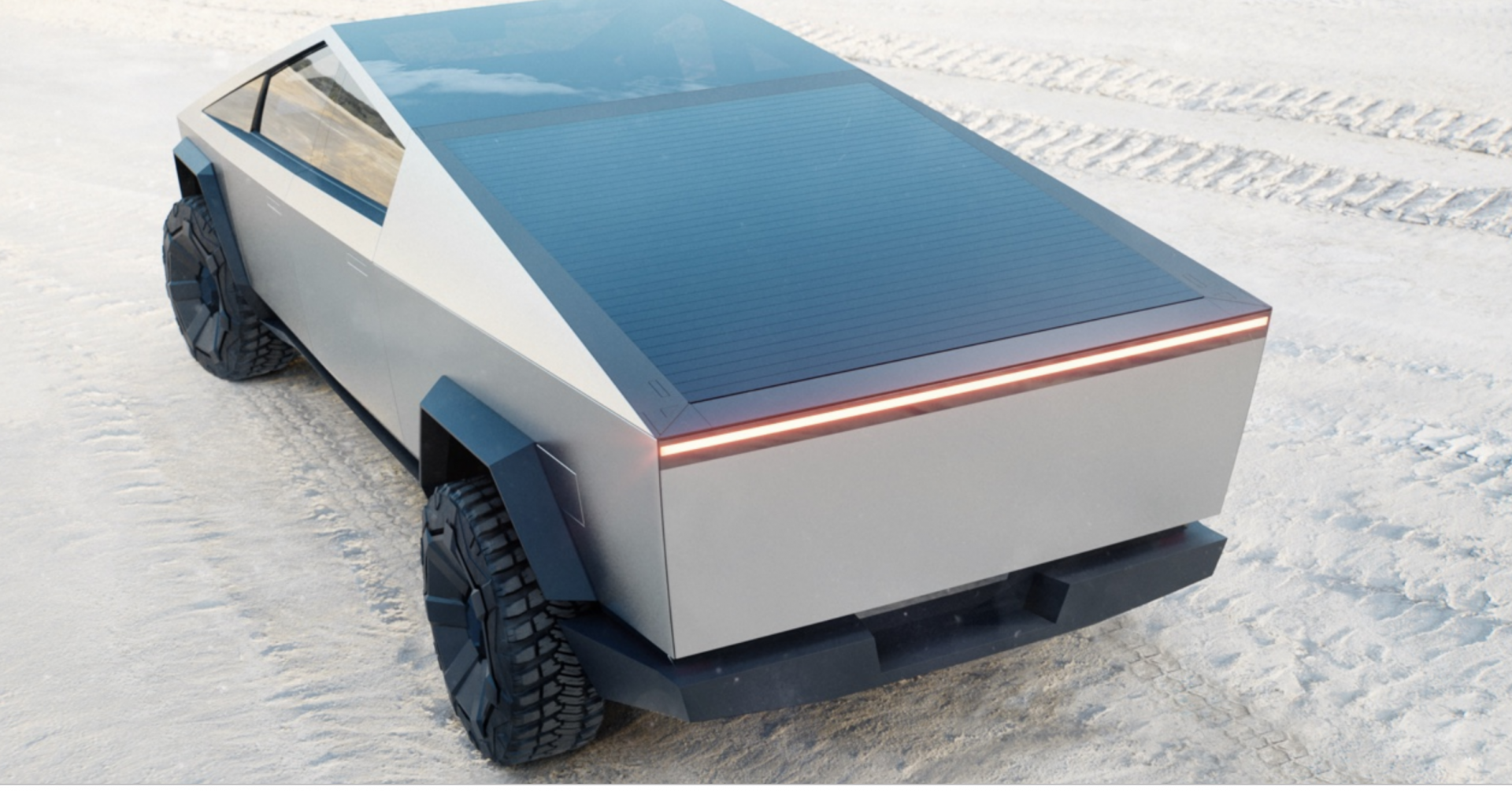 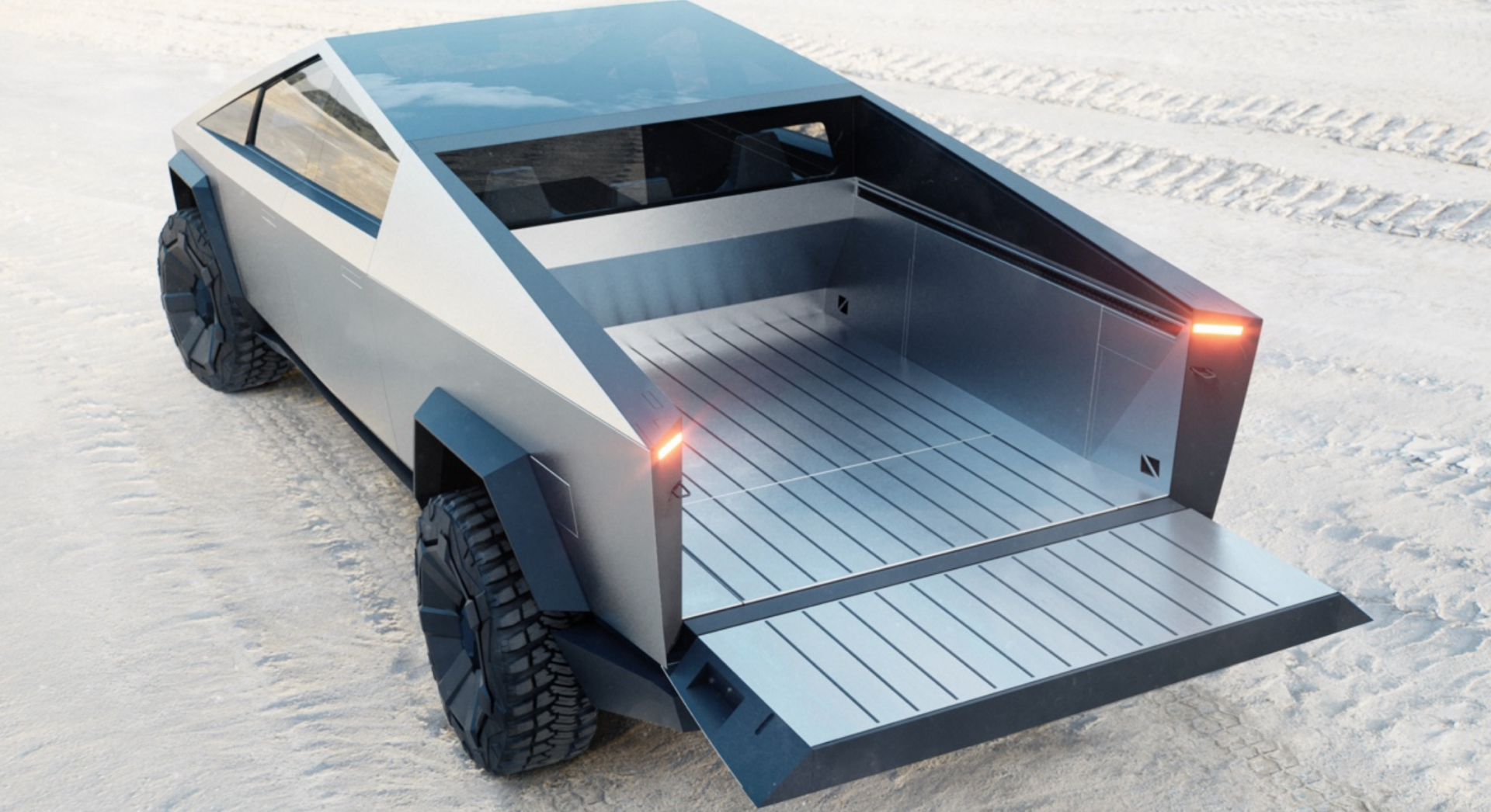 The Cybertruck with its back cover and gate open.
Tesla 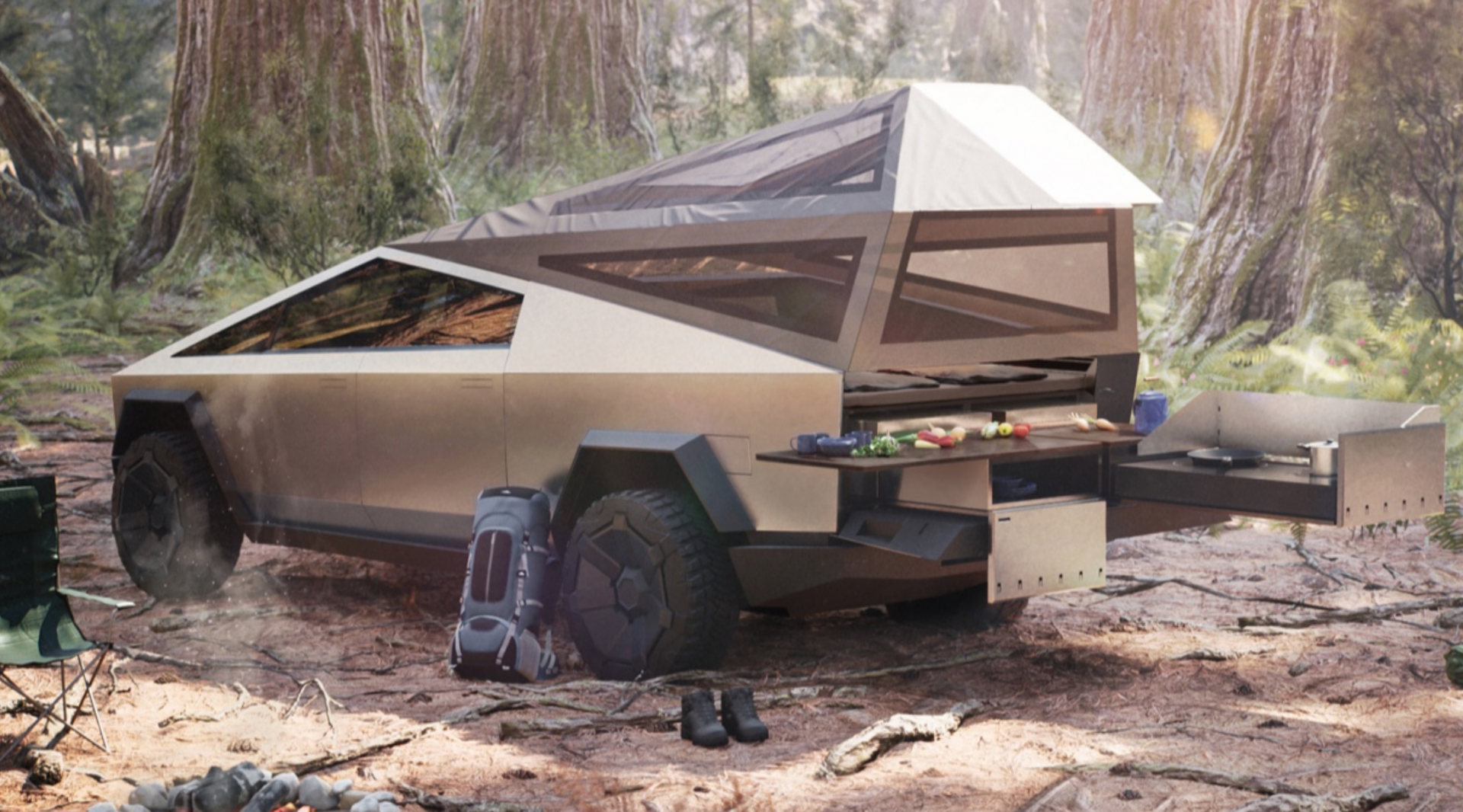 The Tesla Cybertruck with the official Tesla camper attachment.
Tesla 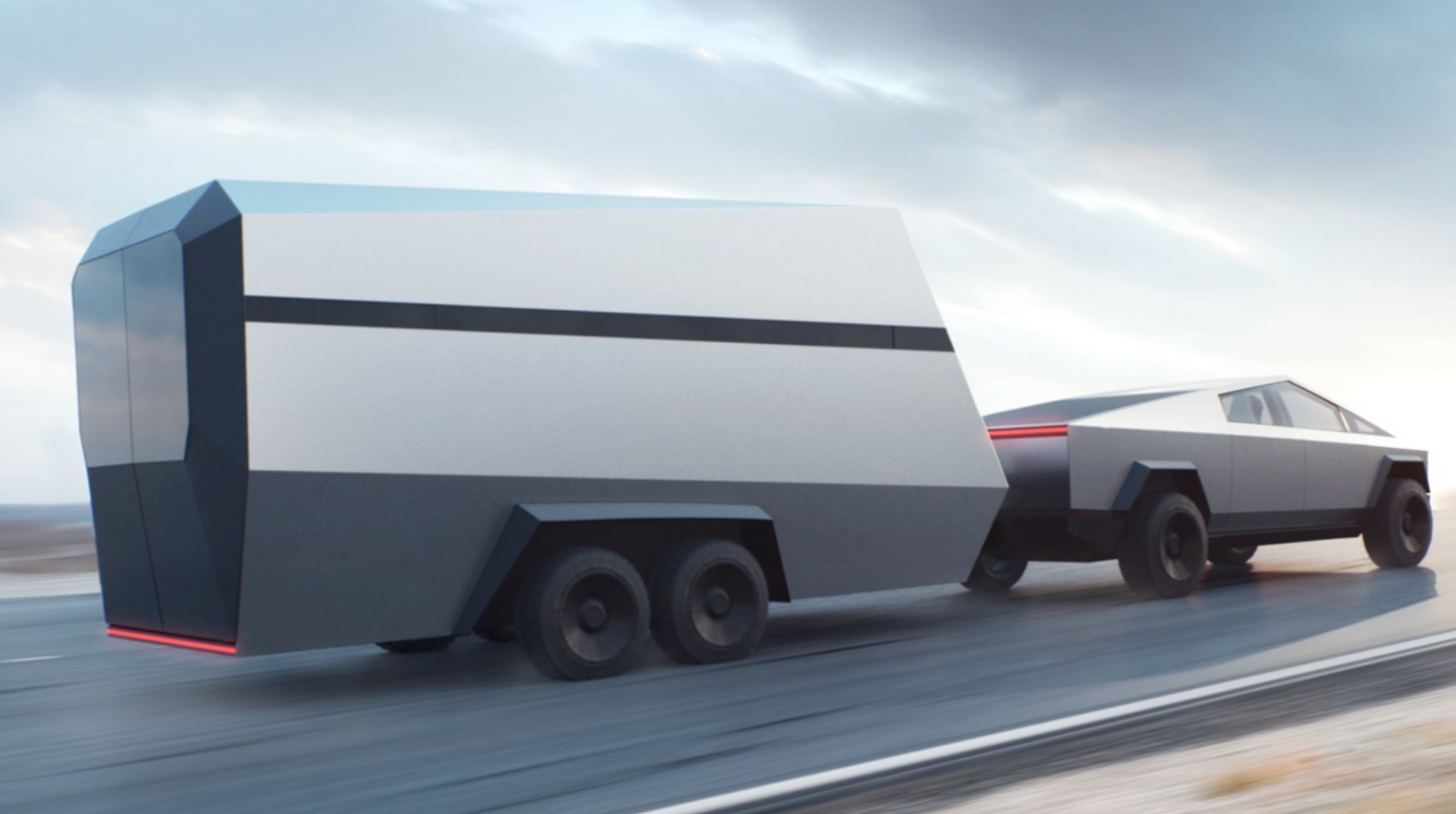 The Tesla Cybertruck supposedly has the ability to tow "near infinite mass."
Tesla 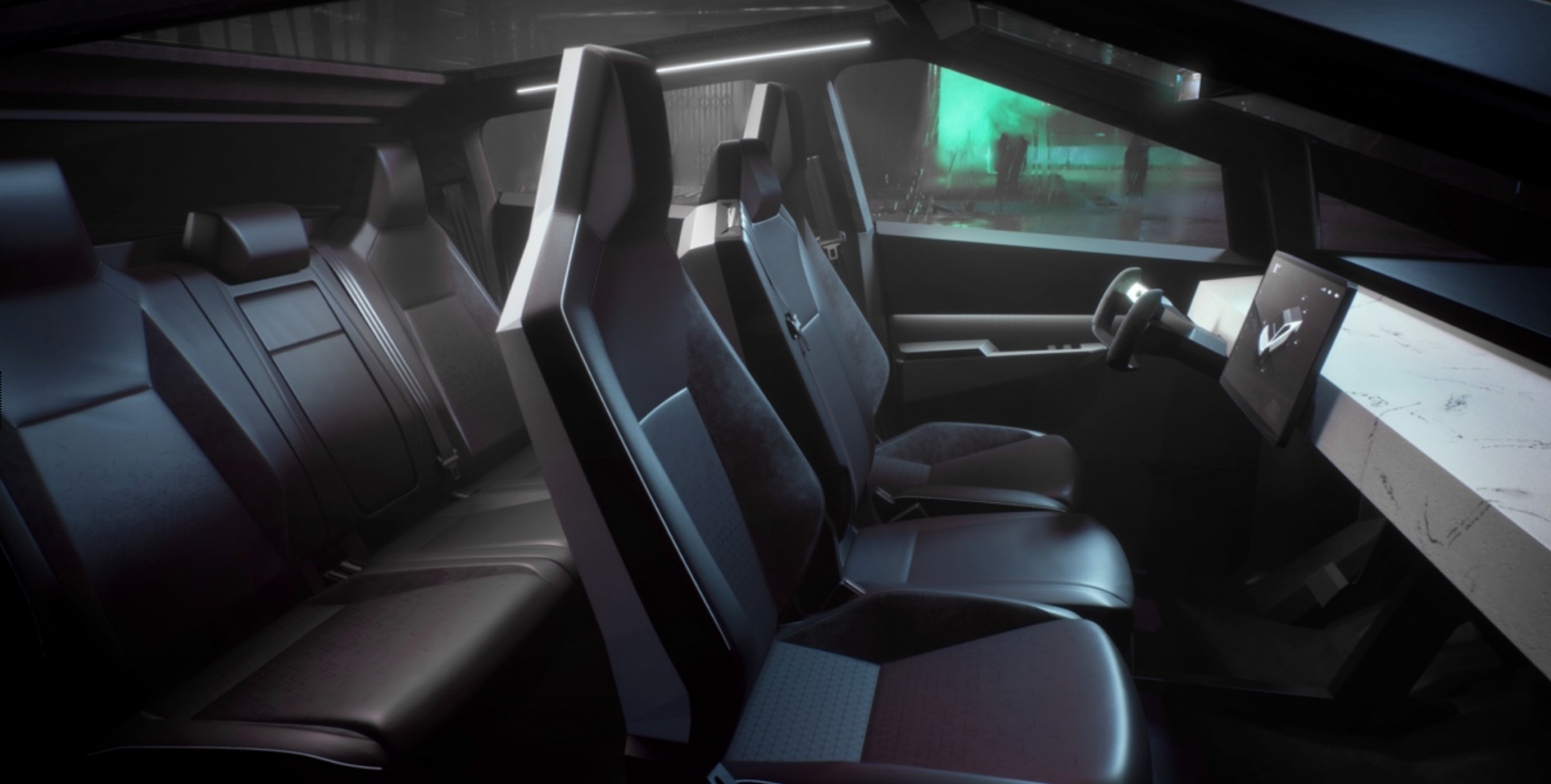 What’s your opinion of the Cybertruck? Do you think it will end up being “the official truck of Mars,” or is it too harsh on the peepers to ever take off as a mainstream vehicle? Give us your thoughts in the comments!