NASA’s Perseverance keeps providing incredible new ways for us to enjoy Mars. The rover has taken amazing pictures of the Red Planet. Including a few selfies. It has even let us listen to the wind sweep across those desolate plains. But that amazing machine isn’t up there alone. The Ingenuity helicopter is the first to ever fly on the planet. It been giving us up-close aerial looks at Mars. But the helicopter’s fourth flight has come with an extra bonus. Perseverance captured video of Ingenuity flying around, with audio. And it’s just the latest milestone for the mission.

NASA has released a video filmed by Perseverance on April 30. It shows Ingenuity soaring over Mars. More importantly is that you can also hear the helicopter’s blades spinning. The footage and audio is not only incredibly cool, it’s another historic moment for the crafts. NASA says Perseverance is “the first spacecraft to record sounds from another spacecraft on another planet.” A SuperCam Mars microphone on the rover captured the sounds. NASA then filtered them to isolate the audio we’re hearing. The space agency explained what they did in a press release:

“The audio is recorded in mono. Scientists made it easier to hear by isolating the 84 hertz helicopter blade sound, reducing the frequencies below 80 hertz and above 90 hertz, and increasing the volume of the remaining signal. Some frequencies were clipped to bring out the helicopter’s hum, which is loudest when the helicopter passes through the field of view of the camera.” 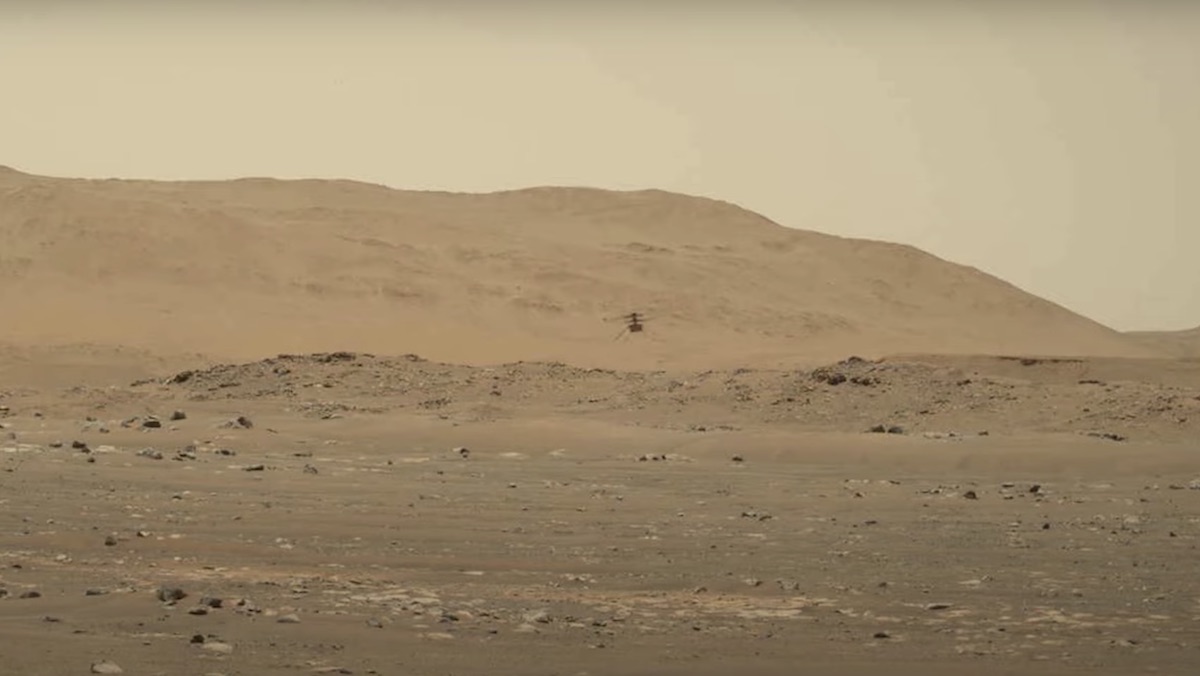 This recording was not guaranteed to work though. NASA wrote, “With Perseverance parked 262 feet from the helicopter’s takeoff and landing spot, the rover mission wasn’t sure if the microphone would pick up any sound of the flight.” Even with the blades spinning at 2,537 rpm, “the sound is greatly muffled by the thin Martian atmosphere.” The “wind gusts during the initial moments of the flight” also cause interference. We’re not the only ones geeking out over this.

“This is a very good surprise,” said David Mimoun, professor of planetary science at France’s Institut Supérieur de l’Aéronautique et de l’Espace and science lead for Perseverance‘s SuperCam Mars microphone, in a statement. “We had carried out tests and simulations that told us the microphone would barely pick up the sounds of the helicopter, as the Mars atmosphere damps the sound propagation strongly. We have been lucky to register the helicopter at such a distance. This recording will be a gold mine for our understanding of the Martian atmosphere.”

No surprise there. Everything about the Perseverance mission has been gold so far.