Some call him “ The Child.” Others call him “ The Asset.” We don’t care what anyone calls him though (as long as it’s not mean). “A rose by any other name would smell just as sweet.” Or in this case, a Baby Yoda by any other name would be just as adorable. All we care about is finally being able to get some official merchandise of the best little fella in the galaxy far, far away. Unfortunately, for the first—and likely only time—ever, Star Wars wasn’t ready to sell us all the merchandise we crave. Until now. Hasbro has announced a new line of Baby Yoda collectibles. And yes, he comes with his little bone broth bowl. 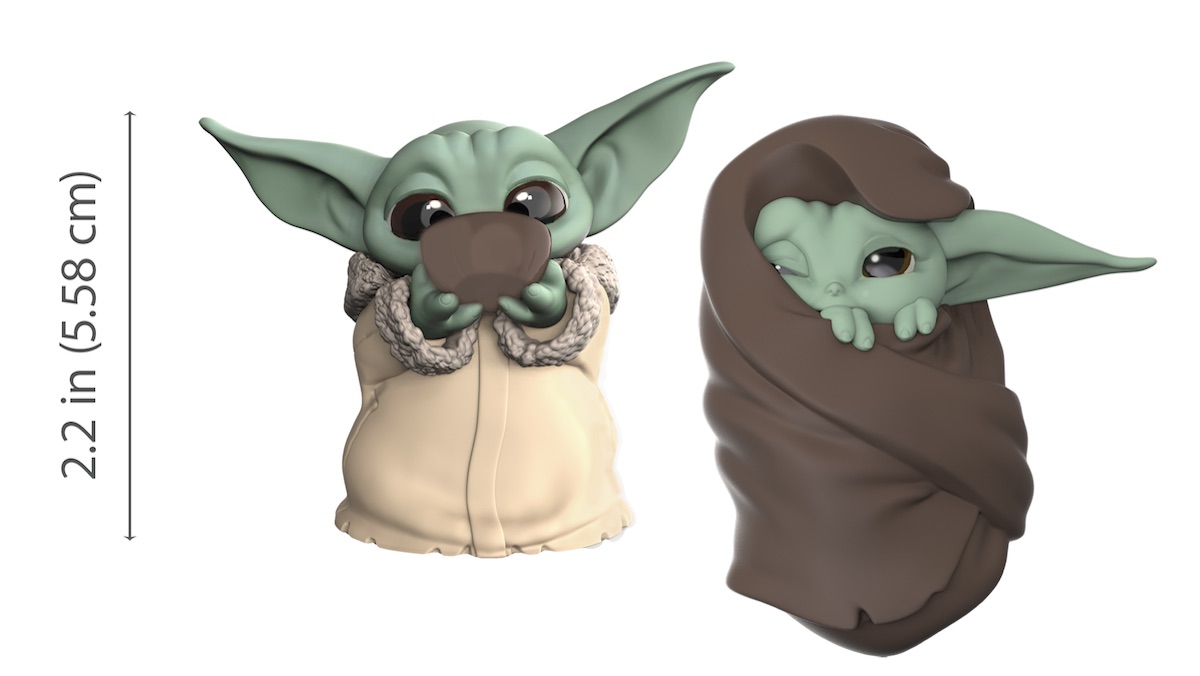 The Mandalorian‘s tiny breakout star and unifier of the Star Wars fandom is finally getting a full line of collectibles. Hasbro is now accepting pre-orders on four new Baby Yoda (or as they call him “The Child) toys. 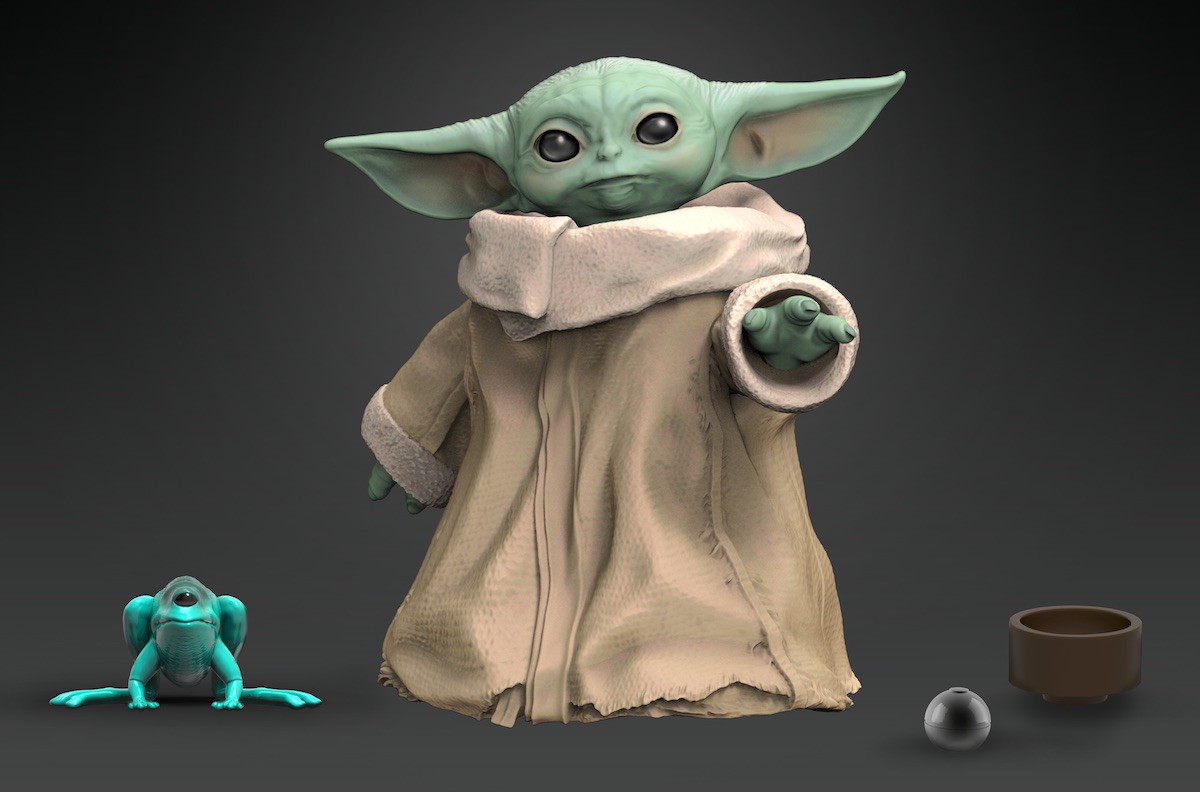 “Fans can add the pint-sized galactic sensation from the live-action series, The Mandalorian, to their Star Wars: The Black Series collections! The 1.12-inch figure is styled to look like The Child, with premium detail and multiple points of articulation. Includes figure, bone broth toy, ball toy, and Sorgan frog.” 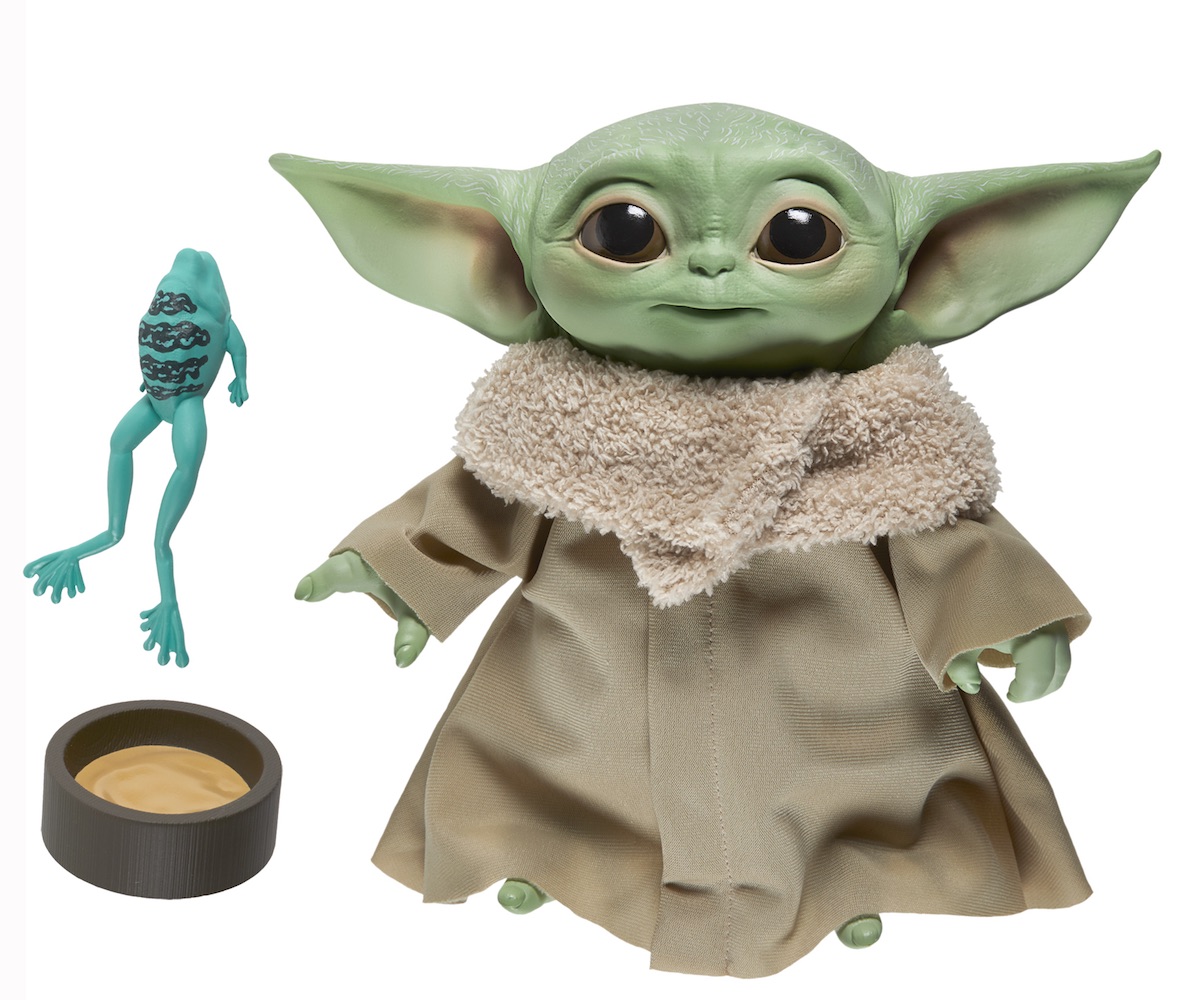 “Become the protector of The Child with this cuddly plush toy inspired by the live-action series, The Mandalorian, from Hasbro Star Wars, dressed in the cutest little robe ever seen this side of Mos Eisley. Posable arms let kids pretend the Force is within their reach, while a squeeze of the toy’s soft plush body activates character sounds! Includes talking plush toy, bone broth bowl, and Sorgan frog.” 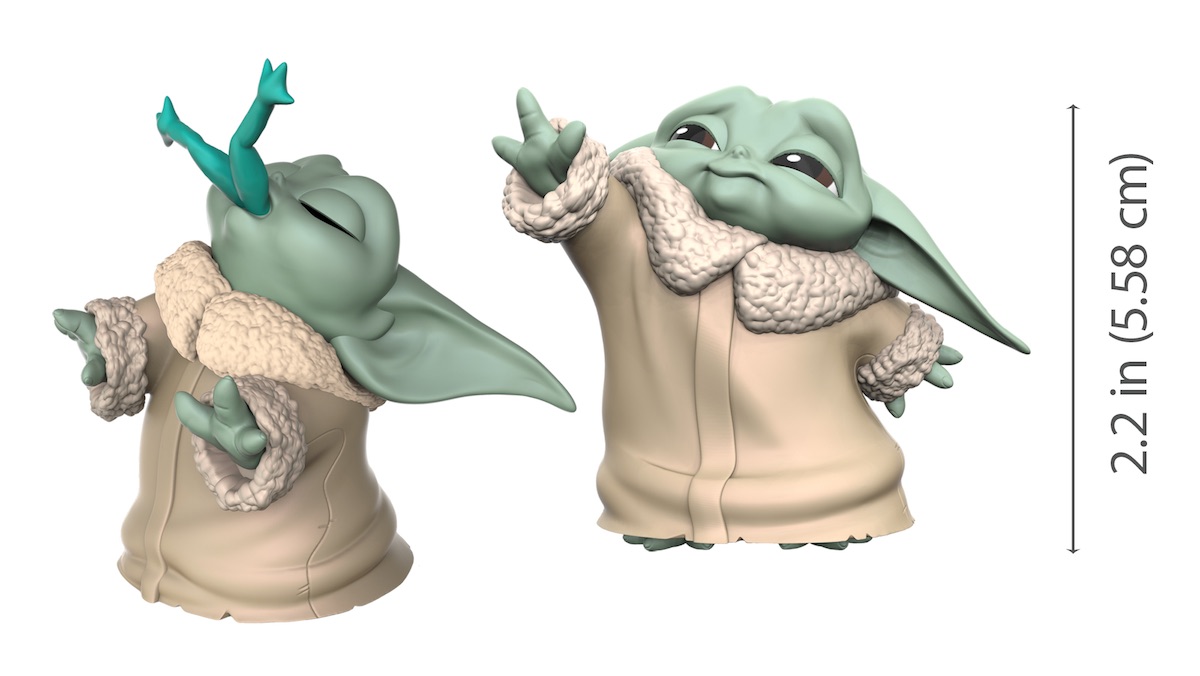 “Fans can start their own collection of this adorable character in poses inspired by iconic scenes from the live-action series, The Mandalorian! With six figures to choose from, kids and fans can collect figures featuring fun poses such as sipping soup and blanket wrapped, hold me and ball toy, and froggy snack and force moment. These 2.2-inch collectible figures are an awesome way to start a collection, swap with friends, give as gifts, or display in any Star Wars collection. For pre-sale these items will be offered as 2 packs for $15.99.” 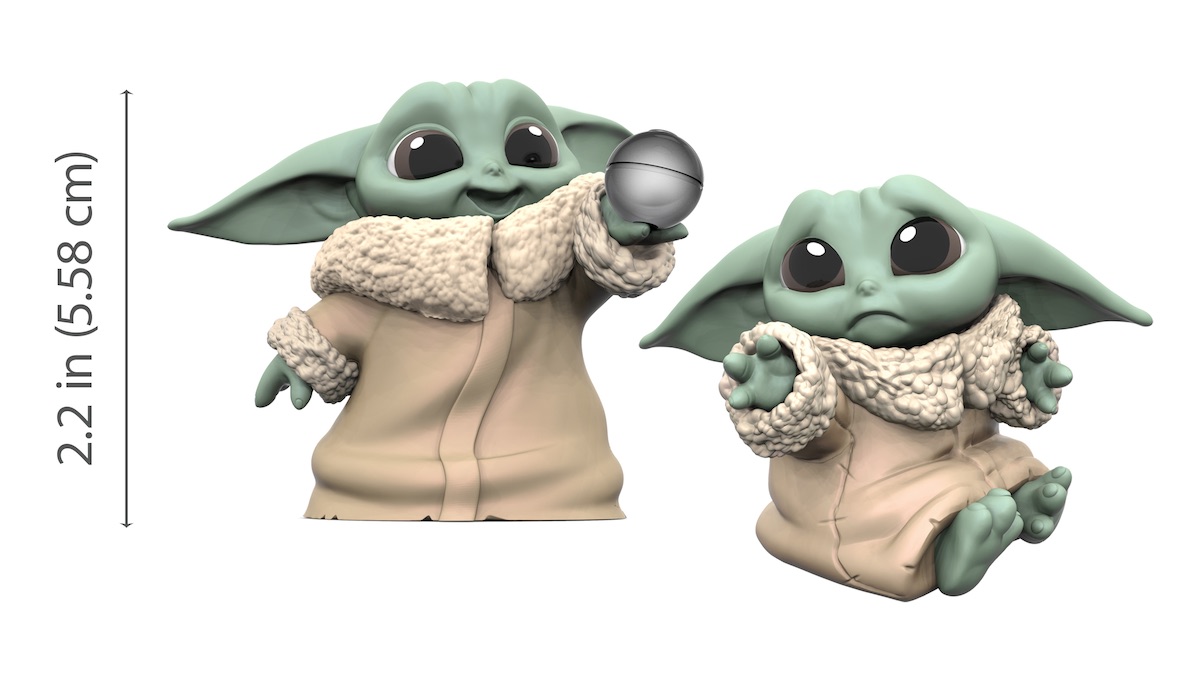 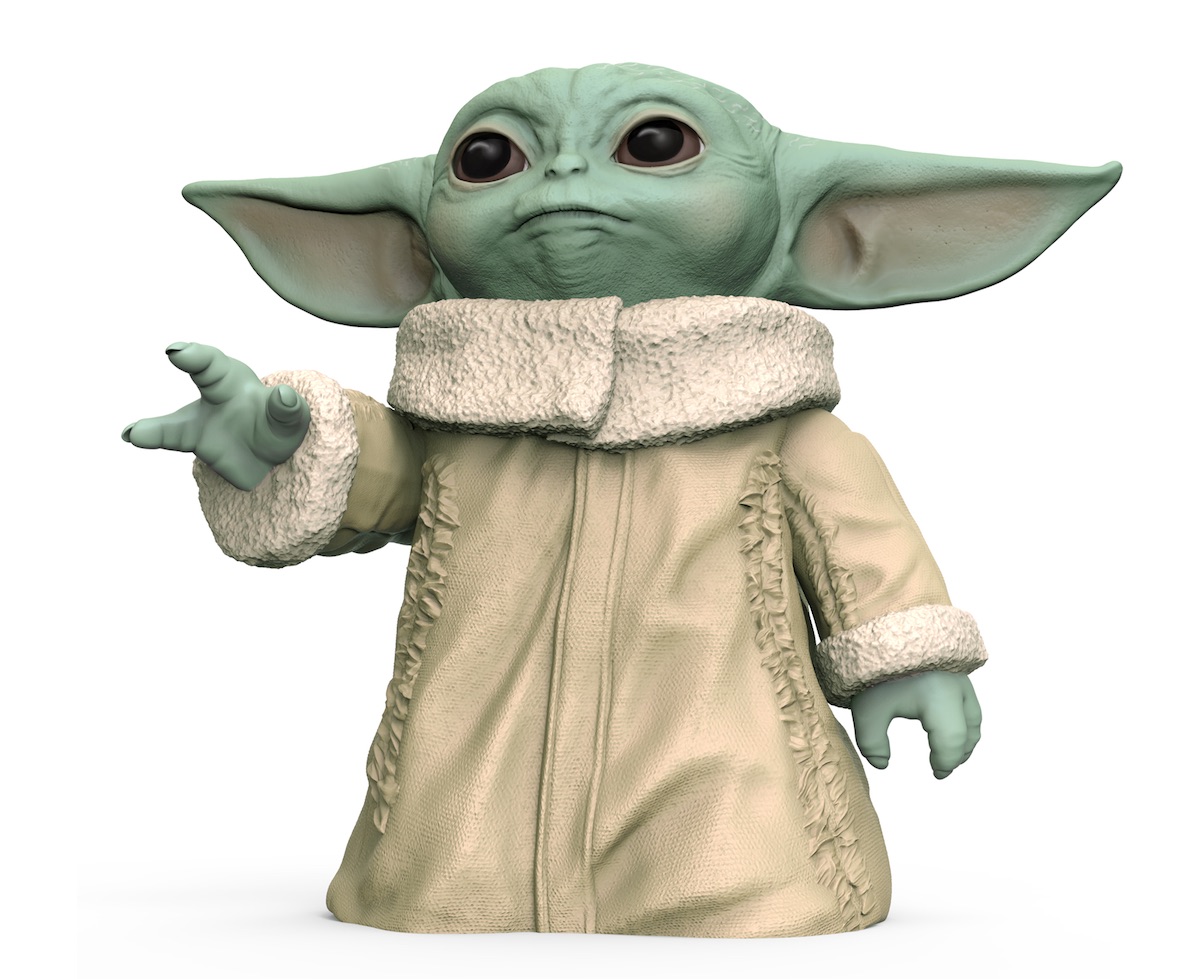 “Add huge fun to any Star Wars collection with this big The Child 6.5-inch figure! Featuring design inspired by the live-action series, The Mandalorian, and several points of articulation for big posable fun, kids and fans of all ages will love imagining favorite moments from the Star Wars galaxy!”

Our favorite is all of them. We must have all them. And we will.

The only downside is that we won’t have them until next spring. These collectibles won’t begin shipping until May of 2020. (Booo!) But if you want to make sure you get yours when they do, you can pre-order yours now at the following places:

May might as well be fifty years away at this point. By then Baby Yoda might even have his own name. But it won’t change what we call him—the best.