When Alex Winter and Tom Stern had their avant-garde script up for development by Joe Roth at Fox Studios they found themselves flung into making a $10 million counter culture movie that featured all their friends, creative collaborators, and seemed too good to be true. With the first rough cut filed and approved by Joe Roth, the pair was ready to expand with a bigger budget to polish their baby and a soundtrack that would feature Iggy Pop, Parliament Funkadelic, Henry Rollins, and even new tracks from Nirvana. But before that could happen, Roth left Fox and suddenly the future of Freaked was in question.

“It was devastating,” Stern told me over the phone. “Joe Roth was a huge fan of the film, he was ready to give us more money. This was really a film that they thought they were going to make money with. We were working on the edits and started to get our list of songs together for the soundtrack. But then he was gone.”

On his first day on the job, Roth’s replacement Peter Chernin was assigned his first task: to go and watch a test screening of an early rough cut of Freaked. “It was a disaster,” Stern laughed. “He was sitting right behind Alex and I in this theater in this mall on the outskirts of LA. And as soon as Brooke Shields came on screen at the beginning of the film, this kind of gangbanger kid in front of us stood up, like threw a gang sign, and said, ‘BITCH!!’ That was it, everyone’s throwing popcorn and drink cups and not paying attention to the movie. It was not a good screening and that was Peter Chernin’s first day and he was like, ‘You know what, I’m not releasing this movie.'”

Stern continued. “In Hollywood, it’s par for the course that when a new guy comes in, he’s not going to support the old guy’s stuff if he doesn’t think it’s going to be a slam dunk commercial thing. So he was not inclined to support the strange movie that just inspired an audience of young hoodlums to yell ‘BITCH!’ at the screen. So, you know, our fate was sealed.” 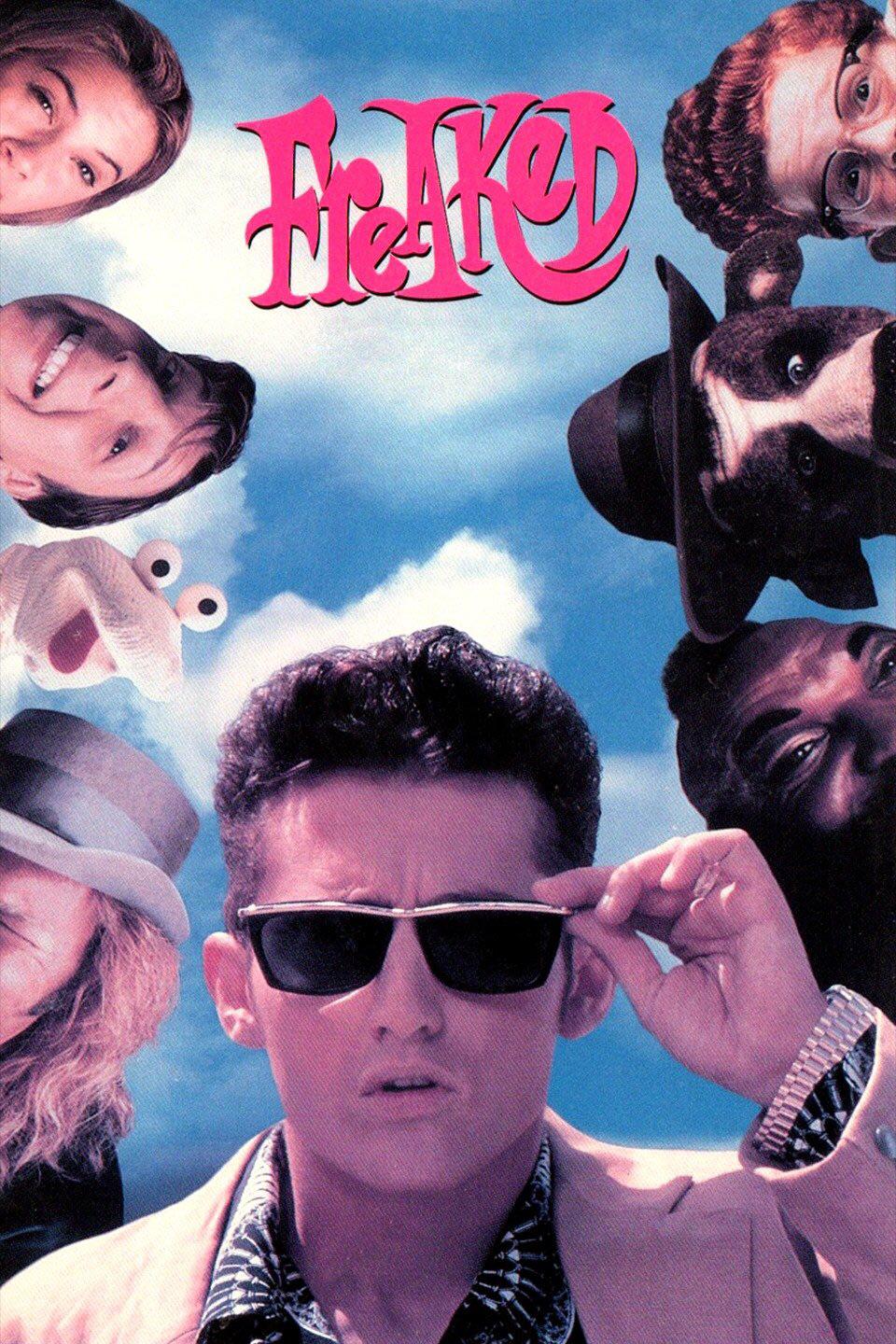 “It was kind of a strange thing,” Winter recalled. “The production process–the pre-production and the post–were so incredibly involved. In other words, the entire multi-year span of prepping this thing, making it and posting it, was ripe with so many complex problems because of the ambitious and kind of real time nature of it and the relationship at the studio had been so unbelievably enthusiastic and supportive. And not only that, but it was one of the sort of pet projects in town. People wanted to work on it, the buzz on it was really strong. The meetings that we had with composers would be the best composers, and the meetings we had with the photographers for the promos were about doing like giant fake GAP ads on 100 foot billboards all over the place. So there was an enormous groundswell of support.”

“Amidst the devastation of losing our release I don’t think either of us were that aware that the groundswell of support began almost immediately.” – Alex Winter

Despite the fact that Winter had experience on other bigger films like Bill & Ted and The Lost Boys, there was something about the production of Freaked that felt different. “They were very mainstream straightforward movies and there was a question of how will they do? We don’t know. While there certainly wasn’t the expectation of a big hit or big support, it was a pretty consistent kind of line in terms of what happened.” Even when the studio that made Bill & Ted went bankrupt and the movie was shelved for a year, Winter explained that there was an expectation that it would eventually be released. Freaked came with none of that. 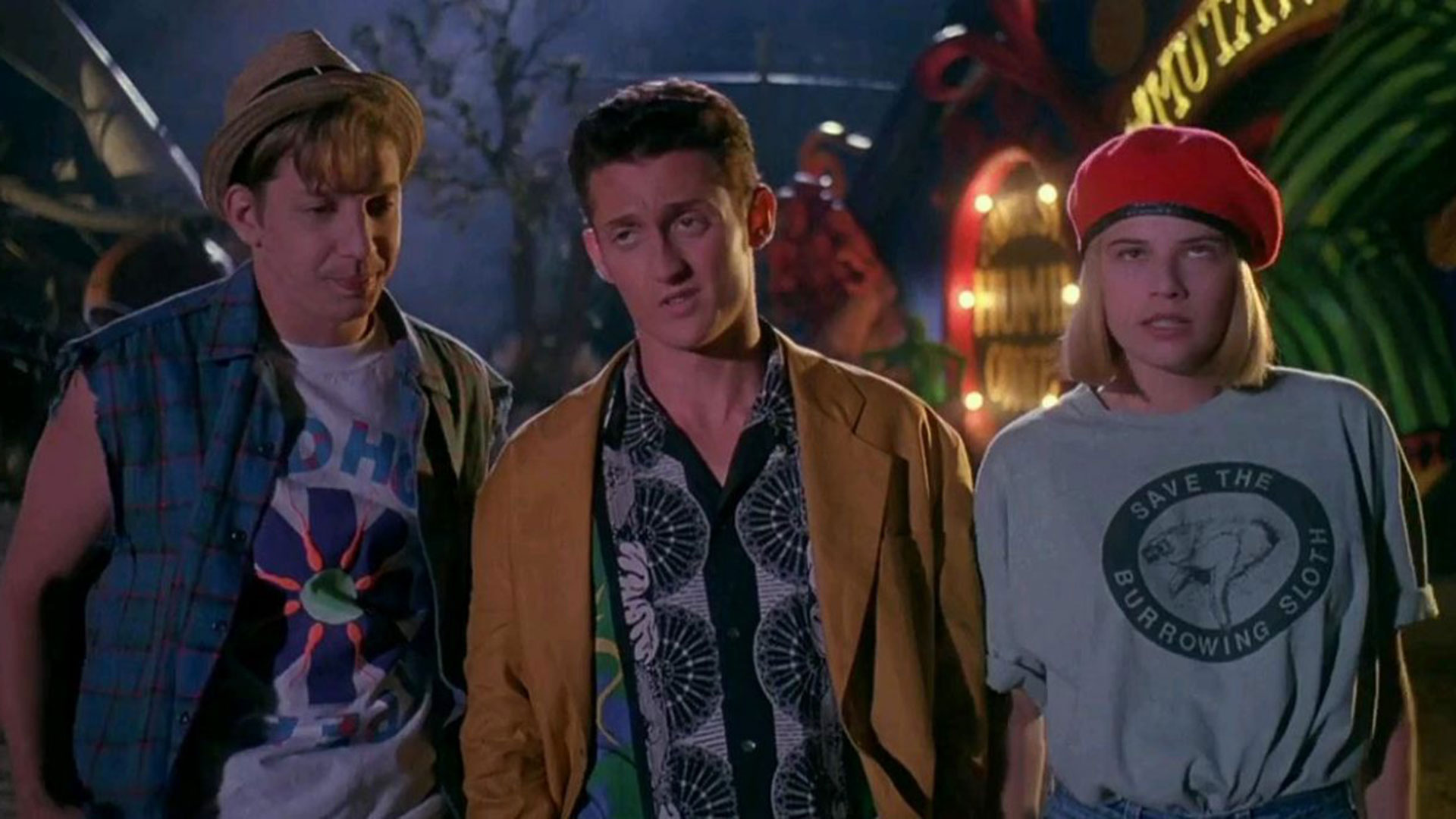 “There was always this kind of sense that we were getting away with something. And that at a certain point that the grown ups were going to, like, wake up and realize what we’d done and freak out,” Winter laughed. “Not to throw anyone under the bus but Joe leaving was even told to us in this very cavalier way. Some of the people who told us were like, ‘Oh, it’s just a little bump in the road.’ But I remember thinking, ‘Oh, we’re totally fucked.’ Like, now the grown ups are going to come in, and they’re going to realize we made this $12 million counter-cultural, rock & roll, punk rock movie with snot-oozing freakazoids and they’re going to shit the bed. And that is exactly what happened.”

With the studio no longer releasing the movie, Winter and Stern were adrift. Stern shared that the story of Freaked being pulled was deeply connected with his struggles with mental health and depression. But whilst the pair despaired, something was happening that would once again flip the script on the strange story of Freaked. “Amidst the devastation of losing our release, I don’t think either of us were that aware that the groundswell of support that began almost immediately.” 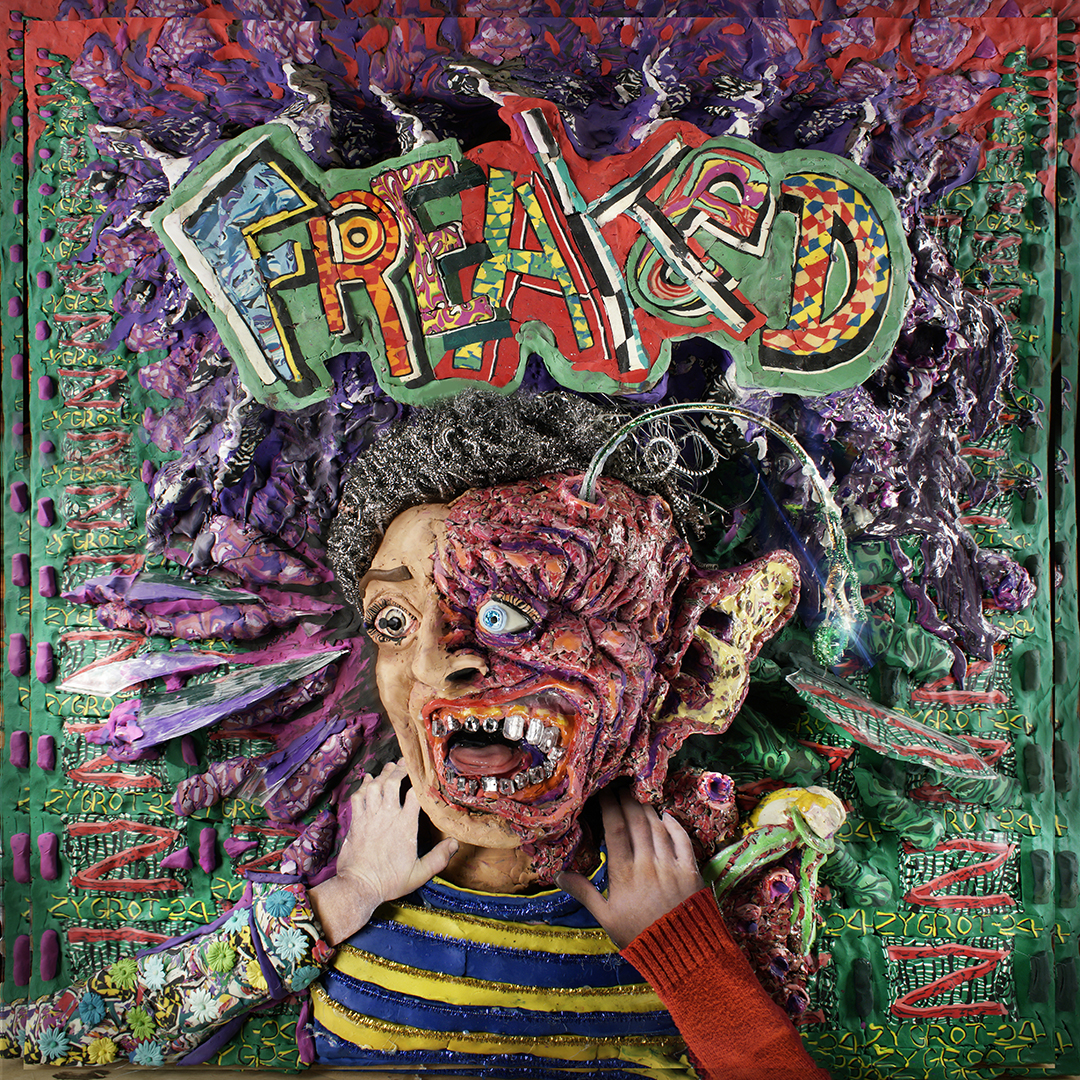 Winter continued. “We got shit-canned by the studio, and we put the film into the midnight screening at the Toronto Film Festival which absolutely flipped out over it; that screening was a huge success. There was an article in the LA times talking about whether Fox had screwed the pooch by not releasing it when it had so much support and love. And all of that was great but the reality for me and Tom was like, ‘How the hell do we get anyone to see this thing?'”

Off the back of the rave reviews from TIFF, Stern and Winter got a single poster and reel of the film from Fox and began to promote it themselves at local movie theaters. Whilst Winter was working in London he met a huge Freaked fan in the man who was running Fox UK, leading to a whistle stop tour of the British countryside. “This was back in the old days so I was meeting with exhibitors and DVD distribution companies and telling them that we would support the film. So it started to pick up some steam and then the movie being on HBO and Starz really put it out into the world. That’s how most people that I meet watched the movie, they saw it on cable and then in Blockbuster eventually.” 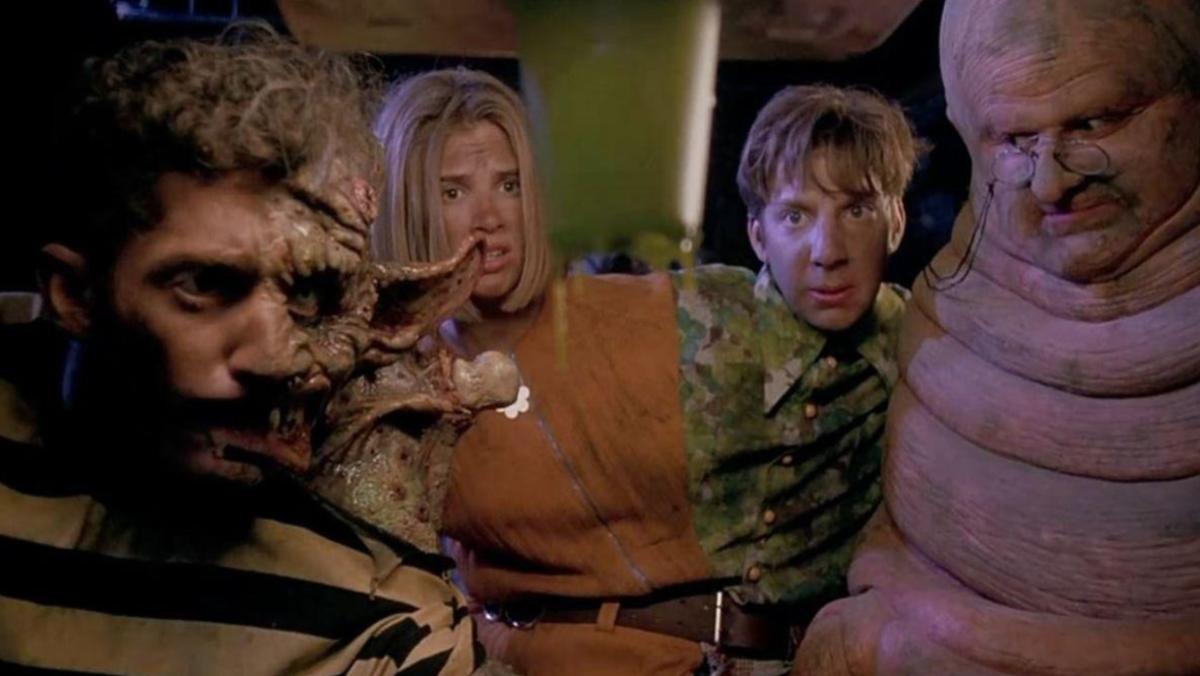 Winter continued. “So it was, you know, a slow roll that got us to to the Egyptian and having a full on sold out screening in a massive theater and getting a very face to face a sense of how much support there is for the movie.” After that resoundingly successful screening and retrospective of the film at LA’s Egyptian theater, what’s next for Freaked? Well, aside from taking the movie to London’s iconic rep theater, the Prince Charles Cinema, Tom Stern has one thing on his mind: making a new high quality transfer of Freaked. “The thing that’s terrible is there’s no good video transfer of the movie. It can’t really live in the world of Netflix and iTunes because there’s only a standard definition, very low resolution video transfer. So Alex and I are currently trying to persuade Disney to reach back into their negative vaults at Fox and do a proper transfer of the film.”

“I remember thinking, ‘Oh, we’re totally fucked.’ Like, now the grown ups are going to come in, and they’re going to realize we made this $12 million countercultural rock and roll punk rock movie with snot oozing freakazoids.” – Alex Winter

For Winter, despite the massive upheaval, perhaps in a way the strangest thing about Freaked is that it ended up being the film the pair had planned in the early days. “The transition back in the day was sort of watching it go from something that started as a very small grassroots thing to blowing up into this big Hollywood thing, to it basically going back to being what we originally had in mind. Thankfully, that’s a pretty cool outcome in a way because it could have been much worse. If we’d have been kiboshed midway through production, we wouldn’t have had the money to finish it, so in a way it worked out as best as it could have given what happened.”

The Freaked soundtrack is available for the first time in any format, on vinyl at Mondo Records. If you want to learn more about Freaked and the genesis of its iconic soundtrack then make sure you check out the Mondo Podcast with Stern and Winter!