BLACK WIDOW to Debut in Theaters and on Disney+ - Nerdist

BLACK WIDOW to Debut in Theaters and on Disney+

At 2019’s SDCC Marvel Studios panel, Kevin Feige officially laid out the plans for the next series of films and Disney+ shows through November 2021. The first film on the schedule is the solo outing for Scarlett Johansson’s super spy, Black Widow. Black Widow was originally supposed to premiere on May 1, 2020, kicking off Marvel’s Phase 4 slate. The film will officially debut in theaters and on Disney+ on July 9.

Who is in the cast?

As is the case with most MCU films, Black Widow has managed to assemble a pretty epic cast. David Harbour (Stranger Things) is playing Alexei Shostakov, also known as the Red Guardian. Florence Pugh (Midsommar, Little Women) is playing Yelena Belova, another famous Black Widow who shares a history with Natasha. O-T Fagbenle (The Handmaid’s Tale) is playing Mason. We have no clarity yet on which Marvel character that is, but he could be playing SHIELD agent Rick Mason. Rachel Weisz (The Favourite) is playing Melina Vostokoff, who is also known as Iron Maiden in the comics.

What is it about?

It was confirmed at SDCC that Black Widow is set after 2016’s Captain America: Civil War, when Natasha is on the run from the government following the clash over the Sokovia Accords. That will lead her to reunite with her “first family” (Yelena, Alexei, and Melina.) And she’ll attempt to wipe out some of that lingering red from her ledger in the form of her haunted past.

The footage shown at the Marvel SDCC panel hinted that this movie will center on Yelena, Natasha, and their oftentimes contentious relationship. Additional footage shown at D23 and the official trailer that debuted in December more or less confirmed this, with specific hints at how Yelena and Natasha will be teaming up to take down the Red Room. 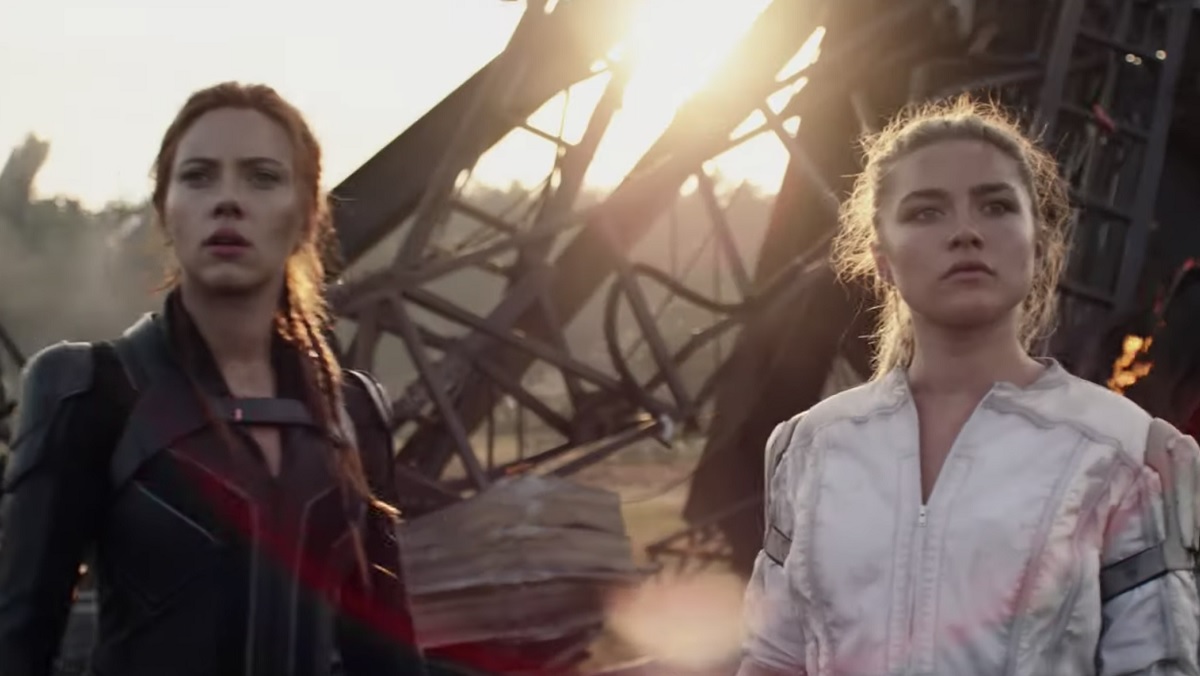 Taskmaster is shaping up to be Natasha’s ultimate foe. With a photographic memory that allows him to mimic anyone’s fighting skills by simply watching them, Natasha’s got her work cut out for her. She won’t exactly be able to best him with her Red Room trained skills. While we may not know exactly who is under the mercenary’s hood until the movie comes out, there are plenty of interesting options to theorize about.

Who is behind the scenes?

In 2018, Variety reported that Black Widow would be directed by Australian director Cate Shortland, best known for the 2012 indie film Lore and the 2017 thriller Berlin Syndrome. Jac Schaeffer and Ned Benson helped developed the story. Thor: Ragnarok screenwriter Eric Pearson wrote the script. In a featurette released in January 2020, we caught the news that Alexandre Desplat (Little Women) would be scoring the film.

Can we talk about the fact that Alexandre Desplat, aka Academy Award nominee for #LittleWomen, is doing the music for #BlackWidow? Because *chef’s kiss* pic.twitter.com/3zFedoALJn

But a post-production change in April revealed that Lorne Balfe had taken over musical duties on the spy film. Balfe is best known for action film scores like Mission Impossible — Fallout and Pacific Rim: Uprising.

When is it coming out?

After several delays due to the ongoing pandemic, Black Widow will now simultaneously debut in theaters and on Disney+ with Premier Access, which has a $30 rental fee, on July 9, 2021.