Join a Duel in This THE SWORD FALLS Excerpt - Nerdist

Join a Duel in This THE SWORD FALLS Excerpt

Author A.J. Smith’s next book will arrive to bookstores soon. The Sword Falls continues the Form and Void series, but you can also read it as a standalone. The sweeping fantasy book brings in classic sword and sorcery elements. The world that began with The Glass Breaks, which The Guardian describes as George R.R. Martin meets H.P. Lovecraft, expands here in The Sword Falls. Prince Oliver Dawn Claw, the heir to the Kingdom of the Four Claws, faces a threat while away from home. And meanwhile Adeline Brand is crushing resistance and taking on bigger battles.

The Sword Falls has a lot of moving pieces, and we have an exclusive excerpt to share from the upcoming title. 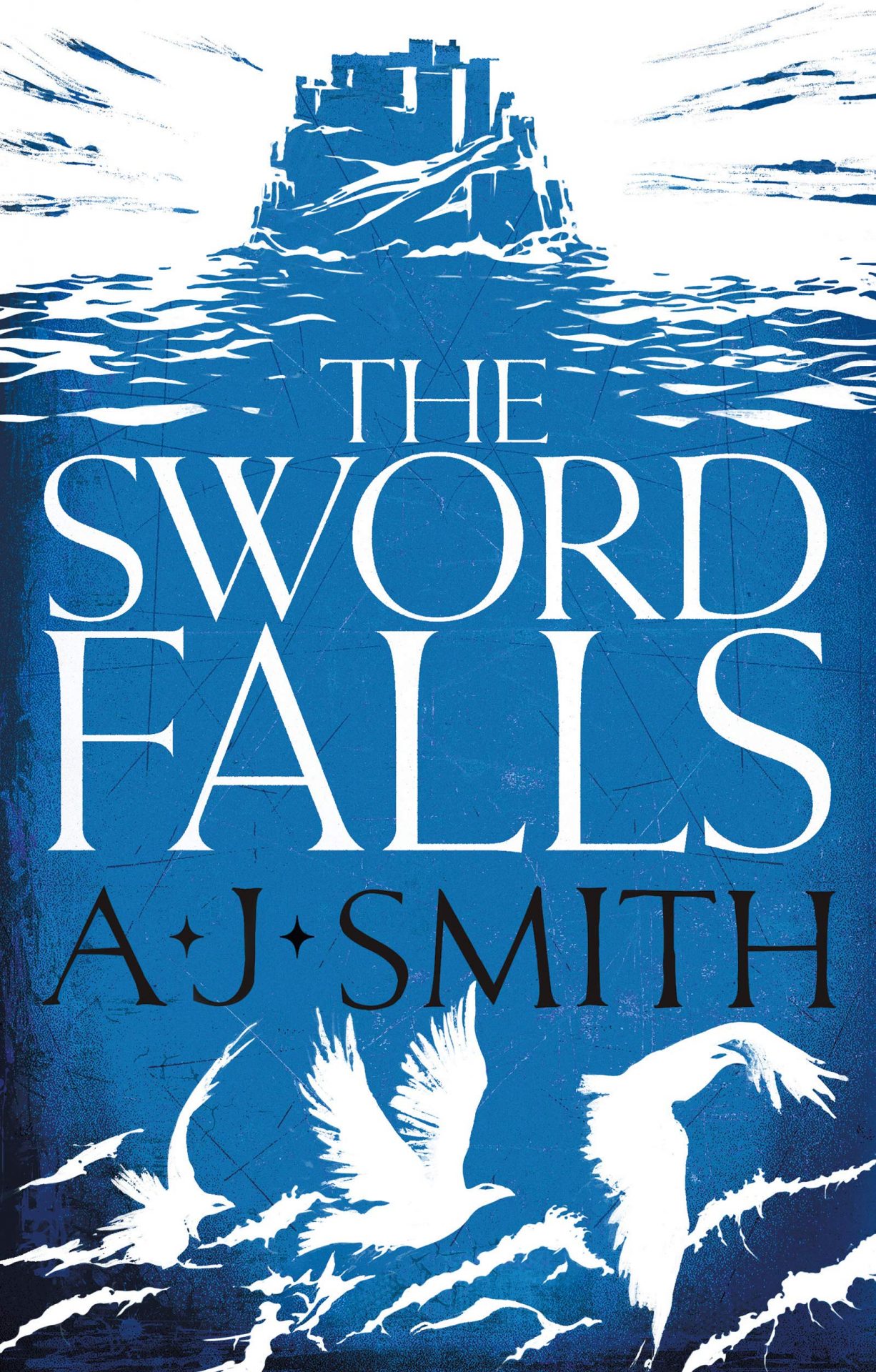 The below passage from The Sword Falls does not mess around. It throws readers right into a duel with Lord Ulric Blood, First Fang of the Sea Wolves. That name is not the name of someone you want to mess with. But Adeline Brand, a.k.a. the Alpha Wolf, doesn’t care. The raw aspects of the duel come through the text for a gripping experience, even separated from the rest of the book.

The man was larger than me. He was also stronger, older and far more experienced. He had two arms to my one, and in each of his hands was a blade. He wore a waistcoat of leather armour, fastened at the side with steel buttons, and moulded to his huge torso. His long, muddy blonde hair fell in matted-tangles past his shoulders, and his pale, streaked face was dominated by a ragged, unkempt beard. Deep within his bloodshot eyes I saw churning rage, and barely-concealed obsession, like his mind was focused on a single point, and would not be moved. He strode towards me, across the stone of Duellist’s Yard, with thousands of eager spectators encircling us.

The man was Lord Ulric Blood, First Fang of the Sea Wolves and elder of the Severed Hand, and I had to kill him. I didn’t want to. I wanted to see him as I had always seen him – as every Sea Wolf at the Severed Hand saw him – as a leader, a champion, a man of honour and respect, and the symbol of our might. But he had fallen far in a short time, and we no longer needed a symbol. And I would no longer follow a leader. No gods, spirits or men held dominion over me. I was Adeline Brand, called the Alpha Wolf, and I spoke for the Old Bitch of the Sea.

People hung out of windows, clambered up shop fronts, sat on roofs, and squeezed into every conceivable space, just to watch us fight. It felt like a theatre, or some kind of Winterlord coliseum, with everyone fixated on a single, circular piece of stone ground. For the first time in the Severed Hand’s history, a railing had been erected in Duellist’s Yard, keeping spectators away from the fight. But the space was wide, with more than enough room to kill a broken old fool.

The only other Sea Wolf within the barrier was Tomas Red Fang, the elderly spirit-master, who had stubbornly refused to accept that one of us needed to die. He stood in the middle of the circle, between Ulric and I, giving no indication that he intended to move.

I advanced with the First Fang, and we came together either side of the spirit-master. My cutlass was still in its scabbard, though I held the basket-hilt, and could draw it faster that Ulric could strike. The stump of my left arm glowed a subtle blue, and I could extend a limb of wyrd when needed, but I faced the challenge as a one-armed woman, refusing to show fear of the enormous man I had to kill.

Neither of us were looking at the old man, and his words would have fallen on deaf ears a week ago. Now, they were almost funny, as if the punchline of a morbid joke.

“We should remember who we all are,” continued the spirit-master. “And what we share. We share a broken hold and a broken people.”

He looked upwards, away from the stone of Duellist’s Yard, and focusing our attention on the one thing that mattered more than our duel. I gulped, following his gaze, as did Lord Ulric. Around us, thousands of eyes looked up, and beheld a jagged tear in the sky. The glass had broken and no amount of spirit-craft could fix it. It was a gaping wound in the realm of form, its edges flapping in the wind, like a piece of torn cloth. Each afternoon the hold entered a sudden twilight as the sun passed behind the tear, emerging as a muddy silhouette on the other side. The darkness didn’t last long, but the entire hold showed collective relief when the light returned.

“Look at it,” snapped Tomas. “Both of you, look at it. That’s the void. It’s a daily fight to keep the spirits back. The Severed Hand is broken, and you two killing each other won’t repair it. Nothing will repair it.” He turned his eyes to Lord Ulric. “Taking a thousand warriors to retake Nowhere won’t repair it.” Then he glared at me. “Neither will sacking the Bay of Bliss. You each have your reasons, but your people need you… they need you both.”

I faced Tomas. I had affection for the old man, but his summary was flawed, perhaps deliberately so, in an effort not to reignite unpleasant or maddening memories. For Ulric and I were both burdened with them. For an instant, a memory overtook me and my thoughts left the Severed Hand. I returned to a waterlogged stone chamber at the Bay of Bliss, where I’d been a helpless prisoner of the Sunken God. I’d been robbed of my wyrd, and cast before a grotesque creature, with greasy black eyes, a bulbous, frog-like body, and the vilest of intentions. A Sunken Man… a creature of legends and nightmares, four times my size, but merely one of many, skulking in the fetid waters of the Bay of Bliss, waiting for their god to rise and lead them against the Eastron. They’d already sent their chaos spawn to break the glass and annihilate the Sea Wolves.

Ulric’s torments were more temporal, though no less important in his mind. He could not see past the death of his son on the island of Nowhere, and would throw steel at the island until there was nothing left to throw. The actions of Marius Cyclone, and the void legionnaires who held the island, had infected the mind of the First Fang until he couldn’t see beyond his own vengeance. Someone had killed Vikon Blood, and someone needed to pay. That was all his mind would allow.

“Ulric Blood!” I roared, sick of delaying the inevitable. “I name you broken, short-sighted old fool. Answer me!”

“Adeline Brand,” he replied, in a barely-audible whisper. “I name you traitorous bitch. Answer me.”

Tomas retreated, and Duellist’s Yard held its collective breath. There was a respectful pause, with Ulric and I locking eyes. I’d known him as long as I’d known anyone, and I’d looked to him as my First Fang since I took the rite and became a Sea Wolf. In the depths of his deep, blue eyes I saw the man I’d once known, and I saw a willingness to die. Lord Ulric Blood, First Fang of the Severed Hand, would never submit, never retreat, and never accept the death of his son. Was it possible for a man to know he was going mad and invite an honourable death? I hoped so.

He attacked first, summoning a restrained amount of wyrd into each arm, and striking with both blades. I gave ground, deflecting one strike while side-stepping the other. With a remnant of the Old Bitch of the Sea infusing my wyrd, I was far quicker than him, but still not immune to blades. With his strength advantage, a single cut could be fatal. But I didn’t receive a single cut. I danced around his brutal strikes, using minimal wyrd to slap away his blades with my own. My spectral arm acted as a second cutlass, able to repel steel with a crack of pale-blue light. I was more powerful than him, and that became more and more obvious with every swing of his twin blades.

“Enough of this,” I shouted, breaking Ulric’s guard with my spectral limb, and delivering a fatal thrust to his heart. My blade sliced smoothly through his breastplate, and into his chest. I’d killed the First Fang of the Severed Hand. I felt his bones, his flesh, and his blood. I stood over him, with time slowing to a crawl, and was amazed at how simple it was to kill so mighty a man. His weathered face slowly fell into a blank stare, and though I wished for some last words, there were none. All he left me with was the smallest of smiles. Or perhaps the slight curl of his lip was something else. “I’m sorry, Ulric,” I whispered, cradling his huge body to the stone of Duellist’s Yard. “But your time has passed.”

Excerpted from The Sword Falls by A.J. Smith. Head of Zeus, 2021. Reprinted with permission.

The Sword Falls goes on sale on May 1. You can place a pre-order now.