The SUPER POWERS Era Was DC Comics at Its Most Iconic

With the upcoming Flash movie, DC Films are rumored to be soft rebooting their entire universe. What this means for the Justice League as a franchise remains to be seen. But maybe the title “ Justice League,” with all the drama and toxicity surrounding it these past four years, needs to rest for a while. Meanwhile, there’s a great period from DC’s past that has the perfect feel for what the DCEU should look like… and it’s just waiting to be exploited. We’re talking about the Super Powers toy, merchandise, and cartoon branding from the mid ’80s.

From 1984 to roughly 1987, the Super Powers Collection was a DC Comics line of action figures from Kenner Toys, home of Star Wars. It featured the DC heroes in their most iconic incarnations, with classic villains getting cool new modern upgrades. Aside from the figures, there was also a metric ton of merchandise. And the long-running Super Friends cartoon also got a Super Powers makeover. While the stories for Super Powers were simplistic by modern standards, their colorful aesthetic and emphasis on fun adventure and pure heroism feel exactly like what the DCEU needs today. But before we get into how Super Powers can inspire the future, let’s take a deep dive into its history.

The Genesis of the Super Powers Collection 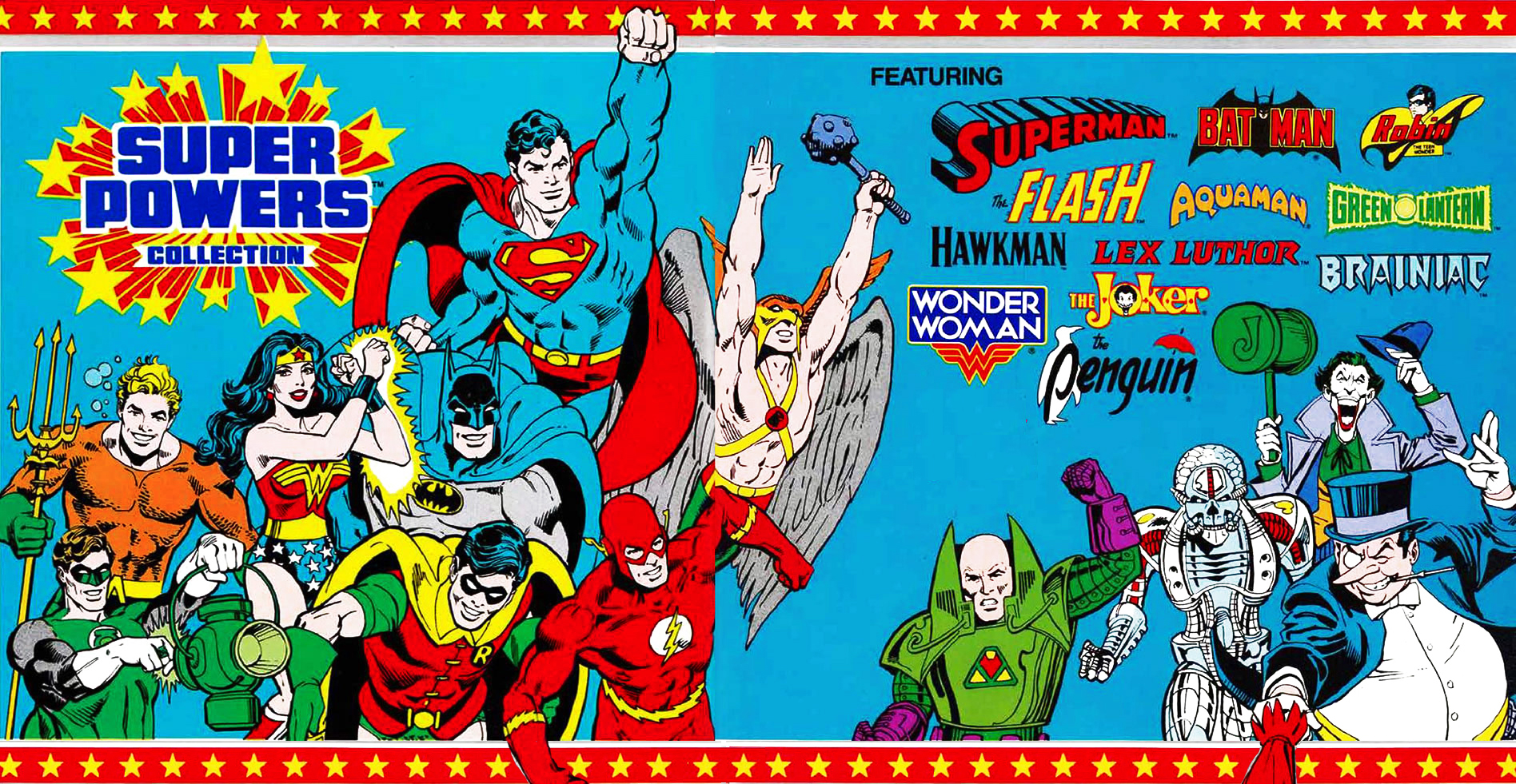 As completely mind-boggling as it might seem today, in the 1970s, DC and Marvel shared an action figure line together. From 1972 to 1981, the Mego company released The Word’s Greatest Superheroes 8” figure line. The line featured characters like Superman, Batman, Spider-Man, and the Avengers sharing space together on toy store shelves, not to mention ads on TV. The line was extremely successful, but eventually, Mego hit a rough financial patch. In 1982, the company went bankrupt.

At the same time, the action figure market exploded thanks to the success of Kenner’s Star Wars. In the fallout of Mego’s dissolution, DC and Marvel became separate licenses. Marvel eventually went to Mattel, where the heroes populate the Secret Wars line of figures. But Mattel was focused on their mega-successful Masters of the Universe toys, and so Secret Wars suffered as a result. The first Secret Wars wave sold poorly. It received a smaller second wave, then vanished from toy shelves.

Meanwhile, Kenner Toys picked up the DC license in 1983. This is right as their Star Wars line of figures was winding down after the release of Return of the Jedi. This allowed them to properly focus on their new line of DC heroes. Instead of calling the line Justice League (or Super Friends, like the popular cartoon), Kenner went with the name The Super Powers Collection. This name was meant to trigger the power fantasies of young boys, and it worked. The fact that each figure had a “power action” feature—like punching (Superman) or running (Flash)—was fantastic for playability too. Marvel might have been far more successful in comics sales than DC at the time, but Super Powers totally trounced Secret Wars.

DC’s Heroes at Their Most Iconic 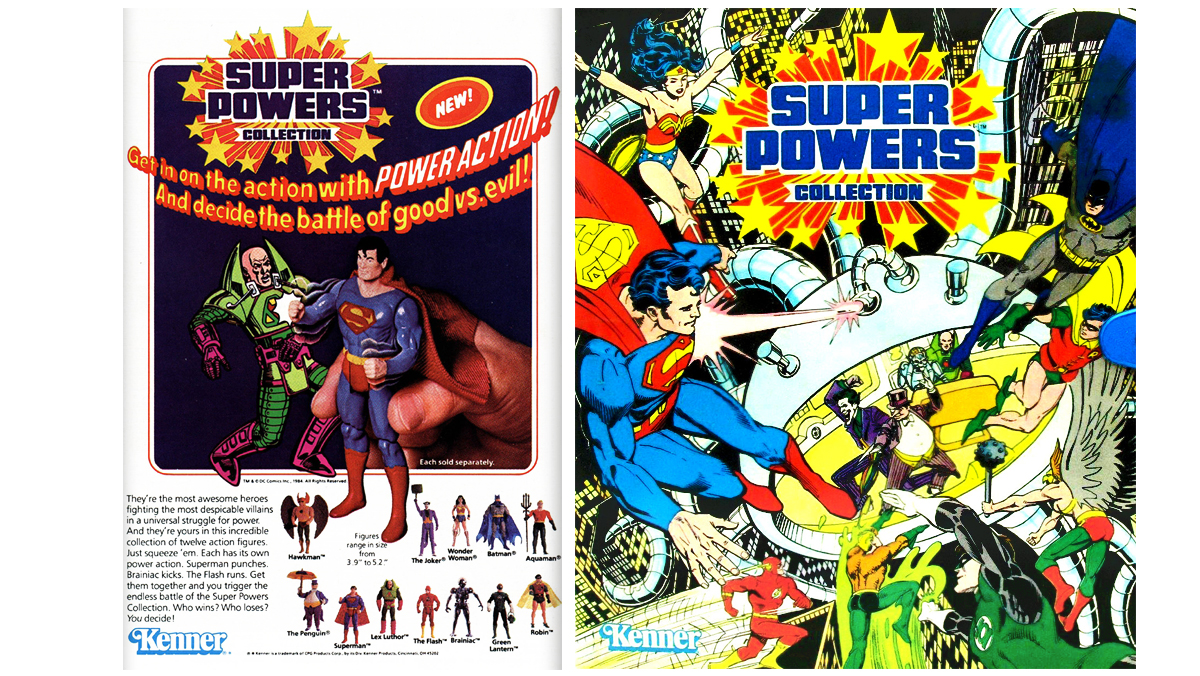 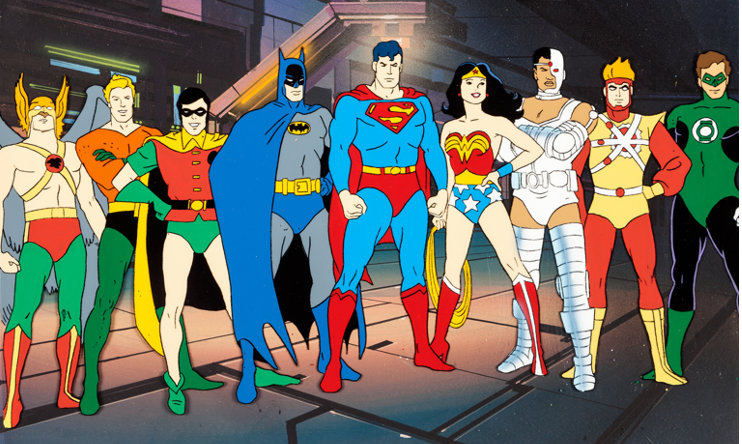 The first wave was a big success. Year two saw a wave that added even more iconic DC heroes, as well as Darkseid. All the New Gods characters became the primary villains for the DC heroes. Their creator, the legendary Jack Kirby, was hired to redesign them for the toy and product line. The second wave also saw the release of the Hall of Justice playset, which was based on the JLA’s headquarters from the Super Friends cartoon series. That very same cartoon series got a rebranding tying into the toys. So many key elements from DC’s history in comics and TV came together perfectly for a product line that celebrated everything appealing about these enduring characters. 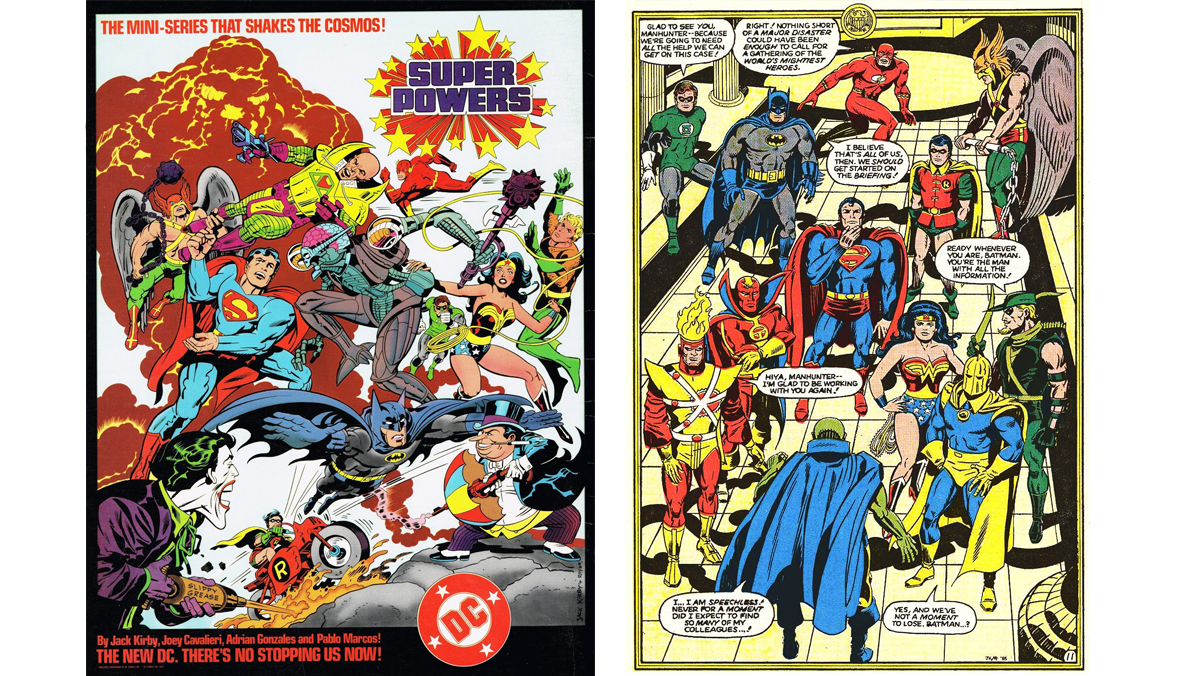 Super Powers was bright and vibrant, with clear-cut heroes and villains. Since the look of the characters was straight from the DC Style Guide, all the heroes appeared just like their most well-known incarnations from decades of comics. Super Powers was the overall DC product branding for three years, and was all over everything from lunch boxes to pajamas to school supplies. Book and record sets, coloring books, stickers, “Choose Your Own Adventure”-style novels, and literally dozens of other products came later. If you were a kid in the ‘80s, chances are Super Powers was your introduction to DC’s characters. 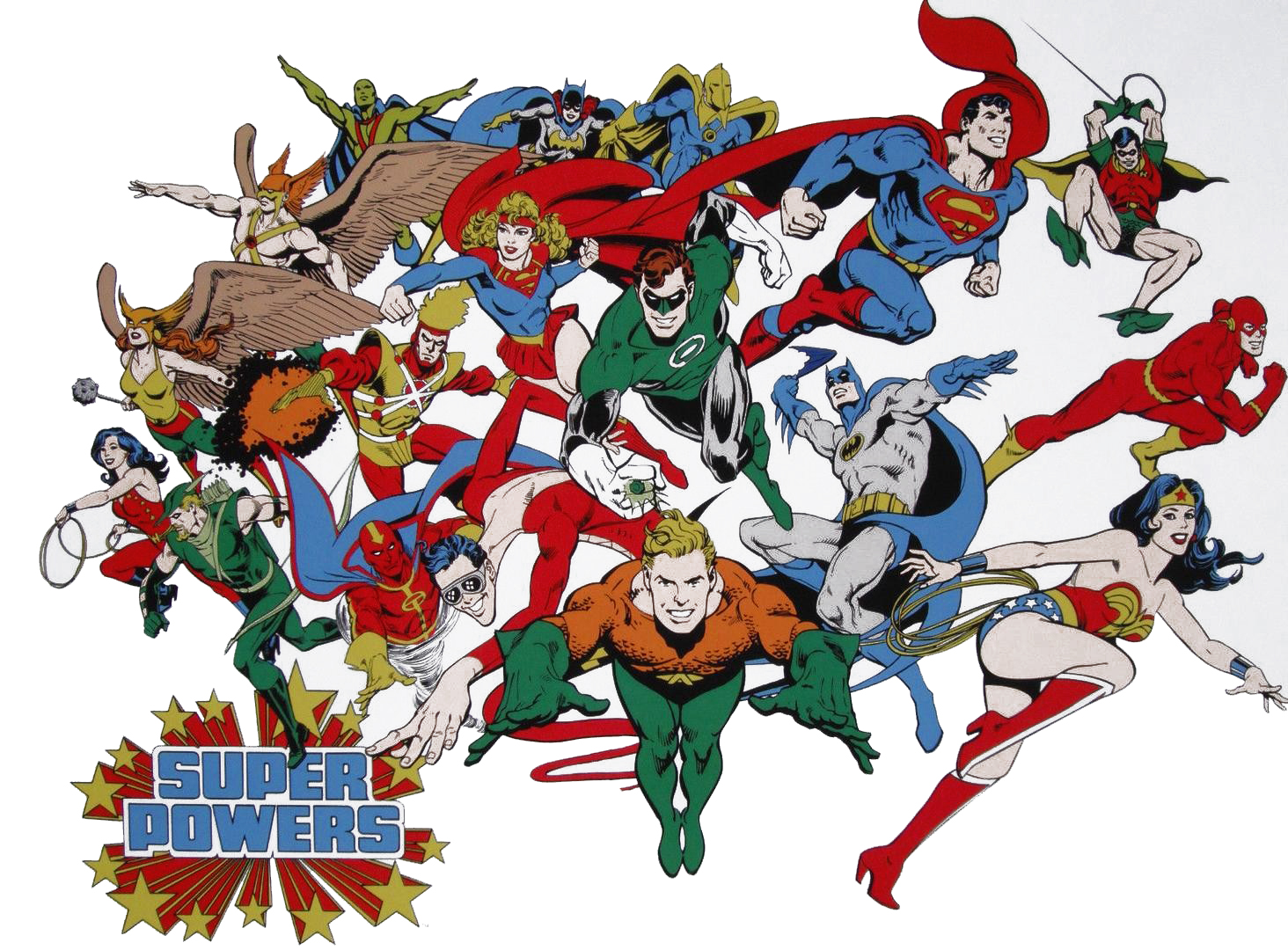 Most action figure lines back in the ’80s lasted a couple of years max. Long-running lines like G.I. Joe and Transformers were outliers. Even Masters of the Universe, a billion-dollar brand, only lasted five years. Super Powers lasted three, which isn’t bad at all. They could have lasted longer, but they made some key mistakes. For starters, they had only one female figure in the entire line: Wonder Woman. And they basically hid her, as she didn’t appear in any ads for the toys.

By the time they got to wave three, Kenner began making up characters whole cloth, like Golden Pharaoh and Cyclotron. This was instead of including famous female heroes from the comics, like Black Canary, Supergirl, Batgirl, or Catwoman. Interestingly, those female characters appeared in Super Powers merch regardless. But sexist attitudes of the era only allowed for one girl in the boy’s club at a time. With several lame choices for characters in the last wave, and no new cartoon episodes to support the line, the Super Powers Collection disappeared off toy shelves in 1987.

The Legacy of Super Powers 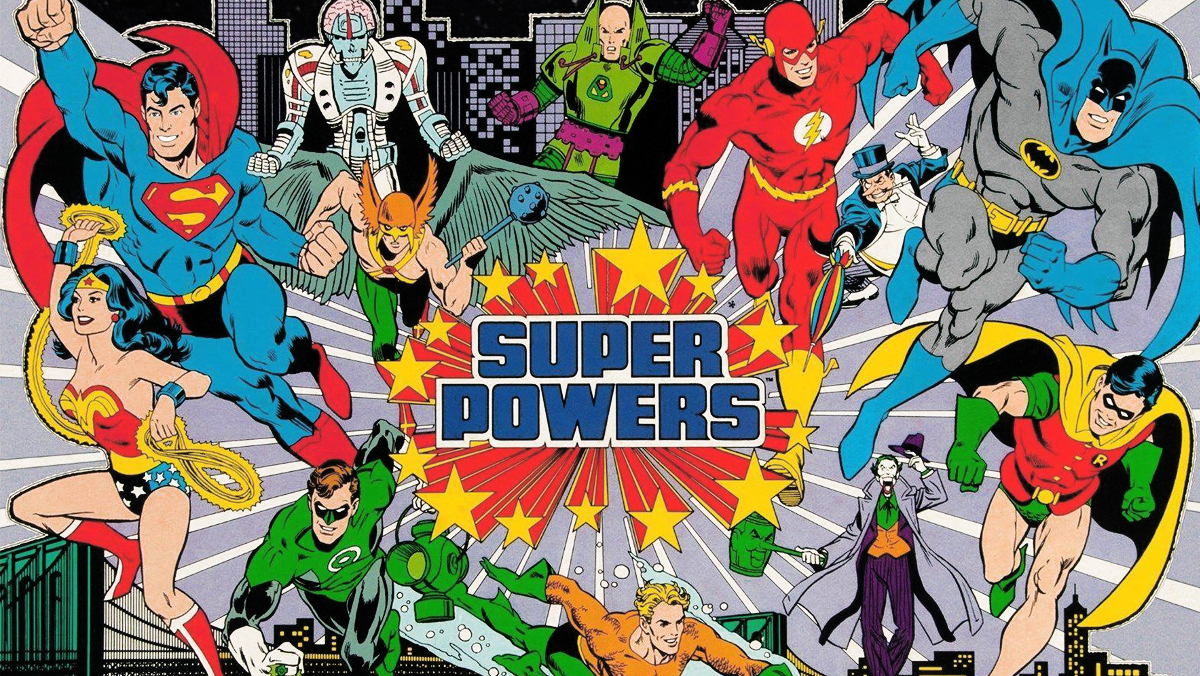 Despite only a brief few years on the market, Super Powers has had a long-lasting effect on the DC brand. DC Comics updated their popular heroes after the 1985 event Crisis on Infinite Earths, yet the classic looks of the characters from the Super Powers era continued to show up on random merchandise for decades. Heck, if you walk into a big box chain store right now, chances are you can find a T-shirt with the Super Powers iterations of the Justice League, and the old starburst logo.

DC published three Super Powers tie-in comic series as well, with Jack Kirby himself supplying artwork. It was the only time Kirby ever drew the Justice League characters in his whole career. The comics showcased Darkseid as the JLA’s primary antagonist. Although the Lord of Apokolips has fought the JLA a couple of times before, it was Super Powers that solidified the character as the “big bad” of DC’s primary heroes. This would seep into the mainstream comics line, and eventually, future animated series and live-action films. DC might have attempted to get edgier as the years rolled on, but the impact of Super Powers’ straightforward all-ages aesthetic was hard to escape.

The Blueprint for a Justice League Reboot

So how could this relic of a bygone era inform the modern DC films? It’s not any one story from a cartoon or comic (which were, to be fair, aimed at little kids). It’s the overall positive and colorful vibe that Super Powers creates. The heroes and villains are well defined. The good guys are brightly hued and aspirational; and the villains just look cool. And most importantly for something based on DC heroes, kids can enjoy it. This is crucial.

Instead of calling a future film Justice League II, why not simply call it Super Powers? Use as much of the iconography of the line as possible without falling into camp. If Marvel Studios can juggle the number of characters that Infinity War and Endgame did, why can’t there be a Super Powers film showcasing the JLA versus the Legion of Doom and Darkseid? The vibrant branding and aesthetic of Super Powers once sold millions of toys. Don’t tell us something inspired by it can’t sell a movie. 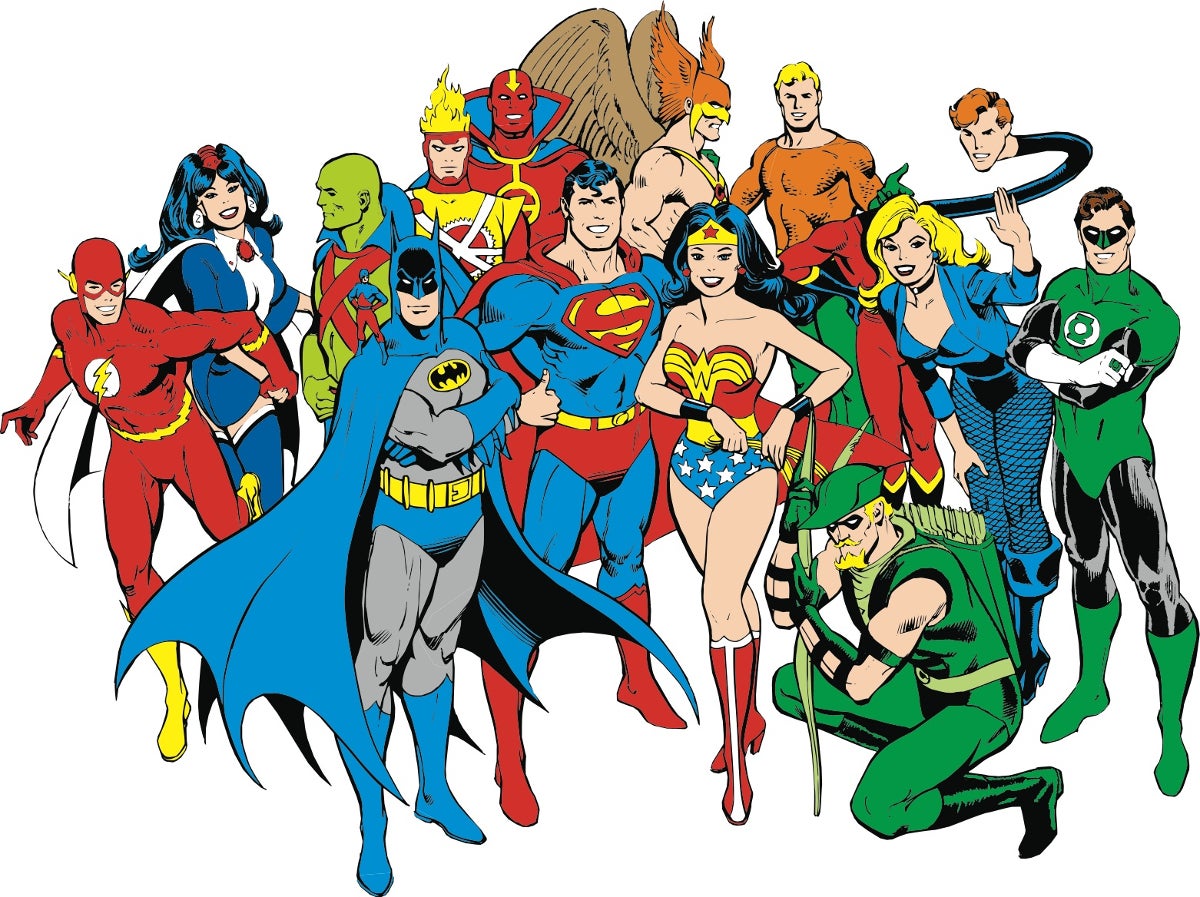 Whatever Warner Bros. and DC decide to do next, looking to Super Powers for inspiration might be the best way to give the live-action Justice League a shiny new lease on life. The classic line of toys and merch continues to be beloved for very good reasons. And as an antidote to all the darkness in the world, maybe what we need is a little pure dose of Super Powers truth and justice right about now.