Look, we’re all in the thick of it now. It’s a lot of worrying and fear and isolation and cabin fever. All in service of making our communities safer, by the way. It just doesn’t make the act of sitting alone for days on end any easier. We have plenty of movies to watch, of course, and that does help. Still, for those of us who relish the communal act of watching movies in a theater with a big crowd, this stings. So maybe it’s the perfect time to relive one of the best packed-house experiences of last year: the third act of Avengers: Endgame.

We’re all pretty against talking during a movie; stow it for after the thing you paid for, right? But when a movie’s hitting you in the right emotional spot, and the whole cinema feels it too, you have to express it. And boy is that a magical time. Endgame did that in spades. I tell you all, with only a hint of embarrassment, that I let out a room-shattering “YES!” when Cap summoned Mjolnir. It was, for transparency, a critics screening, at 8 in the morning. Among colleagues and peers (and frankly, my betters), I couldn’t contain myself. 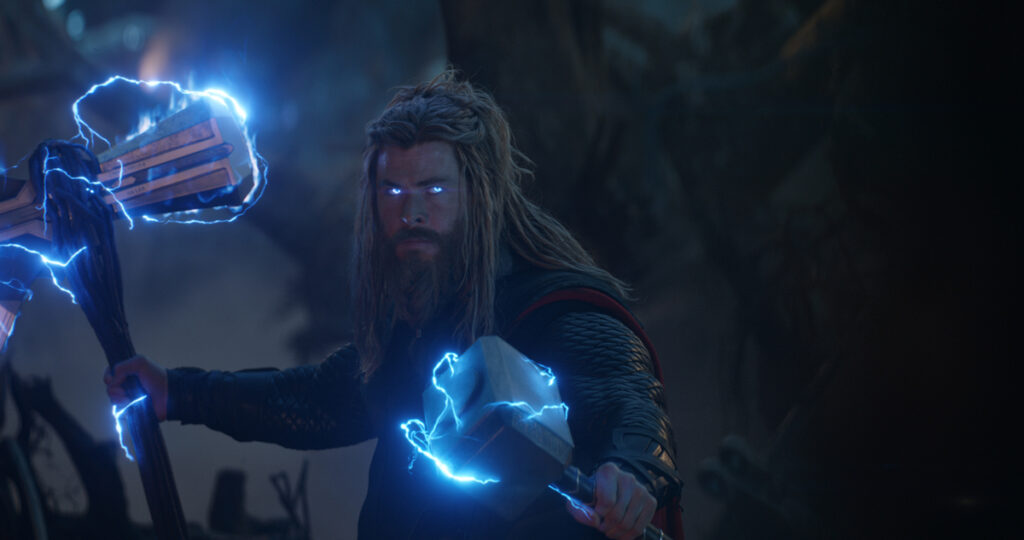 All those feelings came flooding back watching these clips of opening night audio from an Avengers: Endgame screening. The original audio comes from YouTuber thecandyman but journalist Scott Gustin shared the clips on Twitter, and boy they are hitting us right in the feels, as the kids say.

So let’s look at what the opening night crowd did when Cap wailed on Thanos with that lightning hammer.

Pretend I’m screaming “YES!” right when it flies passed Thor and Thanos and reaches Steve’s hand. It’s . . . it’s a moment, you all. I love the guy screaming “Oh my God!” every time another cool thing happens.

Another great moment from the opening night crowd is when Steve, all but defeated, with an army of Thanos’ goons ahead of him, getting a little help on his left.

And of course the theater reaction to PORTALS was bonkers. pic.twitter.com/tllxg9aqMG

I love the small eruptions of cheers when another new hero joins. Black Panther, Shuri, and Okoye get a deserved round of applause; Dr. Strange, the Guardians, and Spider-Man get another. But I’m surprised whatever theater this was still had a roof when all the Avengers lined up as Cap quietly says “Assemble”. They probably had to do a ton of repairs.

Or when Captain Marvel and all the women on the Avengers march out to protect the Gauntlet. That killed in every theater I saw it in, and it absolutely slayed in this audio.

A slightly different response, but the final Thanos v. Tony Stark moment also received its due adulation from the assembled (ha) audience.

"I am Iron Man" pic.twitter.com/wYHKaYhzwD

In a movie full of full-on hero moments, and everybody (especially Cap) got several, it’s Iron Man, fittingly, who gets the big “F-U” to Thanos and thusly the biggest roar from the crowd.

God, Avengers: Endgame is still an amazing feat of blockbuster moviemaking. Listen to that crowd; that’s what pulling off a 22 movie story arc over 11 years sounds like. People are invested in the characters, they were devastated after Infinity War, and they were ready to have some good stuff. And boy did they get it.

Thanks, Mr. Gustin, for giving us a memory of one of the great we’re-all-in-this-together theater moments in recent years. I welled up a few times watching these clips to write this piece, and I gotta tell you all, I needed it. I bet you did too.