Cool Ad. Here's Nerdist
Star Wars
THE LAST JEDI Shows Why It’s Okay for Our Heroes to Disappoint Us
by Michael Walsh
Share
0 comments
FOLLOW NERDIST TO STAY UP TO DATE
FOLLOW US
It’s hard to imagine there is a single Star Wars fan who was happy to learn what kind of man Luke Skywalker had become since we last saw him over three decades ago. Who went into The Last Jedi hoping the brave hero of the originally trilogy would turn out to be a failure who had turned his back on his friends, family, and the Force itself? But in the end, did The Last Jedi disappoint? In fact, the “new Luke” is almost certainly the number one reason the movie currently has a lower audience score on Rotten Tomatoes than every single one of the prequels. Even The Force Awakens averted this degree of scorn after killing off Han Solo (Han ****ing Solo!). At least Han Solo was still the same person we knew and loved. 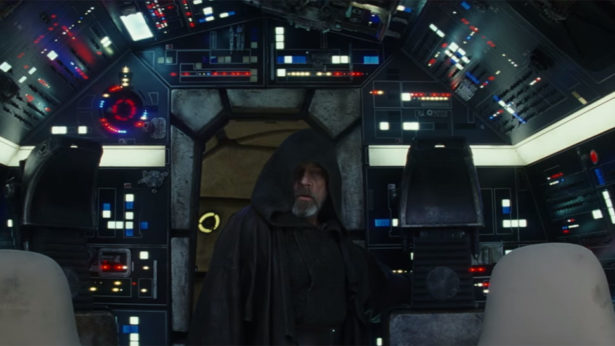 But to reject The Last Jedi‘s take on Luke Skywalker is to cheapen what it means to believe in heroes at all. If it were easy for Luke to stare down Darth Vader and the Emperor, it wouldn’t have meant anything. Anakin Skywalker failed at that task and became the galaxy’s greatest villain. Luke passed it and saved all alienkind. That’s why we loved him. And yes, that’s why it hurt to see the broken man he had become. But people disappoint us all the time, and our heroes aren’t exempt from being human. Life is hard. Doing the right thing is hard. Overcoming our insecurities and failings is hard. If it were easy to be a hero everyone would be one, and we wouldn’t need any. And the reason Luke turned his back on life itself is the most understandable reason of all: he didn’t just fail himself, he failed the people he cared about most. Luke failed for the same reasons the Jedi Council did all those years ago; his arrogance blinded him, even if just for a moment, and the results were catastrophic. But it wasn’t about failing the galaxy or the Jedi Order in Luke’s case. He had let down his sister, best friend, and the nephew who was just a boy he should have been protecting. Who would feel like a hero after doing that? His concern for the whole galaxy caused him to raise his lightsaber to strike down a sleeping Ben Solo, but in that moment he realized there was no right thing to do when your options are either killing your nephew or letting a powerful danger loose on the universe. When he faced down his father, his choice was much simpler: do the right thing or not. It wasn’t easy, but it was clear.

None of this invalidates our disappointment at finding out who Luke had become. It would be weird not to be disappointed by old, sad, broken, hermit Luke. It also doesn’t mean all of the movie’s decisions about how to present him are above reproach. Luke could have been all of those things without also being such so difficult, glib, and cold when it came to Rey. But it’s okay for our heroes to disappoint us sometimes. It’s not just a more honest, challenging story, it’s also a reminder of what made them heroes in the first place. It’s hard to earn that kind of faith, and if it wasn’t we wouldn’t care about them at all. But for as much as The Last Jedi shows it’s okay for them to let us down, it’s more powerful message is that it’s okay for them to come through for us too. Luke needed a new young hero to remind him of why we ever needed him at all, and why we need him now. And for every disappointment we felt with him on Ahch-To, it made his appearance on Crait that much more powerful. Sure, our hero fell, but the best ones always get back up. And they don’t get any better than Luke Skywalker. Who could be disappointed in that?[/nerdist_section]

What do you think about Luke’s story arc? Share your thoughts with us in the comments below.