The storyline “One More Day” is one of the most controversial in all of Spider-Man’s nearly sixty year history. In that infamous storyline by J. Michael Straczynski and Joe Quesada, Peter Parker made a literal deal with the Devil, a.k.a. Mephisto, to save the life of his dear Aunt May. This is after exposing his secret identity to the world, for which May winds up paying the price. Could this be the plot basis for Spider-Man 3?

In today’s Nerdist News, Dan Casey presents a theory about how Marvel’s demonic dealmaker Mephisto might be the secret main villain of the upcoming Spider-Man threequel, and explains just how Doctor Stephen Strange might play into all of this.

The price of Spider-Man’s deal with Mephisto to save Aunt May is the erasure of his marriage to Mary Jane from history. Doctor Strange then cleans up and erases the public knowledge of Peter Parker’s secret identity from the world. Is this our Spider-Man 3 blueprint? Let’s look at the evidence,

At the end of Far From Home, a doctored video from Mysterio frames Peter Parker for his death, and also exposes Peter Parker’s secret identity to the entire world. That makes Peter turning to his new friend Doctor Strange reasonable. Although many surmise Strange will be the one to erase the world’s memory of Peter’s secret identity, we actually think the dreaded Mephisto might be the one to do all the damage. And he would learn of Mephisto through his Doctor Strange connections. 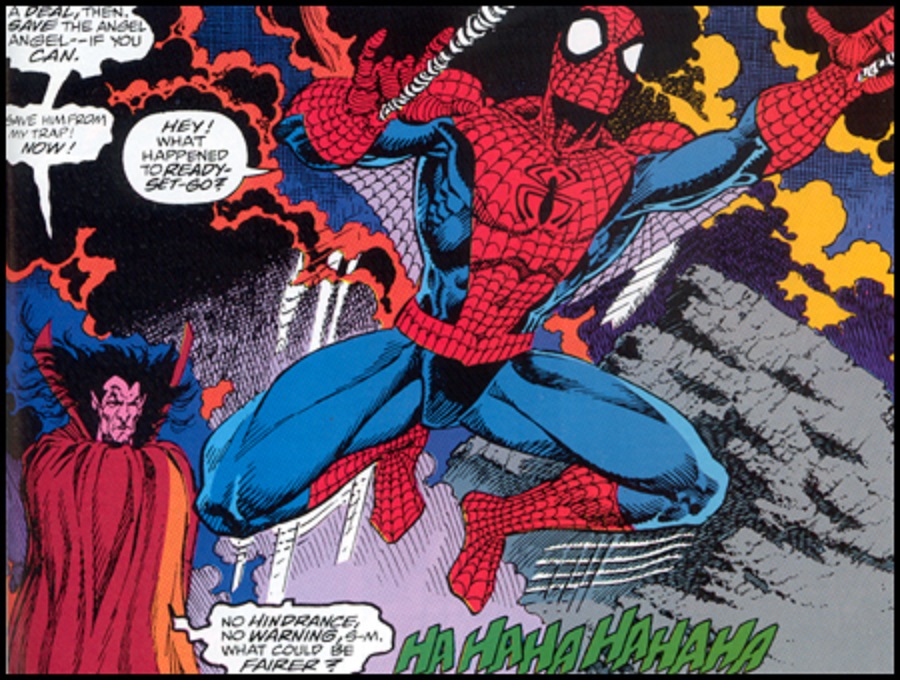 Because of Peter’s identity being exposed, his loved ones become prime targets to every baddie he’s ever fought. Mephisto might take advantage of Peter’s desperation and naiveté. He could rope him into a bargain that spares his loved ones from harm while creating a new reality that further damages an already fractured Multiverse. A fracturing that will probably happen in the upcoming WandaVision.

It seems like Marvel Studios is definitely setting up a trilogy of sorts, starting with WandaVision. Doctor Strange is rumored to appear in that series before appearing in Spider-Man 3. Finally, Wanda is starring in Doctor Strange in the Multiverse of Madness. In the Marvel comics that WandaVision is at least partially based on, Mephisto causes many of Scarlet Witch’s troubles. If he shows up in the upcoming Marvel TV series, could he be making his next move in Spider-Man 3? Has Marvel’s next “Big Bad” been staring us in the face, and we just haven’t seen it? It would be so like the Devil to hide in plain sight.