One of our favorite things in Star Wars: The Rise of Skywalker was the concept of Dark Rey. The character is, for the most part, a virtuous and pure Force user, though the Dark Side occasionally tempts her. We see it in The Last Jedi, when she’s drawn to the blackened cave on Ahch-To. And we see it again in Skywalker when visions of herself with whitened eyes and a black hood, sitting on a throne, haunt her. 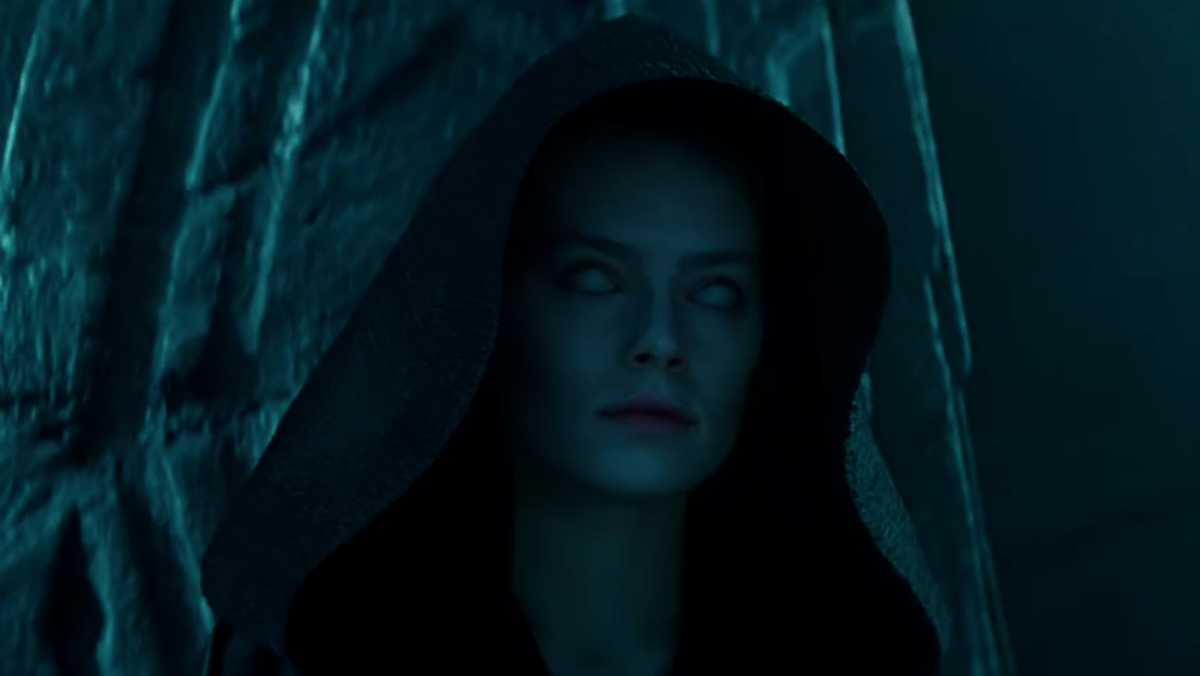 We also see it when she is very literally confronted with her Dark Side self in the Death Star ruins. It’s a fun sequence where The Rise of Skywalker momentarily turns into a haunted house movie. As we learn, this vision is a manifestation of Rey’s anxiety about her bloodline; she’s a Palpatine, and therefore a relative of Space Hitler. That would mess with anyone’s head, especially someone strong in the Force and therefore prone to visions and feelings. Even before she knows she’s a Palpatine, Rey’s psyche is leading her down that dark path.

Now, a new piece of concept art from The Rise of Skywalker shows another way Dark Rey might have manifested: as the successor to Kylo Ren.

This freaky image was shared by Adam Brockbank, a concept artist who worked on The Rise of Skywalker, and also on The Last Jedi and Rogue One. Concept art doesn’t necessarily mean this was ever actually going to appear in the film; it does mean Brockbank had sort of intel that inspired the idea of “Rey Ren”. He specifically refers to this image as “Dark Rey,” meaning it would likely have appeared in her flash visions or in the Death Star.

It’s an interesting concept, because it relates Rey’s darkness specifically through the prism of Kylo Ren. That’s not a totally bonkers idea; as we learn in the film, Rey and Ren are “Force dyads,” an ancient bit of Force magic that unites a Dark and Light Side user in a sort of ying-yang partnership. This makes them quite literally soulmates of a sort (be that romantic or otherwise), so it’s natural that Rey might look inwards and see herself as a female version of Ren.

Lucasfilm / Wifflegif
We see hints of that in the final version of the film. The lightsaber Dark Rey yields crackles and snaps just like Kylo Ren’s. It’s also got a unique design, starting as a double-side saber and snapping together to form two blades. That feels symbolic of Rey’s relationship with Ren. Two opposites that come together and forge something even stronger than they are separate.

Rey as Ren is also evident in another bit of concept art Brockbank shared. In this image, we see Dark Rey in an outfit that’s nearly identical to the one Kylo Ren wears throughout all three sequel trilogy films. It’s got some flourishes that make it distinctly “Rey” (i.e. the belt that crosses similarly to Rey’s regular outfits) but the style and material is very Ren.

Not gonna lie… it would have been great to see this distinct parallel between Rey and Ren in the final version of The Rise of Skywalker. Mostly because Rey in Kylo’s helmet is just super badass. But we’re happy we got to see this concept art at all.