The Case for Reylo in STAR WARS: THE RISE OF SKYWALKER - Nerdist

The Case for Reylo in STAR WARS: THE RISE OF SKYWALKER

What does it mean to have a soulmate? There are millions of definitions across religions and philosophies, in poetry and literature and plays. The concept is often tied to love; it’s the completion of oneself, two souls diverged, seeking their other half. According to Aristophanes, “Love is born into every human being; it calls back the halves of our original nature together; it tries to make one out of two and heal the wound of human nature.” Most of us will never find this healer, if such a person even exists. But that’s the role fantasy plays in our lives: Divine concepts made reality, heightened ideas and themes conjured into something imaginative and palpable. Fantasy helps us feel better, look at the world with a deeper fascination; it helps us see in shades beyond just black and white. Some might even argue that fantasy exists to help us understand how to love and be loved.

That’s why, in my eyes, the Rey/Kylo pairing— affectionately dubbed “Reylo” by ‘shippers—is so popular, and has taken such a central role in the Star Wars sequel fandom. Because, fundamentally, their union is about two broken halves seeking resolution; two “unloved” people who desire understanding, who cannot find it even in the most well-intentioned people in their orbit. Rey, the forgotten orphan, and Kylo, the privileged son of a pair of war heroes, both feel that isolation in different ways. Adam Driver—who plays Kylo Ren, a.k.a. Ben Solo, the son of Han Solo and Leia Organa, in the films—even spoke about his character’s parentage and this perceived loneliness in a recent issue of Vanity Fair:

“If you were the product of those two people, two very strong personalities who seemed to be almost more committed to a cause than anything else, what’s that like? How do you form friendships out of that? How do you understand the weight of that? . . . It can easily go awry.”

Ben Solo was loved, as evidenced by Han Solo’s noble sacrifice in The Force Awakens, but he expressed it too late, when Ben was already beneath the shadow of the all-powerful Supreme Leader Snoke—or, perhaps, an even more foreboding evil: Emperor Palpatine, whose sniveling laugh was heard in the trailer for December’s final film in the episodic films, The Rise of Skywalker. Ben’s transition into Kylo Ren might be less of a choice than he knows, and if that’s true, the underlying good Rey senses in him in The Last Jedi could still win out. If only she continues to believe in him.

That right there is the sticking point for some fans. This idea that Rey, our fierce warrior and deeply pure heroine, needs to save the “bad man.” Putting the onus on Rey, in their eyes, focuses the narrative in a detrimental, damaging way. Kylo has sowed his seed. He’s evil. He should die the villain he’s let himself become. 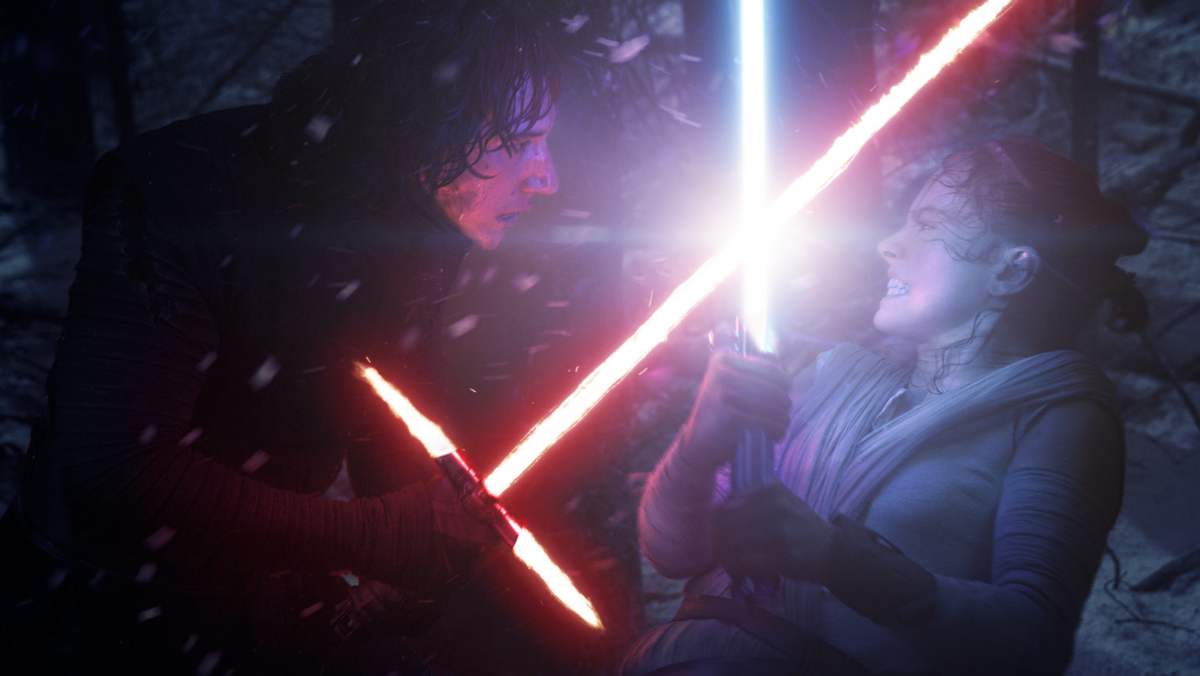 But that stands in contrast to everything we know about these characters, this trilogy, and this saga as a whole. Redemption is baked into the mythology of Star Wars. It’s why, even after committing genocide against the Jedi, Darth Vader was restored to his “good” self in his final moments. The Force paints in broad strokes, and Rey’s desire to restore good to the only person who “gets” her doesn’t weaken her morale or characterization. It proves her ultimate strength: forgiveness. The most Jedi of all concepts, because it is entirely selfless. For Rey, that selflessness contains layers, because it might also be rooted in her personal desire to see her other half rise. The dark and the light, joined.

Think back to Anakin and Padme, and their doomed love, which destroyed the Jedi Order and inadvertently created the Empire. Romantic love was forbidden for Jedi, and so they hid their affection, to their own detriment. The Jedi’s repression of desire was their greatest fallibility. So how does the Force, this almighty power, reckon with its destruction? By creating two all-powerful Force users, from different worlds and different sides, drawn together by fate and passion. Romantic love broke the Jedi Order. It might be the only thing that can save it.

Each trilogy has had its central love story—Anakin and Padme, Han and Leia—and both so far have ended in tragedy. Those opposed to Rey and Kylo’s union might tell you Star Wars isn’t about romantic love. I would argue the opposite: That it’s all about love, in its many iterations. Romantic love is part of that, and it doesn’t make characters like Rey lesser if she’s drawn to a soulmate, or if she looks for love in the arms of a man. Redemption arcs in fantasy are almost never rooted in a woman’s desires. But female desire isn’t a weakness. In this case, it could be the most powerful thing in the universe.

Rey’s love for Kylo may not save him. It may not be consummated. It may be rooted in the same tragedy that Padme and Anakin’s was, or it may never be actualized; left instead for interpretation. But to ignore the chemistry, the bond, and the soulmate nature of what the story is presenting in Rey and Kylo’s mutual arcs doesn’t feel right. If Reylo does indeed manifest into a fully realized romance, it wouldn’t hurt the story; it would enhance it. “The darkness rises and light to meet it.” It’s been there all along.