We all were charmed beyond belief by Monica Rambeau when she appeared as a kid in Captain Marvel, played by Akira Akbar. But it’s the adult Monica, played by Teyonah Parris, who has really fleshed the character out and made us all truly fall in love with her on WandaVision. Many fans believed Marvel Studios would wait a long time to give Monica her comic book superpowers and make her a full on superhero. Well luckily, we did not have to wait very long.

Below you’ll find spoilers for WandaVision up through episode 7, “Breaking the Fourth Wall.” Please beware. 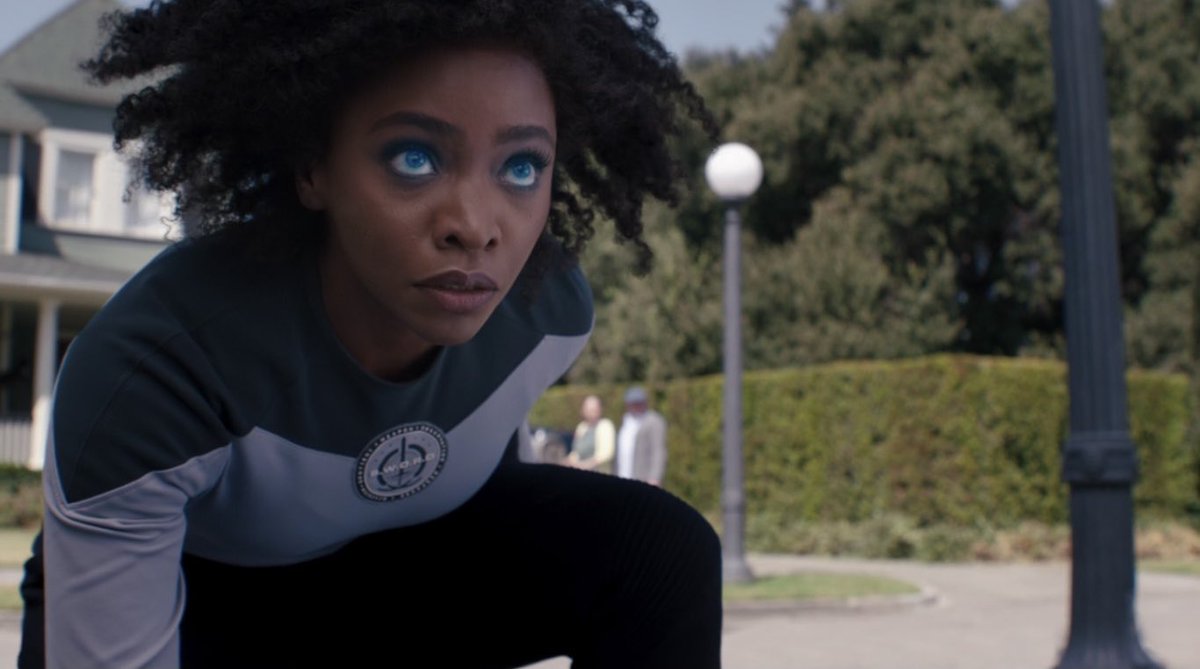 In episode seven of WandaVision, titled “Breaking the Fourth Wall,” Monica finally is fully powered up. But just what are Monica’s powers, at least in the comics? And do they match her MCU power set? Here’s everything we know about Monica’s super powers, which are pretty off the charts. But first, let’s begin with a brief history lesson on Monica’s comics origins. She may have gone by the heroic names Spectrum, Photon, and Pulsar, but she starts out as the very first female Captain Marvel.

A Brief History of Monica Rambeau as Captain Marvel 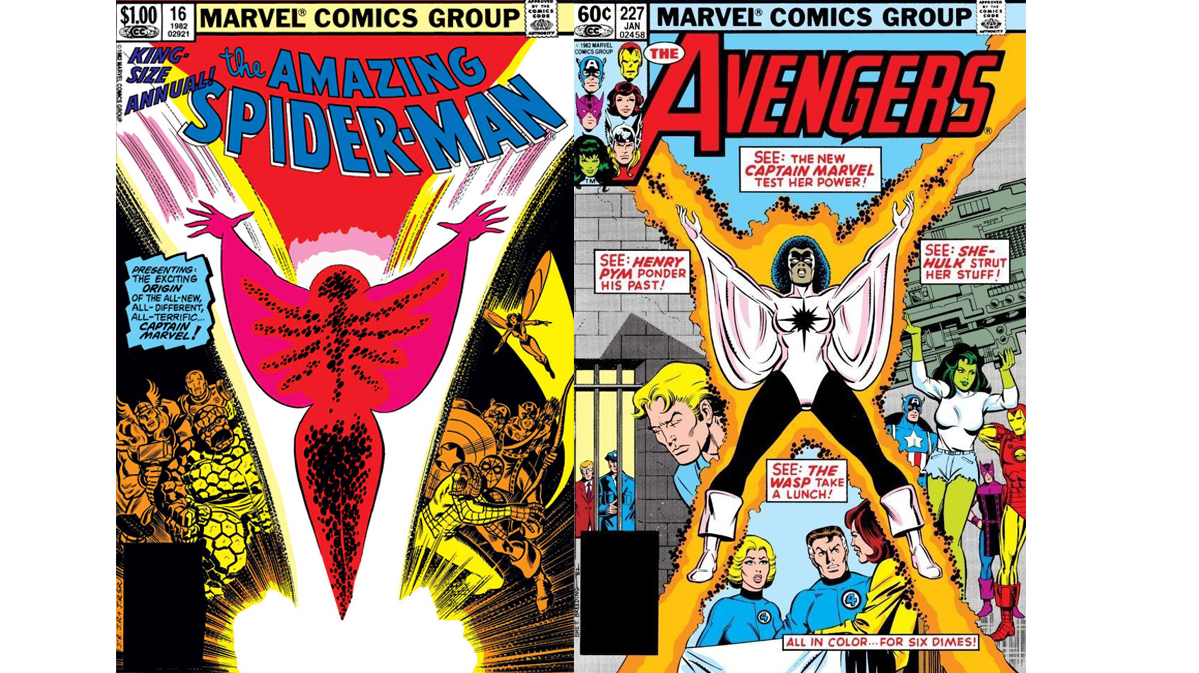 Monica Rambeau first appeared in Amazing Spider-Man Annual #16 in 1982. At the time, Marvel Comics’ original Captain Marvel (a.k.a. Kree hero Mar-Vell) had just died. His friend Carol Danvers, who had honored him by taking on the name Ms. Marvel, was still around. But she had become a supporting character in Uncanny X-Men, and was seemingly leaving her hero days behind her. Thus, Marvel created the all-new character of Monica Rambeau to take on the name Captain Marvel. So yes, despite what happens in the MCU, in the comics it was Monica who was the first female Captain Marvel. Unlike the MCU, she didn’t have a prior connection to Mar-Vell or even Carol. 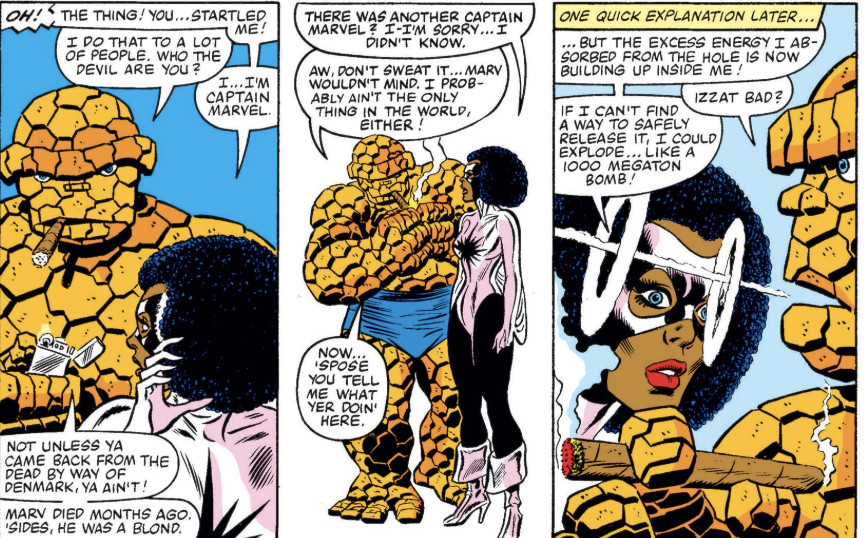 In the Marvel Comics universe, Monica is in the New Orleans harbor patrol, operating as a cargo ship captain. So the Captain in her original superhero name is not just an honorific. She’s the real deal. While attempting to prevent the creation of a dangerous weapon, Rambeau is exposed to extra-dimensional energy. After that incident, she’s able to convert her body to pure energy at will. The Fantastic Four’s Reed Richards theorizes that Monica is constantly pulling in energy from the dimension where she receives her powers. Soon, the media gives her the name “Captain Marvel.” The FF’s Ben Grimm explains to her that Mar-Vell would have approved. 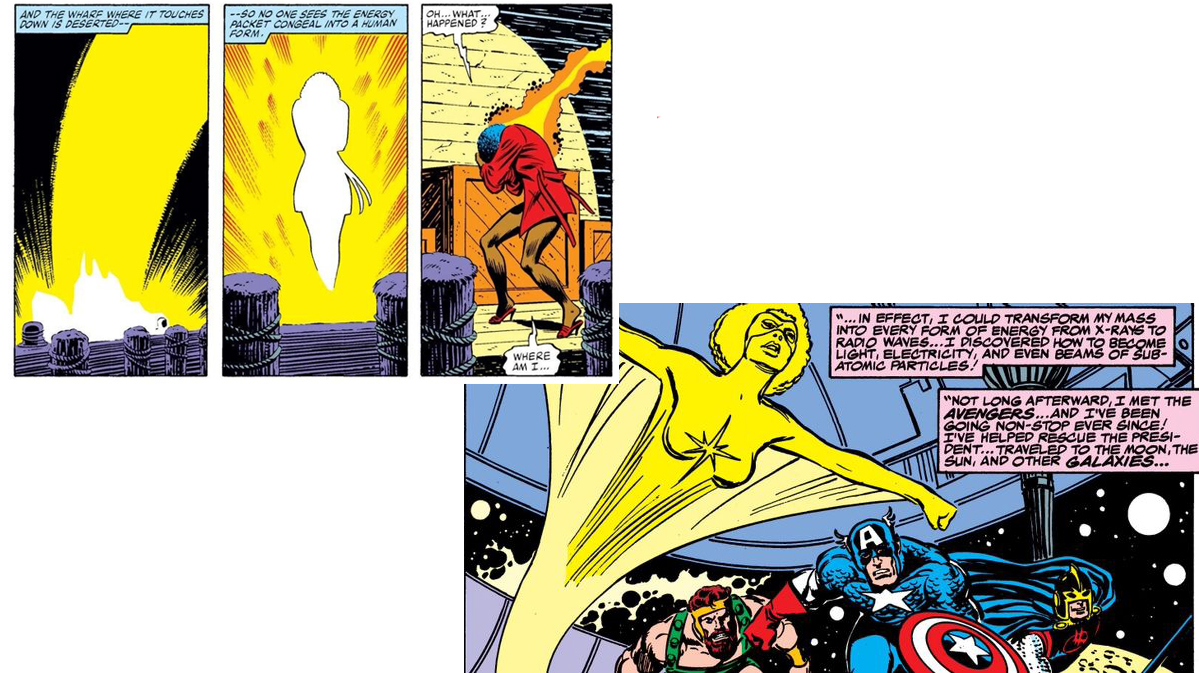 Monica’s power set is pretty much God-tier. She can transform into any form of energy within the electromagnetic spectrum. While in her energy form, she can control gamma rays, ultraviolet radiation, electricity, infrared radiation, x-rays, microwaves, and radio waves. Whenever she is in any one particular energy-form, she can exhibit all of that energy’s properties. She can only transform into one form of energy at a time, but she can flip back and forth between forms fast. Whenever Monica comes across a new form of energy, she can also duplicate its properties. 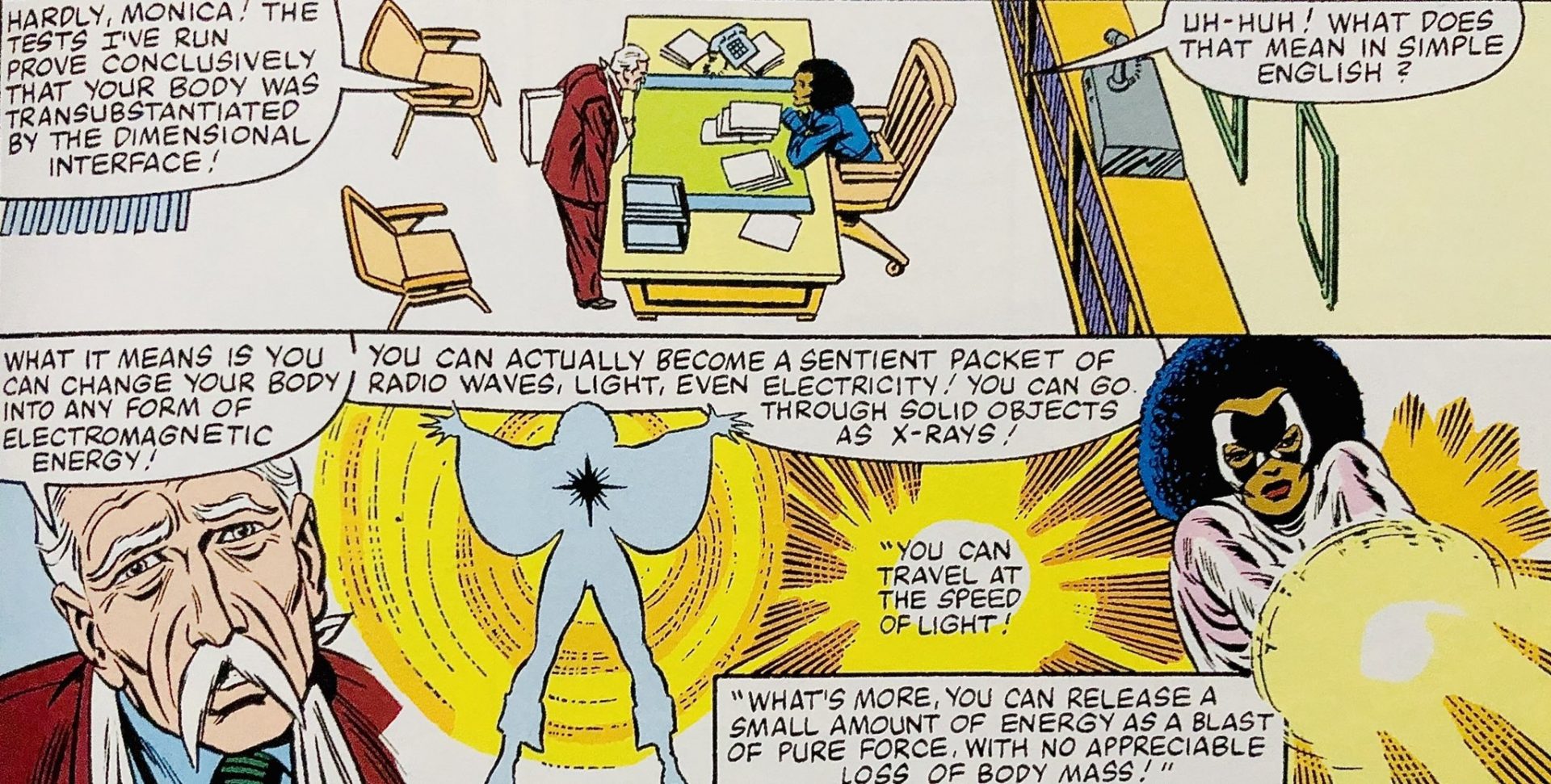 Monica has the ability to absorb most forms of energy, and redirect them back at an opponent. Even without absorbing energy, she has the power to fire blasts based on different forms of energy she can channel. She also has the power to manipulate light to such a degree that she can become invisible, or alter that light around her to make her look like anyone she wants. While in pure energy form, she can even become intangible and walk through solid matter. In some instances, she can duplicate her energy form into multiple versions of herself. Monica also has the power to fly at superhuman speeds, even as fast as the speed of light. Essentially, she’s like Carol Danvers, the Invisible Woman, Multiple Man, and Kitty Pryde all rolled into one! 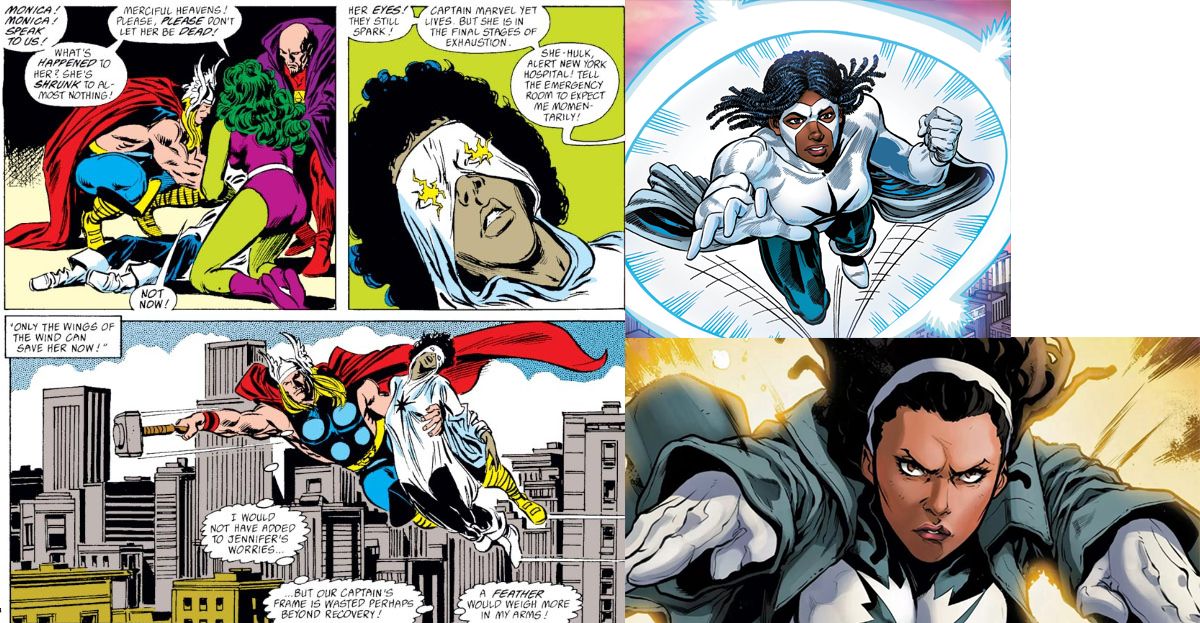 One of the Most Powerful Avengers

Monica’s powers do have limits though. During an Avengers battle that took place on the ocean, she altered her form into that of an enormous bolt of lightning trying to stop a sea beast. While in that form, she accidentally made contact with the water and conducted herself on the ocean’s surface. This causes her to disperse her atoms all over, only barely able to come back to her human form. When she did come back, it was weak and withered, looking very much like an old woman. And at the time, she seemingly lost her powers as well. She did eventually regain them years later, and when she does, she discovers that she is stronger than before. And effectively immortal. 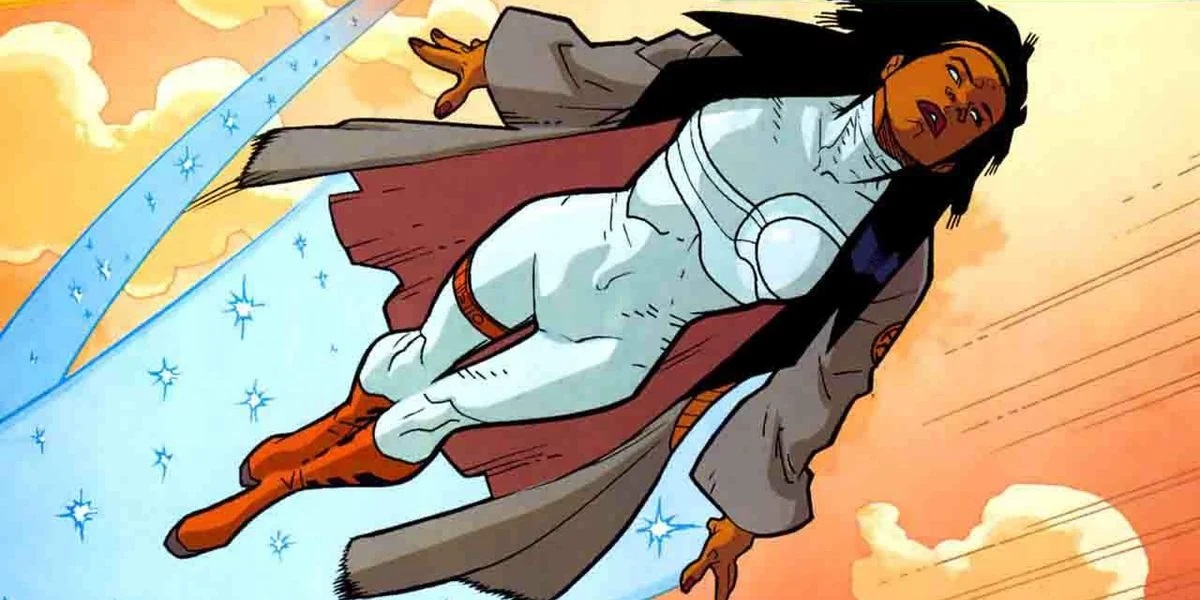 Will the MCU’s Monica display such a wide range of superpowers? Only time will tell. Her powers are not derived in the exact same way as in the comics, although extradimensional energy seems to be the key in both versions. So there’s no reason to think her powers won’t be mostly the same. If her on screen powers match her comic book powers, she will easily be one of the strongest heroes ever in the MCU. Now, what superhero name will she use? That’s a more difficult question to answer! But as with all things Monica, we can’t wait to find out.