Archimedes once said, “Give me a lever and a place to stand and I will move the world.” It’s a beautiful line beloved by poets and physicists, but we’re reminded of it now for a very different, very worrisome reason. A startup company wants to make something that sounds like it came out of a science fiction movie. It plans to build a massive laser that could propel a probe to another star system, opening up the possibility of interstellar travel in the future. There’s one very glaring problem (literally) with that plan, an issue that can best be summed up by paraphrasing Archimedes: “Give me a laser big enough to move a probe and I might accidentally blow up an entire city.”Breakthrough Starshot, which we learned about at Business Insider, hopes to send nanocraft, “a fully functional space probe at gram-scale weight,” on a deep space journey via light beam using a giant 100-megawatt laser. According to their calculations the tiny probes could reach twenty percent the speed of light, reaching our nearest star system neighbor Alpha Centauri in 20 years, whereas “with current rocket propulsion technology, it would take tens or hundreds of millennia to reach our neighboring star system.” That description doesn’t even capture just how incredible the entire concept is, because this video from 2016 looks like something out of a late 20th century evil super villain’s master plan.

This certainly both sounds and looks crazy, but the project has some big names attached, including the late Stephen Hawking, Russian-American billionaire Yuri Milner, and Harvard University astronomer Avi Loeb. Breakthrough also has 100 million dollars worth of backing to use for the next ten years thanks to Silicon Valley investors. They are really going to try and make this happen.Of course, you can’t build a giant laser without issue, and there are tons of potential pitfalls that could derail the project before it ever gets off the ground. But the scariest is that a 100-gigawatt laser beam would be big enough that if reflected back to Earth, it could, according to the project’sÂ chief engineer Peter Klupar, “ignite an entire city” in just a few minutes.Which, you know, not great. 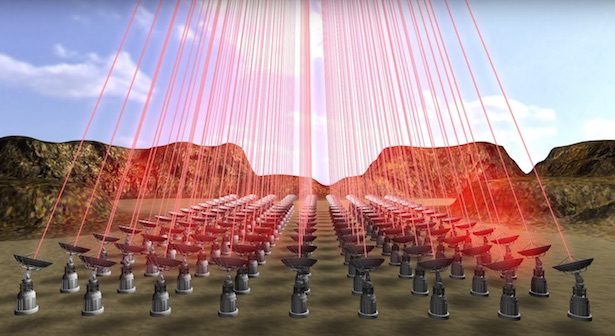 We’re used to the idea of giant “lasers” being used to destroy cities, but only when Austin Powers or Jedi are around to stop that from happening. Because as much as we want to develop the technology that will make interstellar space travel possible one day, we don’t want to do it at the cost of millions of innocent lives. Let’s not turn our wildest dreams into terrifying nightmares.