Who Are Marvel's Deviants? Meet the Evil Foes From ETERNALS - Nerdist

Who Are Marvel’s Deviants? Meet the Evil Foes From ETERNALS

The Eternals are almost here. This Jack Kirby-created immortal race has recurred in Marvel Comics for forty-five years. But since Eternals #1 hit the stands back in 1976, their primary antagonists have been the brutal and repellent race called the Deviants. And they are due for their movie debut in Eternals alongside their angelic adversaries. But just what on Earth are these Eternals’ villains? Here’s everything you need to know about Marvel’s Deviants.

Who and What Are Marvel’s Deviants? And Who Created Them? 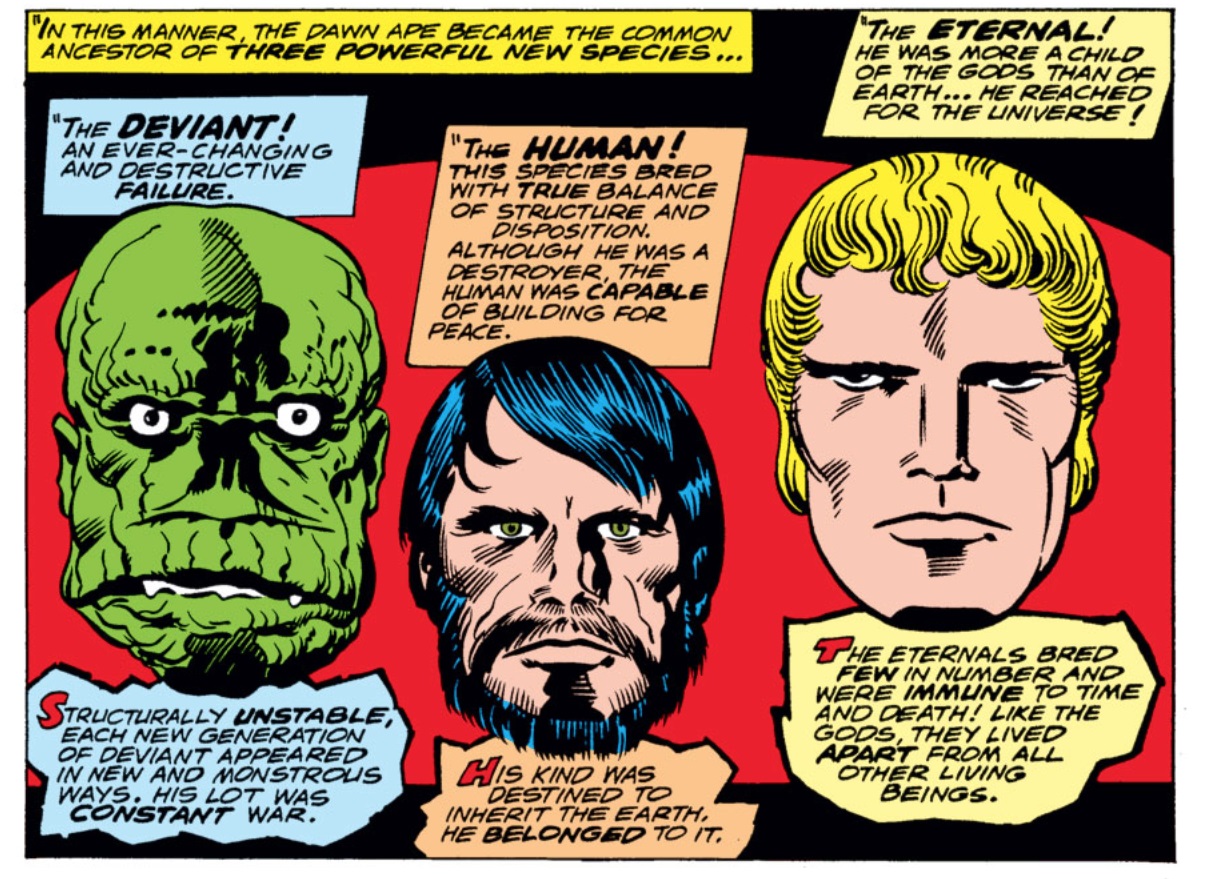 The Deviants and the Eternals are, no pun intended, eternally linked. Millions of years ago, the god-like and immortal Celestials came to Earth 616. At this point, humanity was only in its early hominid stage. The Celestials experimented on these early proto-humans, and they created three new genetic branches. These included a special offshoot of baseline humans, which contained the seeds for genetic enhancement (later leading to mutants), the Deviants, and finally, the Eternals. In short, the Celestials made the Deviants. 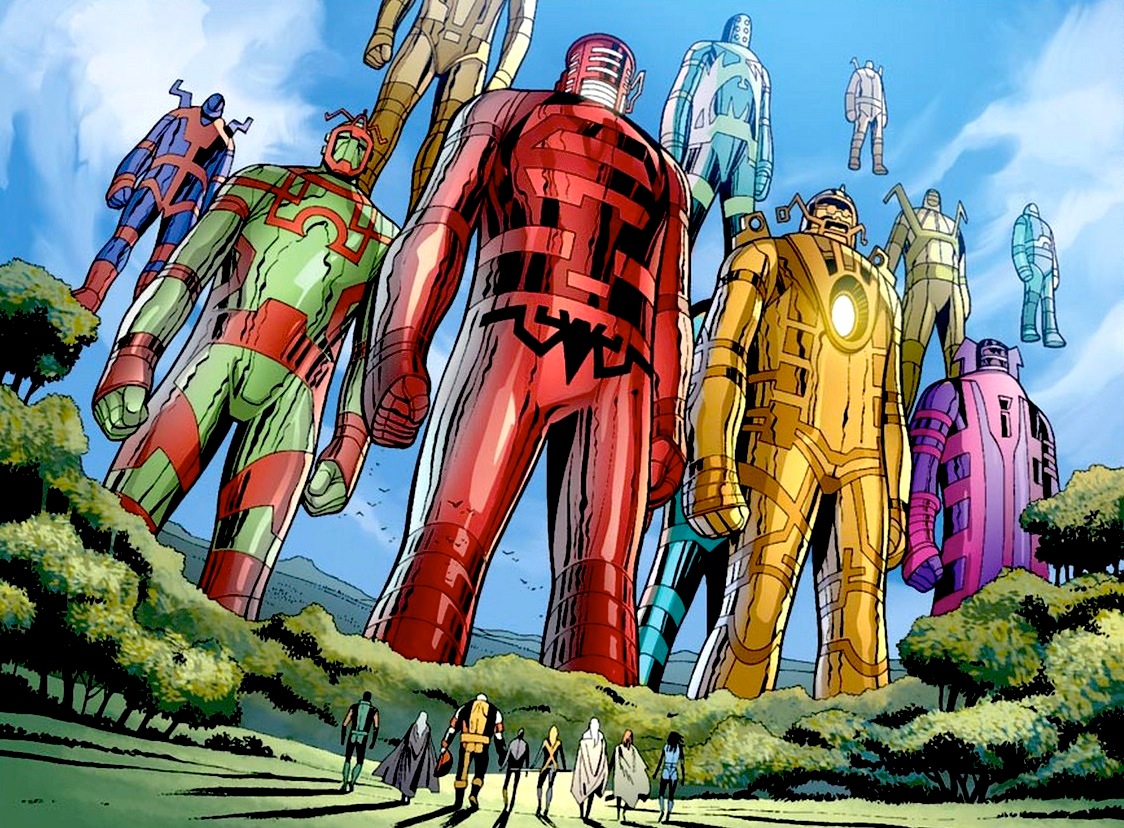 Ziran the Tester was the Celestial who caused the mutation in the proto-humans that resulted in Marvel’s Deviants, which were given another name: Homo descendus. These Deviants had destabilized DNA, which meant they each exhibited different mutations and powers. They also often had fangs and sharp claws. In Marvel Comics lore, it is said that various human cultures’ mythologies about goblins and demons emerged from early humans misunderstanding what a Deviant was.

However, in terms of the Deviant’s connection to humans, despite their darker tendencies, they evolved much faster than humans. They also excelled in terms of technological advancement. While humans were still developing basic skills and language, the Deviants mastered science and genetics. This knowledge allowed them to subjugate early humans. But their reign of terror would not last forever.

What Are the Deviants’ Powers and Abilities? 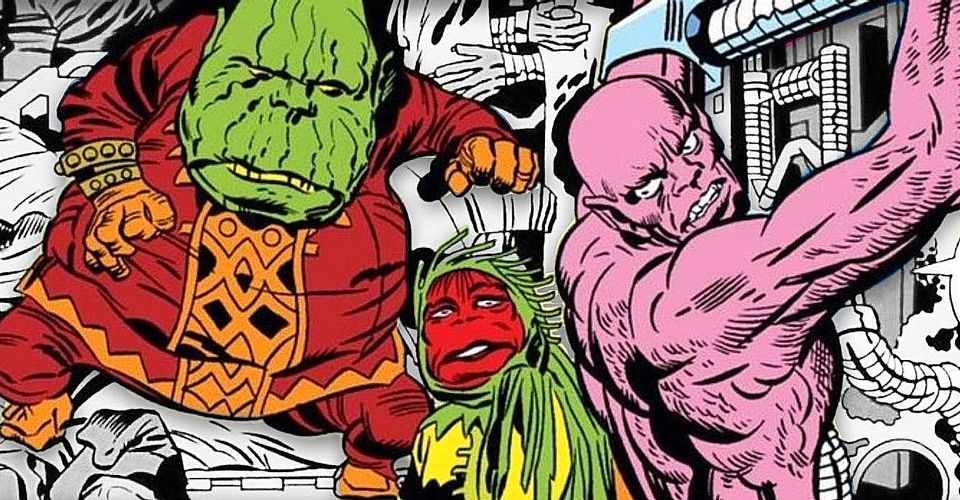 The Deviants, by their very natures, do not come with a consistent set of powers. They tend to resemble Marvel’s mutant race, who are each genetically different from one another. However, most or all have some level of super strength. Deviant children rarely resemble their parents. The most often displayed Deviant powers in the Marvel universe are shape-shifting, a healing factor, fire breathing, matter transmutation, super speed, and occasionally, mental abilities like telepathy and mind control. Marvel’s Deviants are not typically immortal, but it is not a gift entirely closed to them either.

For centuries, the Deviants saw themselves as the Celestials “cast-offs,” and the Eternals their favored children. This led to a bitter rivalry between both races, despite there being some “Romeo and Juliet” style romance between members of the two groups.  This also caused the Deviants to loathe their creators, the Celestials. Regardless of that hate, they developed a very strict religion among themselves—one where they worshipped the “Dreaming Celestial,” Tiamut.

Judged by the Celestials 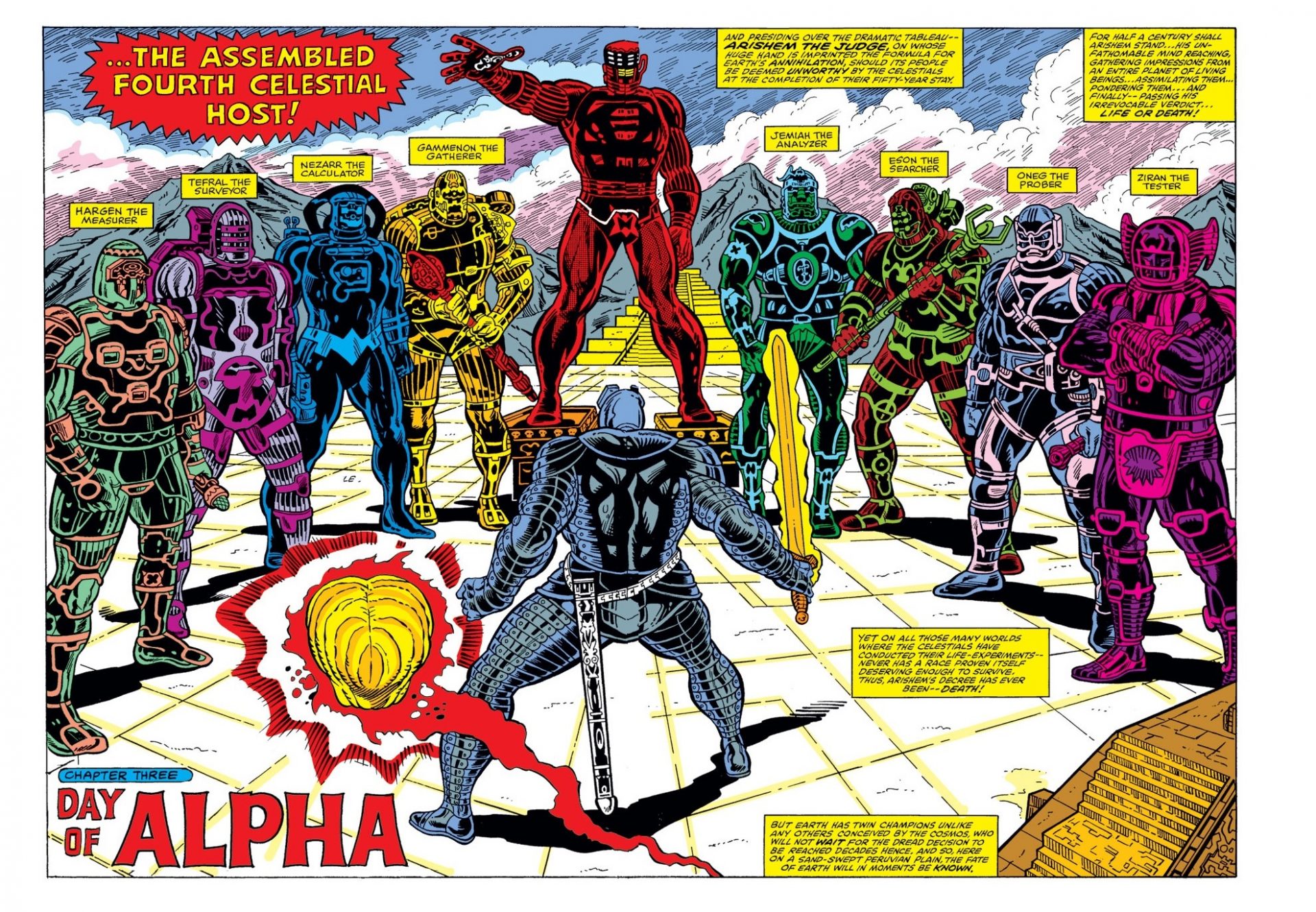 When the Celestials returned to Earth thousands of years later, they saw what had become of their experiment. They came to Earth for what the Celestials called “the Second Host.” This is the second of four times the god-like figures return to test and judge those they created. All of this occurred circa 18,500 B.C. Needless to say, their progenitors judged their errant children harshly.

The returning Celestials saw that the Eternals had let humanity develop on its own, protecting them in secret. Meanwhile, the Deviants enslaved humankind. As punishment, the Celestials destroyed most of the Deviants and their entire country of Lemuria, causing it to sink below the ocean. Eventually, what was left of the Deviants went underground, quite literally. And they’ve remained a hidden race ever since, bitter and jealous towards their cousins, the Eternals.

Who Are the Most Dangerous Members of the Deviants? 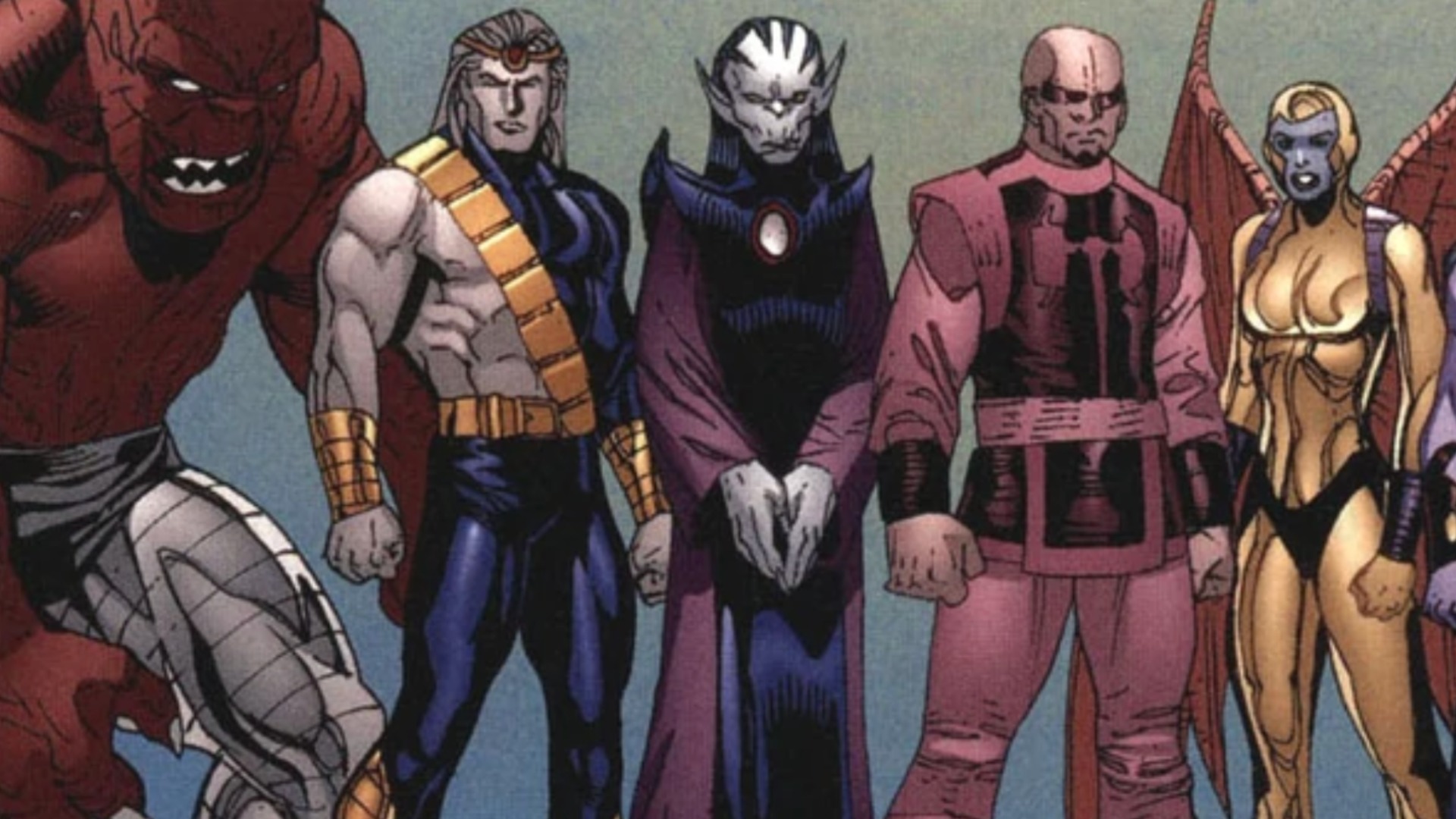 Over the years, the heroes of the Marvel Universe have faced certain Deviants regularly. Kro is the most famous Deviant villain and one who shares many things in common with the Eternals. For starters, unlike the rest of the Deviants, he is immortal like the Eternals. However, his primary power is that of shape-shifting. And he also had a romantic relationship with the Eternal Thena, which causes him to sometimes ally himself with the Eternals over his own people.

Another major Deviant villain is the leader of the religious sect, Ghaur. Ghaur had the power to change the genetic structure of any Deviant, giving them new shapes or killing any Deviant by creating a lethal mutation. Moreover, as the head priest of the religion, it was his job to rid the Deviant society of any Deviants considered as having the most extreme features, all as a part of a “purity” ritual. And the Deviant monarch Brother Tode was another perpetual thorn in the Eternals’ side.

Where Have the Deviants Appeared in Marvel Comics? 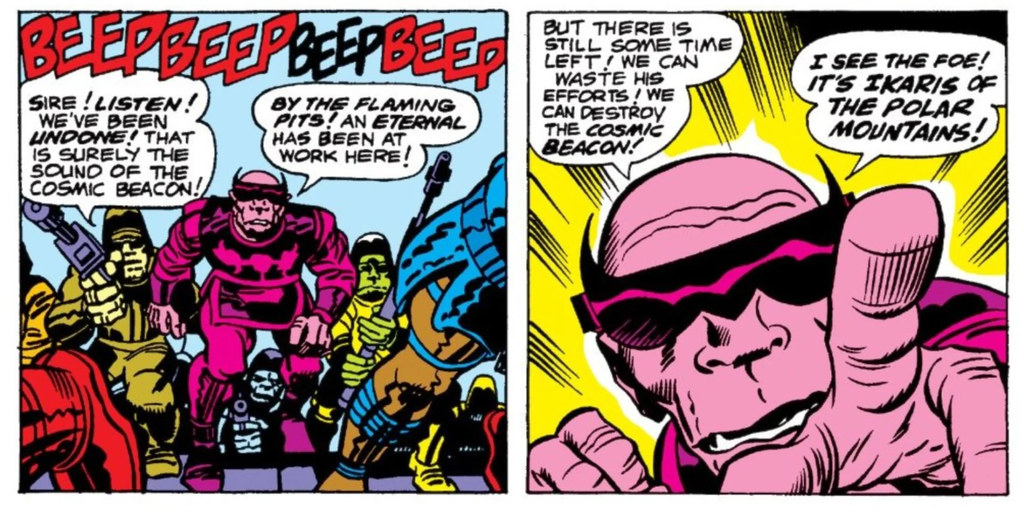 For the most part, Marvel’s Deviants have stuck to the Eternals comics. Of which there are relatively few, compared to other Marvel super teams. However, they did appear as antagonists in comics like Thor, Iron Man, The Incredible Hulk, and Avengers. Later, they’d pop up in books like X-Factor, albeit briefly. But mostly, they have remained present in various Eternals series and limited series, including the 2000s series from writer Neil Gaiman.

How Will the Deviants Impact the MCU? 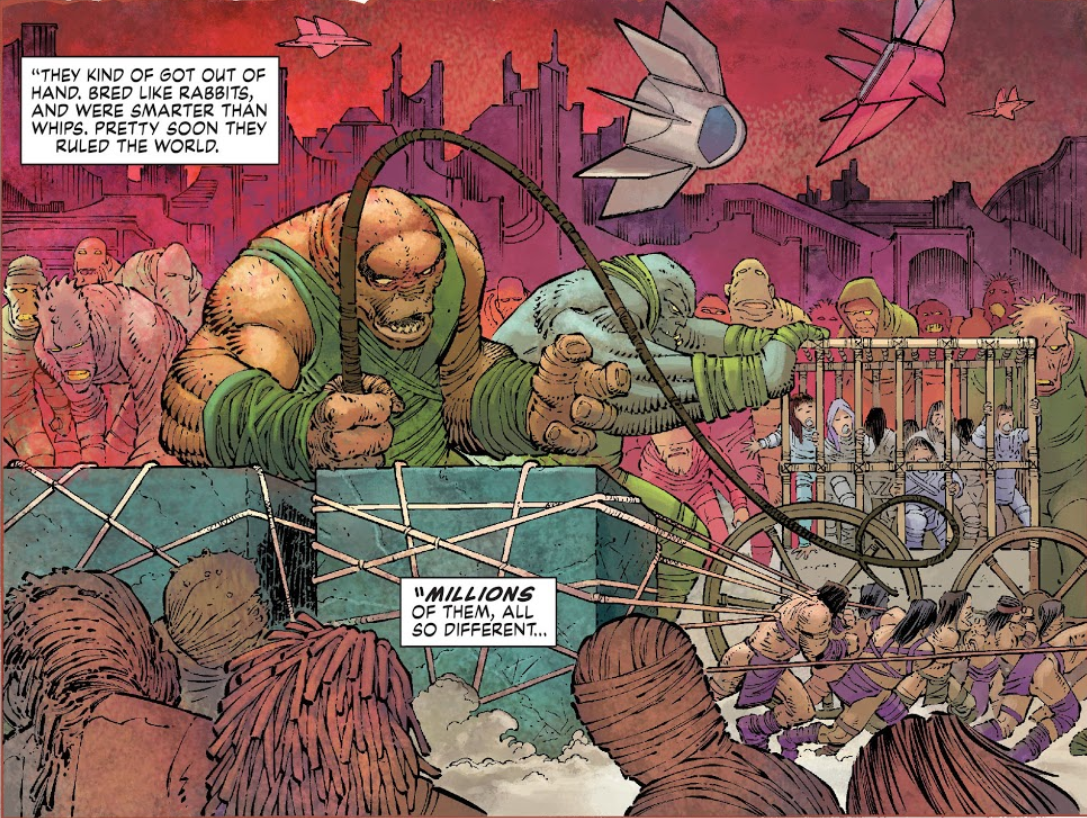 We’ve already talked about how Eternals will no doubt explain the existence of mutants in the MCU. But aside from those born with the X-gene, we still have to explain the presence of the Atlanteans. Especially if Namor the Sub-Mariner shows up soon, as rumored. Well, in the comics, the Deviants have a long-standing rivalry with the nation of Atlantis, some of the only humans in the ancient world who were as technologically advanced as they are. And whose kingdoms sank into the ocean at the same time.

During their rivalry with Atlantis, the center of the Deviants’ empire was the island continent of Lemuria in the Pacific Ocean. The Deviants sent a human army from their home nation to attack Atlantis itself. Atlantis’ King opened the magma pits, the capital city’s means of heating, to hold off the invading army. The Lemurian invaders found themselves destroyed by the molten lava, but the release triggered seismological disasters. Disasters that ultimately sank Atlantis. We may see the MCU version of the Deviants vs. Atlanteans play out in some way in the future.

Which Deviants Are in the MCU’s Eternals? 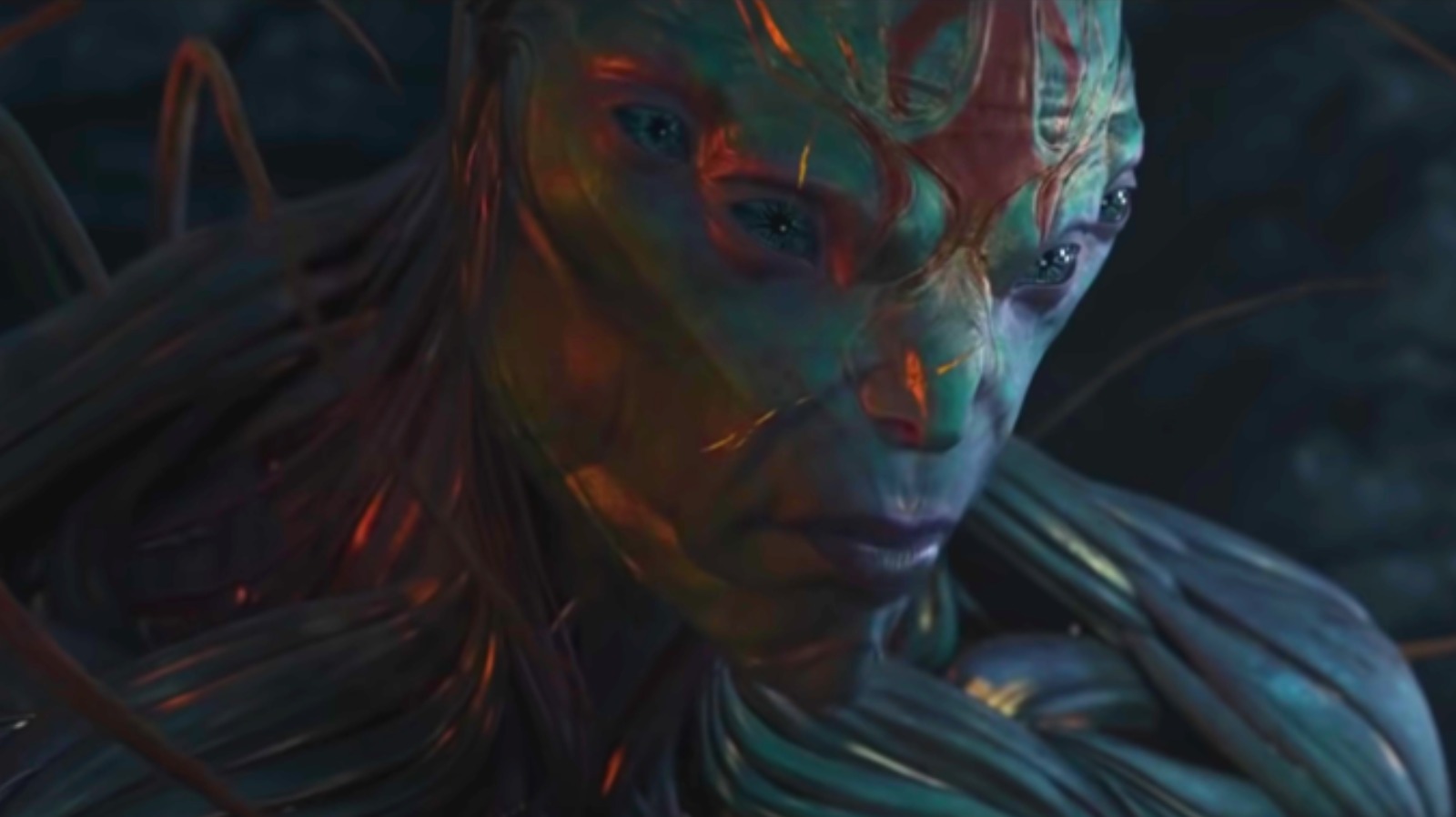 The Deviants are set to make an official big-screen appearance in the MCU’s Eternals. The trailers have given us only a brief glimpse. But we can safely guess that the humanoid Deviant is Warlord Kro. If only because he is sharing a scene with Thena. The other two Deviants we’ve seen look more creature-like, which is a departure from the comics. Ereshkigal, the winged Deviant, looks to also be in the trailer, although in an altered form. We do not yet know who has been cast to play these Deviants in the MCU.

Of course, if they keep to the comics lore, we’ve already seen a Deviant on screen in the MCU. Thanos is actually connected to the Deviants. In the comics, Thanos was an Eternal but born with Deviant DNA on the planet Titan. Though we did not see him align with other Deviants, nor see any Thanos vs. Deviants encounters, we may have had our first Deviant on-screen since Avengers in 2012!