Knives Out, Rian Johnson’s Agatha Christie-inspired follow up to The Last Jedi, does for murder mysteries what its predecessor did for Star Wars: deconstructs the structure and very canon from which it came to deliver an experience that’s both deeply satisfying and thrillingly unique. It also features a star-studded cast that includes Daniel Craig, Jamie Lee Curtis, Chris Evans, Ana de Armas, Lakeith Stanfield and scene-stealer and Johnson’s longtime collaborator Noah Segan as Trooper Wagner, a goofy cop who also happens to be an expert on every twist and turn in recently-murdered patriarch Harlan Thrombey’s best-selling mysteries.

Although he wasn’t privy to the different iterations of Johnson’s script for The Last Jedi, a document protected on a laptop with permanently-disabled internet connectivity, Segan knew about Knives Out long before the filmmaker offered him a role tailor-made to his evolution as an actor. “This was an idea that he had been talking about for years of giving Agatha Christie the treatment that he gave Dashiell Hammett [ with Brick],” Segan told Nerdist. “I think I read the first draft and the third draft, and then it didn’t change much after that – because the vast majority of his process is happening in his brain. He carries around these little black notebooks, and nobody really knows what’s in them, but he’s got dozens and dozens of them. I believe one day I’m going to get a peek at them and it’s just going to be little drawings of dicks.”

“But whatever he is doodling in them, at the end of that process he comes out of them ready to write a script in a matter of weeks,” Segan explained. “And in the case of Knives Out, it really is a murder mystery and it’s ‘howdunit’ as much as a ‘whodunit’, and it sweeps you up in it. And it was a really nice thing to have this other aspect, the social commentary, and the humor kind of surprised me in a weird way.”

Segan played a role in every film Johnson has made—drug addicts and disreputable types, not counting his short-lived turn as Rebel pilot Stomeroni Starck in The Last Jedi. He admitted he was surprised by the character Johnson asked him to play in Knives Out, a cop who’s shepherding detective Benoit Blanc ( Daniel Craig) through his unconventional investigative process to find the murderer of mystery novelist Harlan Thrombey (Christopher Plummer).

“He said, do you like this concept? This guy is sort of funny and is not like a murderer—he’s kind of a goof,” he remembered. “And I was like, you mean like a dad? I’d just had a kid, so I was like, I get to play like a fun dad? And I was like, all right. Though did he write me the role of the fun dad or did I just grow into it? I don’t know.”

Though Segan was one of the production’s veterans in terms of collaborating with Johnson, he worked with some true icons of the stage and screen, as well as a few up-and-comers, like Lakeith Stanfield, he admits he felt starstruck sharing the screen with. “It was a little intimidating because Lakeith was and is one of my favorite actors, especially because he’s a guy who hasn’t been a favorite actor for my whole life like Jamie [Lee Curtis],” he explained. “But he’s has been my favorite actor for five years. And we both like weird stuff and are pretty out there in terms of opinions and yet we have a lot in common in our personal lives, so we were able to connect quickly and become friends and spend a lot of time together.”

“Lakeith and Daniel, we probably spent the most amount of time together out of work just hanging out,” he revealed. “A little bit of it was just proximity because for the Thrombey family, the folks that didn’t work every single day would often stay closer to town in Boston. So a handful of us, me, Daniel, Ana, Lakeith were there the whole time and as a result it was often like, we have to get up for work in seven hours, so we might as well just keep it mellow. But the easiest way to become buddies with somebody else is to be stuck with them for a while and find out what makes you both tick.” 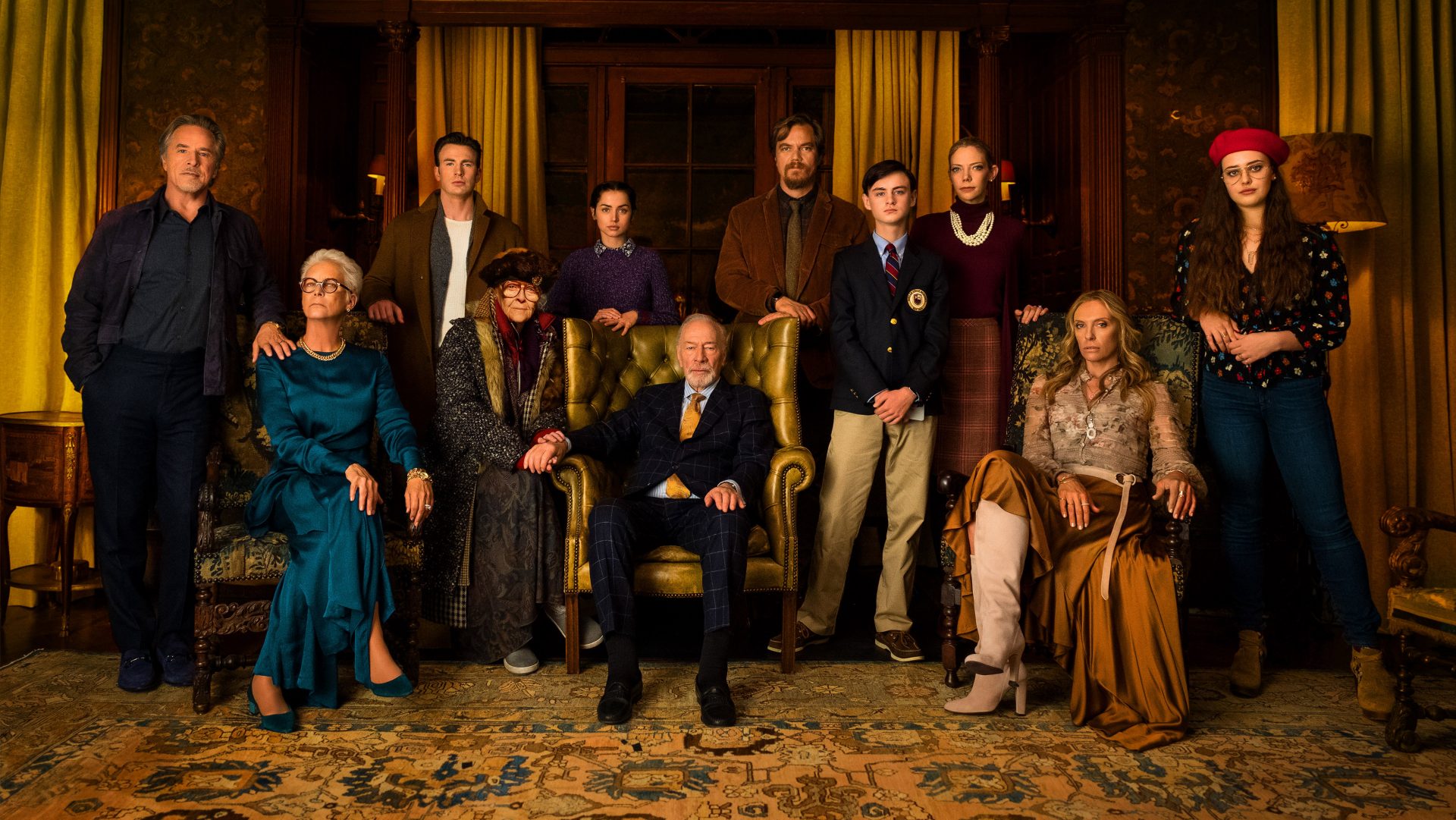 That said, Segan indicated that some of those older performers established a gratifyingly familial environment on set that lasted throughout the 40-odd-day shoot. “We shot in this big old house in Massachusetts; the people who owned the house had this little area in the basement with some chairs and nice places to sit and it was a little quiet,” he said. “And on the first day we blocked the scene, and then it was time to take a break while the crew set up the lights. And I think it was Jamie who was like, I’m not going back to these trailers. I’d rather sit in this cool house and hang out. And cut to the end of the day, all eight of the cast members who were working are sitting around in a circle in the basement of this house playing charades.”

“And that was the tone of the film,” he continued. “That sort of camaraderie is incredibly hard to find, but it really does make your working day very pleasant because you kind of don’t stop working. You’re sort of humming along cause you’re with these people who you look up to.”

That energy feels palpable on screen as well as an incredible ensemble bounces each character vividly off of one another, changing audience perceptions while appearing to have an absolute blast just mixing it up in each scene. In fact, Segan revealed that the collective sense of collaboration was so strong that it inspired an improvisation that generates one of the film’s biggest laughs. “We were getting towards the end of our run on Knives Out and there was this moment in rehearsal where Lakeith’s character interrupts Benoit Blanc as Daniel Craig is giving one of his big, eloquent, expositional stories,” he recalled. “And I was listening so intently to Daniel that I went “shhh!” and I shushed Lakeith! I thought it was so funny and so perfect that I’m telling Rian, man, you should get me shushing him, because that shit is real, man.”

Segan said that Johnson, who he characterizes as the best kind of director, a “benevolent dictator,” eventually relented and let the actor add his little flourish to the moment. “Finally at the end of the day Rian said, all right, go ahead and do the shush, because I know you find it really funny. And I did it. For like 15 years, I’ve been doing exactly what Rian tells me to do in his scripts. And I thought I had actually done the thing that you want to do, which is become so much this character I was playing that we kind of blurred the lines in a really fun way.” But even more than spicing up a complex and thrilling scene, Segan said he thrilled at the chance to truly add something to the filmmaker’s always brilliant, carefully-constructed visions—and more than that, to strike out almost unexpectedly in a bold new direction in his career.

“After playing in Rian Johnson movies for 15 years and then also being in like dozens and dozens of other movies, it’s hard for me to think of other examples where I have felt weirdly like I’m in it like I am in this one,” he admitted. “It’s strange to consider that I may have just spent the last 20 years playing rapists and murderers and drug addicts and like the worst people on earth. But in reality, I’m just kind of a goofy dad. Nobody saw that coming. I didn’t think the next stage of my career was going to be Reginald VelJohnson characters. And I love everything he has done! So I’m fine with going full VelJohnson.”

Knives Out is open now in theaters nationwide.