The One Era When Both JUSTICE LEAGUE and AVENGERS Ruled - Nerdist

The One Era When Both JUSTICE LEAGUE and AVENGERS Ruled

DC Comics’ Justice League and Marvel’s Avengers have had plenty of epic stories over the years. But curiously, these two series have almost never been great at the same time. Whenever Justice League is firing on all cylinders, Avengers usually lags in quality, and vice versa. All except for one glorious time in history, when everything came together creatively and both comics were the best they’d ever been. This era started circa 1997 and lasted until the early 2000s. During this time, writer Grant Morrison and artist Howard Porter relaunched the Justice League as JLA; meanwhile, Kurt Busiek and George Perez jumpstarted a new Avengers series. But before we get to their epic ’90s rebirth, a bit of a history lesson on these two rival teams. 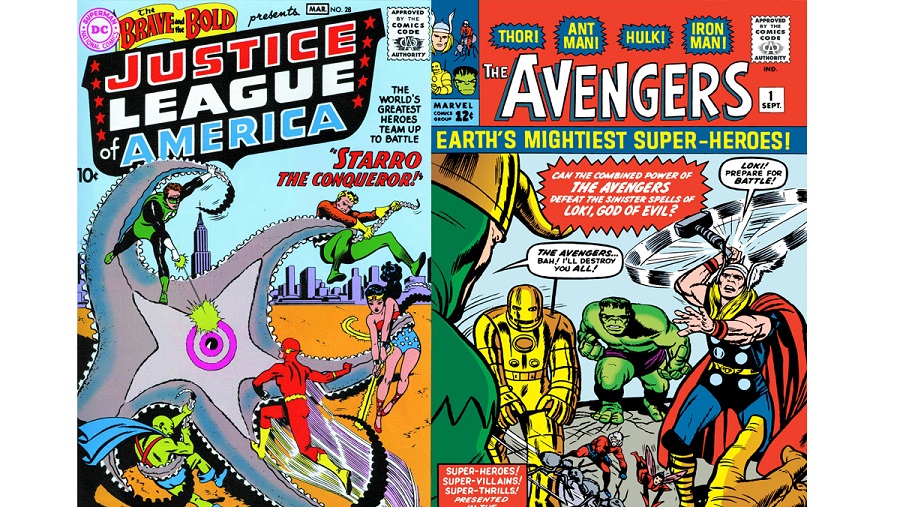 Wherever your super team loyalties lie, make no mistake: there would be no Avengers without Justice League. DC’s team debuted in 1960, showcasing all their biggest heroes together for the first time. Yes, there had been a Justice Society back in the ‘40s, but “big guns” Superman and Batman were considered too popular, and a team book was “beneath them.” Justice League of America, however, included them both, and Wonder Woman too. It really was an all-star team in a way comics hadn’t seen before. And it was a huge seller for DC.

A year later, Stan Lee and Jack Kirby created their own team for the newly rebranded Marvel Comics as a response to the sales success of the Justice League of America. That team was the Fantastic Four, and the rest is Marvel history. The FF could not have been more different from the JLA, and as a comic was vastly superior. Still, Marvel wanted a more direct response to their rival—a comic with all their biggest heroes together. So in 1963, the Avengers were born. 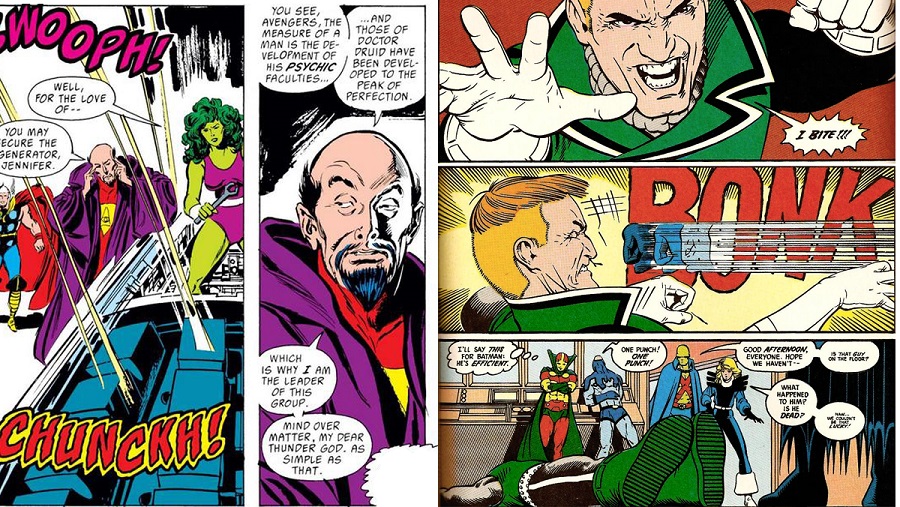 The two teams were exactly the same in concept, but totally different in execution. JLA had a very steady roster for its first two decades. New heroes joined the lineup, but few ever left (at least not for long). From the get-go, Avengers had a rotating door of heroes from all over the Marvel universe. The JLA characters all seemed to have the exact same personality, while Stan Lee (and later Roy Thomas) made all the Avengers as distinct from one another as possible.

In the ‘70s, the Justice League of America comics tried to get edgier and a bit more Avengers-like. Suddenly, the liberal Green Arrow would get into personal conflicts with the conservative Hawkman, and Wonder Woman would have to prove her worth to rejoin the team after losing her powers. But as a title, The Avengers still ruled the roost. Later on in the ‘80s, both teams filled their ranks with D-list heroes instead of a line-up of heavy hitters. Justice League leaned into the comedy of this, to great success. Lots of laughs were mined from stalwarts like Batman and Martian Manhunter butting heads with a bunch of newbies. Meanwhile, most Avengers fans would like to forget the era of team leader Doctor Druid, an unlikable wannabe Doctor Strange. But then the stars aligned. In the late ’90s, both titles underwent a renaissance. 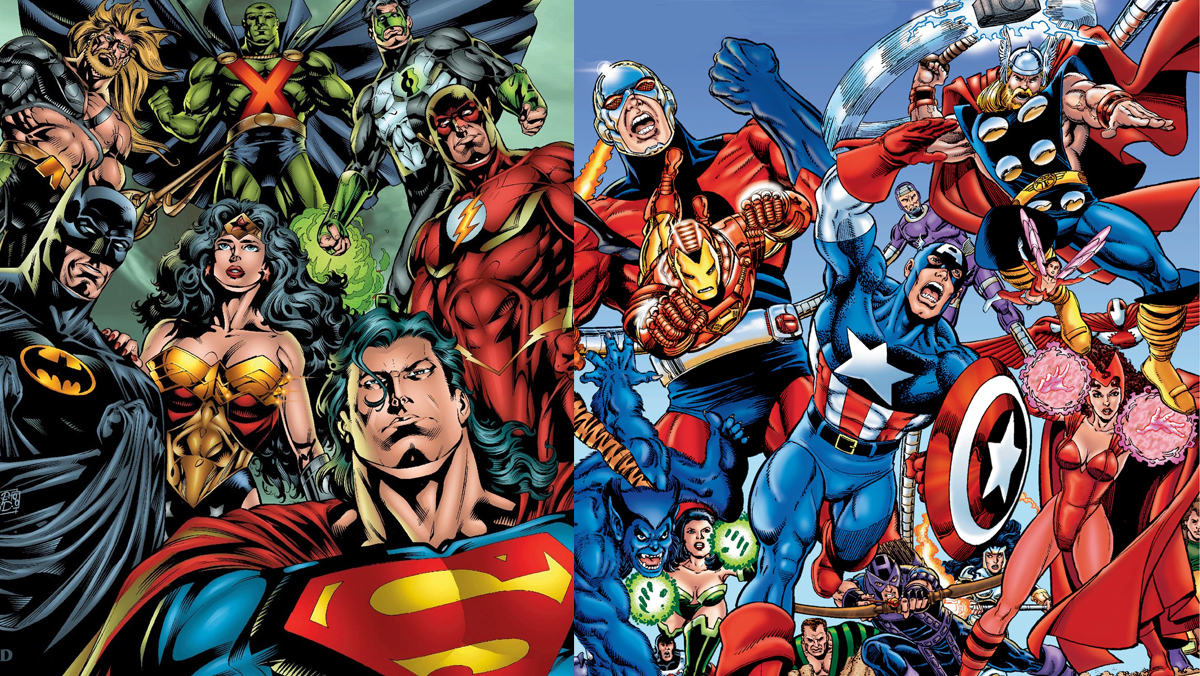 In the early ’90s, comic book sales went through the roof as a speculator boom tore through the comics industry. Every successful comic became a “franchise,” and that included Justice League and Avengers. This resulted in cheesy spin-off books like Extreme Justice and Force Works diluting their core brands. But after a boom there always comes a crash. When the comic book industry started to get back on its feet in the late ‘90s, the key words were “consolidation” and “back to basics.” For Justice League and Avengers, this was the best thing that could have ever happened.

In 1996, all the ancillary Justice League books were canceled in favor of one comic: JLA. Writer Grant Morrison, then known for offbeat titles like Doom Patrol and The Invisibles, came on board what would become DC’s flagship book. For the first time in almost 12 years, JLA would feature the seven biggest icons of DC together again, reframed as a modern day version of the Greek Gods of Olympus. The stories were widescreen affairs, with the team fending off Martian invasions and Lex Luthor’s hostile corporate takeovers of reality. Superman even wrestled with a heavenly angel on the moon for the sake of all creation. 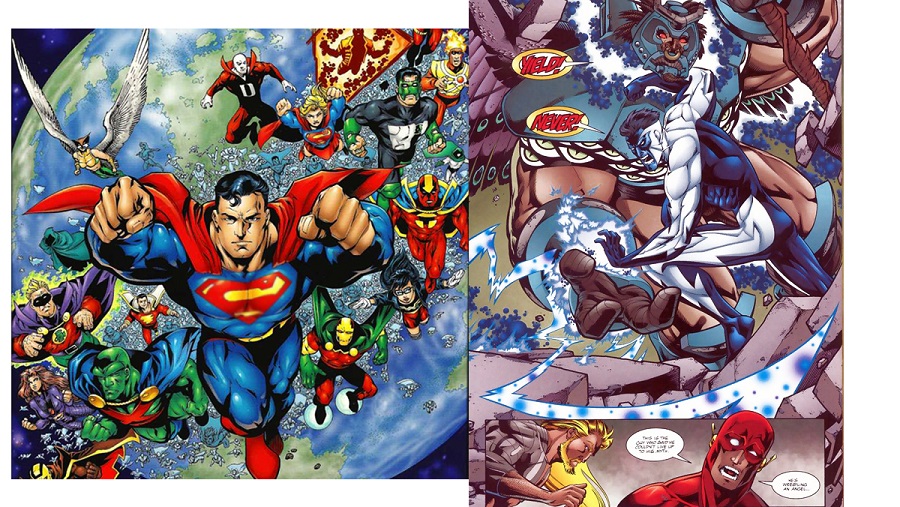 Meanwhile at Marvel, writer Kurt Busiek and artist George Perez reunited the trio of Captain America, Iron Man, and Thor, and returned long missing fan-favorites from the team. He brought back epic high stakes stories while remembering that the Avengers was primarily an interpersonal soap opera, in a way that JLA was not. The Busiek/Perez run had Earth’s Mightiest Heroes face off against reimagined classic villains the Squadron Supreme, and delivered the best Ultron story ever. But none of this big adventure got in the way of the series’ key element: personal interaction (and romances) between the characters. 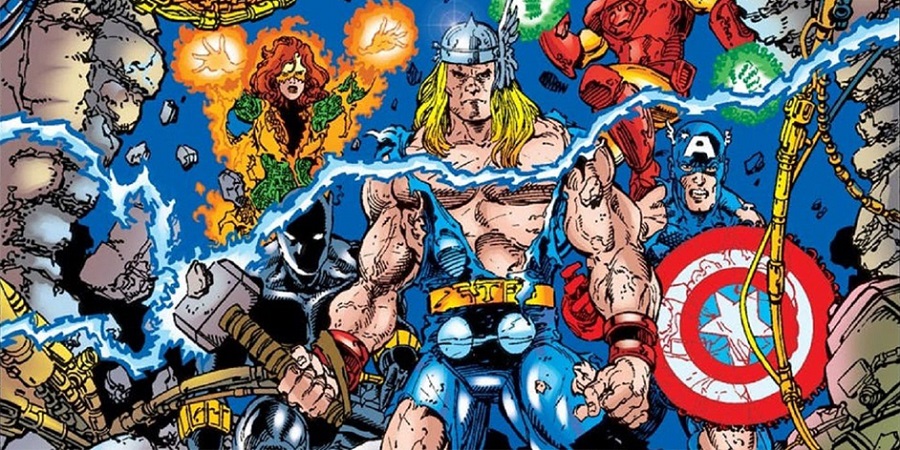 Both comics made the smart move of recognizing which character rosters made their teams iconic, while also broadening their line-ups for modern day. Sure, JLA primarily consisted of DC’s biggest icons once again, but Morrison also brought in new characters like the heroic Guardian Angel Zauriel. Busiek kept to the most famous Avengers, but remembered that a conveyer belt of incoming new heroes is part of what made the Avengers so great. The word “epic” is often thrown around these days, but both comics deserved that label during this period.

The culmination of this era came in 2003, when Marvel and DC released the long awaited crossover extravaganza JLA/Avengers. The Avengers dream team of Busiek and Perez were behind this one, and it was a celebration of everything that made both super teams so great. It marked the last time both books would both be that great at the same time ever again.

This isn’t to say that there have not been good Justice League or Avengers comics since. Quite the contrary. Brian Michael Bendis’ New Avengers run was pretty stellar, as was Jonathan Hickman’s. Writer Mark Waid had a solid JLA run after Grant Morrison, and Brad Meltzer’s brief Justice League of America revival was also memorable. And Scott Snyder also channeled his inner Morrison for his recent Justice League run too. But in my opinion, none have quite reached the heights of either book’s run in the late ’90s. They either didn’t have the pitch perfect team rosters or the storylines weren’t as ambitious. So even the best of the bunch fell a bit short of that ’90s greatness.

The influence of these eras on their media incarnations was also pretty significant. The Justice League Unlimited animated series from the early 2000s drew a lot of inspiration from Morrison’s comics. This includes naming the team’s base “The Watchtower,” and expanding the team’s roster to include almost every DC hero. And although The MCU Avengers are just as heavily influenced by comics like The Ultimates and Jonathan Hickman’s run with Earth’s Mightiest Heroes, there’s more than a bit of Busiek/Perez DNA in there as well. If you love those versions, you’d be doing yourself a favor in doing a deep dive into this stellar comic book era for both iconic super teams.