The Justice League has had a bit of a rough go of it these past few years at DC Comics. On one hand, the team’s long awaited big screen debut did not exactly set the world on fire. And while their recent comic book incarnations these past few years have ranged from adequate to pretty darn good, something has been missing from the League for a while now—something that has kept them from true greatness. But with this new series relaunch from superstar writer Scott Snyder and fan favorite former Marvel artist Jim Cheung, DC has lit a fire under the League’s collective butt, and their first issue of Justice League is everything you love about the team, but cranked up to 11! Writer Scott Snyder, whose five-year run on Batman is among the best ever for that character, is following up on events he introduced in his Dark Nights Metal series, as well as his recently concluded Justice League: No Justice mini-series. That event introduced the idea that the Source Wall at the end of the universe has cracked, and that all kinds of dangerous energies are pouring out of it into the universe. This causes a new iteration of the League to form, led by long missing member the Martian Manhunter.

Issue #1 opens in medias res, with the League being telepathically coordinated by J’onn into fighting an insurmountable surprise foe—the first of several in this issue. We get all the amazing splash pages that Jim Cheung became famous for while at Marvel, and they’re simply gorgeous. Cheung made name for himself  illustrating books like Young Avengers, but he’s taken everything he learned there and applied it here, the original team book. 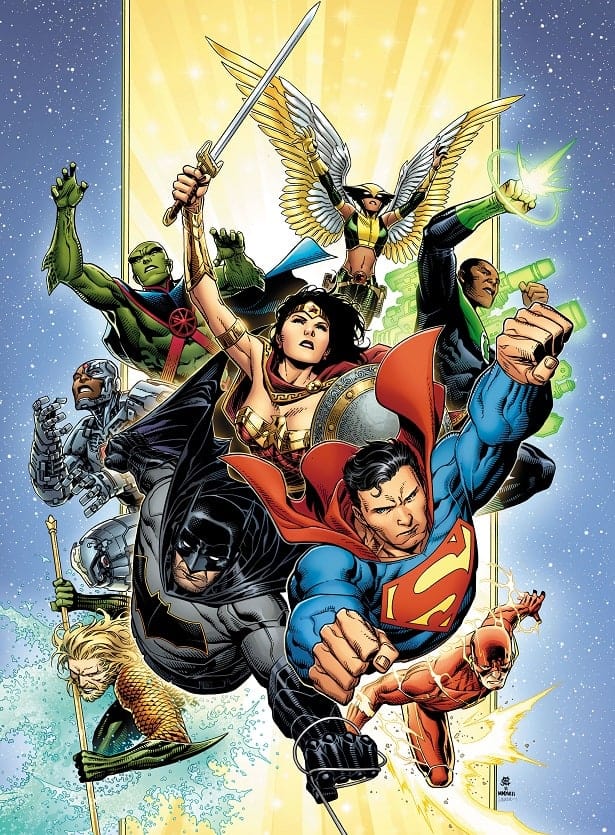 With this issue, we see that Snyder is very liberally borrowing from the very best eras of the League’s past, chiefly the four-year run by Grant Morrison, along with the Justice League Unlimited animated series. From Morrison, Snyder has borrowed the notion of a core membership made up of DC Comics’ biggest heroes, taking on the kinds of threats that are simply too huge for any one hero to take on alone—threats so big they are literally mind-boggling in their scope.

Snyder has expanded Morrison’s “Big 7” to a “Big 9,” but that’s because he recognizes that the League’s other most famous recent incarnation, the animated series, added Green Lantern John Stewart and Hawkgirl to the line-up, as the kids who grew up with that cartoon expect to see those particular characters on the team. Another concept borrowed from JLU is the idea that all the other heroes from the DCU are essentially “backup” for the main team, and called upon when needed. This leads to a ton of cameos from other famous DC characters, who are essentially all Leaguers now too.

But despite being influenced by the best aspects of the League’s storied history, this is definitely still a Scott Snyder jam. A lot of the sense of mystery he became so famous for in Batman stories like “ The Court of Owls” is on full display here, just taken to a more cosmic level. If you loved his iteration of Batman, he is very much still that Batman here, only you get the joy of seeing him play against his teammates. (There is one particular moment where Bats is trying to hide something shady from the Martian Manhunter, a telepath, and it results in a fairly hilarious character moment that showcases both heroes in their purest forms.)

If I have one complaint about this issue, it’s that it shows how DC’s continuity is still super messed up post- Rebirth. For example, the Martian Manhunter suggests he’s been away from the League for a long time and is just now returning, but in the New 52 continuity, which is all still in play as far as I know, J’onn was never a member of the main team. His founding member status was taken by Cyborg, who is still here. Also, a Hall of Heroes in the lobby of the League’s HQ showcase a lot of characters from the team’s past who are clearly from the pre- Flashpoint continuity. None of this is really Snyder’s fault, but it would be nice for DC to address their screwed up continuity sooner rather than later.

In the final analysis, Justice League #1 offers everything you could want from a JL comic, and promises a big bright future for the team. Here’s hoping Snyder and Cheung have as legendary a run as Snyder and Greg Capullo did on Batman. The Justice League deserves it.

Justice League #1 will be available at comic book stores on Wednesday, June 6, 2018.