How THE LOST BOYS Created the Teen Vampire Genre - Nerdist

How THE LOST BOYS Created the Teen Vampire Genre

With the sad loss of director Joel Schumacher, many film fans are reminiscing about his pair of Batman movies, or his Brat Pack films like St. Elmo’s Fire. But for horror fans, the man will always be legendary for 1987 film The Lost Boys, which turned the vampire genre on its head. The Lost Boys proved to be highly influential, almost as much as Bram Stoker’s Dracula was nearly a century earlier.

And make no mistake: the version of the film we cherish and love today is 100% because of Joel Schumacher’s influence. Before he came on board, the film was an almost entirely different beast.

For those of you who still haven’t seen this classic, The Lost Boys tells the story of teenagers Michael and Sam Emerson (Jason Patric and the late Corey Haim, respectively) who move to the beach town of Santa Carla, California with their recently divorced mom (Dianne Wiest). Soon, the boys get tangled up in the town’s secret world of sexy undead youth. Mixing comedy and horror with the popular teen movie genre, The Lost Boys has since become a cult classic.

Originally, The Lost Boys was meant to be directed by Superman and The Goonies director Richard Donner. Given his success with Goonies, the film was supposed to be a creature-feature version of that 1985 family-friendly hit, with a bunch of little kids in the main roles. It would have been much more of an on-the-nose version of the “lost boys” of Peter Pan, making the reference to J.M. Barrie’s s band of wild young boys who never grow up quite literal. 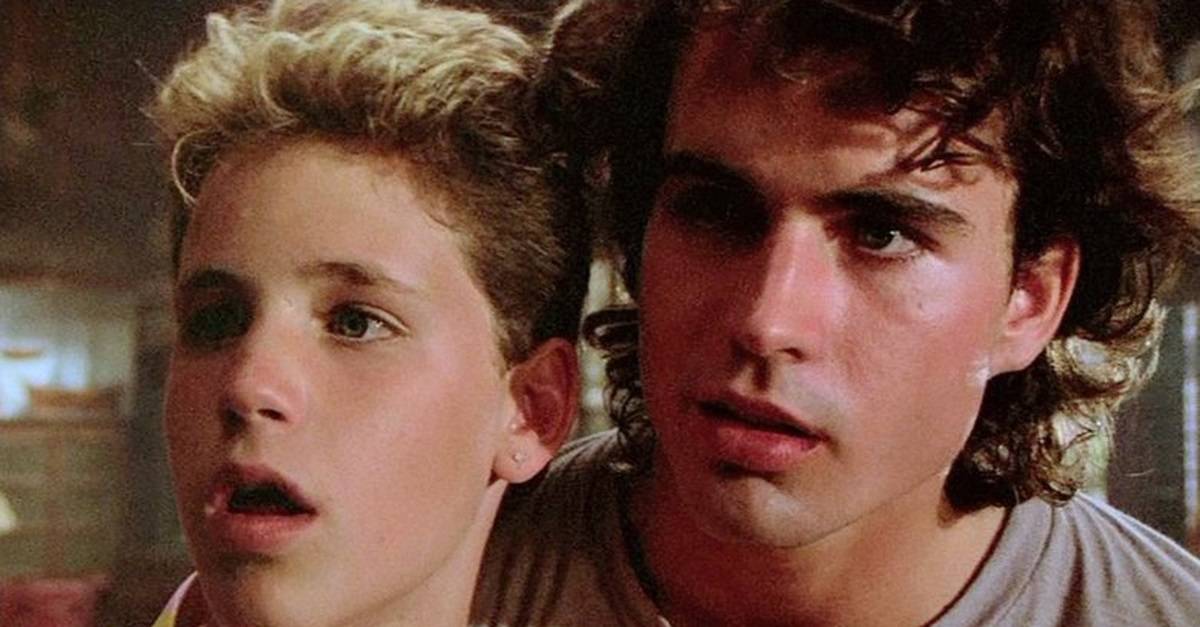 But once Joel Schumacher came onboard to direct after Donner stepped back to produce, he had no interest in doing a kid’s adventure movie. He wanted an R-rated horror film, even though the final film did retain many of the comedic elements of the original concept. To make these changes, he brought in future Indiana Jones and the Last Crusade writer Jeffrey Boam to do a top-to-bottom rewrite of the original script by Janice Fischer and James Jeremias, with only the story’s original broad strokes remaining. His main mandate: sexy this script up.

In the audio commentary for The Lost Boys, Schumacher said that for him, the lure of the vampire mythology is that they are eternally young and sexy. Not exactly something you can evoke with a bunch of elementary school kids. The titular “boys” were still eternally young of course, but were definitely older teens. Only the character of child vamp Laddie remained, perhaps as a nod to the original script. But aside from him, the rest of the film’s vamps were the standard Hollywood twenty-somethings playing teenagers. 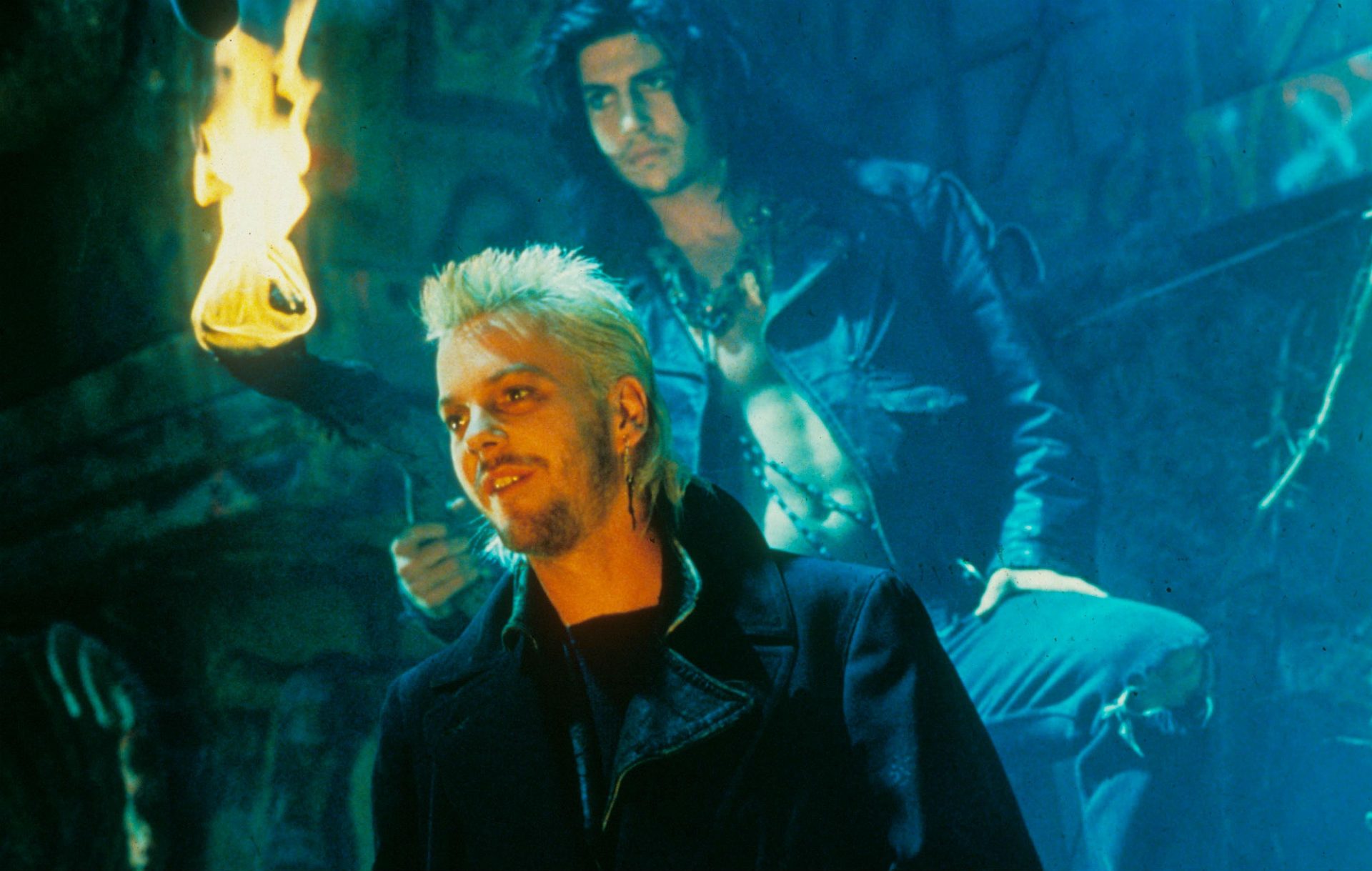 In the book Pretty in Pink: The Golden Age of Teenage Movies, it’s suggested that Schumacher took a cue from author Anne Rice’s popular novel The Vampire Lestat, which positioned its undead lead characters as “the rock stars of their day.” We never see the vamps played by Kiefer Sutherland, Alex Winter, and the other boys in the film actually rockin’ out, but they sure do look the part. They might as well be in an ’80s hair metal band. Another nod to Rice’s work is how Michael is a reluctant vampire, created by a fair-haired vamp who is unrepentant in his bloodsucking, shades of Interview with the Vampire’s Louis and Lestat. 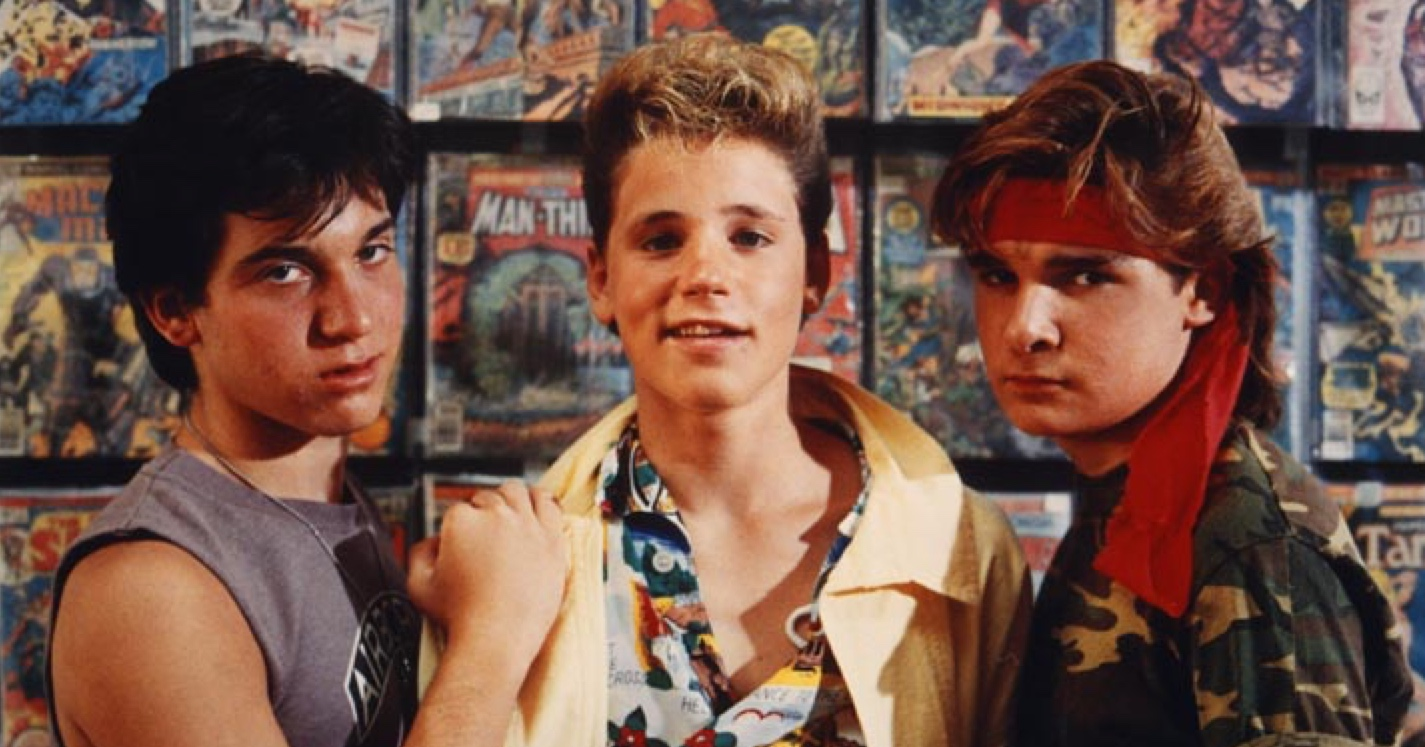 With the little kids concept gone, Schumacher also reinvented the Frog Brothers, played by Corey Feldman and Jamison Newlander, from “chubby 8-year old Cub Scouts” into teenagers with a Rambo fixation. Instead of a little boy, the Star character was now played by Jami Gertz, and was a love interest for the lead character of Michael Emerson. The sexiness of it all was played to the hilt, and there was now enough blood n’guts to earn that R-rating, making it a true horror film.

The Lost Boys opened in the summer of 1987, and played to the same audience eating up John Hughes’ teen movies. With a tag line of “Sleep all day. Party all night. Never grow old. Never die. It’s fun to be a vampire,” the movie was an instant success with teens. Only budgeted at $8.5 million, it wound up making $32 million at the box office that summer. That’s decent for an R-rated horror movie today, but thirty plus years ago, that qualified as a very big hit. The movie is also one of Warner Brother’s biggest-selling home video titles ever. 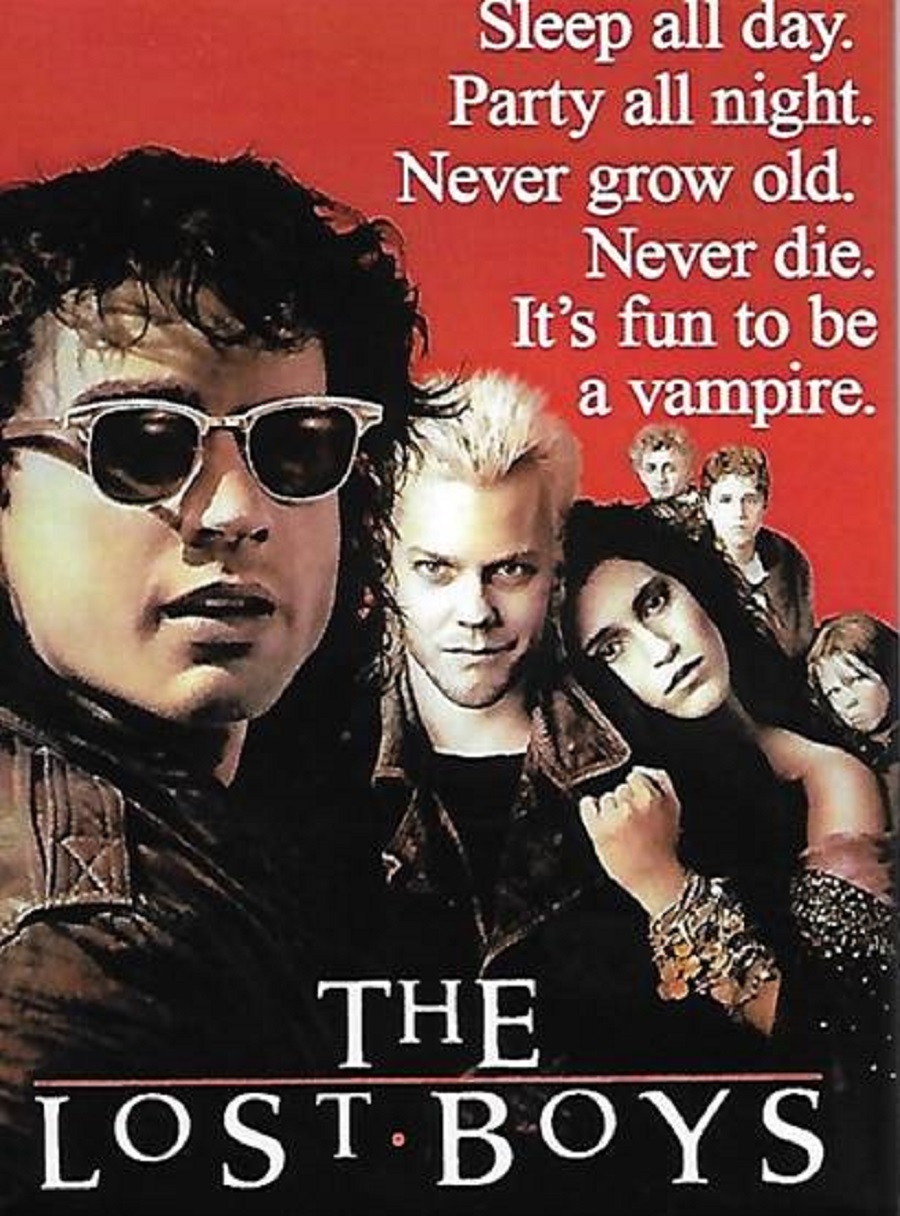 The legacy of The Lost Boys continues to this day. The entire genre of sexy teenage vampires (and vampire hunters) can be traced back to Schumacher’s film. When Joss Whedon was creating Buffy the Vampire Slayer, he admitted that the movie was a big influence. Lost Boys’ Santa Carla is a small California town, that is “the murder capital of the world.” The adults seem oblivious as to why, but the kids in town recognize there is something strange afoot when no one else does.

The town of Sunnydale on Buffy is almost exactly the same as Santa Carla, with Buffy Summers and her high school friends the only ones who recognize their town’s vampiric evil for what it really is. The vampire’s lair in Santa Carla is an old hotel that was buried underground  after the San Francisco earthquake of 1906. The vampire lair in season one of Buffy is a broken down church, buried underground by that very same quake. None of these things are coincidences.

That’s not the only way the film influenced Buffy. In an interview with Salon, Whedon said, “The idea of [the vampires] looking like monsters and then looking like people, that was in The Lost Boys, and that was very useful for us. You could have somebody fool you, or someone like Angel seem like he’s not a vampire and then he is one.” Aside from Angel, the character of Spike (James Marsters) was also heavily influenced by Kiefer Sutherland’s character of David. When conceptualizing Spike, Whedon told Entertainment Weekly “There’s a little Billy Idol, a little Kiefer Sutherland in The Lost Boys, and every guy in a black coat.”

But Buffy was hardly the only major pop culture legacy that The Lost Boys would have. You see its influence in later series where teenage vampires struggle with their monstrous nature, like The Vampire Diaries and even the Twilight books. Sure, Anne Rice did this broody, self-hating vampire archetype first in her Vampire Chronicles novels, but it was The Lost Boys that united that concept with a teenage mindset.

Soon, the influence of the film will come full circle, as a Lost Boys TV show is in the works for the CW. Here’s hoping that the magic ingredients that Schumacher created for the film back in the ’80s extends itself well into television. Even if the TV show never comes to fruition, the long legacy of The Lost Boys is already assured.