The 4 Biggest Game Changers in THE HALF-BLOOD PRINCE - Nerdist

The 4 Biggest Game Changers in THE HALF-BLOOD PRINCE

Based on the penultimate book of the Harry Potter series, Harry Potter and the Half-Blood Prince needed to expertly set up the epic conclusion to Harry’s story. The Half-Blood Prince greatly delivered, delivering some truly amazing game changers to the saga. In honor of the film turning 10 on July 15, we wanted to take a moment to honor these major moments from the film. 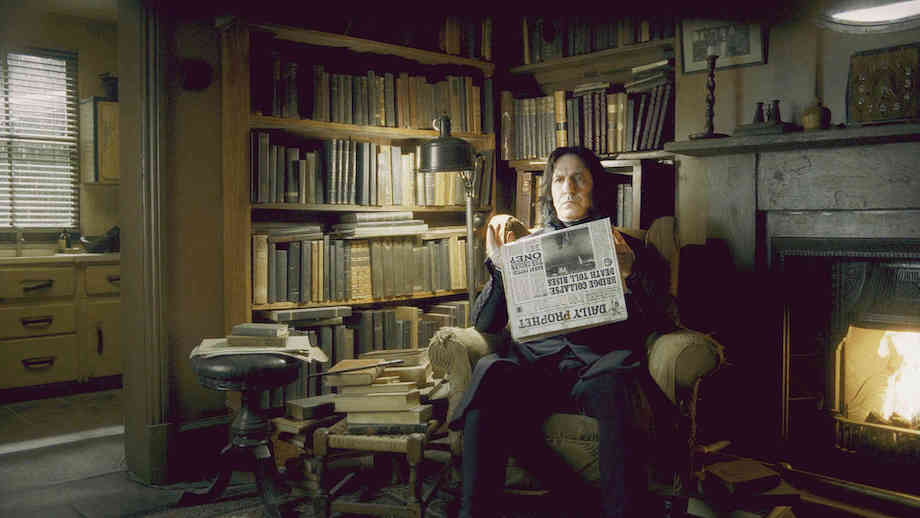 In both the previous books and films, Snape was an antagonist to our lead heroes, and especially to Harry. Despite being a part of the Order of the Phoenix, Snape wasn’t a huge fan of the boy who lived. Dumbledore and Professor McGonagall’s protectiveness didn’t help either, so Snape used certain tactics—like humiliating Ron and Harry in Potions class—to antagonize the kids. As a result, Snape wasn’t a character we completely trusted, or liked.

With the Half-Blood Prince, Snape’s allegiances were further called into question, as well as his morality. In the opening scene, we watch Snape pledge loyalty to Voldemort and the Death Eaters, insisting to the Malfoys that he is on their side. He makes an Unbreakable Vow to protect and assist Draco in his special Death Eaters mission. We also learn that Snape was the one that told Voldemort about the prophecy. This means he’s partially responsible for the death of Lily and James Potter.

Oh, and it turns out that the mysterious half-blood prince is Snape! We learn this after a heated fight with Harry after Dumbledore’s death. Even though the series is about Harry, this specific installment is also about Snape, and who he is. We don’t feel like we should trust him, and we feel as angered as Harry is by his decision to kill Dumbledore.

When it comes to The Deathly Hallows, our mistrust of Snape dissipates as his true allegiance is revealed. We learn that he loved Lily Potter and felt complicit in her death. His grief is what ultimately caused him to leave the Death Eaters and join the Order of the Phoenix. In order to make his arc redemptive, to us and to Harry, Snape needed to be in a truly low place. The Half-Blood Prince provides that fall, so he can rise up in the final act. 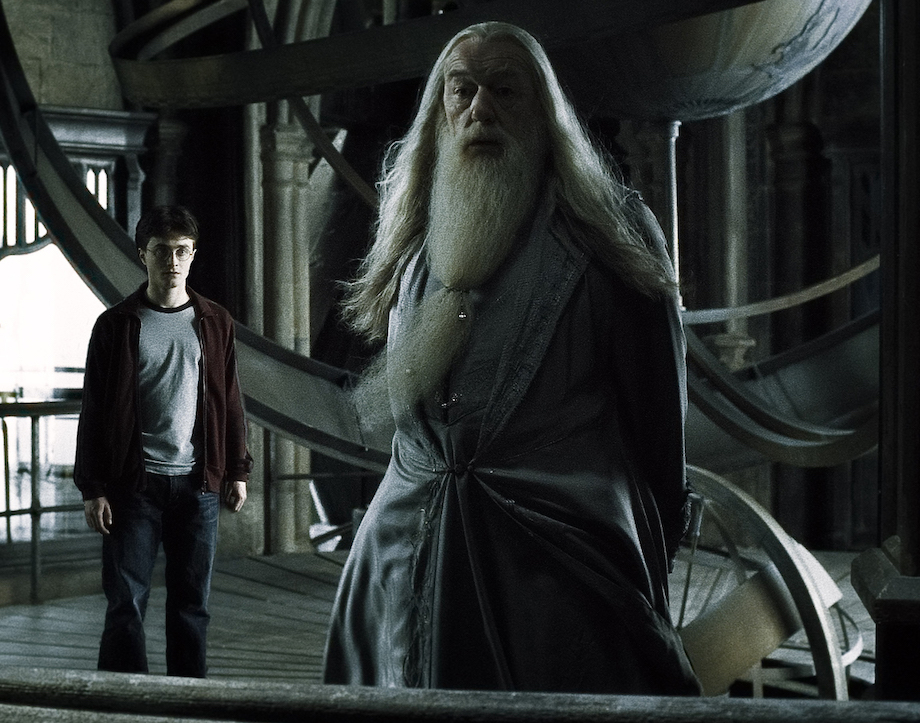 Speaking of Snape, we felt absolutely gutted when he killed Dumbledore. Snape wasn’t meant to kill the headmaster—Draco was, but couldn’t bring himself to do it. To us, it looked like Snape was fulfilling his Unbreakable Vow to the Malfoys and the Death Eaters. We couldn’t believe Dumbledore, a father figure in Harry’s life and a guiding force in the fight against Voldemort, was gone. How would Dumbledore’s army go forward, and what about Harry and his journey to find the horcruxes?

Dumbledore’s death left us gobsmacked—we didn’t expect to see Dumbledore die so soon, especially at the hands of his friend Snape. Snape’s killing blow only intensified the emotional blow, and like Harry, we wanted to attack the potions professor. We had already had dark moments in the series, but this moment was perhaps the most disturbing.

Plus, we didn’t know why—at the time—Dumbledore let it happen. Similar to Snape’s characterization, The Half-Blood Prince left us an unresolved thread, making us unsure of Dumbledore’s final moments. Finding out Dumbledore asked Snape to kill him in The Deathly Hallows aids Snape’s character arc, and, in ways, provides us with closure. Through Snape, Dumbledore was still able to help Harry, and the two did meet again, in limbo.

Dumbledore’s death left us as devastated as Harry, Hermione, and Ron at the end of The Half-Blood Prince. However, it did make us even more excited to see Harry take down the Dark Lord once and for all.

Most important plot-wise was the discovery of the horcruxes and how they function. Using Slughorn’s real memory, Harry and Dumbledore discover that Voldemort learned how to make horcruxes from the professor. The two deduce that in order to achieve immortality, Voldemort put his soul not into one object, but six of them. Lucky for them, two of the items were destroyed—Tom Riddle’s diary and Marvolo Guant’s ring—but the rest of them were still out there.

With this information, we not only learn how Voldemort survives, but also, how he can ultimately be defeated. Knowing that there are other objects out there also sets up the plot of The Deathly Hallows—the discovery and destruction of said horcruxes. We also learn that Voldemort intended to make seven of them, which creates an air of mystery as to what happened to the final one. We get the eventual payoff in The Deathly Hallows when we learn that Harry inadvertently became the seventh horcrux.

This piece of lore is great because it serves as a callback to previous events, like Harry destroying the diary in The Chamber of Secrets. More importantly, it provides us with exciting speculation about what the final horcruxes are, and how they will be destroyed. 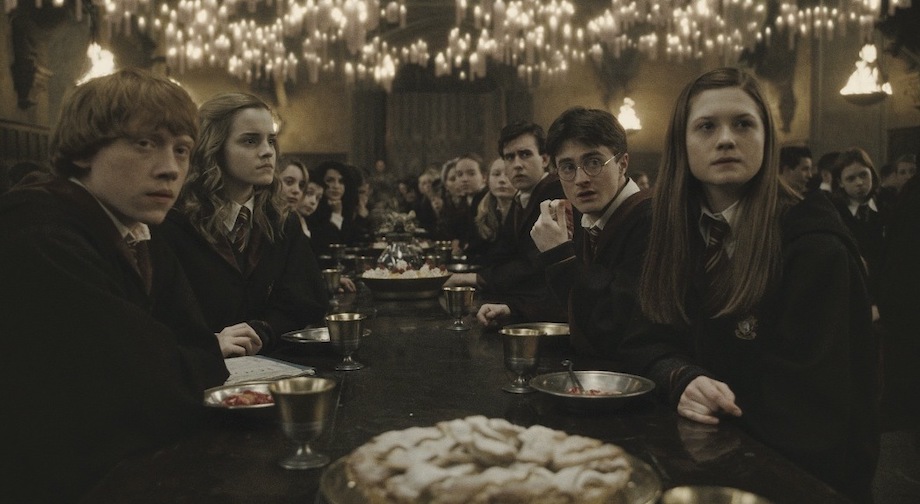 OK, yes, this isn’t as high-stakes as the horcruxes or Dumbledore’s death, but the film does provide us the inklings of the series’ final romantic pairs. Sure, we had seen our heroes paired off with other people before, like Harry and Cho Chang. However, this is our first inkling at who could end up with each other at the end of the series.

Harry immediately picks up on the growing attraction between Ron and Hermione. Ron initially cozies up with Lavender Brown, but the relationship doesn’t last when he utters Hermione’s name while incapacitated. While this is happening, we also watch Hermione struggle with jealousy about Ron’s relationship. Like normal teens, Ron and Hermione have a difficult, messy time understanding their emotions. When they finally get together in The Deathly Hallows, it’s a relief to see them finally get together.

With the love triangle over, Harry also finds his future love in Ginny. He admits to Hermione, when she’s jealous about Ron and Lavender that he likes his best friend’s little sister. He and Ginny also have their first kiss in the Room of Requirement in The Half-Blood Prince. The Deathly Hallows will be about the final battle against Voldemort, so it makes sense to start the romantic foundation in this film. When the battle is over, their eventual pairings don’t seem so sudden, thanks to this groundwork.

The Half-Blood Prince needed to not only entertain, but also set up the major story beats for the final films. The sixth film ultimately succeeded in surprising us, and we’ll never forget how it made us feel. The shock of these moments still feel fresh, even 10 years after it graced the silver screen.